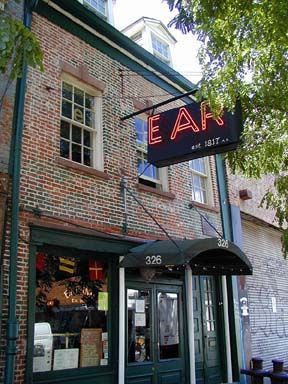 There are those who claim that James Brown, the former slave who built the Federal-style house and shop at 326 Spring Street, was a Revolutionary War veteran and former aide de camp to General George Washington.  Census records and common sense make that claim hard to substantiate (the 55-year old Brown who sold the house in 1830 would have been 8 years old at the end of the war).  Whatever the case, Brown had sufficient means to build a home and open a business; and he erected his two and a half story brick Federal house approximately five or six feet from the Hudson River around 1817.

The area was then known as "Lower Greenwich" -- being just south of Greenwich Village -- and was a working-class, mixed-race neighborhood filled with homes similar to Brown's.  His was a comfortable home with a gambrel, dormered roof and Flemish-bond brickwork, assessed at the staggering amount of $2,000 in 1817.  Stone keystone lintels capped the windows.  Brown opened a tobacco shop in the first floor, catering to the sailors and dock workers along the river.

In 1830 Brown sold the building and it became two subsequent apothocaries and a grocery.  Robert Nixon and Charles Lowere took over the building in 1851 and shared the shop area.  Nixon was a bootmaker and Lowere a "packer."  Neither lived on Spring Street and the rooms upstairs were rented out.

The area was bustling with river-related shops and businesses housed in similar buildings -- selling oysters, crockery and tins for example.  By 1870 George Hays, with his wife and daughter, lived in the building while he ran his crockery business from the shop.  Two boarders, or possibly employees, also lived there.

By now landfill had made 326 Spring a block and a half from the river.   Piers were added and improved and ship traffic on the Hudson was dense.  Vessels left Spring Street piers for California and Asia and longshoremen and sailors filled the streets.


For that reason in 1890 Thomas Cloke, an Irish immigrant, purchased the building and opened a tavern.  Upstairs William Haskins, a tobacco stripper, and his family lived.  Things went well enough for Cloke until 1919 when he recognized that the 18th Amendment to the Constitution might very well be passed, outlawing the sale of liquor.  Cloke sold the building that year, not a moment too soon.  The Amendment was passed on January 16.
Undaunted, the new owners opened a "restaurant" and continued serving alcohol.  The upstairs, reportedly, was used as "a boarding house, a smuggler's den and a brothel."  When Prohibition was repealed, the speakeasy continued on as a tavern but for years never hung a sign -- simply being known as "The Green Door."
In the 1970s Columbia student Richard Wayman finagled a deal with the bar owner to live upstairs for a small rent while doing repairs on the building -- which by now exhibited the bright neon sign BAR outside.  Wayman, who later became publisher of a music magazine "Ear," took over the lease in 1977 with two partners.  He bought the old house in 1979.


With a can of black paint he covered parts of the neon tubes so that the old sign now reads EAR.
Over the years Wayman made seriously-needed structural repairs to the building.  In the sandy basement -- reminiscent of when the house sat on the shoreline -- old crocks from the Cloke era stamped "326 Spring St." surfaced

Amazingly, to the right of the door an ancient night shutter still hangs; once used to cover the shop windows after closing.  In the attic of the peg-and-beam constructed house are charred axe-hewn beams which prompt some historians to feel that the James Brown House was constructed partially of beams salvaged from the Great Fire of 1776.

The New York Landmarks Commission, in designating the James Brown House a landmark, noted it as "a modest example of an early Nineteenth Century Federal house with some of its original architectural features, and that after a hundred and fifty years, it is still serving a useful purpose and that it adds charm, intimate scale, and a provocative change of pace to our city life and scene." 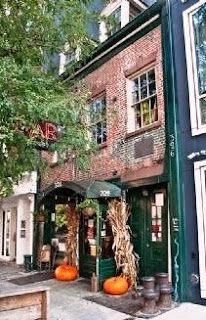 Whether James Brown fought in the Revolutionary War is irrelevant.  What is important is that his 1817 house still stands, a rare relic of the Federal period.
Posted by Tom Miller at 1:15 AM