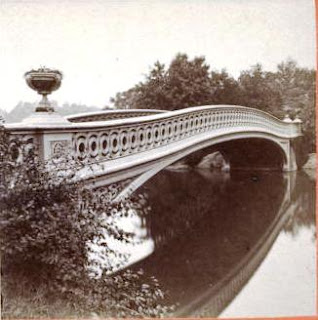 As Central Park was being planned in the 1850s, the list of items to be designed by Calvert Vaux and his assistant Jacob Wrey Mould grew longer and longer.  On that list was a bridge across the lake to connect the Ramble with Cherry Hill.  The commissioners envisioned a suspension bridge; a minor craze for these having swept the country starting a decade earlier.

Instead, a compromise was reached with a low-rising cast iron bridge the graceful arch of which resembled an archer's bow, hence the name.

Problems had to be overcome from the start.  For one thing, the northern bank is much lower than the southern side.  Therefore the north abutment is necessarily higher.

A much repeated story was that because the cast iron would need to expand and contract with changes in temperature, cannon balls were integrated into the abutments to act as giant ball bearings.  Indeed, the expansion differential is as much as 2 inches between high summer and mid-winter. The roadway was constructed of South American hardwood which successfully allowed for expansion and contraction.

Rising nine and a half feet above the lake, Vaux and Mould's graceful sweeping bridge would be a masterpiece of Victorian design.  Intricate, interlaced pierced ornamentation leads the eye across the span.  Vaux contracted Janes, Kirtland & Co. to manufacture the ironwork.  These were good days for the firm.  While they were casting the span they won the contract for the Capitol dome in Washington, DC. 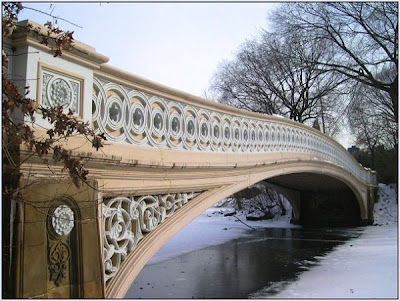 The bulk of construction was completed between 1859 and 1860; the last details being finished in 1862.

Bow Bridge was immediately a romantic destination for lovers and a favorite site for proposals.  It quickly became one of the most photographed spots in the Park, with hundreds of stereopticon card depictions being published.  It has been the constant subject of paintings for more than a century. 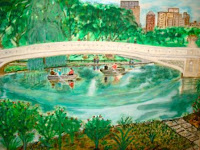 Sometime in the 1920s the large, ornamental Victorian urns at the four corners of the bridge were removed.

The bridge, undisputedly one of the most picturesque sites in New York, became the setting of countless movie scenes as the 20th Century wore on.  Movies like Highlander, Great Expectations, Spiderman 3, Autumn in New York, Keeping the Faith, Uptown Girls and You've Got Mail constitute just a fraction of the list. 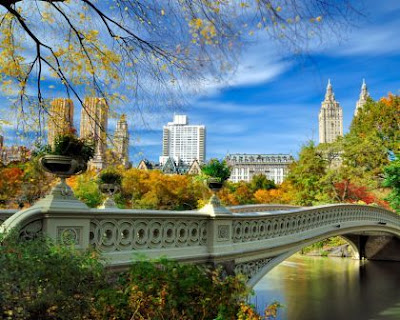 In the 1970s, with New York City on the brink of financial collapse and no funds available for the upkeep of the Park, Bow Bridge, along with so many other Central Park features, fell on hard times.  The graceful iron arch was seriously rusting and the stonework was in disrepair.  A $368,000 restoration, made possible by private donations, was done in 1974 by P.A. Fiebiger, Inc.  During the restoration, no cannonballs were found--causing much surprise and disappointment.

Then, in 2008, working off period photographs, artisans funded by the Central Park Conservancy created cast iron copies of the 3.5 foot high ornamental urns.  When they were installed, Bow Bridge looked as it did at its unveiling in 1862. 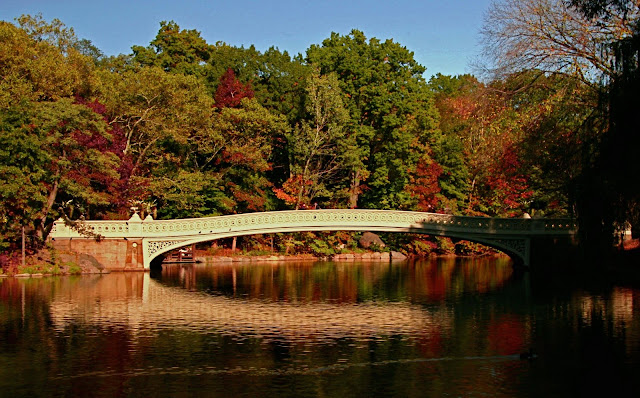 In February of 2010 New Yorkers, responding to a Department of Parks poll "Central to Your Heart," voted Bow Bridge the most romantic spot in Central Park.  The second oldest cast iron bridge in America, Bow Bridge is mid-park off 74th Street, west of Bethesda Terrace.
Posted by Tom Miller at 2:57 AM