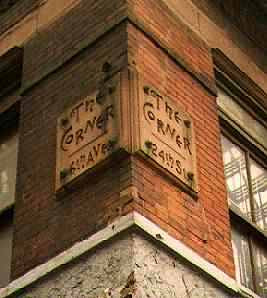 In the last half of the 19th Century 23rd Street was the theatre district of Manhattan – opera houses, music halls, theatres and vaudeville houses lined the street from 5th to 8th Avenue. At the northwest corner of 23rd Street and 6th Avenue was Bryant’s Opera House – the home of the highly elaborate and popular minstrel troupe, Bryant’s Minstrels, perhaps most remembered for premiering the song “Dixie” and other Stephen Foster songs. When it was put up for sale in 1878, German-born Albert Bial and John Koster, who ran German-style concert hall and beer garden next door, took it over.

The newly-named “Koster and Bial’s Music Hall” included a closed 1200-seat vaudeville theatre and open-air beer garden. Because there was a law against selling alcohol in a theatre, the stage curtain was removed and a folding screen put in its place. And with that the music hall became a restaurant offering entertainment rather than a theatre offering food and drink.

Moses King, in his 1892 Handbook of New York City referred to Koster and Bial’s as “high-class” and said that the “entertainments are of the vaudeville or variety order, like those given at the Alhambra in London and the Eldorado in Paris, with a burlesque to lead the programme…”


In 1886 Koster and Bial commissioned German architects Herman J. Schwarzmann and Albert Buchman to build a saloon and retail outlet for their beer bottling business a block north at the corner of 24th Street and 6th Avenue. Construction of the 4-story brick building with brownstone and terra cotta trim was completed on January 25, 1887.

The saloon was dubbed “The Corner” and an exuberant metal cornice proclaimed the name as well as KOSTER & BIAL. On the 2nd floor corner of the building brownstone plaques carved with whimsical late Victorian lettering reading “The Corner,” doubled as street signs. Patrons entered through an ornate entrance of cast iron, stained glass and polished wood. The music hall and the saloon were joined so theatre-goers could enter either through the main entrance at 23rd Street or through The Corner building.


Trouble started when Koster and Bial offered more than food, drink and vaudeville. They also offered gentlemen patrons the paid favors of women. The New York Times, in a 1902 article reminiscing about former theatres, remarked “While Koster & Bial were in Twenty-third Street the notorious 'cork room' existed in their theatre. The walls of this room were covered with stoppers from champagne bottles, and the affairs that took place in the room in the late hours after show time would have astonished the churchgoers. In fact, what happened in the 'cork room' did finally become so well known that the affairs had to be stopped.”

The scandal of police raids forced John Koster to close the music hall on 23rd Street in 1893. Koster and Bial moved to 34th Street, partnering with Oscar Hammerstein I in the opening of a new Koster and Bial’s Music Hall.

A year later Josiah Belden took over “The Corner,” running a billiards parlor and grocery on the first floor and “lodge rooms” above. 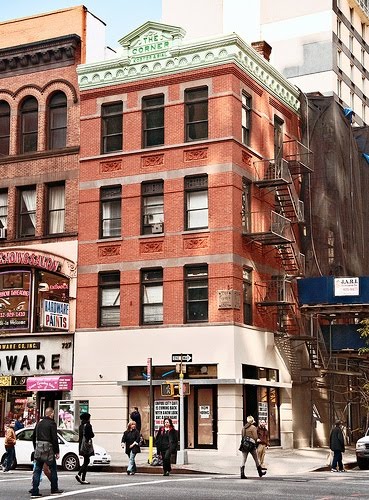 At some point in the 20th century the beautiful saloon front was removed, replaced by a hum-drum commercial front. Various establishments came and went until Billy’s Topless moved in in 1970. For just over 30 years Billy’s was a neighborhood fixture, offering gentlemen patrons the paid entertainment of women – albeit more in line with the law than those of the former Cork Room.

Mayor Rudolph Giuliani shut down Billy’s Topless in 2001 as part of his quality of life initiatives.

The Corner stands relatively unnoticed today; however the floors above street level, including the marvelous cornice and wonderful brownstone street markers, are in a remarkable state of preservation. 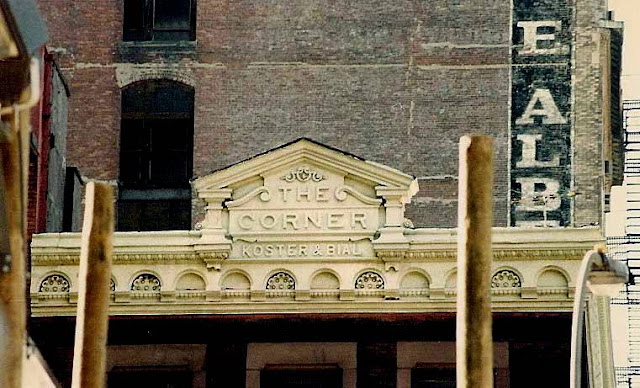