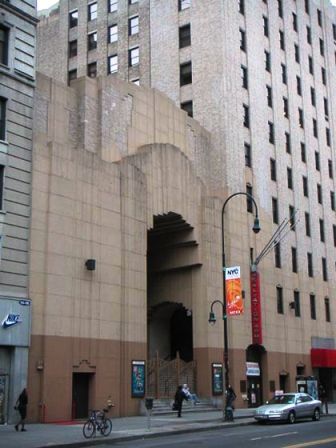 When the Salvation Army first branched out into in the States in 1880, there was little need for a headquarters.  Meetings and revivals were held in tents or in the open air.  Founded in 1865 by William Booth in London with assistance from his wife, Catherine, the organization waged "warfare against evil" complete with military-styled uniforms.

As the turn of the century neared though, things changed.  Gilbert A. Schellenger was commissioned to design a headquarters building at 120 West 14th Street.  The active street, along with the proximity to the 6th Avenue elevated train station, was a guarantee of high visibility for the organization.  Schellenger's building was a seven-story Italianate fortress in keeping with the Salvation Army's military theme.

In spite of the good that the organization did -- such as alcohol and drug rehabilitation and social reform -- the public often viewed the organization with suspicion and negativity.  Booth's daughter, Evangeline, was sent to New York in 1904 to take charge of the U.S. operations.  As the 50th Anniversary of the Salvation Army's work in America and the centennial of her father's birth neared, Evangeline set out to change public perception.

Her goal was to present the organization in a more progressive light.  In 1928 Booth contracted architects Voorhees, Gmelin & Walker to do just that.  The firm was on the cutting-edge of modern architecture in New York at the time.  They were responsible for some of the most unique art deco skyscrapers in the city including the Bank of New York, The Western Union Building and the Irving Trust Building.  Ralph Walker, whose reputation for creating visually distinctive designs with unusual materials was already firmly established, was put in charge of the project.

Dedicated in 1930, Walker's complex included the organization's headquarters, a residence hotel for working women, meeting rooms and the grand Centennial Memorial Temple.
The Temple included a 1600-seat auditorium in a cavernous Art Deco space.  It was the first religious space in New York to have extra-wide seating for overweight audience members.  The dedication was a gala affair including a concert on the new $22,500 organ by Henry F. Seibert, organist of the Town Hall.  John Phillip Sousa wrote a march for the occassion, "The Salvation Army March" and personally conducted the Salvation Army Band.
The aging Sousa's composition was somewhat uninspired compared to several of the other marches composed for the event.  Somewhat abashed, Sousa apologized to Staff Bandsman Burtenshaw afterward.  "If I'd known that you had so many bandsmen who could play like that, I would have written a more challenging march," he said.

The architectural masterwork of Walker's complex, however, is the deep grotto-like entrance.  The stepped concrete facade with curtain-like folds was cast in place.  Great metal Art Deco gates span the entrance with a rising sun motif.  And while Evangeline Booth sought to downplay the militaristic aspects of the Army, she retained the organizations battle cry in large bronze letters on the entrance wall:  Blood and Fire. 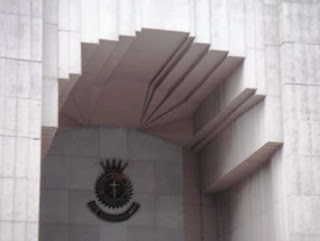 Ask three architectural historians to identify the style of the Centennial Memorial Temple and you will get three separate answers.  It is variously tagged Art Deco, Ziggurat Moderne, and German Expressionism.  I have my own term:  Wizard of Oz Art Deco.  I simply cannot stand before that incredible entrance and not expect to look up to see SURRENDER DOROTHY written across the sky in smoke.

Although the Salvation Army's 14th Street headquarters is largely overlooked, it has survived 80 years with virtually no alterations and remains one of New York City's most significant Art Deco design works.
Posted by Tom Miller at 12:22 PM