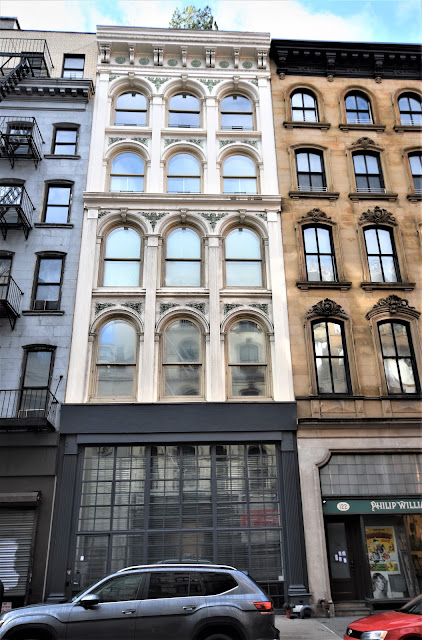 The ultra-wealthy Jones families were a significant presence on the Chambers Street block between West Broadway and Church Street in the first decades of the 19th century.  In 1818, the year they were married, Isaac Jones, Jr. and his wife, the former Mary Mason, erected fine home at No. 122 Chambers Street, and in 1828 Isaac's brother, William Henry Jones, built a 23-foot wide residence next door at No. 120.
By the 1850's their exclusive neighborhood was being increasingly invaded by commerce.  In 1857 the Jones families demolished their houses and replaced them with modern loft buildings, while retaining ownership of the properties.  The names of the architects have been lost, but they were almost assuredly not the same person.
No. 122 was faced in sandstone, while No. 120 received a cast iron facade--the latest in construction technology--from the foundries of Daniel D. Badger's The Architectural Iron Works.   That new building, completed in 1858, ran through the block to No. 50 Warren Street where an identical façade was installed.
The graceful Italianate-style design was divided into three parts by intermediate cornices.  Two identical two-story sections flanked by double-height Corinthian pilasters sat atop a cast iron storefront.  The spandrel panels of the arched openings were filled with frothy decorations.  An especially handsome bracketed cornice with rosettes completed the design. 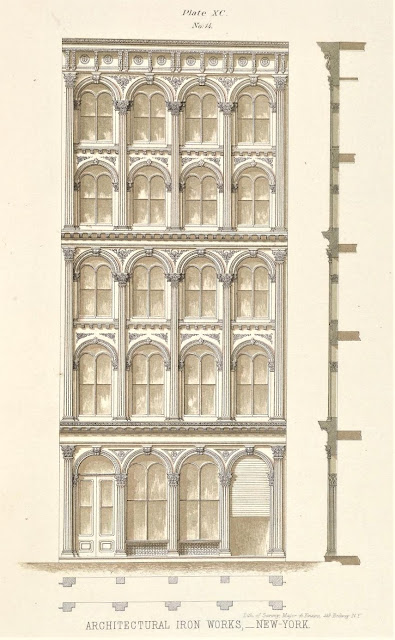 A slightly wider version of the facade was pictured in the Architectural Iron Works catalog of 1865.  (copyright expired)
Interestingly, on May 6, 1856--even before demolition of the old Jones house had begun--space in the proposed building was being offered for lease.  The advertisement promised that the site "is to be immediately improved by the erection thereon of a five story first class store in all respects, with two basements and with all the modern improvements, either of marble or iron."  A lease was available to "an undoubted tenant" for ten or fifteen years "and the building will be arranged to suit his convenience."
Among the initial tenants was A. R. Van Nest & Co., which took the three lower floors.  Established in 1835 by Abram R. Van Nest, it was the foremost saddlery hardware firm in the city.  The first floor sales room offered, according to the 1859 The New-York Sketch Book and Merchants' Guide, "every variety of Heavy and Japanned Saddlery Ware, and Patent Leathers and Cloths of their own manufacture; also, all qualities and descriptions of Spurs, Stirrups, and Bitts, for riding and driving."  There were also harness mountings, carriage cloths and fringes, carriage lamps and whips.
The second floor salesroom was devoted to the sale of textiles and accessories--carriage blankets, curry combs, reins, shafts, springs and axles, "in fact, Buggy and Carriage Trimmings of every kind," according to The New-York Sketch Book.
The upper floors housed the "hats and caps" factory of  Geo. W. and Jehial Read.  Its brisk business was reflected in a continuous string of help wanted ads.  On February 21, 1859, for instance, an advertisement sought "two first class straw and silk bonnet trimmers.  None but experienced and capital hands need apply."  The same month the firm was seeking "a porter; one accustomed to the hat, cap and straw goods business."
Geo. W. and Jehial Read seems to have left the building by 1861, replaced by two apparel firms, George W. Nelson and T. S. Young & Co.
In 1860 T. S. Young & Co. had hired a 17-year old boy, Edwards Tomlins.  The New York Times noted "he came highly recommended to his employers, and he soon exhibited such a marked talent for business, and was withal so apparently conscientious and honest, that his employers were induced to repose the most implicit confidence in him."  By the time the firm moved into No. 120 Chambers Street, Tomlins had been promoted to cashier--a highly responsible position--and was in charge of handling the company's books.
Tomlins earned only $300 a year--less than $8,000 in today's money.  And yet, according to The New York Times on December 24, 1862, "During the last four months, his employers and others noticed, with some surprise, that the young man was very extravagant in dress, and also in some other respects, but, strange as it may appear, they did not for a moment suspect that he was robbing their money-drawer."  The article said that, instead, they believed their "fast clerk" was living beyond his means, or that he had perhaps come into an inheritance.
Rather than arriving at work on a streetcar, Tomlins took a carriage to and from his boarding house every day.  "And yet such was the confidence with which this firm trusted young Tomlins that it never occurred to them to examine the cash-book or drawer, to see whether or not their confidence was misplaced."  As the year drew to a close, however, Tomlins knew that an audit of the books would be performed in January.  And the result would thrust him into "hopeless ruin."
On Morning morning, December 22, 1862 Tomlins--now 19-years-old--did not appear at breakfast at his boarding house.  When he had still not come down at 10:00, his landlady, Mrs. Archer, went up to check on him.  The New York Times reported, "The sight which then presented itself to her view caused her to start back and scream with fright.  On the floor of the room lay the apparently lifeless form of Tomlins, and beside him was a revolver."
When word of his death reached T. S. Young & Co. a cursory examination of the books was performed.  It was immediately apparent that more than $26,000 in today's money was missing "and it is believed that a more thorough investigation will reveal larger defalcations," said The New York Times.  Tomlins had taken care to use some of the stolen money to pay off his debts before ending his life.  His $462 tailor bill and $251 carriage bills had been paid--a total of $17,800 by today's standards. 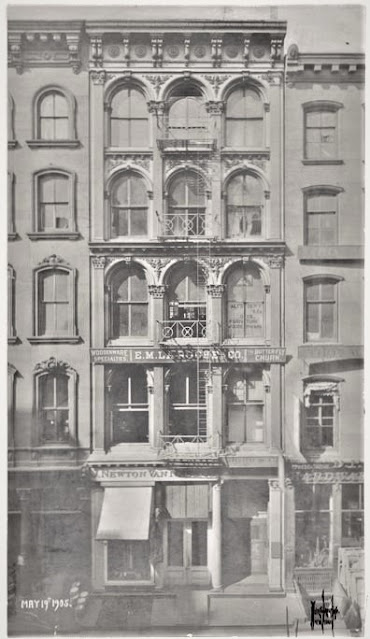 A. R. Van Nest & Co. had been renamed J. Newton Van Ness & Co. when this photo was taken in 1885.  from the collection of the New York Public Library
Like many other apparel firms, George W. Nelson sometimes gave work to contractors to be made off-site.  Unfinished garments would be passed off to a tailor to do the finish work.  It was an arrangement that profited Polish-born tailor John Harris and a garment retailer, Louis Johnson--at least for a while.  During the summer of 1865 Harris took work from various firms then sold them to Johnson, "telling that person, at the time of the sale, that they had been stolen," according to The New York Times on August 12.  Their scheme was doomed to failure, obviously, when the finished garments never showed up at the original factory.  When the pair was arrested George W. Nelson was out more than $3,000 in garments by today's standards.
While other firms came and went over the decades, A. R. Van Nest & Co., remained.  The Van Nest family was among the early settlers of New York City and the Van Nest mansion in Greenwich Village where Alexander had been born, was a landmark.  Interestingly the family name had been interchangeably spelled Van Nest and Van Ness for decades.
By the early 1880's the firm was renamed J. Newton Van Ness Co.  Despite the name, the principal of the firm was still Alexander T. Van Nest, who had taken over the firm from his father. 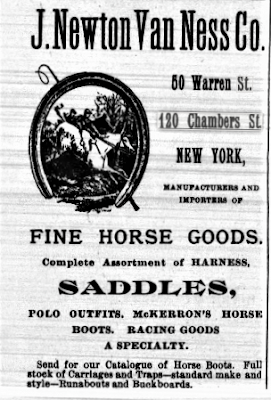 Brooklyn Life, December 3, 1892 (copyright expired)
Ill health forced Alexander T. Van Nest to retired relatively young in the early 1890's.  This condition was complicated in the spring of 1896 by an attack of appendicitis.   On July 14, 1896 he and his wife sailed for Europe for a several-month stay.  The 52-year-old died in the small Prussian town of Langenschwalbach on August 10.
At the time the New-York Bottlers' Supply Company was on the third floor of No. 120, the Regal Lamp Shade Company occupied the fourth, and the top floor was shared by the Herbert Brush Co. and the Brenack Paper Company.
Both small operations, the Herbert Brush Co. and the Brenack Paper Company employed just a handful of workers.  The brush firm's staff of four men worked 59 hours per week plus nine hours on Saturdays.  The Brenack Paper Company consisted of foreman Francis O'Brien and four young girls.
On the afternoon of March 3, 1896 O'Brien "turned around and saw tongues of fire licking the ceiling," as reported by The New York Times.  "He at once shouted 'Fire!' and to add to the general confusion, Bertha Reed of 37 Gwinnett Street, Brooklyn, fainted."  The three other girls carried her down the the stairs to the street.  "Further than this, there was no excitement," said the article.
A second alarm was called in and, according to The New York Times, "to this can be attributed the fact that the fire was so quickly put out."  Nevertheless, the building was flooded "from top to bottom."
J. Newton Van Ness & Co. suffered $10,000 in water damage, nearly $315,000 today.  The other tenants' losses were less significant, the largest of which was about $2,000.
In 1906 J. Newton Van Ness received a satisfying contract to supply "horse equipments, harness and stable supplies" for the New York City Police Department.  The total amount would equal more than $100,000 today.
That same year a recent rival firm, Bartley Bros. & Hall Co. moved into the building.  The National Harness Review explained that "owing to enormously increased business" the young firm was "compelled to seek larger quarters."  The journal described the company's offerings as "one of the most attractive stocks of imported saddlery to be found in this country."
The two competing firms co-existed for 12 years.  Then, in its April 1918 issue, Harness magazine reported "The old established harness business of the J. Newton Van Ness Co., at 120 Chambers Street, New York City, has gone out of business, the stock, good will, etc., having been purchased by Bartley Bros. & Hall."
By 1920 Topping Brothers, manufacturers and dealers in "heavy and marine hardware, shipbuilders', railroad and contractors' supplies," operated from the building.  In the meantime, Bartley Bros. & Hall
continued to gobble up well-established firms.  On January 22, 1923 Greater New York noted that the firm were the successors to "Veil Brothers, C. C. Bartley, C. M. Moseman and Brother and J. Newton Van Ness Company."  The firm had opened a London branch by now.
After having been a saddlery showroom since 1858, the ground floor was converted to the Chamberlain Restaurant around 1924.  It was the scene of a moving testimonial dinner on April 1, 1925.  John Paul Kottcamp was retiring as course supervisor of the Pratt Institute School of Mechanical Engineering.  The Brooklyn Daily Eagle reported, "Two hundred of his former and present pupils attended."  He was presented with a silver gavel and a black leather traveling bag in appreciation for his years of service.
In 1927 architect Murray Klein was hired to design a replacement storefront.  The building continued to house small manufacturers until 1990 when it was converted to offices. 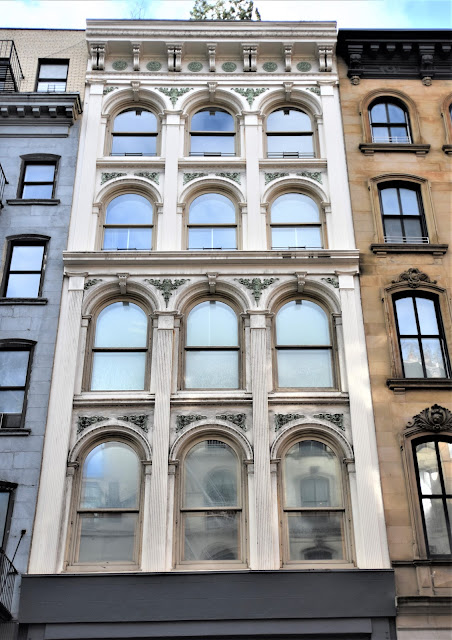 The Corinthian capitals of the pilasters have been sadly lost.
That all changed in 1996 when a renovation resulted in sprawling apartments on the upper floors.  Murray Klein's 1927 storefront was markedly redesigned, however the Badger pilasters somehow survived along the sides.
photographs by the author
Posted by Tom Miller at 1:10 AM