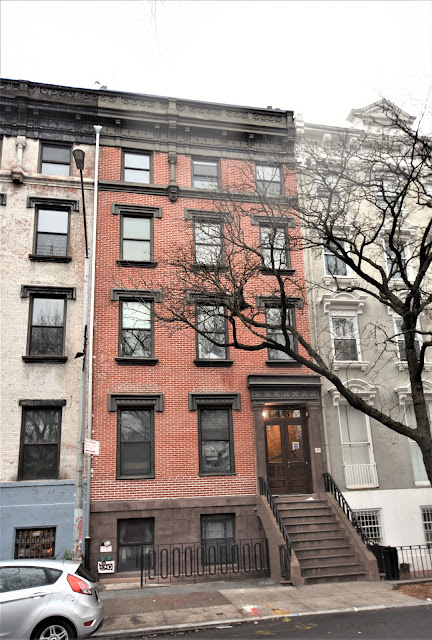 Around 1847 builder James C. Whitlock and Franklin Baylies began construction on four Greek Revival houses on East 10th Street facing the newly landscaped Tompkins Square.  Faced in brick, each was 25-feet wide and rose four stories above an English basement.   The brownstone piers which flanked the double-doored entrances supported a heavy entablature, and the parlor windows stretched to the floor.

No. 315 10th Street ("East" was not added to the address until around 1868) was purchased by Robert Hogan in 1848, but it appears he bought it for investment purposes.  On April 20 the following year an advertisement appeared in The Evening Post offering:

Tenth street--The 4 story brick house known as No. 315 Tenth st, opposite Tompkins Square...finished in modern style.  $5700 of the purchase money can remain on bond and mortgage.

Although Hogan did not reveal the total purchase price, the $5,700 "on bond and mortgage" would equal about $197,000 today.  The buyer ordered all new furniture, "made to order" for the residence.  But the family would not enjoy their new home for long.  Possibly struck by financial difficulties, they put it back on the market in 1851.  The new furniture was offered "at a fair valuation to the purchaser."  The modern amenities in the house included, "hot, cold and shower bath, range water closet, wash basins, gas fixtures, &c., &c."  The ad noted the house was "finished in the best manner."
It was next purchased by John Conway, a well-to-do butcher with businesses on Avenue C and in the Catherine Market downtown.  He and his wife, Catharine, had two sons, William and Michael, who worked in the family business.
Once again the family's residency would be relatively short-lived.  On May 13, 1855 Catharine died and her funeral was held in the parlor two days later.  In 1860 the Conway family left the East 10th Street house and it was acquired by the Sisters of Charity.  It was converted for use as one of three Sisters of Charity Schools operated in the city.
By 1881 the Sisters of Charity had acquired the abutting house at No. 313 East 10th Street and operated the two properties as St. Bridget's Academy.  The houses were not combined internally, suggesting they were separated by grade or age level.  In 1881 there were 115 girls enrolled in the school.
In 1885 the country, and especially New Yorkers, were excited about the monument that was being completed in New York Harbor--the gift from France of Auguste Bartholdi's colossal Liberty Enlightening the World statue.  Long before it would be known by its nickname, The Statue of Liberty, and the eager anticipation of the monument made its way into the graduation exercises of St. Bridget's Academy in Chickering Hall on June 30, 1895.
The New York Times reported, "The tableau 'Unveiling of the Bartholdi Statue' received much applause.  Nearly 100 little children attired in French, American and Spanish costumes marched about a tall object that stood in the middle of the stage.  A young lady representing the Goddess of Liberty escorted George Washington to the statue, which, being uncovered, revealed a young woman with a torch in her right hand."
In 1892 architect Franklin Baylies was commissioned to remodel the exteriors of the two former houses.  He added Gothic Revival touches--applied square headed drip moldings over the windows, quatrefoil decoration to the entrance entablatures, offset engaged columns at the top floor which visually gave balance to the two facades, and a muscular parapet above the new cast metal cornice. 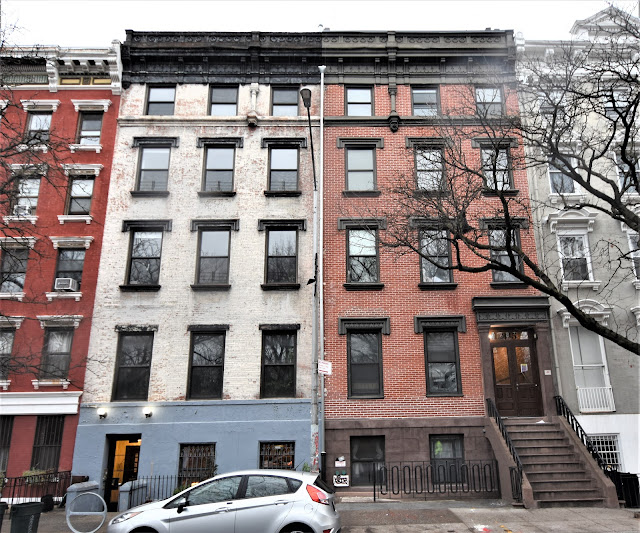 St. Bridget's Academy remained in the house for decades.  Then, on June 29, 1920 the New-York Tribune reported "The Academy property of the Sisters of St. Vincent de Paul, at 313 and 315 East Tenth Street, has been resold by Leopold Horowitz to the Independent Stryjer Benevolent Society.
The Tompkins Square neighborhood was the center of the Eastern European community at the time.  The interiors of the former school were altered into a clubhouse for the Russian Erudition Society, "Nauko," by the architectural firm Fred Morton & Co. at a cost of $152,000 in today's money.  A new entrance was installed at the basement level that provided direct access to a large restaurant and meeting hall.
A wave of support for Presidential candidate Herbert Hoover swept through the Russian community in 1928.  Signs reading Golosuite za Xuvera, or Vote for Hoover, were written in chalk and printed on handbills throughout the district.  The New York Evening Post explained on October 17, "All because 'Xuvera' is a man who once was identified with the saving of more than 5,000,000 Russian lives--and because the Russian people's gratitude has lasted for seven years."
A political debate on Hoover and Smith was held in the meeting hall on October 18.  J. J. Lissitzyn, founder and director of the Russian Lawyers' Association debated a Columbia University student, V. D. Kazakevich.  The New York Evening Post noted, "The Russian Society Nauka's hall at 315 East Tenth Street, which seats from 500 to 700 persons, is expected to be jammed with interested Russians."
Other activities within the clubhouse were less benign, at least from the viewpoint of the United States Government.  In 1930 the Special Committee to Investigate Communist Activities in the United States turned its attention the Russian Liberals' Association which was headquartered at No. 315.  A letter received by one member dated April 7, 1930 tipped the committee off on "Bolshevist propaganda in New York City, especially among the Russian."  Among its findings was the upcoming annual conference of the Russian Consolidated Mutual Aid Society to be held on April 12 at 315 East 10th Street. 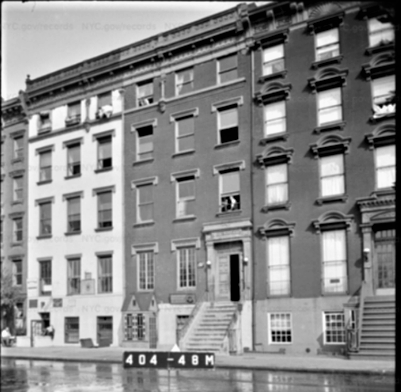 The charming entrance to the restaurant and meeting hall can be seen in this photo from around 1941.  via the NYC Dept of Records & Information Services.
Ironically, the Russian Mutual Aid Society was neither Communist nor Bolshevik at all, but its members were what was termed "White Russians"--those who were interested in preserving the culture of pre-Revolutionary Russia.  That was reflected in the Society's school, founded in 1919, which now also found space in the building.
On February 8, 1934 The New York Sun reported on the 15th anniversary of "this strange other-worldly school, where traditions and culture of a regime that no longer exists are kept alive in the minds and hearts of young, flaxen-haired Russians, who, perhaps, never will return to the land of their ancestors."  There were about 200 children enrolled, ranging from 7 to 16 years of age.  The two teachers, Madame Eugene Fovitzky and Madame Nadine Stemberg, were "vested with the responsibility for perpetuating the traditions of Czarist Russia."
According to the article, the school had just begun to use a modern map in teaching the geography of Russia.  Madame Fovitzky said "It hurts us older people who knew the old Russia to see it so changed.  But the present map is a fact, and it would be stupid for us to ignore the changes made upon it by politics."
Nevertheless, the teaching of history was another thing.  The New York Sun's article said "History, as taught on Tompkins Square, arrives only to 1917.  The schoolroom walls are decorated with colored pictures illustrating Imperial Russia's triumphs.  But of the deposition of the Czar and the exodus of so many thousands of his subjects, nothing is said." 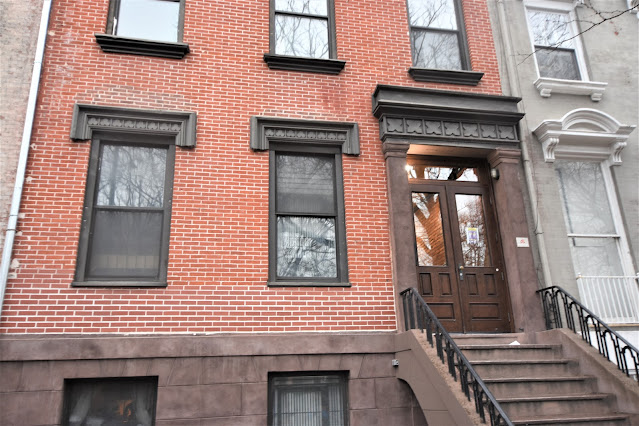 The trefoil lintels and quatrefoil entrance decorations were simply applied over the existing elements.
The school was gone in 1951 by which time the Pushkin Memorial Home for the Aged shared the house with the Roova Aid Bureau.  In 1975 it was home to the Organization for Defense of Four Freedoms for Ukraine, and two years later the building was renovated for The Educational Alliance / Project Contact Crisis Center, an alcoholism and drug abuse treatment center.  There was now a lounge and dining room in the former meeting hall space in the basement, offices and counseling space on the first and second floors, and dormitives on the top two.
Another renovation completed in 2020 resulted in a total of 12 apartments.  The residents, most likely, have little clue to the amazing history that has played out within its walls.
photographs by the author
Posted by Tom Miller at 2:33 AM