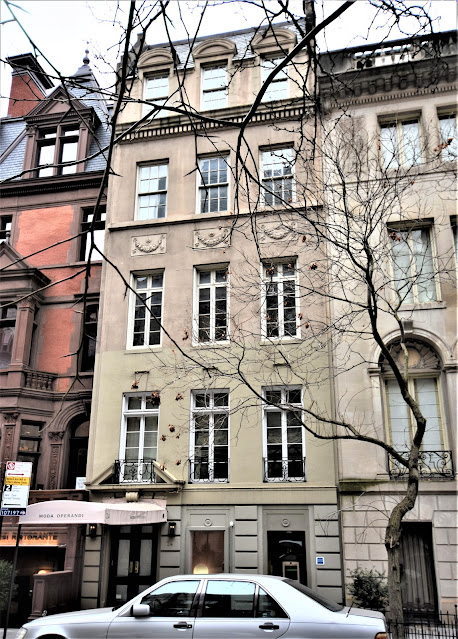 Real estate developer Theodore Weston acted as his own architect when he erected four Queen Anne style homes on the south side of East 64th Street, just west of Madison Avenue, in 1881.  Four stories tall above high English basements, they were completed the following year.

Weston sold the western-most of the row, No. 24, to William Cullen Brewster.  Born on July 29, 1831, he was married to the former Georgiana Williams in 1857.  The couple had a two daughters, Annie Seabury and Mary Roget (who went by her middle name) Brewster.
The family had a sterling American pedigree.  Brewster was directly descended from Elder Brewster and John Alden.  Georgiana's ancestors included Roger Williams.
William was a founder of the Plaza Bank and its first president.  He was also president of the Fifth Avenue Safe Deposit Company and a director in the Second National Bank and other financial institutions.
Mary was the first to marry.  Her wedding to Navy Lieutenant Lazarus L. Reamey took place on November 10, 1886 in the Church of the Holy Spirit.  The Argus mentioned, "his bride has very sensibly persuaded him to transpose his two Christian names, and on the wedding invitations he stands as Lieutenant Lowry L. Reamey."
The writer had visited the Brewsters' home previous to the ceremony and wrote, "I saw, confidentially, a guest chamber crowded with sumptuous bridal gifts, many of them from Tiffany's."  A reception was held in the house following the wedding.
Mary's parents had been uneasy at the both the pace of the couple's romance (they had known each other just ten days before Reamey proposed) and what The Argus called "the genteel poverty of our naval service."  But William Brewster found the suitor his other daughter eight years later even more troubling.
The problem was that the Brewster family was Episcopalian and Count Henri de Frankenstein was Roman Catholic.  The Polish count traveled from Rome to New York in January 1894 and waited nervously for two months as William and Georgiana talked it out.  (One imagines that Georgiana may have pressed for the match, which would result in her daughter's becoming a countess.)
Finally, on March 13, according to the Indianapolis News, "Mr. Brewster looked relieved this morning.  'I have given my consent to his marrying my daughter,' he said.  'They are engaged.  The wedding will take place, I presume, on March 28.'"  The article noted that the prospective groom's family "are closely allied to the family of the Pope" and "Miss Brewster may be obliged to renounce Protestantism and become a Roman Catholic."
On March 28 The Evening World reported "The marriage of County Henri de Frankenstein to Miss Annie Seabury Brewster...who is worth $1,00,000 in her own right, took place at 11:30 o'clock this morning in St. Patrick's Cathedral."  A wedding breakfast was held in the East 64th Street house, the guest list of which groaned with high-level society names like Rockefeller, Mills, Post, Thebaud and Gibson. 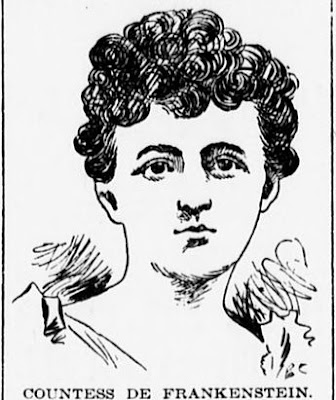 Annie Brewster on her wedding day.  The Evening World, March 28, 1894 (copyright expired)
Brewster, however, seemed not quite reconciled.  At the breakfast, according to The Evening World, "He went from one room to another with his hands in his trousers' pockets, his head bent, his nerves unstrung, and a cigar in his mouth, puffing smoke into the rose and lily scented atmosphere."
William Cullen Brewster suffered a fatal heart attack in the house on May 30, 1900.  His estate sold No. 24 East 64th Street the following February to Judge H. W. Bookstaver for $70,000--about $2.2 million in today's dollars.
The house saw a turnover in owners over the next two decades.  Major change came in 1919 when it was purchased by Charles G. Cornell, Jr.  (Interestingly, he paid $70,000 for the property, exactly the price paid almost two decades earlier.)  He hired society architect Mott B. Schmidt to remodel the outdated Victorian into a modern, American basement residence.
Schmidt removed the stoop and pulled the front forward to the property line.  He replaced the brownstone facade with white stone.  What had been an eccentric Queen Anne house now wore a prim Adamesque facade 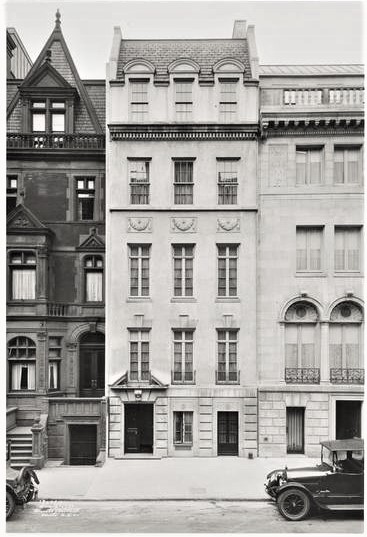 The original appearance of the house is suggested by the No. 26 partially seen to the left.  photo by Wurts Bros. from the collection of the Museum of the City of New York.
Sculptress Consuelo Vanderbilt was the daughter of Virginia Fair and William Kissam Vanderbilt, Jr.  She was named after her aunt (the daughter of William K. Vanderbilt, Sr. and his wife Alva), who had become the Duchess of Marlborough.  On January 26, 1926 she married stock broker Earl E. T. Smith in her father's mansion at No. 666 Fifth Avenue.
The newlyweds would make No. 24 East 64th Street their home.   The New York Sun remarked, "The house, completely furnished, was a wedding gift from her father, William K. Vanderbilt."  Although Mott Schmidt's interiors were only five years old, Consuelo hired John Russell Pope to make alterations before the newlyweds moved in. 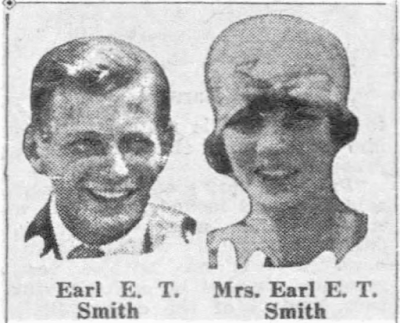 Daily News, March 9, 1927
On March 9, 1927 the Daily News reported that the couple had welcomed their first child, Iris.  "Two of three middle names will be given the seven-and-one-half pound morsel of aristocracy now lying under silk coverlets in the Smith home at 24 East 64th st.," said the article.
The couple's second daughter arrived three years later.  On May 20, 1930 the Daily News reported "Another heir to the vast fortunes of the clan Vanderbilt was born on Sunday...The child...is a great granddaughter of Mrs. Oliver H. P. Belmont and the late William K. Vanderbilt on the maternal side and the late Edward N. Tailer, social lion of the mauve decade, on her father's side."  The baby was named Virginia.
But the end of domestic bliss was on the horizon.  In 1934 the Smiths separated.  The New York Times said, "Relatives and close friends, it is learned, have been endeavoring to effect a reconciliation.  Few, however, knew of the marital difficulties."  On January 9, 1935 the newspaper reported that Consuelo had arrived in Reno to institute divorce proceedings.
The eight-minute private trial was held on February 21.  The New York Times reported, "Mrs. Smith, who is reported to have a personal income of $1,000,000 a year, went directly to District Judge Thomas F. Moran's court room.  A moment later the doors were locked behind her and the trial began."  Consuelo's claims of "extreme cruelty" were supported by the testimony of a servant, Mrs. A. A. Blackmer.
Consuelo sold No. 24 East 64th Street to Colonel Grayson M. P. Murphy, and in turn bought his former house at No. 11 East 70th Street.  Grayson was a senior vice president of the Guaranty Trust Company and founder and principal in the brokerage firm of G. M. P. Murphy & Co.  During World War I he had served as the first European Commissioner of the American Red Cross, and more recently was implicated in the failed 1933 conspiracy, known as the Business Plot, to overthrow President Franklin Roosevelt in a military coup.
Grayson would not enjoy the house for long.  He died in October 1937, about a year after moving in.  The residence was sold by his estate in December.
Owner William H. Hawkins hired architect Morris Whinston to alter the house to accommodate the Lawrence O'Toole Gallery at sidewalk level and apartments on the upper floors.  On December 21, 1940 The New York Sun deemed James St. L. O'Toole's new galleries "exceedingly agreeable and lend themselves well to the furtherance of exhibitions."
The Lawrence O'Toole Art Gallery remained in the space until 1958 when the ground floor was converted to one apartment and a retail space.  Another renovation completed in 1976 resulted in offices throughout the building. 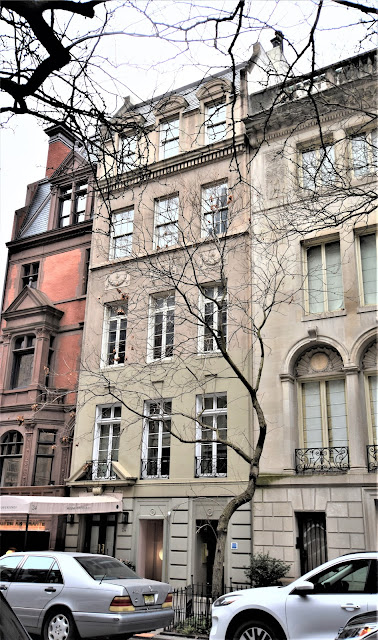 The ground floor space became home to Bradley Mischka's first Manhattan boutique in 2013.  Despite the interior alterations in the second half of the 20th century, the sophisticated mansion retains much of its 1920 appearance.
photographs by the author
Posted by Tom Miller at 1:14 AM