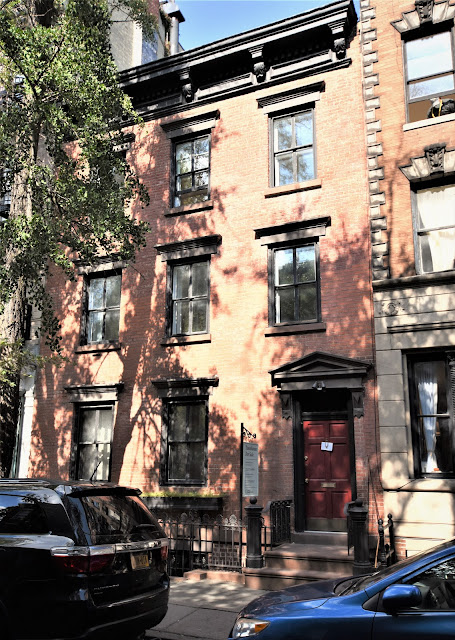 In 1822 New York City faced a terrorizing invader: yellow fever.  The number of deaths climbed to 140 per day, churches were ordered closed, and those who were financially able fled north to the healthful, rural air of the Village of Greenwich.
J. Hardie wrote in his diary that on August 24, 1822:

...our city presented the appearance of a town besieged.  From daybreak till night one line of carts, containing boxes, merchandise, and effects, were seen moving towards "Greenwich Village" and the upper parts of the city...Temporary stores and offices were erecting, and even on the ensuing day [Sunday] carts were in motion, and the saw and hammer busily at work.

Some citizens who had never been involved in real estate suddenly took advantage of the sudden population boom to invest in speculative development.  Among them was grocer Henry Potter who erected two Federal style houses at Nos. 45 and 47 Hammond Street.
The 25-foot wide dwellings were, most likely identical.  Two-and-a-half stories tall, they were faced in Flemish bond brick, their peaked roofs punctured by prim dormers.  The entrances sat above a two-step porch above the basement level.
Among the early residents of No. 45 (renumbered 251 West 11th Street in 1864) were Jacob Hoffman, his wife and two children.  On the night of April 8, 1839 Hoffman left to view a political parade by the Butt Enders--a faction of the Democratic party.
The group, which was often boisterous and rowdy, was composed of working-class men who espoused pro-labor issues.  Their name, most likely, referred to workingmen's habit of chewing on the left-over stump of their cigars.
The parade was not without tragedy.  The New York Daily Express reported that as the "procession of Butt-enders, Rowdies and Loafers was passing through Broadway...one man fell down, and was run over and trampled upon, and bruised so badly as to deprive him of all sensation of signs of life."  The article was referring to Jacob Hoffman.   On April 10 the New-York American reported on the Coroner's inquest upon the body "of the unfortunate man, Jacob Hoffman, who was accidentally killed by being run over by a cart which formed part of the 'Butt Ender's' procession on Monday night."
There would be another Coroner's inquest within the house five years later, on July 23, 1844.  A boarder, John Steen, had a reputation as a drinker, prompting The Morning Express to entitle an article "Death From Intemperance."  The coroner concluded that "John Steen, who was very intemperate in his habits...died in a fit thus produced last night."
Mary Chase most likely boarded in the house in 1850.  The 44-year old was a teacher in Public School No. 26 on West 21st Street.  The New York Times said "The building had just been erected and was thought to be perfect," but it added "Those capable of judging...felt that one great error had been made in its erection.  No suitable stairway had been provided, by which the children might rapidly and safely pass from the building in case of fire."
Only a year later that omission turned tragic.  At around 2:00 on the afternoon of November 20, 1851, the principal, Miss Harrison, suffered a stroke and "fell senseless to the floor."  The New York Times reported:

The children in the school became frightened and made a rush for the door, with the intention of running down the stairs. The children in the other departments hearing the rush below, supposed that there was some great danger, and of course joined the crowd among whom, by this time, the cry of fire had been raised. This cry renewed the fears of the children, and in their efforts to escape they rushed against the frail railing, which gave way before them, and the poor, helpless little ones were precipitated down upon the stone floor beneath. Into this awful chasm they poured like grain from a hopper, (as a policeman expressed it,) until they were piled up to the ceiling of the first floor, some falling from the second story and some from the first.

As the news spread, hundreds rushed to the horrifying scene, including the parents of the children who "uttered fearful and heart-rending cries."  In the aftermath, 44 children were dead, 21 injured and several of the teachers were severely hurt, two not expected to survive.  Among the unfortunate teachers was Mary Chase.
The house where Mary lived was owned by accountant Samuel D. Chase by 1853.  He and his wife continued to take in a boarder.  John Otter, a clerk, lived with the family in 1853 and carpenter William Baldwin was here in 1855 and '56.
City directories no longer listed a profession for Chase after 1860, suggesting that he had retired.  He died on February 1, 1862 at the age of 73 and his funeral was held in the house three days later.
The Chase family did not remain long afterward.  On December 2, 1863 the New York Herald reported that Samuel's son, John L. Chase, had sold the "two-story brick House."  It became home to William L. Stevenson, an engineer, who offered it for sale again in February 1866.  His asking price was $7,500--about $125,000 today.
George A. Jeremiah and his family would be long-term owners.  Born around 1826, he and his wife, Anna E. had four children.  His profession was officially listed as wheelwright at No. 406 Tenth Avenue, but his passion seems to have been politics.  He had already served in the State Assembly and as an alderman and in 1872 he ran again for that position.
Jeremiah made significant updates to the West 11th Street house.  He raised the attic to a full floor with a handsome Italianate cornice, added sheet metal cornices to the windows, and a triangular pediment over the doorway.
George was appointed a Manhattan Bureau officer in the Public Works Department by the Tammany administration in the early 1880's.  The New-York Tribune strongly suggested that he and his associates were involved in corruption on January 14, 1884, saying in part, "There are many peculiarities in the methods followed in the Public Works Department in evading the law in regard to contracts as well as in the letting of contracts."  The article specifically named Jeremiah and others.
Following George's death the house passed to his son, George J. Jeremiah.  He leased it by the turn of the century when a Mrs. Bogue lived at the address.  A newspaper article in 1902 may have sparked a scheme in her mind.
Wealthy widow Sarah Ann Waters died that year, leaving a large estate and many questions.  Attorneys suggested that her "spurious will" was signed "at a time when she was not mentally competent to contract business."  The confusion opened a floodgate to opportunistic fortune seekers.
On December 14, 1902 the New York Herald reported "All day yesterday there was a constant stream of alleged relatives calling upon Dr. Campbell and the several lawyers in the case.  One of them was Mrs. Bogue, of No. 251 West Eleventh street, who said her grandfather had married Mrs. Waters' mother."
George Jeremiah continued to lease the house during the first decade of the 20th century.  William O'Neil rented it in 1908, and Martha Gross signed a lease in 1914.  She operated it as a boarding house.
Among her boarders in 1916 was 26-year old John Daly.  He and four cohorts were preparing to steal "a big gray automobile" in Brooklyn on May 16 that year.  Patrolman Laut happened upon them as they were changing the New Jersey license tag for a New York plate.  As he approached, one of the men pulled a gun.  Laut grabbed the driver "for a body shield" and fired two shots into the air to summon backup.  The gunman escaped, but Daly and the other three were arrested.  More incriminating evidence was found in the automobile--three loaded 38-calibre revolvers and two baseball bats.
The Isinger family lived in No. 251 in 1919 when, as had been the case with Jacob Hoffman 80 years earlier, a bizarre accident occurred during a parade.  Fourteen-year old Edward Isinger joined the "enormous throng" who jammed Fifth Avenue on March 25, 1919 to cheer the troops returning from World War I.  To obtain a better view, he climbed top a glass marquee above a building's entrance.  It could not sustain his weight and, according to The Sun, he "crashed through a glass panel."  The article explained, "He landed on a man standing under the portico and both fell to the pavement.  The man was uninjured, but young Isinger suffered a fractured leg." 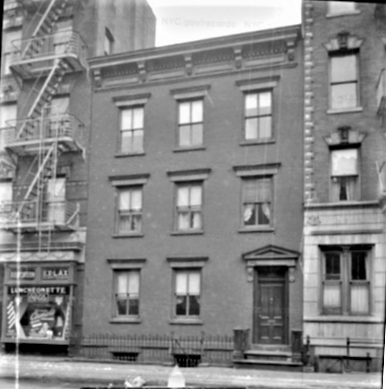 Tied-back curtains and window shades suggest a neatly maintained interior in 1941.  via the NYC Dept of Records & Information Services
After having owned the house for more than half a century the Jeremiah family sold it to Arthur D. Smith in August 1920.  He retained ownership until 1929 when it was purchased by the Spartan Engineering Company.  Surprisingly, the firm did not renovate the house into apartments.  The charming dwelling survives as a single-family home after almost two centuries.
photograph by the author
Posted by Tom Miller at 1:10 AM