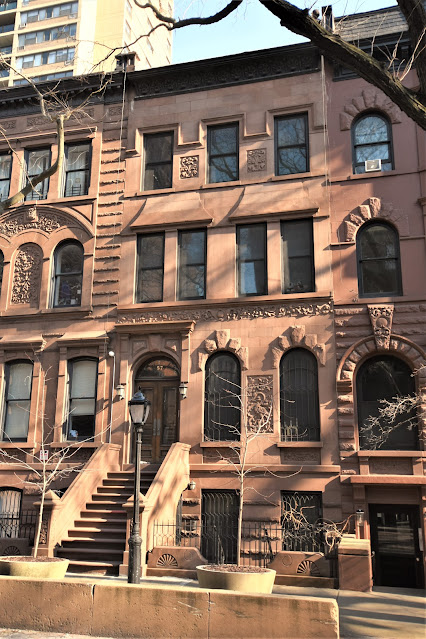 Increase M. Grenell acted both as the developer and the builder for his row of seven comfortable rowhouses on West 94th Street between Central Park West and Columbus Avenue.  He hired Charles M. Youngs to design the houses in 1890.
Youngs, who had been working in New York for at least a decade, is little known today.  His obscurity is possibly because much of his work, it seems, was in making renovations to existing buildings.  And so, perhaps, the 94th Street row would be his crowning work.
He gave each house its own architectural personality while complimenting the rest of the row.  Blending prim Renaissance Revival elements with more rugged Romanesque Revival components, he created hybrid designs that were quintessentially 1890's in taste.
No. 57 West 94th Street was a bit more staid than some of its neighbors.  Solid wing walls took the place of iron stoop railings.  The chunky undressed voissoirs over the parlor windows drew from the Romanesque Revival style and stood in stark contrast to the delicate Renaissance Revival carvings of the panels and frieze at this level.
The second floor was spartan in its decoration, while at the top floor were another two Renaissance inspired panels.  Here a continuous drip molding that smacked of Gothic Revival joined the openings. 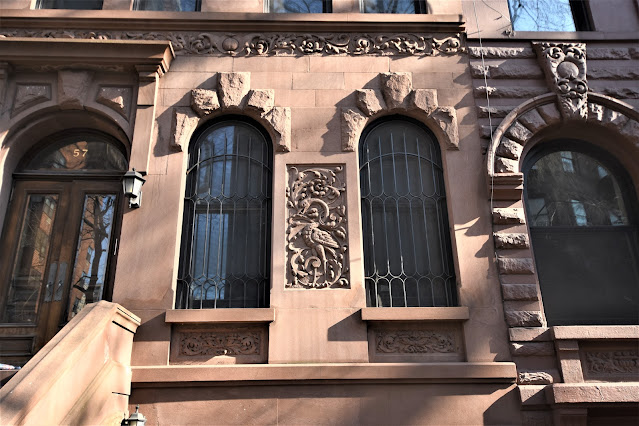 A crane nibbles on berries within the beautifully executed parlor floor panel.
The newly-completed residence was sold in April 1891 for $26,000--just over $750,000 today.  The buyer was David Goldstein, a Polish-born jeweler.   His family remained in the house until around 1895, when it became home to Fredric M. Langdon, a partner in The de Brackeleer Importing Company, Ltd., wine and liquor merchants.
In 1898 No. 57 was purchased by Mary Emma Millett, the widow of Stephen Caldwell Millett who had died in 1874.  Up to the time of his death he had been involved in the construction of the Port Royal Railroad.  Mary was the daughter of Alonzo and Mary Goodrich Child.
Moving into her new house with her were her adult children, Stephen Jr., Mary Goodrich and Kate Child Millett, as well as her unmarried brother, Julius Pratt Child.
A banker, Stephen went professionally by his first initials.  He was perhaps as well known as an amateur tennis player.  The year before moving into the West 94th Street house he had won the Metropolitan Tennis Tournament.  His sisters, who received less press attention, also played in tennis tournaments. 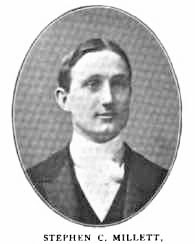 (original source unknown)
Julius Pratt Child was well-known among downtown businessmen.  In September 1885 he had opened a restaurant, The Exchange Buffet, directly across from the Stock Exchange building.  (He predated the Childs Restaurant, opened by the unrelated Samuel and William Childs, by five years.)
The house was the scene of a joyous gathering on November 14, 1899.  A reception was held here following Kate's marriage to John Breckenridge Gibson in St. Agnes' Chapel on West 92nd Street.
Julius Child died on August 27, 1901.  The New York Times noted that his restaurant, "was the resort of many down-t0wn business men" and said, "He was unmarried and lived with a sister at 57 West Ninety-fourth Street."
Stephen took over the reins as president of the Exchange Buffet Corporation.  By now he was, as well, a director in the Mutual Milk & Cream Company and the Merchants' Fire Assurance Corporation.  On February 10, 1902 he married artist Thalia Westcott and the following year he organized the banking firm of Millett, Roe & Hagen. 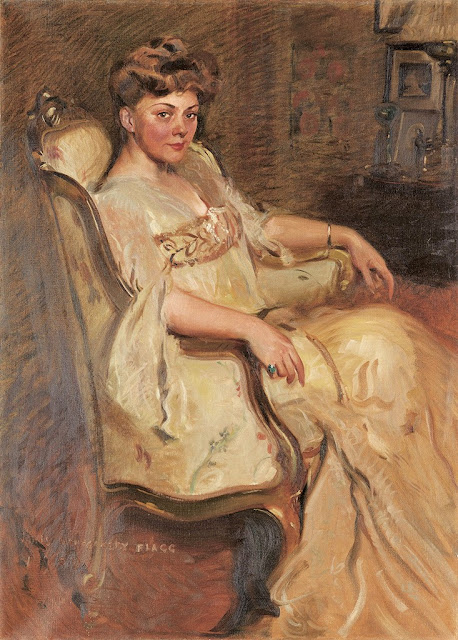 James Montgomery Flagg painted this portrait of Thalia Westcott Millett in 1902, the year she married Stephen Millett.  image via swanngalleries.com
In March 1902 Mary Emma Millett sold No. 57 West 94th Street to C. J. Rose and his wife, Elizabeth.  She most likely moved into Stephen and Thalia's massive new estate at Irvington, New York. 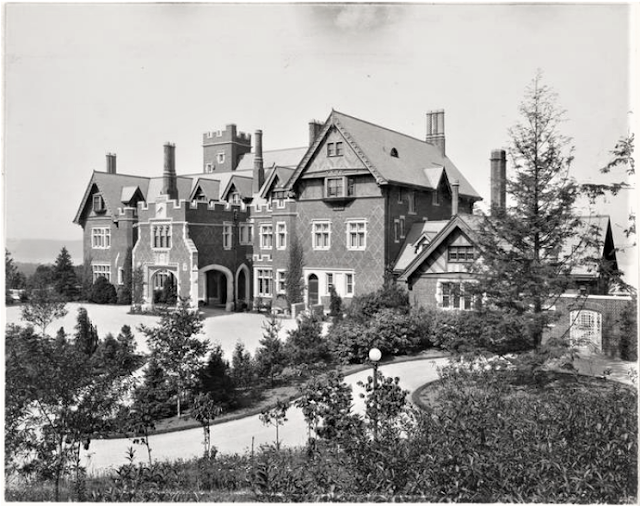 Stephen and Thalia Millett moved permanently into the mansion in Irvington.  photographer unknown, from the collection of the Museum of the City of New York

Stephen's and Thalia's marriage did not end well.   Thalia divorced him in 1920 to marry Donald C. Malcolm.   But things turned uglier when Stephen remarried.  Thalia sued, charging that "her ex-husband's second bride was an unfit person to rear her children," reported the Daily News.  The article said Thalia "dug up an impoverished woman living on the outskirts of the French capital," whom she presented as the bride's mother. "The action created a furore [sic] in exclusive society on both sides of the Atlantic."
In the meantime, the Roses sold No. 57 in 1903.  It became home to the family of Michael W. Murphy and his wife, Annie.  The couple had three sons, William A., Joseph M., Edward J. and David J., and a daughter Ann.
With the outbreak of World War I Joseph joined the Army.  In 1918 he was promoted to Lieutenant.
Annie A. Murphy died on January 20, 1920.  Her funeral was held in the house two days later followed by a mass at the Church of the Holy Name on West 96th Street.
After 1926 No. 57 seems to have been operated as a high-end boarding house.  Then, in 1944, it was converted for the Studios of Music Education.  The renovations resulted in a "private school for music instruction" in the basement and parlor level, and a duplex apartment on the upper floors for the owner. 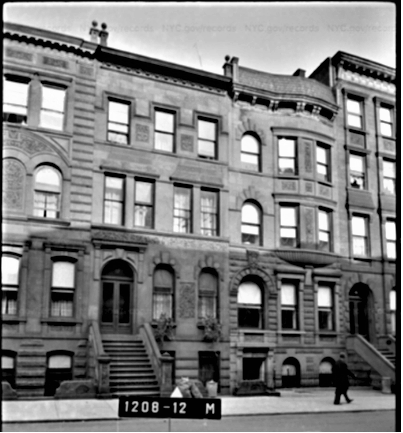 The house in 1941.  via the NYC Dept of Records & Information Services
The Studios of Music Education was established in 1934.  The 1939 Federal Writer's Project book New York Learns had explained, "It has long been an objective of music educators to correlate daily musical activities with elementary school lessons.  The Studios of Music Education pursues this combination."
By the 1960's the school was known as the New York School of Musical Education.  An unexpected fund raising project was the publication of the Squash Family Cookbook by Marjorie B. Zucker in 1977.  The New York Times food critic Craig Claiborne on July 17, 1978 called the book "modest but gratifying" and noted, "The book's profits are for a good cause, too: the School of Music Education in New York."
The school left West 94th Street around 1986 and the house was converted to an apartment in the basement, a duplex on the first and second floors, and one apartment on the third.  That configuration lasted until a renovation completed in 2007 brought the house back to a single family home. 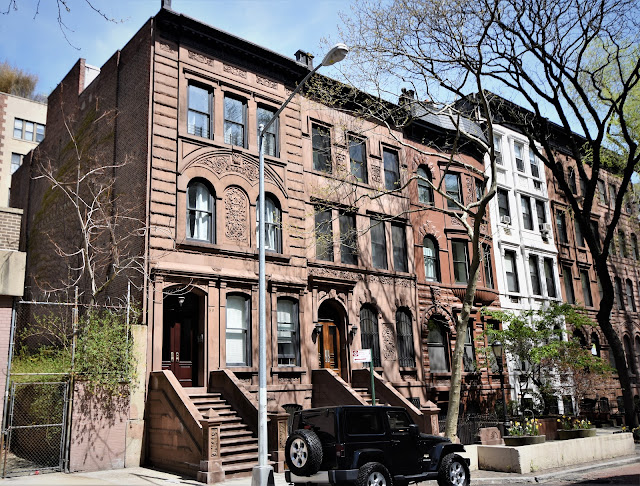 Only three of the original row of seven survive.
Despite half a century of institutional use, the exterior of the Millett house is nearly unchanged.
photographs by the author
Posted by Tom Miller at 1:11 AM