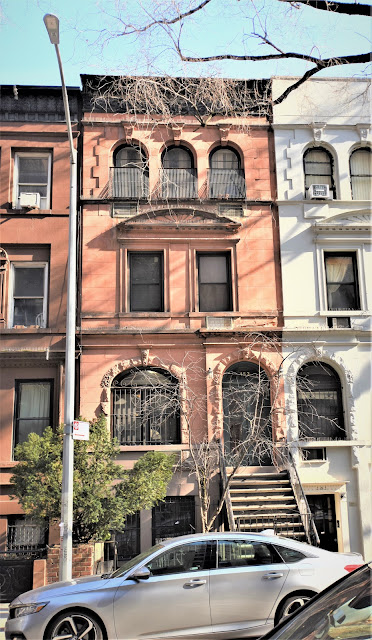 In October 1890 the architectural firm of Harding & Gooch filed plans for eleven three-story and basement houses on West 95th Street for Lottie H. Baird.  Located on the north side of the block between Columbus and Amsterdam Avenues, each would be 18-feet wide and cost $15,000 to construct--about $435,000 in today's money.
Completed the following summer, they were a blend of the Romanesque Revival and Renaissance styles.  The architects configured them as mirror image pairs in an AAA-B-B-A-A-B-B-A-A-B-B pattern (the odd number resulting in one trio at Nos. 145 to 149).
An advertisement on August 15, 1891 touted:

No. 153 was purchased by James and Mary Ann Kempster, who paid the equivalent of $610,000 today.  One of the "B" style houses, its high stone stoop led to the arched entranceway which was, like the parlor window, trimmed in undressed stone and graced with a foliate keystone.  The square-headed windows of the second floor sat below a floating arched pediment with fan carving, and the top floor openings returned to an arched motif. 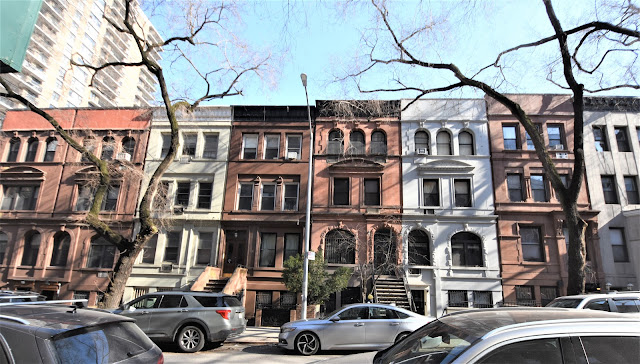 The row of houses, most of which have lost their cornices, were designed in mirror-image pairs.
Kempster was the principal in the James Kempster Printing Co., founded in 1877.  It was described by Electrical Review as "one of the best-known printing establishments in New York city."
The family had barely moved in when the population of No. 153 was diminished by two.  On November 30, 1892 The Standard Union ran two back-to-back wedding announcements entitled "Kempster-Heath" and "Mathews-Kempster."  The Electrical Review explained, "Mr. Richard Castle Kempster and Miss Louise Elizabeth Kempster, son and daughter of Mr. James Kemspter, of 153 West Ninety-fifth street, New York, were married Tuesday evening, November 29, to Miss Mable Heath and Mr. Theodore Wallace Matthews [sic], respectively."
The double wedding had taken place at the Mount Morris Baptist Church on Fifth Avenue and 127th Street.  The Standard Union reported, "After the ceremony, a reception was held at the Kempster residence."
The clanging of fire truck bells and the galloping steeds that pulled them roused the attention of reporters who rushed to the scene.  And on the evening of March 12, 1894 the scene was the Kempster house.  It was a false alarm that caused temporary confusion as to who called in the alarm, and more long-lasting discord between next door neighbors.
The Sun reported, "An alarm was turned in, and the department came flying to the corner, but could find no fire.  Everything was quiet, but in two houses in Ninety-fifty street, 153 and 155, there was an inward fire burning in the bosoms of two women."  It all started at 5:30 when Emily Rosenheim rushed into the Kempster house and announced, "Your house is on fire, Mrs. Kempster; the smoke is coming out of one of your chimneys."
According to Mary Ann Kempster, she responded, "That's all right; that is where the smoke always goes out."
"Yes, but it's on fire," insisted Mrs. Rosenheim.
Mary Ann sent a servant to check who found nothing out of the ordinary.  She told The Sun reporter, "I said, 'Why, there is nothing the matter with the chimney.'  Then she as much as said that I was a liar and went out, and her daughter in a few moments informed my daughter that they had turned in an alarm.  Pretty soon the department came.  The Chief went through the house, found no fire, and the department went away.  All I have to say is that some neighbors don't mind their own business the way they ought to."
The reporter went next door to get the Rosenheim side of the story.  Emily denied that they had sent in the alarm, saying "Somebody in the street did."
When told that the Kempsters said there was no fire, Emily shot back, "Well, they lie then."   With their neighborly relationship already at a breaking point, one can assume that the women's reading each others' words in the newspaper the following day ended it altogether.  In fact, the Rosenheims were no longer listed at No. 155 the following year, having possibly moved on to less contentious turf.
By then West 95th Street was lined with homes of financially comfortable businessmen and their families.  James Kempster was one of 40 other residents who, on October 2, 1895, sent a one-line request to the City Council.  In it they "respectfully petition for the laying of asphalt upon the pavement" of West 95th Street.
Well-to-do families spent the summer homes away from the stifling heat of the city.   Husbands necessarily came and went as business demanded, normally staying overnight at their social clubs rather than keeping their townhouses open.  The Kempsters purchased a site for their new country home in June 1899.  The Brooklyn Daily Eagle reported they had purchased "a tract of land on Saxton's Neck and boat house on Awixa Creek, Islip" from James J. McKenna and his wife.  The cost was $14,000; or about $445,000 today.
The Kempsters became active members of that summer community.  On July 7, 1900 the Times Union said that Bay Shore "enjoys the reputation of being one of the best 'club towns' on the Island" and noted, "There is an aristocratic organization known as the Olympic Club, which is composed of the New York and Brooklyn summerites in Bay Shore.  In wealth represented 'there's millions in it,' and for social style it ranks with the best in the Greater New York."   James Kempster was the president of the Olympic Club at the time of the article.
Around 1915 the Kempsters moved to No. 29 West 76th Street.  Their former home was purchased by Dr. Everett M. Hawks.  A graduate of the College of Physicians and Surgeons of Columbia University, he had been practicing genecology and obstetrics since 1902.
Dr. Hawks most likely would have faded into obscurity were it not for one set of celebrated clients.  On June 21, 1930 he was called to the home of aviator Charles A. Lindbergh and his wife, Anne Marrow Lindbergh.  Anne had just gone into labor.
This was no commonplace situation and he took along four specialists and a nurse, Marie Cummings (who, incidentally, had resigned her position as head nurse at a hospital in order to take part in this single event).   The baby, Charles Augustus Lindbergh,  arrived at 1:10 the following afternoon.  Two years later his kidnapping and murder would launch one of the greatest manhunts in American history. 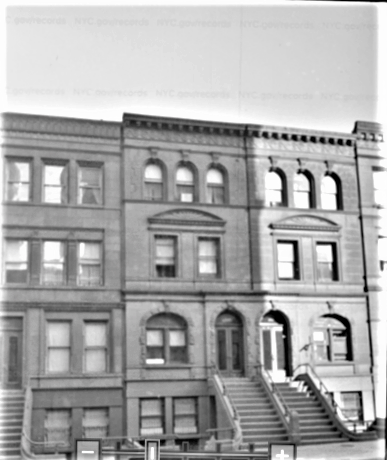 The paired stone stoops of 153 and 151 were intact in the 1940's.  via the NYC Dept of Records & Information Services
By the time of the Lindbergh baby's birth Dr. Hawks had been gone from No. 153 for several years.  In 1922 it contained apartments, one of which was home to Antone Sancher.  He was involved in a frightening accident that year.  On April 4 he was driving towards the intersection of DeKalb and Nostrand Avenues in Brooklyn where boys were playing baseball in the street.  He struck 13-year-old John Petrozits, who suffered a broken thigh and lacerations of the knee.
In 1968 the upper floors were returned to a single family residence, with two apartments in the basement level.  At some point after mid-century the stone stoop was replaced with a metal version, but on the whole the outward appearance of the home is intact.
photographs by the author
Posted by Tom Miller at 1:14 AM