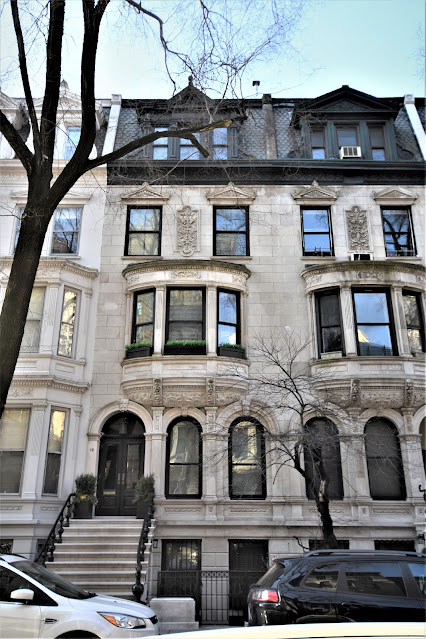 Builder George Holliday acted as his own developer and, most likely, as the architect of the four high-end residences at 10 through 16 West 95th Street, just west of Central Park.  He began construction on the Beaux Arts style homes in 1888.  Configured in an A-B-B-A configuration, they were completed the following year.  The mirror-image center houses, Nos. 12 and 14, featured arched openings at the parlor level, a bowed bay at the second, and pedimented windows at the third.  The fourth floor took the form of a slate-shingled mansard with windows grouped within a single dormer. 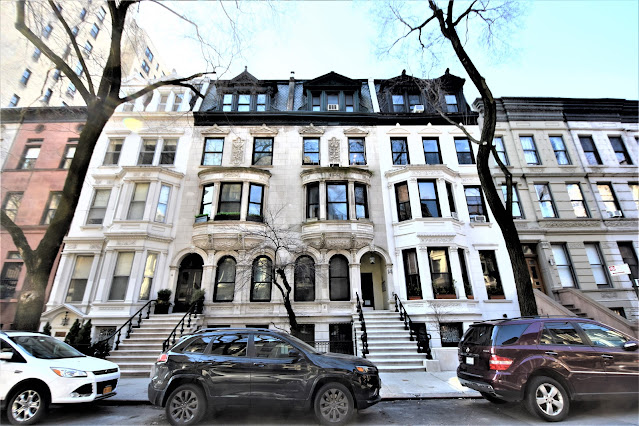 No. 12 is second to left among the handsome row.
Holliday seems to have had problems selling the homes.  On February 28, 1892, two years after construction was completed, he advertised:  "For sale, or might rent to a prospective buyer--Two elegant four story private Dwellings, 10 and 12 West 95th st...G. Holliday, Builder."
It would be another year before he found a buyer for No. 12.  On March 25, 1893 the Record & Guide reported that he had sold it to for $45,000--in the neighborhood of $1.32 million today.  It became home to the widowed Mrs. S. B. Smith whose daughter, Estelle Marian, was married to John J. Radley the following January.  The St. Patrick's Cathedral ceremony was officiated by Archbishop Michael Corrigan "in the full robes of his office," according to The Sun on January 17, 1894.
The following year the house was sold to Dr. David Penfield Austin and his wife, Sarah Adelaide.  As was common, the title to the property was put in Sarah's name.   Austin was an 1866 graduate of the Columbia College of Physicians and Surgeons.  He and Sarah had a daughter, Adelaide.
In July 1898, a single-line announcement appeared in The New York Press: "Sarah A. Austin sold No. 12 West Ninety-fifth street, a four-story brownstone front dwelling."  No one who read the notice was more surprised than the Austins.
On July 15 the New York Herald reported, "Dr. Austin, of No. 12 West Ninety-fifth street, denies the reported sale of that house.  He says the statement must have been given out by mistake for not only has the house not been sold, but it is not in the market." 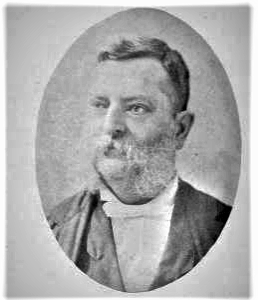 Dr. David Penfield Austin, Empire State Notables, 1914 (copyright expired)
The population of No. 12 increased by one following Adelaide's marriage to Oscar Falk.  The Austins now shared their home with the newlyweds.
When he awoke on March 19, 1918 Dr. Austin complained to Sarah that he felt dizzy.  Later that day he was found unconscious at the foot of the main staircase.  The 83-year-old had fallen down the stairs and fractured his skull.  He died shortly afterward.  The New York Times pointed out that he had practiced medicine for 55 years and "had lived at 12 West Ninety-fifth Street, with his wife, his daughter, and his son-in-law, Oscar Falk, for twenty-three years."
By the end of the year the Sarah leased rooms in the house to the family of Clarence Bloss Rogers.  The well-to-do Rogers had recently returned from serving in World War I.  A member of the American Institute of Engineers, he was now working in the Engineering Department of William Steele & Sons.  The family remained with in the Austin house until 1920 when they placed an advertisement in The Brooklyn Daily Eagle seeking: "Six or seven room apartment desired; residential or suburban section; adult Christian family.  Rogers, 12 West 95th St., NYC."
On February 22, 1923, Sarah Austin died.  Her funeral was held in the West 95th Street house two days later.  Adelaide Falk sold her home of nearly three decades later that year for the equivalent of $525,000 today.
The house was operated as unofficial apartments for a decade.  On January 25, 1926, for instance, The New York Evening Post reported that Rose Johnson and Lilah W. Hughes had rented "furnished apartments" in the house.  It was officially converted to apartments in 1933 by architect F. A. Burdett.
The occupants were middle class and respectable, like Murray C. Smith, "an advertising man," who lived here in 1937; and private nurse Helen Reilly, here by the early 1940's.
Helen Reilly took a job tending to the Mabel Maxwell Reed soon after the death of her husband, Kenneth M. Reed, in August 1943.  Mabel was described by the Daily News as a "socially prominent hostess."  She lived in a sumptuous apartment at No. 988 Fifth Avenue, across from the Metropolitan Museum of Art, and maintained a summer home in Prouts Neck, Maine.
Mabel's grief over her husband's death was severe enough to warrant a private nurse, although Helen did not normally stay overnight.  At around 1:30 on the morning of September 20 Helen was awakened by a telephone call from Mabel, who said she had swallowed iodine.  Helen rushed to the apartment where she found Mrs. Reed's lips burned.  She administered an antidote and, according to The Sun, "after Mrs. Reed seemed calmed down and otherwise all right, she retired."
The cook, Nina Stephens, entered Mabel's bedroom after 8:00 to wake her for breakfast.  She found her employer dead, "a plaited dog leash wound tightly around her neck."
The former Austin house appeared in the 1982 film Kiss Me Goodbye as the mansion of Sally Field's character, Kay.  In the film she shares the house with the ghost of her former husband, Jolly, played by James Caan, while trying to move on with her fiancé played by Jeff Bridges. 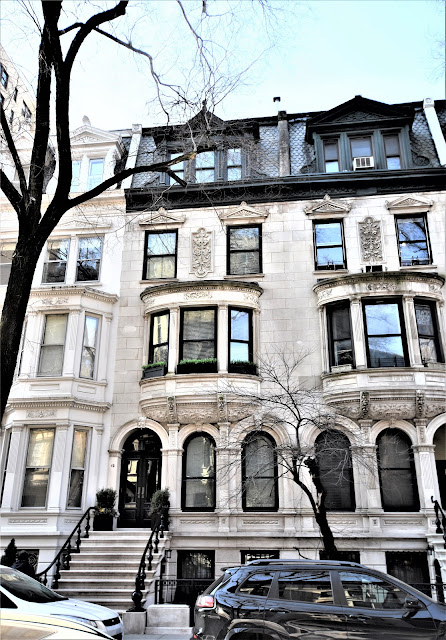 A renovation completed in 1996 returned the house to a single-family residence.
photographs by the author
Posted by Tom Miller at 1:10 AM