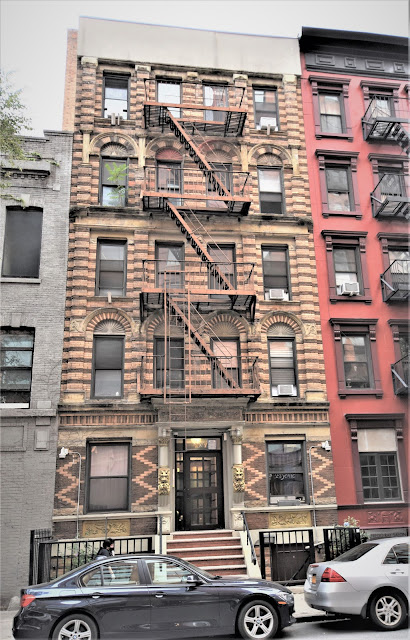 Architect and builder William Rankin was prolific in the 1880's and 1890's, buying properties, improving them with tenement or commercial buildings, and selling them at a dizzying pace.  Around 1881 he demolished the 25-foot wide house at No. 237 West 18th Street--home to city surveyor James Pollack in the 1850's--and set to work on a modern replacement structure.
He sold his newly-completed "five-story double tenement," as it was described in the Real Estate Record & Guide, to Ascher Weinstein.  Rankin had enlivened his Renaissance Revival design with a variety of blinding decorations.  The diapering of the brick on the first floor resulted in bold zig-zag patterns.  The alternating yellow brick and undressed brownstone of the next four floors created a striped effect, and the carved shells over the second and fourth floors were crowned with alternating brick and brownstone, resulting a Moorish feeling.  An ambitious cast iron cornice crowned the design.
The apartments were advertised in The Sun as "Elegant flats: All Improvements.  Three rooms, hot and cold water."  The tenants, however, were working class, many of them Irish immigrant families.
Among them was the Fenick family.  Walter Fenick was seven-years-old in 1887.  His father was a cartman, or delivery driver.  Walter rode along on November 5 that year and the following day The Sun reported that he "fell from his father's truck in West street yesterday and the wheel passed over his head and killed him."
Little Walter's body was brought to the 18th Street apartment and that night undertakers Eagan & Leake arrived to prepare the body for burial.  Helper Patrick Jennings waited on the street by the wagon.  While his back was turned two thieves made a macabre theft.  The Sun reported that he "saw two young men steal the black pall from the ice box."  (The ice box would be used to preserve the body during transportation, and the pall was the heavy cloth used to cover it or the coffin.)  Jennings took chase, arousing the attention of Policeman Cook who caught them on Seventh Avenue.
The family of laborer Archibald Henley lived here in 1893.  Christmas mornings were often meager in the homes of immigrant families, but it was non-existent for the Henley children that year.  Henry got paid on Christmas Eve and he did not come home.  Nor did he show up on Christmas Day.  Finally, after having spent his pay on a three-day drinking binge, he arrived home on the night of December 26.
His wife "upbraided him for spending his money in that way instead of buying presents for his children," reported The World.  In response, he picked up a lighted lamp and threw it at her, "severely burning her head, breast and arms."  The burning oil set fire to the table and other furniture and the fire department had to be called to extinguish the blaze.
The World reported that the damage to the apartment and the building was slight, and Mrs. Henley was treated by an ambulance surgeon (the equivalent of today's EMT) from St. Vincent's Hospital.  "Her husband was locked up in the West Twentieth street station."
A young tenant named Quimby was pulled into a scandalous court case in 1894 concerning his mother.  Around 1885 when he was still a teen, Augusta B. Quimby, a widow, was doing her best to rear four children.  She met John Russell, a fish and oyster seller in the Fulton Market.  The World reported, "She consented to live with him as his wife.  The union began Sept. 1, 1886.  There was no marriage ceremony."
The children came along with Augusta to Russell's home in the Bronx.  She had two more children with Russell, both of whom died.  Trouble began in 1889 when he left her--"no less than seven times," according to The World.   In 1890 they agreed to separate, he gave her $300 (about $8,700 today), but he soon begged her to come back to him.  And she did.
In 1892 things took a turbulent turn as Russell became physically and verbally abusive.  In court on February 14, 1894 she asserted that during the past year he "beat and otherwise violently abused her and used obscene language to her in the presence of her little girl."  The final straw came on New Year's Eve 1893.
She told the court that "he made her undress and go naked into a cold and unfurnished room at midnight and then locked the door upon her, leaving her there to freeze.  When he finally liberated her he called her vile names and beat her about the face with a hand-glass."
Now Augusta ran up against a problem in seeking support, since the couple had never married.  The World reported, "Her eldest son, twenty-four years old, lives at No. 237 West Eighteenth street.  Mrs. Russell has affidavits from him and the Rev. Joseph Reynolds...to the effect that Mr. Russell always introduced her as his wife."
The building continued to house working class tenants, many of them Irish immigrants.  In 1894 "Mrs. H." did sewing work from Apartment No. 2.  Her advertisement in The New York Times read "Seamstress--By a thorough family seamstress; good dressmaker; $1 per day."  (That rate would equal about $30 today.)
Another tenant, Mrs. McGrath, was looking for work as a cook or laundress in 1899, and in April 1894 Harold Mahoney described himself as a "young man, 20, energetic and willing [who] desires a place where he can advance himself." 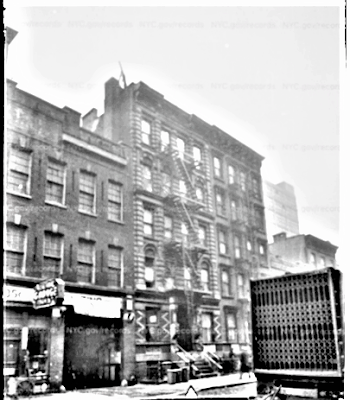 The cornice survived as late as 1941 when this photo was taken.  via the NYC Dept of Records & Information Services
Matthew Ryan lived in the building in December 1910 when he patronized Francisco Millilio's rather unorthodox business--a portable suitcase bar that he set up on the sidewalk at Sixth Avenue and 18th Street.  Mallilio sold eight kinds of whisky from his case, including "Hell's Dream, "Subway Rocks" and "Third Rail Splits."  The cost was 5 cents per shot.
Ryan had three drinks, and handed Millilio 15 cents as he closed his suitcase.  But Millilio demanded more money and the two got into a heated argument.  Before long Ryan was explaining himself to a judge.
"Finally, when he became so peevish, I could stand it no longer.  I called a policeman and had him arrested.  I wouldn't have done that, even after drinking his whisky, if he had not become peeved; but a man who sells whisky such as he had in that suitcase has no right to become peeved, no matter what price is offered for it," he said.
Magistrade Corrigan sniffed Millilio's wares, and "looked sternly at the prisoner, denounced him as a 'traveling street bar' and held him in $1,000 bail for trial," reported The New York Post on December 22.
Patrick Sweeney, a laborer, suffered a horrible accident on January 2, 1915.  The Philadelphia Enquirer reported that while walking in his sleep he "stepped from his bedroom window, on the sixth floor of 237 West Eighteenth street, rose and walked to the other side of the street, where he collapsed."  He was taken to Bellevue Hospital where he was diagnosed with fatal internal injuries. 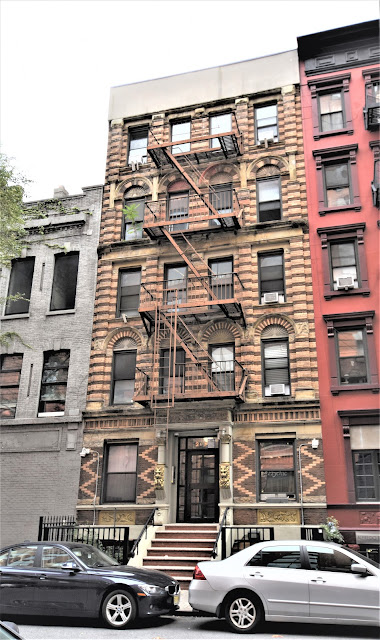 A renovation completed in 1990 resulted in four apartments per floor.  At some point the striking Victorian cornice was removed, leaving a blank concrete scar and upsetting the building's visual balance.  William Rankin's quirky, almost circus-like design nevertheless is as much an attention stealer today as it was in 1882.
photographs by the author
Posted by Tom Miller at 1:43 AM