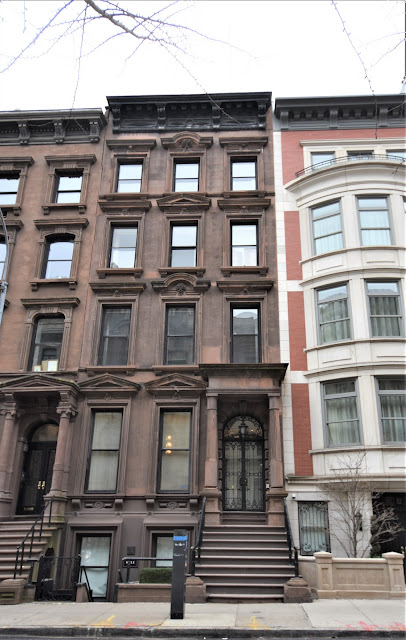 Robert B. and James G. Lynd were described by the Record & Guide as "well-known builders."   The firm J. G. & R. B. Lynd often acted as its own developer, as well, with Robert B. Lynd as the architect.  Such was the cast in 1872 when the brothers began construction on a 25-foot wide brownstone dwelling at No. 14 East 63rd Street, between Madison and Fifth Avenue.
Completed the following year, the four-story Italianate style structure featured Renaissance-inspired pediments over the parlor windows and the center openings of the upper floors.  A stately columned portico protected the arched entranceway.
The Lynd brothers targeted well-heeled buyers, as evidenced in their sale ad:

The electric bells mentioned in the ad referred to the system of servants' call buttons connected to the service areas. 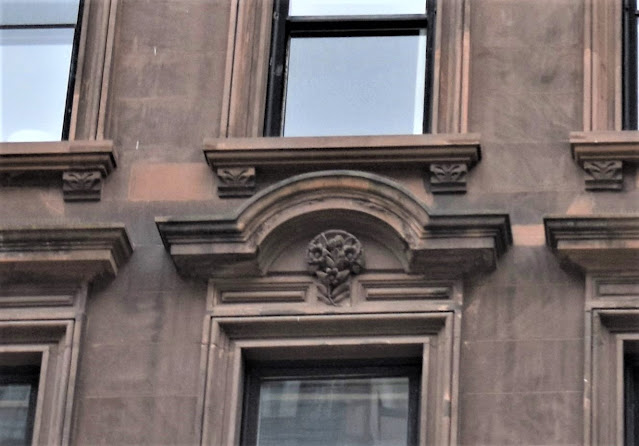 Charming carved bouquets decorate the arched lintels of the second and fourth floor openings.
The house became home to attorney William Conselyea Traphagen and his wife, the former Caroline Ross Maxwell (better known as Carrie).  Born in New Jersey in 1837, Traphagen was educated at Rutgers College, and by now had a successful private practice.
The couple had a two-year-old son at the time, John Maxwell, but would have four more children, John Conselyea, Eleanor Van Vorst, Caroline, and Ethel.  The family's summer home was in Nyack, New York.
Daughter Ethel, who was born in the townhouse in 1882, went on to study at the National Academy of Design, becoming a fashion designer.  In 1923 she opened the Traphagen School of Co-operative Fashion, one of the first schools dedicated to fashion design and illustration.
Decades before that, the East 63rd Street house was shuttered for a two-year period starting in 1887 when William Traphagen was elected to the State Senate.  In May 1893 his ill health prompted him to move his family permanently to the "spacious and attractive" Nyack home, as it was described by The New York Times.  He died there a year later, on October 27, 1894.
Traphagen had sold No. 14 East 63rd Street the wealthy, 71-year-old bachelor Alonzo Castle Monson for $71,000--just over $2 million today.  A former judge of the California Supreme Court, he was a founder of the Knickerbocker Club and was the treasurer of the New York Jockey Club.
Born in 1822 on Varick Street, he was the son of Captain Marcena and Eliza Monson.  Among the family's neighbors were the Hamilton, Lydig and Minturn families.  The New York Times later recalled that Captain Monson "was fond of entertaining, and many noted persons were guests under his hospitable roof.  Charles Dickens was once a guest at the old mansion, as were Commodore Perry and Gov. Marcy, who was afterward Secretary of State."
Bachelorhood did not mean that Monson lived alone.  Moving in with him were his sister, Ann Eliza Morris, the widow of former Mayor Robert Hunter Morris, and his great-nephew and niece, Monson and Helen Van Cortlandt Morris. 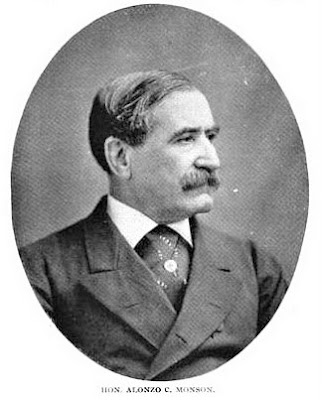 Alonzo C. Monson (original source unknown)
The aging Monson did his best, with the help of his sister, in properly rearing his young wards.   When they moved into the 63rd Street young Monson Morris was attending Columbia College and Helen's debutante season was only a few years off.   On December 28, 1894 The Evening World announced, "Judge Monson, of No. 14 East Sixty-third street, gave a dance for the younger set last evening at his home."
The year 1897 was a significant in the household.  Monson graduated from Columbia that year, and that winter was Helen's debutante season.   On December 15 the New-York Tribune reported, "Miss Helen Van Cortlandt Morris was formally presented to society yesterday at a tea given in her honor by her uncle, Alonzo C. Monson, at his home, No. 14 East Sixty-third-st.  Mr. Monson will give a debutante dinner to-morrow night in honor of his niece." 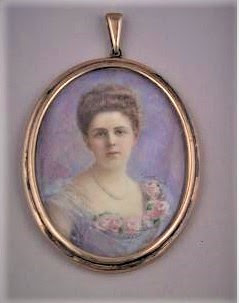 This delicate ivory miniature was painted the year of Helen's debut.  from the collection of the New-York Historical Society
In 1898 Monson began construction of a new country estate, Mon Repos (My Rest) at Southampton, Long Island.  On May 6, 1899 Brooklyn Life reported "Ex-Judge Alonzo C. Monson's new cottage, commenced last fall, is now ready for occupancy.  Miss Helen. V. C. Morris and Mr. Monson Morris will reside with Mr. Monson this summer.  Mr. Monson has lately been elected a member of the Meadow Club, by the way." 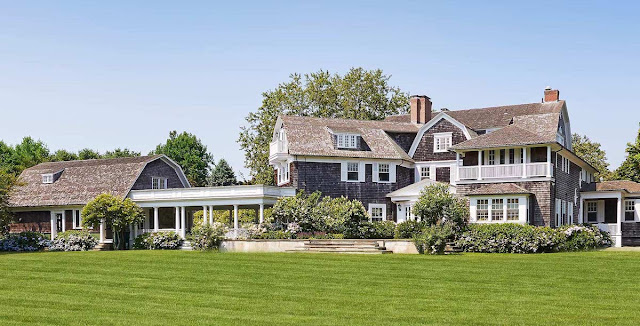 Mon Repos as it appears today.  Image via pricepads.com
Alonzo Monson and Helen sailed for Europe later that season.  On the night of September 6 a fire that broke out in No. 12 East 63rd Street spread to the cornice of the Morris house.  The World reported, "The firemen chopped away part of the roof of No. 14, and believed that the blaze was extinguished after a little water was thrown on it."
That was not the case, however.  As Monson, Ann Morris and their servants slept, the embers erupted into flames.  Two policemen noticed smoke rising from the roof and sent in an alarm.  "The firemen had to cut three holes in the roof before they could quench the flames," said the article.  It added that Monson and his aunt "got out unhurt.  So did the servants."
Early in April 1900 Ann Eliza Morris caught a cold.  The 91-year-old died a week later.  Her funeral was held in the Church of the Incarnation on Madison Avenue on April 11.
Within the year, in February 1901, Alonzo Monson sold No. 14 to real estate operators William and Thomas Hall for the equivalent of $3.4 million today.  The brothers were responsible for erecting scores of upscale dwellings under the firm name of W. W. & T. M. Hall.  They hired the architectural firm of Welch, Smith & Provot to do $20,000 worth of interior renovations--about $621,000 today.  Included were new stairs and walls and an elevator.  Interestingly, at a time when out-of-date brownstones were being remodeled into modern American basement residences, the exterior appearance of No. 14 was not altered.
The remodeled residence was sold to Elizabeth Millan Stevens, the widow of John Rhinelander Stevens.  With her in the house was her 23-year-old daughter, Lucille Millan Stevens.
Although young society women tended to marry soon after their debuts, it would be more than a decade before Lucille wed.  In March 1912 Elizabeth announced her engagement to U. S. Navy Lieutenant Edward E. Spafford.  The Sun noted that he "is on duty at the Ordnance Office in Washington."
The wedding took place in St. Bartholomew's Church on May 22.  Tragically, less than two years later, on February 20, 1914, Lucille died in her Washington, D.C. home.
The loss of her only child may have been too much for Elizabeth to bear.  Two months later, on April 18, she died in the 63rd Street house at the age of 74.  The New York Times noted, "Mrs. Stevens was prominent in society until her husband died in 1889, when she became interested in philanthropic work."
Elizabeth left her estate, about $22 million in today's money, in trust to her granddaughter, Lucille Spafford.  The tiny heiress was not yet two-years-old, prompting the Washington D.C. Evening Star to dub her "the million-dollar-baby."
Included in the inheritance was No. 14 East 63rd Street.  Edward E. Spafford and his daughter moved in by 1916.  Still in the United States Navy, he was now an officer in the American Society of Naval Engineers in New York.
Little Elizabeth was tended to by servants when the United States entered World War I.  In 1919, after her father returned home, he was awarded the Congressional Medal for Bravery in 1919.  He was again honored on February 5, 1929 by Paul Claudel, the French Ambassador, who awarded him the Legion of Honor.  The New York Times noted, "the honor was conferred by the French Government for services during and after the World War."
In 1944 No. 14 was renovated into a four apartments.   The well-to-do residences over the next few years included the family of Cord Meyer,  Naval Admiral and oil magnate Andrew Francis Carter, and former race car driver and vice president of the Marnier-Lapostolle, Inc. wine and liquor importing firm, Jules Pierre Ortieg.
The house was returned to a single-family dwelling in 1994, with a commercial space in the basement.  In the first years of the 21st century it was home to the David Lawrence Studio, the Gering & Lopez Gallery and most recently the Sandra Gering art gallery. 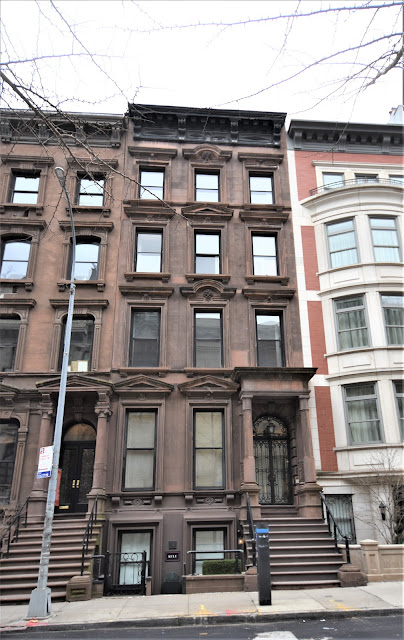 The 18-room house was sold for a staggering $22.5 million in June 2015.  The New York Times mentioned that "it has retained many original architectural features, including the front stoop, grand staircase, detailed high ceilings and wood-burning fireplaces."  The article noted seven bedrooms and five baths.
photographs by the author
Posted by Tom Miller at 1:26 AM