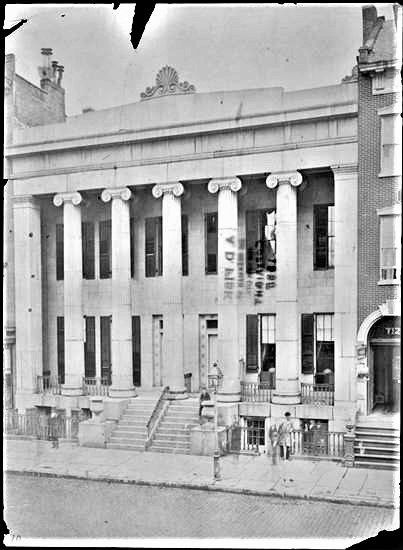 In the 18th century Elbert Herring's vast land holdings, known as the Herring Farm, stretched west from The Bowery to Christopher Street, and north from approximately today's Houston Street to Waverly Place.  His estate was divided among his heirs, with Nicholas Herring inheriting the section of land bounded by Broadway (then known as Great George Street at this point) east to Lafayette Place.   He quickly sold the land on May 12, 1789 to Anthony L. Bleecker for $812, who divided it into fourteen building lots.

The two northernmost lots were purchased by Elisha Bloomer, a hatter, on June 1, 1833.  The price, equal to just under half a million in today's dollars, reflected the fact that the former pastureland was gradually transforming into a fashionable residential district.  Federal style mansions were rising along Broadway and the adjacent streets.
In 1831 Seth Geer had erected a stunning row of marble mansions, La Grange Terrace, on Lafayette Place based on the English model of grand homes built to appear as a single structure.  Elisha Bloomer now constructed a miniature version of Green's striking project--two mirror image, white marble mansions at Nos. 714 and 716 Broadway which he called the "Colonnade Houses."
Completed in 1836, Bloomer sold the 25-foot wide homes for $30,000 each--about $850,000 today.  He included restrictive covenants into the deeds, demanding "whereas the two houses are built in such style and manner as to present an entire front of great beauty and elegance, and the marring and defacing or alteration of either might depreciate the value of the other," neither could be altered without the consent of the "neighboring owner." 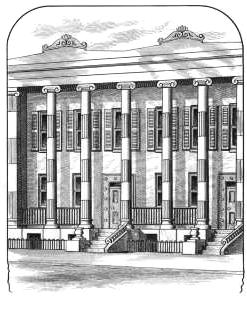 from Early New York Houses, by Williiam Smith Pelletreau, 1900 (copyright expired)
No. 714 was purchased by Smith Ely.  A member of the legal firm Bartlett & Ely, he was married to the former Abigail Belknap Bartlett.  The couple had a daughter Adelaide V.
The Ely family were members of the Second Congregational Church.  As fashion flowed northward, a new church building, now known as Church of the Messiah, was erected at Nos. 728-730 Broadway, conveniently close to the Elys' home.  It was completed in 1839, and its congregants purchased their personal pews, the prices depending on the location.  On May 14 the Morning Herald reported on the sale.  Smith Ely had paid $1,050 for his family's pew--just under $30,000 in today's money.
In the meantime, John Moon had purchased No. 716, and immediately leased it to Philip and Catharine Dunscomb Hone.  Hone had served as mayor of New York City in 1826-27.  A wealthy merchant, he was a founder of the Mercantile Library Association and the first president of the Delaware and Hudson Canal Company.  Like his neighbors, he and Catharine had moved northward with the tide of fashion.  They had previously lived in an elegant residence on Broadway across from City Hall Park.
Living with their parents were the still unmarried John P. and Margaret Hone.  There were four other adult children, Mary S. (who had married John Jones Schermerhorn four years before her parents moved into No. 716), Robert Swartwout, Philip, and Catherine Blatchford.
New York newspapers did not hide their political affiliations.  The Morning Herald was staunchly anti-Whig and took every advantage to disparage Hone.   When a marble bust of the broker and politician by Shobal Clavenger was unveiled at the Apollo Gallery in July 1839, for instance, the newspaper managed to combine its praise for the sculptor for its disdain of the sitter:

It is a marked, peculiar, and striking likeness of the original--with great and extraordinary merit as a work of art.  The young artist has thrown into the features of Mr. H., a great deal more intellectual expression than we ever saw the original breath forth in Wall street or at the dinner table.

And when the Whigs nominated Hone for office four months later, the newspaper let loose its animosity.  Saying that the party's "connection with abolition" was enough "to ruin any party" it added, "But, as if this was not sufficient to disgust the people, the Wall Street clique nominated Philip Hone, one of the most unpopular candidates that could have been selected in New York...The consequences of the arrogant, unwise, fooling stock-jobbing management is thus before us."
A separate article went even further, saying the Whigs "put up Philip Hone, a most obnoxious man, as their particular candidate, which caused the disgust of many and the defeat of the whole ticket." 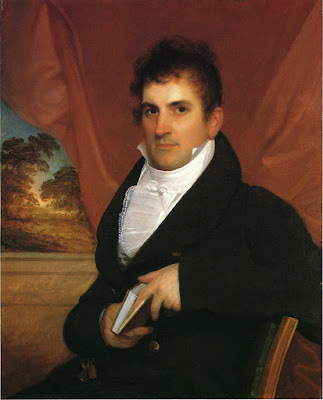 John Wesley Jarvis painted Philip Hone's portrait in 1809.  from the collection of The Athenaeum
In fact, most New Yorkers admired Hone and he and Catharine were important members of high society.  Known for their considerable travels and sophistication they were on the guest lists of every ball and important social event.  Among Hone's close friends were Daniel Webster, John Jacob Astor, Washington Irving and Presidents Martin Van Buran and John Quincy Adams.
The Financial Panic of 1837 seriously affected Smith Ely and John Moon.  Both houses were lost in foreclosure in 1841.  On April 30 auctioneer E. H. Ludlow auctioned the Elys' "elegant furniture" on the premises of "No. 714 Broadway, Marble Colonade Building."  Included were mahogany parlor furniture, two pier mirrors which had cost $365 in 1836 (more than $10,000 today), and a "city-made Piano Forte."
On February 4, 1842 the City Fire Insurance Company advertised: "Dwellings in Broadway--For Sale.  Those two Collonade [sic] marble front Houses, Nos. 714 and 716 Broadway."
But the effects of the financial depression prevented their being sold for several years.  Finally in 1844 attorney Charles Goadsby Ferris and his wife, the former Catharine Young, purchased No. 716.   The couple had one daughter, Caroline Adelia.
Charles's father, Edward Ferris, was one of the founders of the Tammany Society.  His mother, Elizabeth Goadsby, was the daughter of Sir Thomas Goadsby of England.
Not surprisingly, Ferris was a Democrat.  He had served in Congress in 1841-43 and was instrumental in appropriating funds to erect the first telegraph line.  The year he purchased No. 716 he was nominated for the position of Collector of the Port of New York by President John Tyler, but was rejected by the United States Senate.
Like the Philip Hones, Charles and Catharine Ferris had notable house guests, such as inventor Samuel Morse.  But none was more noteworthy than Napoleon III.  According to Charles's great-nephew, Charles E. Crowell, in his 1898 Partial Genealogy of the Ferris Family, Charles Ferris "introduced the late Napoleon III, to President Tyler, and the compiler's mother has told him that she frequently dined with Napoleon at her Uncle Charles' house on Broadway, opposite West Washington Place."
Charles Goadsby Ferris died in his marble mansion on July 10, 1848.  Catherine and Caroline Adelia remained in the house, joined by Caroline's husband Glover Clapham whom she married in 1850.  Clapham died within a year of their wedding and in 1851 Caroline married Samuel Lewis
In the meantime, No. 714 had been home to physician Francis E. Berger, who sold it in 1852 to another doctor, Samuel S. Fitch.   Drs. Calvin M. and Josiah P. Fitch worked in their father's practice, and Calvin lived in the house with his parents.
Samuel Fitch was the author of the well-known book Dr. S. S. Fitch's Six Lectures.  On December 14, 1852 he announced in the New York Herald:

Dr. S. S. Fitch, author of six lectures on the prevention and cure of consumption, asthma, diseases of the heart, &c, has removed his office from 787 Broadway to 714 Broadway.  All examinations of the chest and heart and whole case, and medical opinion and advise, always gratis.

Fitch wrote a second book in in 1859, and another in 1861.  His lecture work demanded that he be away from New York and in 1866 he took on two associates, Drs. L. E. King and E. B. Chambre.  His announcement explained, "During my absence I submit to them with complete reliance the conduct of my practice." 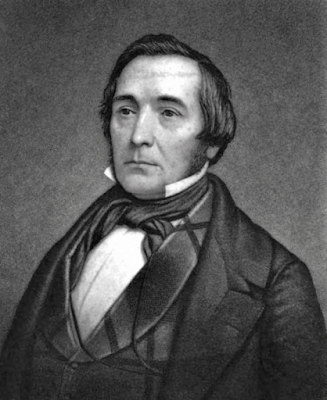 On March 29, 1873 Fitch was returning to New York from Massachusetts when the train in which he was traveling wrecked.  Newspapers widely reported on his death.  A month later an announcement appeared in the New York Herald saying in part, "Some out-of-town papers having stated that his injuries were fatal, we desire them to deny the statement, as he is rapidly improving and out of all danger."
Meanwhile, Samuel and Caroline Adelia Lewis continued to occupy No. 716.  In 1874 son Samuel Ferris Lewis was a sophomore at Columbia University and his brother Charles Ferris Lewis was studying at Columbia University's Law School.
Dr. Fitch left No. 714 in 1878.  By now this section of Broadway had seen the encroachment of business for more than a decade.  The elegant marble house was renovated that year for business purposes and became home to the bookseller A. C. Armstrong & Son.  The firm sold religious books like the Introduction to the Study of Philosophy, The Expositor's Bible, and The Bible Doctrine of Inspiration.  Also in the building were the Monarch Skirt factory and wholesale clothiers Morris, Davis & Saloman. 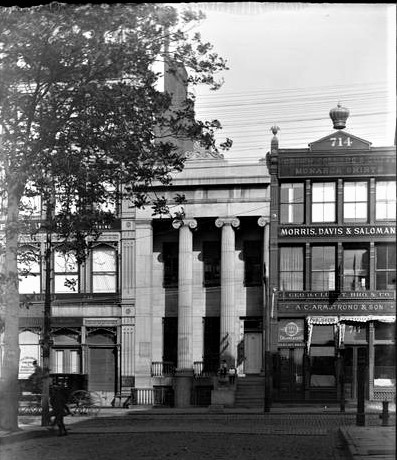 The Lewis house remained unchanged, an anachronism next door to its drastically altered former twin.  from the collection of the New-York Historic Society
On August 14, 1888 Caroline Ferris Lewis died at the age of 69 in the marble residence she had called home for more than four decades.  Eight months later, on April 26, 1889, The New York Times reported "The old mansion at 716 Broadway will soon be torn down.  It was sold yesterday...together with the other real property of Charles G. Ferris."  The article noted, "The house was occupied by his daughter until her death recently" and said the buyers, Scholle Brothers, "will have it torn down without delay and a new building put up."
A. C. Armstrong & Son remained in the altered No. 714 until its sale in 1893.  It was replaced by an 11-story commercial building designed by Buchman & Deisler.  It and the Alfred Zucker-designed building at No. 716 survive. 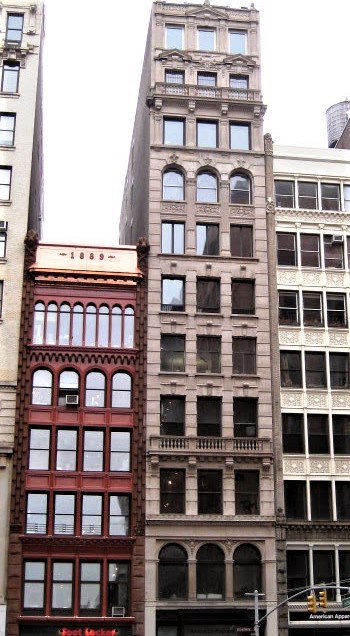 photograph by the author
many thanks to historian Anthony Bellov for prompting this post
Posted by Tom Miller at 1:14 AM