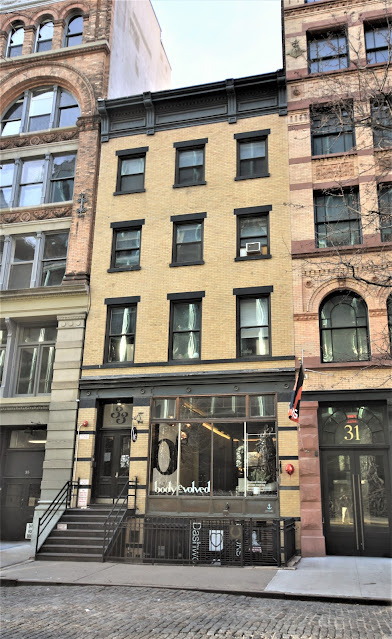 In 1831, shortly after builder Timothy Woodruff completed construction on the 25-foot wide brick house at No. 33 Bond Street,  it was purchased by Benjamin F. Lee and his wife, the former Jane Lawrence.  Sitting in one of the most exclusive residential districts of the city, their new Federal style home was three-and-a-half stories tall.  A short stoop led to the parlor floor and one or two dormers originally poked through the peaked roof.
Lee was described by Valentine's Manual of the City of New York as "one of New York's famous old merchants."  He had been a pioneer in the development of vulcanized rubber "under the Goodyear patents," according to Valentine's Manual, "and made a fortune in that business."  Lee had recently been a partner with Thomas Lord in the firm of Lord & Lees, but was now engaged with Paul Babcock in Lee & Babcock.  (The location of Lee's new house may have been a bit awkward, since Thomas Lord lived directly across the street at No. 32 Bond Street.)
Jane Lawrence Lee was known as "a celebrated beauty," according to the manual.  Her portrait by Charles Cromwell Ingham, entitled The White Plume, became famous within her lifetime. 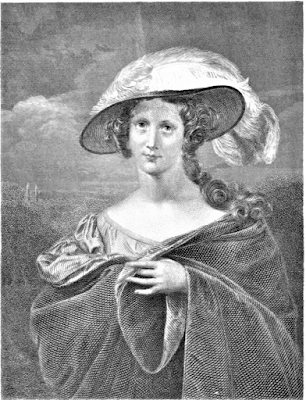 Charles Cromwell Ingham was a founder of the National Academy of Design.  His portrait of Jane Lee created a sensation.  from The Moss Rose, 1854 (copyright expired)
The Lees did not remain on Bond Street for especially long.  It was advertised for sale in The Evening Post on January 16, 1834.  It was purchased by attorney Jonathan J. Coddington, who resold it in 1836 to Amelia Staples.
Amelia was the widow of John Staples.  Living with her in the Bond Street house were her son, William J. Staples, and his wife Hanna.  William was a well-to-do attorney and developer.  When the family moved into No. 33 he was actively involved in developing a section of Staten Island in partnership with politician Minthorne Tompkins.
In 1832 they had acquired a large parcel of land from the Vanderbilt family--part of the family farm where Cornelius Vanderbilt I was born.  They laid out streets for a new village named Stapleton.  Four years later they began marketing the new community and initiated a ferry service from Manhattan.
In 1847 William was appointed Consul to Le Havre, France.  With her son and daughter-in-law gone, Amelia took in a boarder that year, broker William M. Clarke whose office was at No. 62 Wall Street.   She died in 1852 and the following year William Staples listed "the first-class dwelling."  His ad offered "with furniture, if desired."
Amelia's mother's personal wealth was reflected in the other properties being sold to settle the estate.  Included was a house on Cherry Street, and three lots on Ninth Avenue and 16th Street.  William Staples apparently changed his mind about selling No. 33 Bond Street and in 1854 the title was transferred to Hannah.
Catharine Taylor purchased No. 33 in May 1885 for $16,000--about $435,000 in today's money.  She was the wife of Washington H. Taylor who operated a hotel on Park Row.  Catharine purchased the property as an investment, and in September 1888 transferred the title to her sister, Margaret Barnes.  The problem was that Washington Taylor was not aware of the transactions nor that the women were using his money.
In February 1889 he discovered that his wife, who had access to his safe, had absconded with more than $1.15 million by today's standards.  He left her and then filed suit against the two women to "recover property which he claims his wife purchased with money misappropriated from his safe."  Included, of course, was No. 33 Bond Street.
Catharine Taylor's purchase of the house as an investment was a wise move.  At the time the Bond Street neighborhood had changed from residential to commercial and small businesses filled the once-elegant homes which had not yet been demolished and replaced.  By 1896 Joseph Lowenstein's feather business operated from the building.  That year he employed six men, six women and two teen-aged girls who worked 55 hours each week.
Lowenstein's premises were protected by an early example of an electric burglar alarm which proved its worth on August 11, 1897.   The Sun reported "A burglar alarm saved the feather factory of Joseph Lowenthal [sic] early yesterday morning, not from looting by robbers, but from destruction by fire."  A fire had started in the room where dyed feathers were laid out to dry at around 1:00 in the morning.  It spread up the woodwork to the office on the floor above.
"The flames snapped the tiny wire of the alarm and the bell rang furiously in the offices of the burglar alarm company," said The Sun.  Private detectives rushed to the scene to surprise the burglars.  "Instead they found the fire, and by giving the alarm had the firemen there soon."  Lowenstein's losses were about $64,000 in today's money.  But his burglar alarm had prevented the possible complete destruction of his business.
The anachronistic Lee house was surrounded by modern loft buildings at the time.  In 1901 real estate agent J. Jamison Raphael appeared in court regarding a property dispute in the neighborhood and was asked to assess other buildings.  In testifying he said in part, "I know the premises 33 Bond Street.  The building upon that property is of no particular value."
It was owned by Bernard H. Smith in 1908, who leased it to David Birnbaum for his fur factory.  Smith owned several buildings along the block and was apparently more interested in the rental income than the working conditions.  A factory inspector that year slapped Smith with three violations for Nos. 33, 27 and 23 Bond Street for the unsanitary conditions of the restrooms.
In November 1908 Harry Gorrfine and an accomplice were foiled in their attempt to rob Birnbaum's fur factory.  They were both sentenced to a year in prison, but Gorrfine quickly escaped.  Astoundingly, two weeks after his first attempt, a detective spotted him slipping back into No. 33 Bond Street on the afternoon of Saturday November 28.  What Detective Wilbur did not realize that Gorrfine had two cohorts already inside the building.
Wilbur rushed to a telephone and called headquarters for help.  As he ran back to No. 33 Gorrfine was just coming out with a large bundle.  Wilbur "nabbed him and took him back into the hallway," according to The Sun.  When two other officers arrived, they took their captive back upstairs.  "The minute they opened the door the other two thieves made a rush to get by, but were collared."  Police reported that inside Birnbaum's factory were bundles of furs worth $10,000 that the thieves had prepared to be remove--more than a quarter of a million in today's dollars.
In April 1911 the architectural firm of Cleverdon & Putzel was hired to renovated the old house to an efficient loft building.  They raised the attic to a full fourth floor and added a pressed metal cornice that harkened to the Italianate style of a decade earlier. 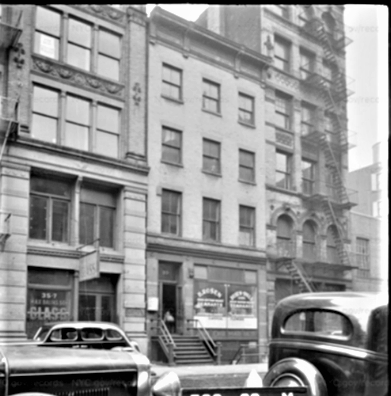 In 1941 B. Rosen's remnant store occupied the parlor level.  via the NYC Dept of Records & Information Services.
Throughout most of the century the building would house small businesses like the Forlin Hat Company, here in the 1920's.  Then in 1996 a renovation resulted in an art studio in the basement and first floor, home to 33 Bond Street Architecture Design, and living-working quarters on above. 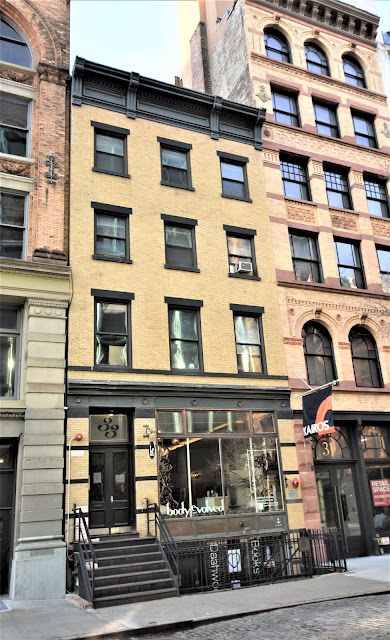 The commercial space became home to Vitsoe in September 2009.  The gallery-type store offered shelving systems and chairs designed by Dieter Rams.  Vitsoe remained until around 2017.  Today the basement level is home to Dashwood Books, which arrived approximately in 2010, and the physical therapy studio Body Evolved occupies the first floor that was once filled with the elegant furnishings and paintings of Benjamin and Jane Lee.
photographs by the author
Posted by Tom Miller at 1:08 AM