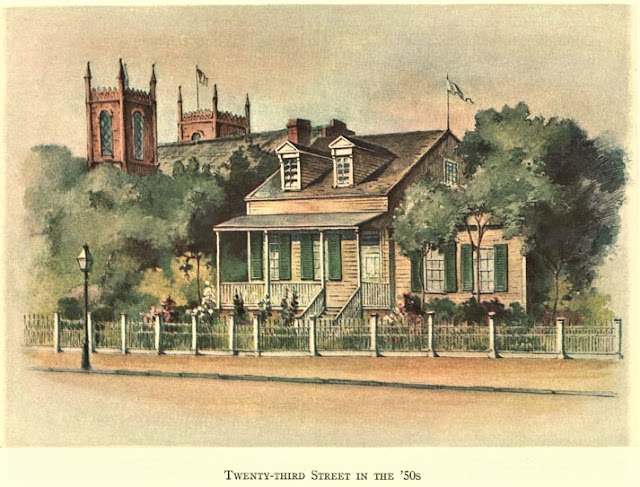 The Tiemann house was a slice of rural America within the city in the mid-19th century.  In the background are the towers of the Fourth Avenue Presbyterian Church.  from Henry Collins Brown's "Fifth Avenue Old and New 1824-1924) copyright expired.
Anthony Tiemann was born in Carlshafen, Germany in 1778.  At the age of 17, in order to avoid military duty, he relocated to England.  Two years later he took the bold move to travel to America.  In his 1858 The United States Democratic Review, Conrad Swackhamer recalled, "Landing in the city of New York with a capital of just a single English pound, he at once commenced a career of industry and honesty."
Around 1801 Tiemann married Mary Newell.  Her first American ancestors were Anthony Newell and his wife, who landed in Charleston, Massachusetts around 1630, and Nicholas Wyeth who settled in Cambridge, Massachusetts about 1640.
The young couple initially moved into a house on Nassau Street, where their first son, Daniel F., was born on January 9, 1805.  There would be three other children, Mary Ann, Julius W., and Nicholas S.
By then the family had moved far north of the established city.  In 1806 Tiemann had begun experimenting with the manufacture of colored paints (white lead paint had been developed in Philadelphia two years earlier).  In 1807 he "built for this purpose the pioneer establishment in the country, in the vicinity of the south-west corner of Twenty-third-street and Fourth avenue, then considered far out of the city," according to The United States Democratic Review.  Tiemann moved his family into a charming farmhouse nearby, at what would later be numbered 40 East 23rd Street.
Tiemann's success in creating colored paints changed the industry.  In 1895 historian Chauncey Mitchell Depew, writing in 1795-1895, One Hundred Years of American Commerce, noted "His first products were rose pink, Dutch pink, French green, and blue.  The manufacture of Prussian blues was begun in 1809, and in 1820 chrome yellow was added to the products of this firm."
The inventive Tiemann did not limit his efforts to paints.  On July 8, 1818 the Lancaster Intelligencer reported that he had acquired a patent for his dog-powered engine (apparently a type of hamster-wheel).  He had already been using dog power in his factory and insisted that "able dogs can easily be procured and trained for this object."  The article noted, "Those which Mr. Tiemann has employed for some years, have invariably been healthy and robust, and apparently delighted with their employment."
Tiemann's application listed the uses for his machinery, including:

Tiemann told a reporter that he "intends to apply the same power for propelling boats, for which he has also obtained a patent."
In 1829 Tiemann's paint factory had grown to the point that he erected a new, substantial plant in the village of Manhattanville, near the Hudson River around 120th Street.  Interestingly, while the family erected a second residence near the new factory, they retained possession of the wooden 23rd Street house.  (This may have been partly due to son Daniel's political aspirations.   Historian J. Frank Kernan recalled in 1885 that in 1838 he "resided on the corner of Twenty-third Street and Fourth Avenue, and represented the old sixteenth ward in the board of aldermen.") 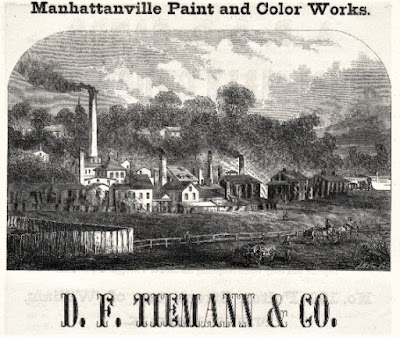 The sprawling paint Manhattanville paint factory around 1850.  original source unknown
In March 1834 the Anthony Tiemann & Co. was reorganized as a co-partnership with Anthony as president and his three sons as partners.
Mary Ann was married to Charles Davis in the family's Manhattanville house on July 21, 1836.  Tragically, she died at the age of 22 just seven months later, on February 12, 1837.
Daniel F. Tiemann, his wife and son were still living in the East 23rd Street cottage with his parents.  He was the only alderman in the district.  On July 4, 1839 he left the house with his son, headed to the Harlem Railroad train depot at the corner of 23rd Street and Fourth Avenue (where the former paint factory had stood).  Just as they were leaving, his wife called him back "with a request to take a cup of coffee," said The United States Democratic Review.  "He did so, and this delay, in all probability, saved his life and that of his son."
Their train had pulled into the station by the time they left the house.  They were about 100 yards from the depot when the locomotive's boiler exploded.  The United States Democratic Review reported, "several persons were instantly killed and a large number of others dangerously scalded and wounded."  As the only city official around, Daniel Tiemann took control of the situation, sent for physicians and other assistance and appropriated wagons to transport the wounded.
In 1858 Daniel was elected Mayor of New York City.   In reporting on his New Year's Day reception Harper's Weekly wrote, "Prominent among the visitors was Mr. Anthony Tiemann, the father of Daniel F. Tiemann.  Father and son heartily congratulated each other.  The venerable father then took his seat near where his son was standing, and his countenance beamed with joy and happiness, while the unceasing tide of well-wishers pressed on and passed away." 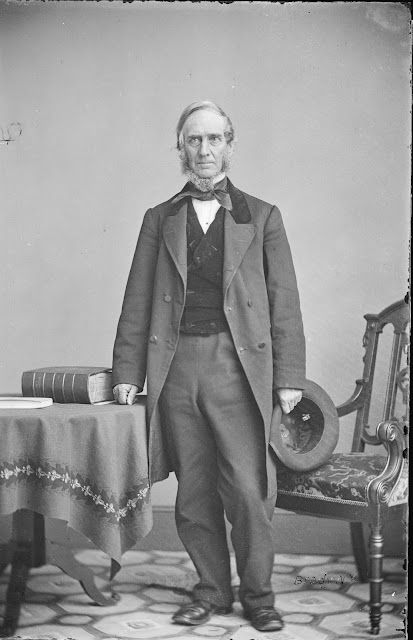 Daniel F. Tiemann, from the collection of the Smithsonian's National Portrait Gallery
Somewhat surprisingly, despite their wealth and new status as parents of the mayor, Anthony and Mary continued to live in the little wooden cottage.  It was by now a curiosity, surrounded more and more by modern dwellings as the city continued to push northward.  In 1847 Madison Square had been opened just steps away to the west and was increasingly ringed by high-end homes.
On December 23, 1862 Anthony Tiemann died at the age of 84 in the farmhouse he had called home for nearly six decades.  The amount of his estate was kept private, although the New York Evening Express mentioned that he left $500 to the First German Methodist Episcopal church--just over $13,000 in today's money.
Mary survived her husband by two years.  She died at the age of 78 on December 29, 1864.  The New York Times reported, "The funeral will take place on Saturday, Dec. 31, from her late residence, No. 40 East 23d-st., at 1 o'clock."
Mary Tiemann's funeral was perhaps the the last gathering in the venerable wooden house.   It was demolished in 1868 to make way for the massive Young Men's Christian Association building designed by James Renwick, Jr. 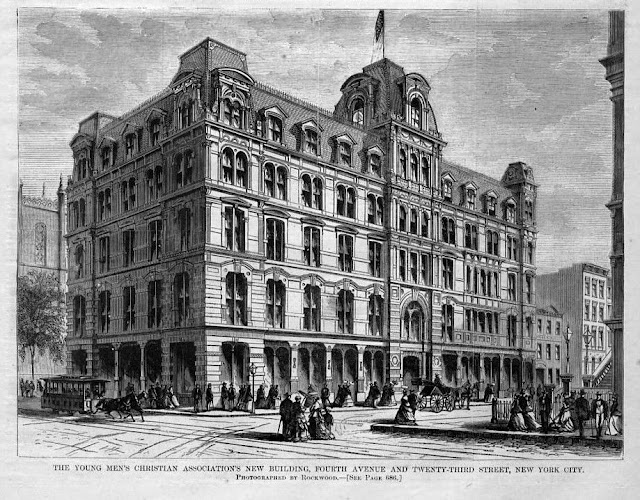 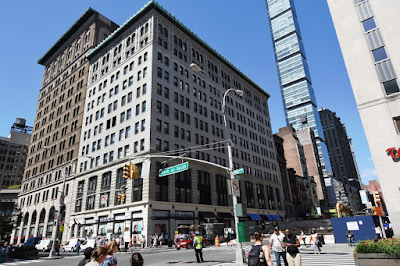 photograph by the author
Posted by Tom Miller at 1:08 AM