A Contemporary Speakeasy in the Village - 22 Seventh Avenue South 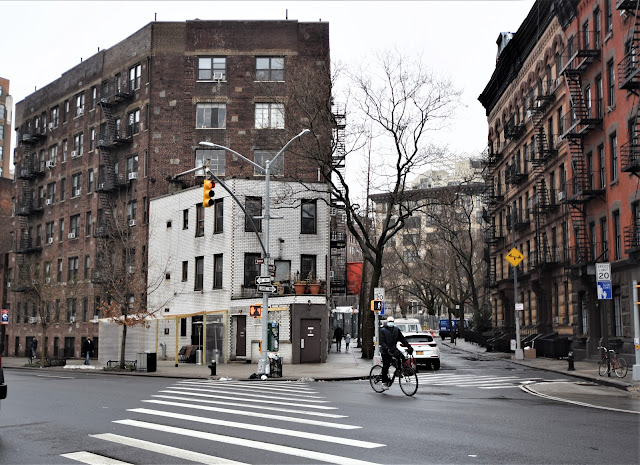 In 1889 William J. Rauch paid $26,500, or about $760,000 in today's money, for the five-story brick apartment house at No. 58 Leroy Street.  There was a store on the ground floor for additional income.  At the time the building sat in the middle of the long block between Bedford and Hudson Streets (Leroy Street changed names at the bend, just west of Rauch's building, to St. Luke's Place.)

But major change would arrive in the neighborhood prior to World War I.  Around 1904 real estate agent Charles C. Hickok began lobbying to have Seventh Avenue, which began at 11th Street, extended south to Varick Street.  Years of pressure paid off an in 1913 the extension began in concert with the construction of the Seventh Avenue subway.  Scores of buildings, including the historic 1840 Bedford Street Methodist Church, were demolished.
When the project was completed in 1917 a series of triangular plots were left at the intersections of the new avenue and the old, diagonally-running Greenwich Village streets.  A solution was found with the rapidly growing trend to replace horses with automobiles.  A number of gasoline stations were erected on the otherwise nearly unusable sites.
On what was left of the site of Rauch's brick apartment building a tiny gasoline station was erected.  Below the modest building was a large masonry vault to accommodate the gas tanks. 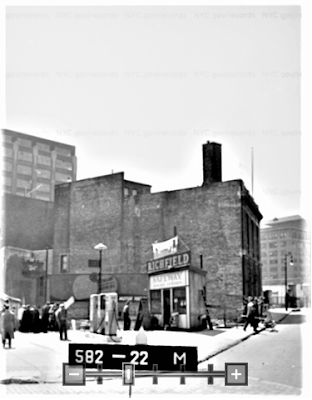 The construction project focused more on the heavy vaults below ground than the shanty-like gas station itself. via the NYC Dept of Records & Information Services
In 1964 the service station was removed to be replaced by a nondescript white brick building three stories tall.  There was one apartment each on the second and third floors.  The plans called for an "eating and drinking establishment" in the cellar and first floor. The architects did not aspire to greatness in the design and saved their client's money by foregoing custom bricks to create clean corners for the angled footprint.  The result was a zipper-like appearance.  The problem of the sharp corner was resolved by a one-story extension that provides outdoor space to the second floor apartment.  Numbered 22 Seventh Avenue South, it also provided entrance to the downstairs club.
It is unclear how much of the old masonry vault was preserved and what was rebuilt; but the subterranean atmosphere was perfect for an intimate, arcane club.
In 1974 Roswell Rudd opened a "jazz room," with the unexpected name of the St. James Infirmary.  The New York Times columnist John S. Wilson described it on December 4 that year as a "small, low-ceiling, informal basement room" and a "permanent, nightly home for the fascinating mixture of growls, shouts, mutterings and explosions that make up [Rudd's] highly expressive style."
Despite its favorable reviews, the club was gone within a year.  On November 26, 1975 Michael Gross, writing in The New York Times, mentioned the Milk Bar, "the town's most-whispered-about new watering hole."  In his 2016 book New York Rock, Steven Blush recalled that in the 1980's Milk Bar "hosted great late-night depravity."
It survived until 1993, replaced by Le Vingt-Deux, the club that would give the below-ground space its mystery.   In its June 28, 1993 issue, New York magazine wrote, "A beefy bouncer, eyebrows arched, peers through a porthole and selects the clientele.  The worthy proceed down dimly lighted stairs, then onto the main floor.  A brass bar dominates it, and the whole place shimmers with candlelight."  The speak-easy atmosphere was embraced by patrons.  There was no sign on the door, only brass street numbers. 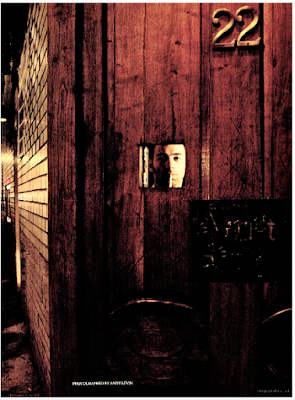 The bouncer sized up prospective patrons through the peephole.  photo by Andy Levin, New York magazine June 28, 1993
Like St. James Infirmary, Le Vigne-Deux would be short-lived.  It was replaced within the year by the Tribal Lounge, which was replaced as quickly by the Nowbar, opened by former child actor Mason Reese.  His doorman named Keith told New York magazine in September 1995, "It's like, you gotta be ready to drink, ready to take stuff off, and able to look good doing it."  The magazine described the space as "a subterranean heaven for budding playboys and super-vixens."
Reese, who lived nearby, got into a bit of trouble in 1996.  On April 10 The New York Times journalist Alex Witchel explained, "Inviting Joey Buttafuoco to Nowbar has resulted in Mr. Reese's being summoned to appear before the State Liquor Authority because Mr. Buttafuoco, an ex-convict, was photographed mixing drinks.  (Ex-convicts are not legally allowed to serve liquor.)"  It was merely a publicity stunt and Buttafuoco never served any drinks, but that would have to be straightened out with authorities.
Sasha Petreaske opened Little Branch in the space in 2005.  He continued the Prohibition Era style allure of the below ground space.  Seth Kugel of The New York Times called it on April 13, 2008 "a faux speakeasy that in this case is identified with nothing more than a subtle plaque affixed to the door." 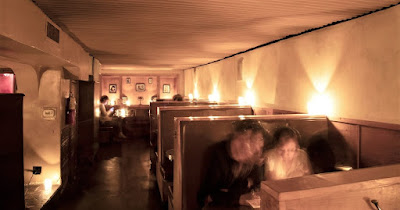 Once partially filled with gas tanks, the space is a below ground refuge today.  photo by Erinn Springer, New York magazine
New York magazine more recently wrote, "The bartenders wear suspenders and many of the old speakeasy rules still apply (no talking loudly or misbehaving) at this kind gentle permutation of a speakeasy from the late hallowed drinkslinger Sasha Petraske." 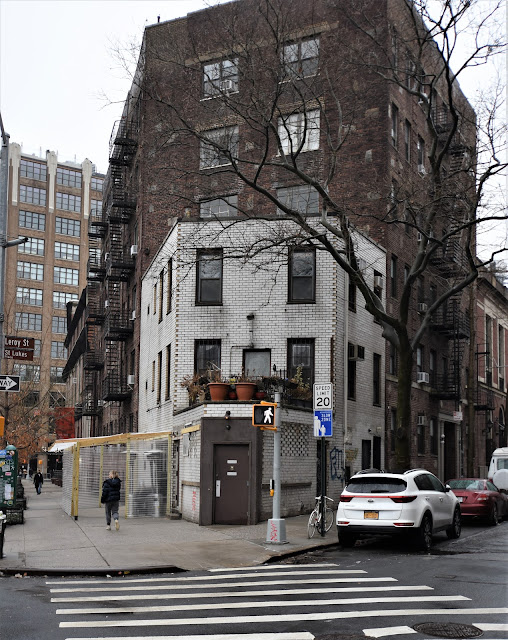 Little Branch preserves the Prohibition Era speakeasy tradition created by Le Vingt-Deux.  There is no signage, a doorman still evaluates the potential patrons, a heavy curtain obscures the staircase leading downward, and the garter-sleeved bartenders are straight from the 1920's.
photographs by the author
many thanks to reader Lynn Ireland for suggesting this post
Posted by Tom Miller at 1:10 AM