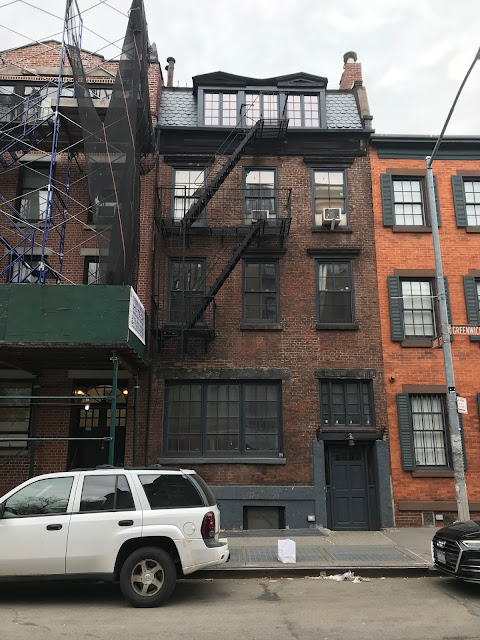 As Greenwich Village experienced a population explosion in 1828, Linus and Hiram Little purchased two building plots from Jacob B. Taylor on Greenwich Avenue--formerly an old Native American trail.  Because Linus was a mason it is almost assuredly he who erected the two matching Federal style houses at Nos. 102 and 104, completed in 1829.

The identical 20-foot wide residences were faced in Flemish bond brick and rose two-and-a-half stories.  A short stoop of five steps led to the entrances, and one or two dormers would have pierced the peaked roofs.  The Littles went to the added expense of having handsome paneled lintels carved for the openings. 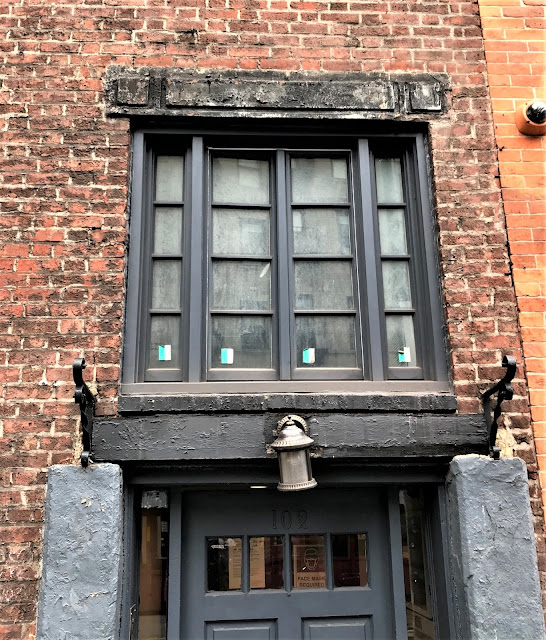 A paneled lintel was relatively recently exposed when the 1880's cast metal update was removed.

If the men ever intended to live in the residences, it does not appear they ever did so.  Hiram was living in West Bloomfield, New Jersey in 1837 when "George W. Bennett made free" with his silver watch valued at about $1,000 today.  Bennett had made an unfortunate choice in the faulty timepiece.  The New York Daily Herald said, "The complainant said it did not go well, in which opinion the magistrate fully concurred."  Bennett was sent to Bridewell Prison.
No. 120 was being shared by two families by 1847.  No doubt Daniel H. Hallock and Daniel B. Tompkins knew one another professional, as both were carmen.  The term referred to the drivers of horse-drawn delivery drays, similar to today's UPS or Fed-Ex drivers.
The arrangement continued through 1856--always just two families in the house and rarely any tenant not employed as a carman or coachman.  In 1857, the tenant list--now noticeably Irish--increased with two laborers, James Flynn and Hugh McGlone, sharing the main house with Henry F. W. Warner, another carman.  Living in the smaller house in the rear yard that year were two widows, Mary Beggs and Catharine Riley, and a machinist James McQuille.
At some point before 1887 the attic level was raised to a full floor and a fourth floor in the form of a mansard with two dormers was added.  Molded cast iron lintels were installed over the brownstone originals and an up-to-date Italianate cornice installed.
The occupants at the time were not all upstanding citizens.  Among them in 1889 was Paul V. Grolph who deemed himself a "journalist, inventor, clerk and operator on a small scale."  And indeed, he had dabbled in all those professions, but in a most shady way.
On November 13, 1889 The Evening World reported, "Grolph first came into public notoriety in the Custom House, where, under a pretense of being a confidential clerk, he collected or attempted to obtain money from importers on a promise to lessen their customs duties."  He was fired for extorting bribes.
He then took a clerical position in the National Democratic headquarters during the election, "but was dismissed after a few weeks for good cause."  He tried his hand at reporting for a city newspaper, and then fashioned himself as an "alleged expert electrician."
In October 1889 his wife had him arrested for abandonment.  The Evening World reported that he "was placed under bonds by Justice Gorman to pay to the discarded Mrs. Grolph $7 a week."  Within the month, on November 11, the police were back at No. 102 Greenwich Avenue.  Grolph was arrested for stealing a gold watch from Henry V. Kinsbury and selling it "to a club of men and appropriating the proceeds."
At the police station Grolph pleaded that he was too ill to go to prison.  "Surgeon Van Kuren, of the police force, believed that the prisoner was shamming, but fearful of making a mistake he gave him the benefit of the doubt and had him sent to a hospital," said The Evening World.
Edward H. Beckert rented a room in the house in 1892.   He left home in December to see his sweetheart in Poughkeepsie, Jennie Edwards.  He took along a $150 bicycle which he sold there.  The problem was the bike, worth more than $4,300 today, was not his.  He promptly disappeared.
Beckert's father, who was an attaché in the Custom House, feared his son had suffered an accident and notified the police.  He was found and arrested for the theft.  The New York Herald mentioned, "He was with a woman at the time."
Two years later he was in trouble again.  In the summer of 1894 he presented a fake letter from the Young Men's Christian Association to the clothing firm of  Smith, Gray & Co. of Brooklyn.  It explained that Beckert was about to "depart for foreign fields to engage in missionary work," and sought donated clothing.  Beckert walked away with more than $4,000 worth of clothes by today's valuation.  Once again, he was discovered and arrested.
Beckert's father blamed female influence on his son's troubles.  The New York Herald said "The young man's father said that his son had always been dutiful until he met a woman, who lives in Franklin avenue, almost six months ago."
One roomer at the time seems to have sought questionable work.  The immigrant named Wernicke placed an advertisement in The New York Times on October 3, 1894 that read:

Valet--By a German; a good nurse, understands massage, rubbing off, frotteur; useful in many ways; in gentleman's apartment, or take care of invalid gentleman; best references.

Another German, Louis Weigand, had a steady job as a stage hand at the Fourteenth Street Theatre.  In the spring of 1895 the play Captain Paul was playing.  It was a biographical story of Captain Paul Jones.  A particularly thrilling scene took place in the third act.  "The battle action is supposed to take place on the deck of the Ranger, the flagship of Paul Jones," explained The New York Times on May 8.  "The shells which burst upon its deck are supposed to have come from its rival, the Bret."
The shells which exploded on the stage were real--dropped from the roof 90 feet above.  They were strung on a line, invisible to the audience, and exploded when they struck a lead plate.  The New York Times explained, "It was Weigand's duty when the shells were dropped...to release the remnants, clearing the way for those which followed."
During the performance on May 6 one of the shells exploded prematurely.  "Weigand attempted to clear the drop line, but before he accomplished his task a second shell dropped down the line and exploded in his face."  The 28-year-old was taken to the Eye and Ear Hospital on 13th Street.  Two days later The New York Times reported, "He is now at his home, 102 Greenwich Avenue.  The doctors say he will never recover his eyesight."
During the first years of the 20th century the house was described as a "tenement" in real estate documents.  When it was sold to Mrs. J. Alverez in April 1920, the New-York Tribune noted that she "will alter the property into studio apartments."
The renovations resulted in the stoop being removed and the doorway lowered to sidewalk level.  A large window replaced the former pair of parlor windows, and the fourth floor dormers were joined into a large, studio window.
An advertisement in June 1921 offered: 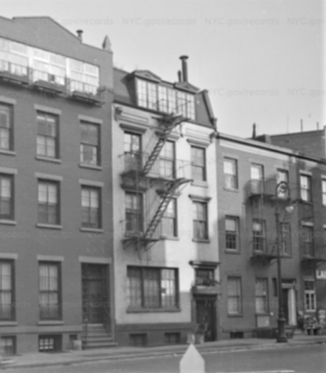 When this photo was taken around 1941, the cast iron lintel above the former entrance was still intact.  Only the Italianate brackets of the cornice survived at this point.   via the NYC Dept of Records & Information Services
Only eight years later another renovation was performed.  It resulted in "non-housekeeping" apartments throughout the house--meaning that there were no kitchens.  That changed in 1964 when the house was again reconfigured for three apartments per floor.
The building was the scene of a terrifying incident on January 10, 1971.  One of the tenants called the Fire Department to report the smell of gas.  The New York Times reported, "A fire captain, a lieutenant and five firemen entered the basement of the four-story brick apartment house at 102 Greenwich Avenue...shortly after 10:30 P.M."  Shortly afterward "an explosion rocked the basement."
Seven fireman and one resident, Lawrence Sims, were injured in the blast and taken to St. Vincent's Hospital.  It took firefighters an hour to bring the subsequent fire, which was confined to the basement, under control. 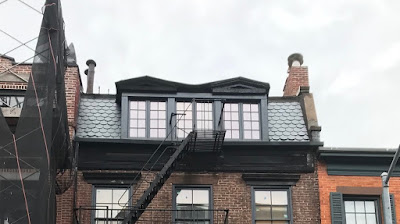 The dormer and the mansard (seen above in 2019) have been recently restored.
At some point the cast iron lintel above the entrance fell away, exposing the paneled lintel placed there by Linus Little in 1828.  Only the fascia of the Italianate cornice survives.
Recently the fish scale shingles of the mansard, for years replaced by a tarpaper type material, were restored, offering hope that the owners intend to rejuvenate the nearly 200-year old beleaguered house.
photographs by the author
Posted by Tom Miller at 1:10 AM