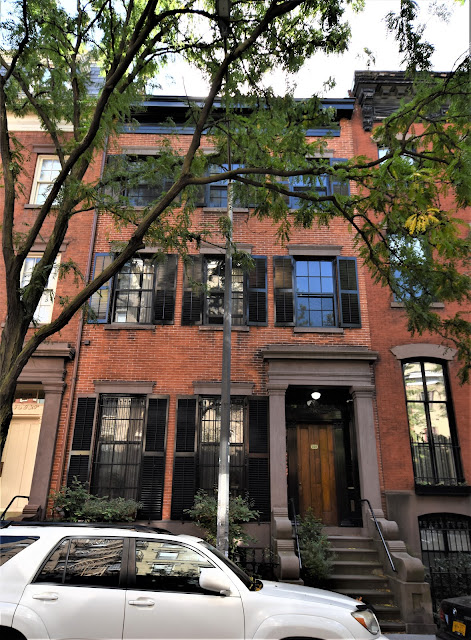 Richard McCarty was a well-respected member of the community in 1838 when construction was completed on his fine brick-faced home at No. 24 Hammond Street.  He held the highly responsible position of Inspector of Flour for New York City and Kings County.  Highly involved in politics, in 1838 he was chairman of the Nominating Committee of the Democratic Republican General Meeting.
His new house was designed in the Greek Revival style.  The entrance was framed by the heavy pilasters and entablature expected in the popular style.  Unusual, however, was the treatment of the stoop.  Rather that using cast iron railings, the architect created stone wing walls that tumbled down in a series of volutes to create a sort of breaking wave effect.
As was common, a smaller house for income purposes sat in the rear yard.

Around 1853 the house became home to Ransom Parker who had founded the Washington Ice Company in 1851.  Born in Brookfield, New York in 1816, he came to New York City in 1833.  He was involved in the spring water business before turning to ice.
Parker dabbled in real estate as well, as evidenced in his advertisement in the New York Herald on November 18, 1856:

To Let--A part of a rear house, very pleasantly situated, 24 Hammond street, near Waverley place.  Also, the third floor of 189 West Fifteenth street, near Eighth avenue, for shop purposes.  For further particulars inquire of R. Parker, on the premises.

Parker's first wife, Mary Dix, had died in 1849.  The couple had had six children, Maria Louisa, Ransom, Jr., Mary Elizabeth, Joseph Edward, Sarah Jane and Priscilla.  When they moved into the Hammond Street house Maria Louisa was in her teens and Priscilla was around 7-years old.  By then Parker had married the former Jane Elizabeth Pennington.
The tenants in the rear house were working class.  In 1857 they included Henry E. Beers, a driver; Benjamin F. Cloud who worked as a painter and volunteered at the Howard Engine Company No. 34 on Christopher Street; and Dewitt C. Clark who listed his profession as inspector.
The drawing room of the Parker house was the scene of Mary Elizabeth's wedding on June 4, 1862.  The 20-year-old was married to Walter A. Place, who was 21.
By 1863 Ransom, Jr. had joined his father's business.  The following year Hammond Street was renamed and the house received the new address of No. 228 West 11th Street.
In 1867 Sarah Bramson, a widow, listed her address here.  It is unclear whether she rented part of the rear house, or was a boarder with the family.  Three years later her son, Gustave, joined her.  He was in the insurance business at No. 325 Broadway.  They would remain through 1873.
As the population of No. 228 West 11th Street diminished through marriages, it is clear that Ransom and Jane did take in at least one boarder in the main house.  On April 13, 1872 an advertisement appeared in the New York Herald that read: 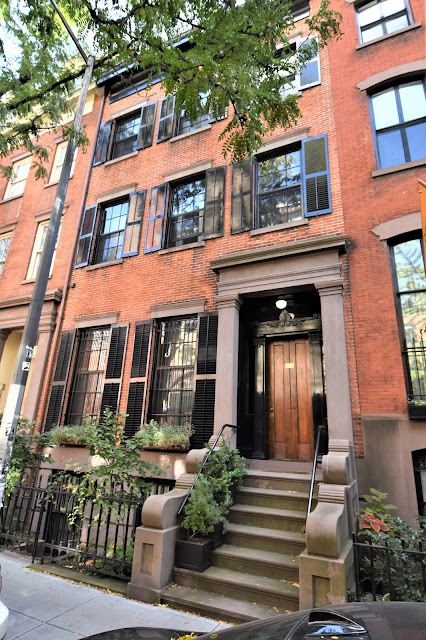 A renovation to No. 228 West 11th Street completed in 1985 resulted in a two-family dwelling, a basement apartment and a triplex.  Outwardly the nearly 185-year old residence is remarkably unchanged since Richard McCarty and his family moved in in 1838.
photographs by the author
Posted by Tom Miller at 1:14 AM