The Marble Twins at 36 and 38 Walker Street 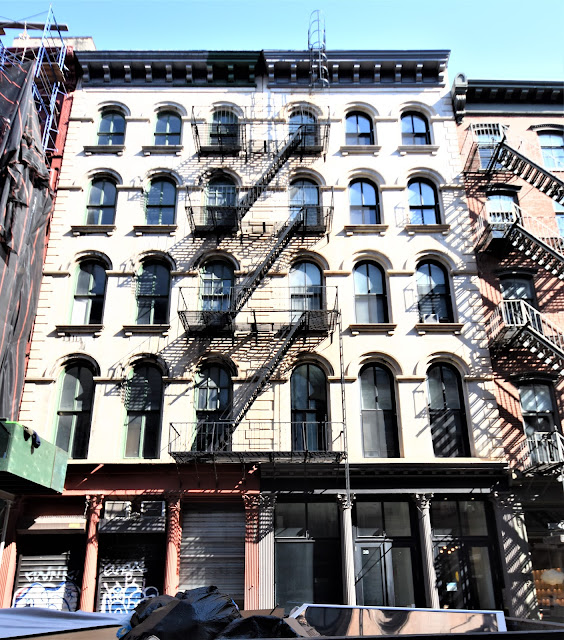 On January 30, 1856 an auction was held of the furnishings of the two-story house at No. 36 Walker Street.  The listing hinted at the formerly elegance of the residence.  It included "carved mahogany sofas and parlors chairs, covered in crimson and black," a mahogany marble top center table, bronze and ormolu clocks and other high-end items.  The neighborhood was undergoing significant change, with commercial structures just beginning to appear.

Within a year Thomas Lewis began construction on a five-story store and loft building next door at No. 58 Walker Street.  Completed in 1858 it was designed in the Italianate style and clad in white marble above the cast iron storefront.  The arched openings wore molded lintels and sat on prominent bracketed sills.  They were separated by piers with shallow Doric capitals.
Lewis was apparently pleased with his new building, because almost immediately upon its completion he began work on an identical structure at No. 36, finished in 1860. 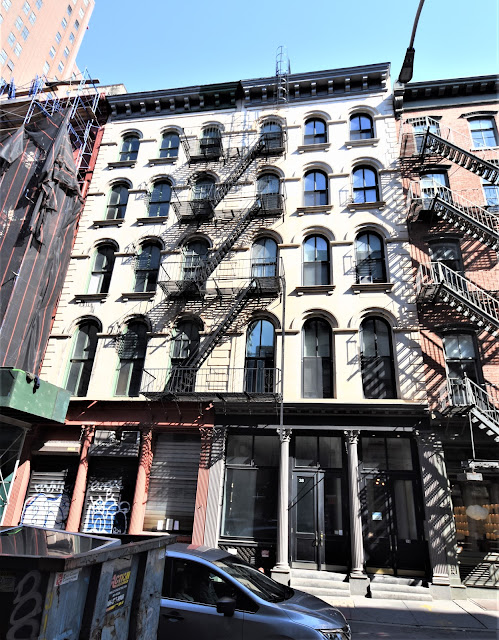 Although built two years apart, the buildings are essentially identical.
Among the initial tenants of No. 38 was merchant tailor Henry Trowbridge & Co. on the top floor.  His business catered to affluent clientele and afforded him a sumptuous home at No. 21 Gramercy Park.
In November 1859 burglars used the unfinished No. 36 to gain access to the roof, then break into the scuttle, or hatchway, to enter Trowbridge's shop.  The New York Daily Herald reported on November 23, "After collecting about $700 worth of sewing silk, and about $800 worth of silks and velvets, the rascals decamped in safety with their booty."  The theft would amount to about $47,600 in today's month.
Within a few days three suspects were arrested.  One of them, Thomas Nolan, was carrying a pistol, which Henry Trowbridge identified as having been stolen from his store.  "No trace of the stolen silks could be discovered," said the New York Daily Herald, "but the police feel sanguine of being able to recover them at an early day."
Detectives got a break when Helen M. Gascaeque, "a woman of a literary turn of mind," according to the Brooklyn Times Union, came forward with evidence.  She said she was visiting a house on Franklin Street where she saw the stolen goods.  Samuel N. Levy, "a mock auctioneer," as described by police, "subsequently appeared and bargained for them in her presence."  After signing an affidavit, Helen discovered the dangers of playing police informant.  On December 14, 1859 the Times Union reported "an attempt has been made to intimidate her from telling the trust, and she has been placed in the house of a Detective in order that she may not be further tampered with."
The ground floor of No. 36 was first home to the John C. Fox & Co. piano showroom.  An advertisement on September 19, 1859 touted their "Very Superior Piano Fortes," saying "These instruments are...unsurpassed for strength in their manufacture.  Purity, Sweetness and Power of tone throughout the entire interior, delicacy of touch and also for their superior singing quality of sound by those of any other makers."
Within six months Steinway & Son's piano firm had taken over not only the store space at No. 56, but No. 58 as well.  Its advertisement in March 1860 offered "Overstrung Grands and Square Pianos."  But like John C. Fox & Co., it would remain only about a year.
In the meantime the upper floors were home to seemingly odd bed fellows with dry goods and apparel firms coexisting with publishing and bookselling houses.  In 1862 Oliver S. Felt announced "that he has taken rooms" at No. 36, "where he will carry on a General Book Business."  On January 12, 1863 he advertised:

Don't be a fool!  Pay no more money to Advertising Quacks, but go to a respectable place and buy a standard work.  Trail & Jackson's Pathology Of The Reproductive Organs, which contains Full Directions for the Lasting Cure of Every kind of sexual disease or weakness.  $3

The book was not inexpensive, costing around $65 in today's money.
At the same time Leonard Scott & Co. operated from No. 58.  Unlike Felt, the firm dealt mostly with periodicals.  It published Blackwoods' Magazine here, and imported British periodicals like the London Quarterly and the Edinburgh, Westminster and North British Reviews.  For $10 a year, a well-informed reader could subscribe to all five, a deal which Leonard Scott & Co. touted saying, "truly, the force of cheapness can no further go."

The New York Times, March 31, 1863 (copyright expired)
The type of articles provided in the periodicals was evidenced in an article in the Delaware State Journal and Statesman on January 5, 1866.  It described a piece in The London Quarterly Review saying:

The article on "Blind People" shows their condition, and how they are taught to read and write.  The statistics given are rather alarming, but the great prevalence of blindness should make all feel a deep interest in the subject of rendering the affliction less burdensome to those who have to bear and suffer it.

Other tenants in the buildings in the 1860's were bonnet maker Warren C. Gray; drygoods merchant John M. Perry; Stephen R. Lounsbery, who dealt in "cloths;" the Spring Valley Mfg. Co., dealers in "fancy colored mosquito netting of fine quality," and drygoods merchants John Ryle & Co.
In the years before freight elevators were common, heavy crates were hoisted up and down by a pulley system through an open shaft known as a hatchway.  On January 11, 1866 workers employed by John Ryle & Co. lowered a case of silk valued at more than $58,000 in today's terms to the ground floor to be loaded for delivery.  But thieves were faster than the employees.  The New York Times reported it "was carried off from beneath the hatchway of premises No. 36 Walker-street...by some persons unknown, who made a successful escape with their booty."
But as had been the case with the Henry Trowbridge & Co. theft, detectives quickly tracked down the culprits, Caspar Parris and Abraham Greenthall ("more familiarly known to the police as 'General' Greenthall,'" noted The New York Times).  Parris was arrested without incident, but Greenthall was less cooperative.
"He at first resisted the efforts of the officers to make him their prisoner," said The New York Times, "assisted by his wife and daughter.  After a sharp struggle, Greenthall changed his tune, and endeavored to tempt the officers into releasing him, offering to give them the sum of $300 and a gold watch and chain.  He proved unsuccessful, however, and both prisoners were conveyed to the Fifth Precinct Station-house."  (There Greenthall tried one more time to escape, offering Captain Petty a $400 bribe, "but was again unsuccessful.")
Frank & Keister operated from No. 38 in the late 1860's.  Two women who entered the store on July 22, 1869 aroused the suspicion of partner Eliezer W. Frank, who carefully watched them.  The New York Herald reported he "detected them in endeavoring to conceal and carry away from the store a quantity of pocket handkerchiefs valued at $8.25."  Sarah Thompson and Annie Jones were arrested for shoplifting.  The value of the goods would equal $160 today.
Drygoods and apparel companies continued to lease space in the buildings through the rest of the century.  In the 1890's Atlantic Shirt Company, the clothing firm of W. C. Loftus & Co., manufacturers Amdur & Goldstein, and Newmark & Shapiro, pants makers, were among the tenants of No. 38; while next door were firms like Zweig & Kaemmerer (which had been in the building at least since 1873), and shirt manufacturer Bernstein & Reiss.
W. C. Loftus & Co. was a major concern, started in 1866.  In 1896 Loftus's brother, Thomas formed a corporation under the same name to operate retail clothing shops and within two years there were more than a dozen stores.  Thomas Loftus's ambition surpassed his business sense.  Toward the end of 1897 he "'fixed up' the books in anticipation of failure, bought new ones and wrote them up, pretended to take an inventory," and used the false figures to negotiate with his creditors.  The firm was bankrupt in February 1898 and Thomas J. Loftus was in serious legal trouble.
The post World War I years saw a change in the tenant list.  In 1921 Frank Socias, maker of tents, was in No. 38, for instance, and Albert Bloch & Sons, dealers in "auto sponges and chamois" operated next door by 1926.  The ground floor, where Steinway & Sons had once displayed its rosewood pianos, was a luncheonette during the Depression years. 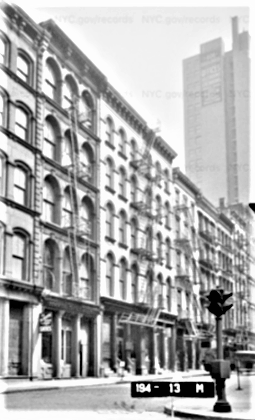 Little has changed to the appearance of the two buildings since this photo around 1941.  via the NYC Dept. of Records & Information Services
The mishmash of small businesses that occupied the buildings at mid century included Trulove, perfume makers.  An advertisement in the Pittsburgh Pennsylvania Courier in 1952 read:

Next door the Everstay Pres-It Co. marketed its "Pres-It" patches.  Its advertisement in the Daily News on May 8, 1959 urged, "Don't Mend it -- "Pres-It."  The firm manufactured an early form of the iron-on patches that would be popular for decades. 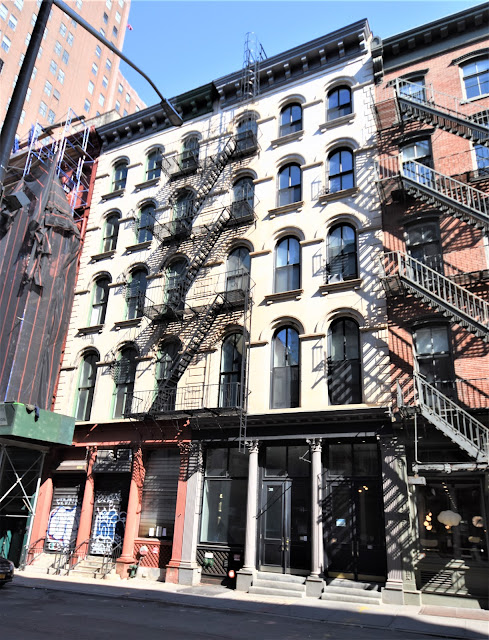 The dignified carbon copy structures, so far, have not been renovated to residential use like so many Tribeca lofts.  Their marble facades, early examples of commercial structures in the neighborhood, are remarkably intact.
photographs by the author
Posted by Tom Miller at 1:30 AM