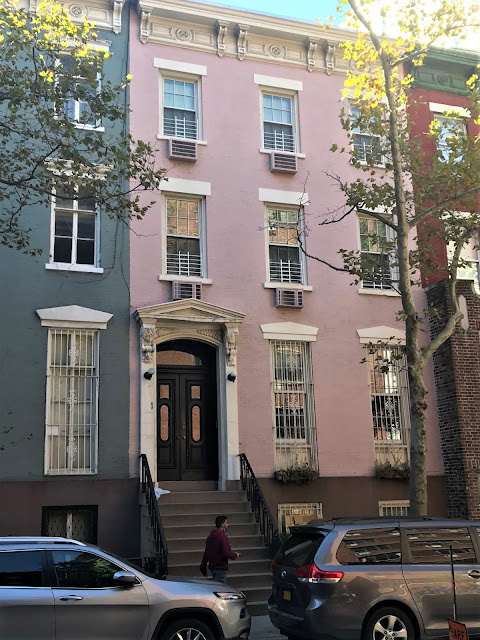 In 1856 the family of Harrison P. Liscomb moved into No. 130 West 15th Street, one of a long row of recently erected Italianate brick homes between Seventh and Eighth Avenues.  Liscomb purchased it from Margaret Christy, the widow of George Christy.
The Italianate style of the Liscombs' new house was the latest in domestic architectural fashion.  At three stories tall above an English basement and 25-feet wide, it spoke of the family's affluence.  The enframement of the elliptical arched double-doored entrance featured foliate brackets that upheld a triangular pediment--echoed in the pediments over the parlor windows.  Those were, in fact, French doors which opened onto a cast iron balcony.  The pretty cornice with brackets and rosette was identical to those of its neighbors.
Liscomb was the head of the coffee importing firm H. P. Liscomb & Co. at 64 Barclay Street.  He and his wife, Elizabeth M., had three children, Frances Jerusha, Emma Edgerly, and Charles G.  Their country home was in Belleville, New Jersey.
The house was the scene of Frances's wedding to Joseph Rudd, Jr. on September 19, 1865.  Joseph was a merchant, doing business at No. 147 Maiden Lane.  The newlyweds took up the lives together in the 15th Street house with France's parents and siblings.  The house became more populous when Charles's bride moved in.  Emma broke tradition when she married James H. Fullerton and moved out (possibly because her parents would not have Fullerton in their house--he was known to have "loose habits").
The renumbering of West 15th Street in 1868 gave the Liscomb house the new address of No. 210.  The following year, on February 20, 1869, Harrison P. Liscomb was in New Orleans where he died at the age of 55.  His body was brought back to New York and his funeral held in the parlor of No. 210 on March 14.
He bequeathed the house to Elizabeth, Charles, and Frances and her husband.  Interestingly, no mention of Emma nor James Fullerton was made; quit possibly because of Fullerton's already questionable reputation.  On May 8 Charles transferred his portion of the title to his mother.  The Rudds did the same, but were less generous, selling their one-third portion to Elizabeth for $5,318.66--just over $103,000 in today's money.
In 1870 Elizabeth took in a boarder, John A. Hillery, who was in the insurance business on Wall Street.  Money seems to have been getting tight by 1873, prompting Elizabeth listed the Belleville property for sale.  Then, on March 30, 1881, she sold No. 210 to Frances and Joseph Rudd for $7,000, not much more than they had sold their one-third interest to her 12 years earlier.
Somewhat surprisingly, Emma and James H. Fullerton, who had not been listed at the address in decades, reappeared shortly afterwards.  James had been working as a "transfer clerk" for the Manhattan Beach Railway Company since 1880.  In that position he was responsible for transferring stock certificates to investors as well as handling the payroll of lesser employees like watchmen.
The reason that Harrison Liscomb had ignored his daughter and Fullerton in his will might have been explained by Fullerton's gambling addiction.  The Sun, which described him on March 13, 1884 as "of slight build, and quiet and courteous manners," said:

He was well known in certain resorts uptown, and so far as can be learned, spent the greater number of his evenings at card tables.  An acquaintance of his, in speaking of him last evening, said that he first met him about six years ago, when he was accustomed to play in a well-known sporting resort at a game of poker for $300 and $500 table takes.  He used to frequent a well-known gambling house on the west side of town, where he bucked the tiger as if possessed of unlimited resources.

Fullerton earned $1,200 per year with the railroad company--about $32,300 today.  But his gambling far exceeded his income.  One acquaintance said "Why, he apparently had more than that in his clothes every night."
It became evident where his gambling money was coming from on March 7, 1884.  An attorney for the Manhattan Beach Railway Company found discrepancies in the books that afternoon and brought it to Fullerton's attention.  Fullerton said that the account had not been completed and, according to the lawyer, "I told him he had no business to leave it that way, and to write the account up at once.  He said he would do so.  As soon as my back was turned he put on his hat and left the office, and we have not seen him since."
Fullerton went straight to the American Exchange National Bank and withdrew the $920 payroll (almost $25,000 today).  When he did not return to the office a more thorough examination of the ledgers was made.  Officials estimated he had obtained about $45,000 by forging and cashing out stock certificates--more than $1.2 million in today's money.
Fullerton never went home, either.  The Sun reported on March 13, "He lived at 210 West Fifteenth street.  Nothing was known of him at that number last night except that he had not been seen since Friday.  He leaves a wife and child."
Five years later the family's name appeared in the newspapers for a much less grave situation.  Charles's son Harry became a hero of sorts in December 1889 when he helped capture the male ringtail monkey that had caused havoc in the neighborhood for months.  It had all started that September when a servant girl in one of the houses on the block was "awakened one morning by two hands patting her cheeks," as reported by The World.  "She looked up, and by the morning light saw bending over her a strange and hideous face."
The girl jumped from her bed yelling "Murder!" and flew down the stairs.  The family checked her room and, finding nothing, assumed she had had a nightmare.  A few days later an upholsterer returned to his shop to find some of his tools gone, and then a boarding house landlady awoke to find her cupboard ransacked and several jars of preserves stolen.
Finally a woman walked into her rear yard to find the monkey perched on her board fence, eating from one of the stolen jars.  The monkey's vandalism and thefts from kitchens and bedrooms continued, but no one was able to catch it.
Harry Liscomb told reporters of the months-long episode.  "It was fun to see him crawling along the division fence with something that he had stolen in each of his front paws.  At times he would disappear for several days.  Where he would go no one knew; then back he would come hungrier than ever.  He soon learned to open doors of cupboards, and nothing was safe from him...Wash-day was his delight.  He would climb along the clothes-lines, pull the pins out and then sit on the fence and watch the clothes blow off the line."
But as the temperatures fell, the monkey spent more and more time indoors whenever he could find access.  Finally, one morning just before Christmas a servant of William Whiteman at No. 220 West 15th Street built a fire in the kitchen then went upstairs.  When she returned the monkey was sitting on the range, shivering.  Harry Liscomb and the Whiteman's son captured him.  Thinking back on the damages and thefts, Harry told a reporter, "If any one should appear and claim the monkey there will be some reckonings to be made before the monkey is taken away."
Joseph Rudd died in 1895 and Charles G. Liscomb died on April 8, 1903.  Frances moved to Utica around the same time.  She retained possession of the house, leasing it to a boardinghouse proprietor.  Among the boarders in 1906 was Arthur Johnson, who was a con man of sorts.
On November 7 that year silk merchant Julius Shapera temporarily left his wagon loaded with goods in front of his home on West 34th Street.  When he returned, a $300 bundle of silks was missing.  Just as he was about to drive off, Johnson appeared, identified himself as a private detective, and said he would recover the goods for a $100 fee.  Shapera agreed and later Johnson returned with $75 of the stolen goods.  Shapera gave him a check for $34 but later, suspecting foul play, cancelled payment.  When Johnson came to his home on January 21, 1907 to get a cash settlement, a detective was waiting to arrest him.
On November 18, 1921 Frances Rudd transferred title to No. 210 to Daisy B. Rudd.  Like Frances, Daisy lived upstate and continued to lease the house.  (Frances died two years later at the age of 78.) 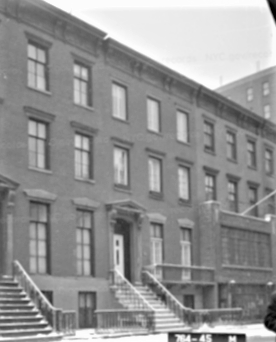 In 1941 the cast iron balcony and the upper floor lintels survived.  via the NYC Dept of Records & Information Services.
By the Depression years the house had declined to a rooming house, operated by Anna Benhart.  It was the scene of tragedy early on the morning of June 30, 1939.  Madeline Kelly fell asleep with a lit cigarette in her hand.  Sometime later Mrs. Benhart was awakened by the barking of her dog.  Smelling smoke, she "yelled to give the alarm," according to The Daily Worker.
Three of the roomers rushed to the roof before the fire fighters arrived.  In the chaos and panic, one occupant collapsed from shock in the hallway.  The fire fighters extinguished the blaze, which was confined to Madeline's room, and raised a ladder to rescue the roomers on the roof.  A doctor from St. Vincent's Hospital treated Anna Benhart for shock.  Sadly, the 36-year old Madeline Kelly was found dead in her bed. 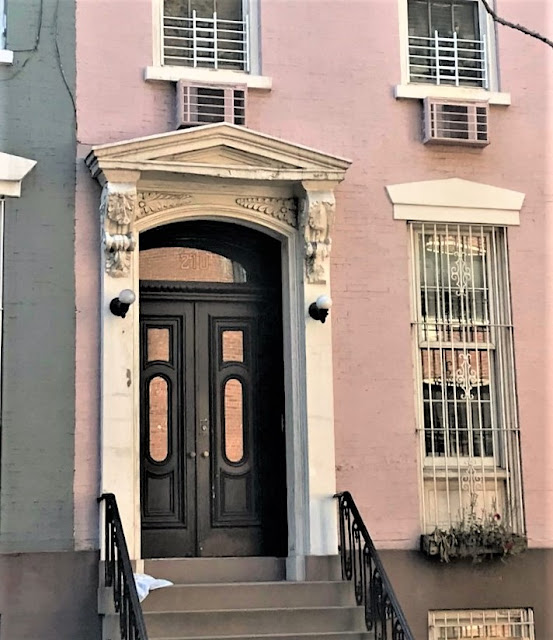 Although some of the detailing has been removed, the entrance is intact as are the cornice and Italianate ironwork.
Against all odds the Liscomb house was not converted to apartments until 1968.  The alterations resulted in a duplex in the basement and parlor floor, and one apartment each on the upper floors.  At some point after mid-century the cast iron balcony was removed and the pediments and lintels over the windows shaved flat.
photographs by the author
Posted by Tom Miller at 1:10 AM