In the late 1850's Canal Street was a major shopping thoroughfare, when grand emporiums like the marble-fronted Arnold & Constable emporium (the firm would later be renamed Arnold, Constable & Co.) catered to Manhattan's carriage trade.  But in 1871, when James Watson Webb began construction of his five-story structure at Nos. 365-367 Canal, manufacturing and retail coexisted along the street.  And Webb's building would blend both.

Webb had a colorful past and iffy reputation.  Formerly the owner of the New York Courier and Enquirer, his disdain of abolitionists resulted in his newspaper printing false stories and saying, for instance, that abolitionists pushed their daughters to marry blacks.  After turning down several Government positions (reportedly because they were not lucrative enough), he was appointed Ambassador to Brazil by Abraham Lincoln.  His term ended two years before he started the Canal Street project.

Webb commissioned architect William Waring to design the building.  While indications are that it was originally intended to house a store at street level with a "tenement" above; that had all changed by New Year's Eve, 1871, when it was officially completed.  Instead, lofts provided space for manufacturing or showrooms.

Waring's cast iron base could not have been more different from the Ohio stone-faced upper floors--the store being elaborate with French-inspired decoration; and the spartan upper floors adorned only with identical window cornices and a thin stone bandcourse between each floor.  The simple upper cornice was in contrast to the ornate storefront.

Only four months after the building opened, it appeared its ground floor tenant would go out of business.  Theo. W. Bailey & Son was a well-known purveyor of expensive floor coverings.  But Theodore Bailey was seriously sick and on April 19, 1872 the following announcement appeared in The New York Herald:

Owing to the continued ill health of Mr. Theo. W. Bailey, we shall close out, at public sale, on Friday, the 19th day of April, at 11 o'clock A.M., all the stock of Goods in stores 365 and 367 Canal street, near Wooster stret, New York, consisting of body Brussels, tapestry Brussels, three-ply, ingrain and hemp Carpets; 2,000 rolls Oilcloths, all widths cocoa Matting, Rugs, Mats, &c., with the General Stock of a carpet store.

Happily, it turned out to be a false alarm.  Bailey recovered and the business continued.  Whether or not the clearance sale occurred is unclear.

On June 2, 1875 the new Masonic Temple was dedicated with unusual fanfare.  Officials estimated that more than 17,000 masons marched in the parade and The New York Times said it constituted "what may fairly be called the largest and most imposing civic display ever seen in this City."

Work in Siegel Brothers ground to a halt as the parade passed under its windows.  "The employes of Siegel Brothers & Co., No. 367 Canal street, were particularly demonstrative while the procession passed, a large number of them appearing at the windows and waving handkerchiefs," said the article.

In the dark of the night on June 10, 1877, the store of Theo. W. Bailey & Sons was used in a daring jewel robbery right out of a movie script.  Next door at No. 363 Canal was the jewelry store of F. W. Pachtmann & Brother.  Gaining entrance to Bailey & Sons was much simpler than trying to break into the jewelry shop (possibly the owners felt burglars were unlikely to try to make off with heavy rolls of carpeting).

According to The Times the following morning, "The burglars gained an entrance to Bailey's carpet store...by unlocking the front door with false keys."  They then broke a two-foot square hole through the brick wall between the two buildings.  "The safes in the jewelry store were then forced open and their contents thoroughly overhauled, the drawers being all pulled out, emptied of their contents, and scattered over the floor."  The thieves escaped back through the carpet store.

The knowledgeable crooks left behind silver watches and silverware, taking only the costliest gems, and gold and bejeweled items.  They made off with $2,000 in diamonds, $12,000 in watches and jewelry, and $300 in cash--a total heist of about three quarters of a million in today's dollars.

Earlier that year, in February, The Carpet Trade Review had gushed on about some of the new Roxbury tapestry carpets being offered at Theo. W. Bailey & Sons, calling the line "unusually attractive."   The latest in Victorian taste, one carpet ("considered one of the handsomest patterns ever produced") consisted of "a white ground, with bouquet[s] of roses with vines running through."


The mid-1880's saw a change in tenants.  Gaskill, Bauer & Conderman moved into the upper floors in 1886.  Described by Illustrated New York: The Metropolis of To-Day in 1888 as "Dealers in Straw, Binder, and Tar Boards," the firm was headquartered in Philadelphia where Thomas E. Gaskill and T. H. Conderman lived.  The Canal Street store and office was run by J. C. Bauer, whom the publication called "a German, and a resident of this country for the last thirty years."

Taking the place of Theo. W. Bailey was B. F. Allen & Co., importers and dealers in "box medicines."  Among its best selling products were Dr. Sheffield's Elixirbalm and Creme Dentifrice (an early toothpaste) and Beechman's Pills.  The two commodities addressed very different complications.

The Elixirbalm, or Elixer Water, cost 50 cents per bottle.  Using 30 or 40 drops in a glass of water daily guaranteed clean teeth, perfumed breath, and no tooth tartar.   At a time when tooth brushing was not a common regimen, advertisements for Doctor Sheffield's Creme dentifrice included step-by-step directions.

B. F. Allen & Co.'s best seller by far was Beecham's Pills.  Advertisements promised relief within 20 minutes "For bilious and nervous disorders, such as Wind and Pain in the Stomach, Sick Headache, Giddiness, Fullness and Swelling after Meals, Dizziness and Drowsiness, Cold Chills, Flushings of Heat, Loss of Appetite, Shortness of Breath, Costiveness, Scurvy, Blotches on the Skin, Disturbed Sleep, Frightful Dreams, and all Nervous and Trembling Sensations, etc."

By the fall of 1891 Gaunt & Janvier moved in as well.  Like B. F. Allen & Co., it was the agent of foreign-made products, its major client being Pears' Soap and Sundries.  The firm's colorful advertisements made Pears' Soap familiar to housewives nationwide.  But while often charming, the images are sometimes seen today as disturbing and in some cases, blatantly racist.

B. F. Allen & Co. was still doing a brisk business in Beecham's Pills in 1910 when its ad campaign focused on the growing women's movement.  An advertisement in Teachers Magazine in March that year noted "Woman, whether she toils or follows the whims of society, whether she be engaged in earning a pittance or guiding the destinies of a household, is the most powerful factor in the world of to-day.  The hand that rocks the cradle rules the world.  The prime necessity of every woman, therefore, is Health."

Therefore, the ad went on, "No matter how the suffragette feels on political questions, if she is wise she will cast her votes for" Beecham's Pills.  It had, after all, "brought more happiness into the lives of women, than any other medicine."

Another patent medicine dealer moved into the building that year.. The Sirolin Co., based in Switzerland, made and marketed cough medicine.  In announcing the opening of its Canal Street operation it hinted a cure of tuberculosis and consumption, devastating and incurable diseases at the time.


"Sirolin not only relieves the local symptoms and protects the tissues against the invasions of the tubercle bacillus, but it promotes appetite, increases weight, and acts as a tonic," said the announcement.  "The cough is allayed, nutrition is facilitated, and consumption is prevented."

By the years following World War I manufacturing outweighed retail business in the Canal Street neighborhood.  For years Nos. 365-367 was home to the glove factory of French-born Hippolyte Texier.  The mid-century years saw Canal Street, once the favorite shopping street of Victorian women, decline.  But the Soho and Tribeca renaissance, sparked by artists who found the vast dusty lofts perfect for studios, found its way to Nos. 365-367 by 1971.

That year artist Jan Gomez-Guiroz lived here in what appears to be an illegal residence.  By 1977 the Soho Light Center, a performance space, was in the building.  The ground floor was home to the discount department store, American Liquidators, for years in the 1990s. 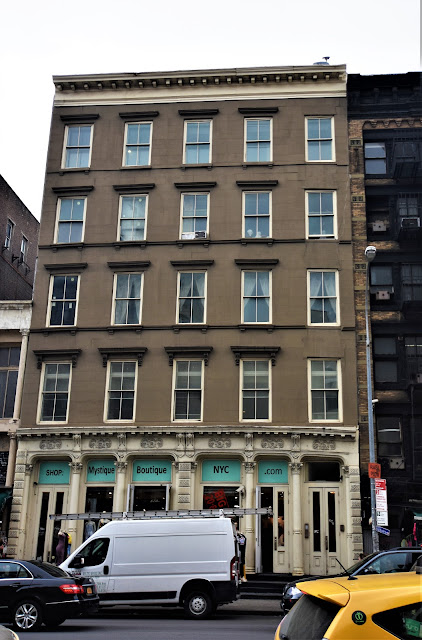 Then in 2013 a conversion resulted in artists work-living space on the upper floors--two apartments on the second and top floors, and one each on the third and fourth.  The building is little changed from its 1871 appearance and even the cast iron storefront is intact.