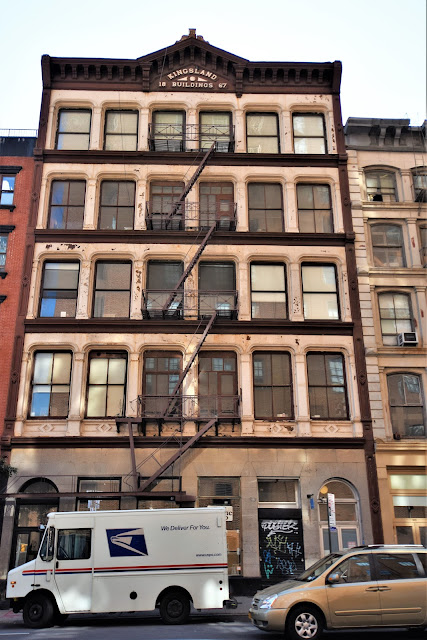 In 1866 the Civil War had ended and New York City's young men returned to the workplace.  Wealthy attorney Daniel C. Kingsland wasted no time in getting in on the building boom that immediately followed.   Before his death in 1873 he erected several commercial structures within the emerging mercantile district just south of Canal Street.

Among the earliest was Nos. 315-317 Church Street.   He commissioned Isaac F. Duckworth to design the structure; an architect who had early-on embraced cast iron construction.  Faced with an L-shaped plot--its Lispenard Street side about half the width of that on Church Street--Duckworth created two near-matching facades.  The restrained French Second Empire loft building rose five stories.  Above the storefront adorned with Corinthian pilasters, each floor was sharply delineated by its own cornice.  The shallow pilasters and the elliptical openings echoed the design of the base.  Close inspection reveals delicate rope molding framing each window.   The subtle differences of the two facades--other their widths--appeared at the top.  The triangular pediment on Church Street announced the date of construction and Kingland Buildings; while the arched pediment on Lispenard read "Erected 1867."

Factory buildings often included interior "hatchways," or shafts by which bundles could be hoisted up.  They were sometimes the cause of serious accidents, as was the case here on October 2, 1878.  The New York Times reported "Jacob Schwartz , a lad 15 years old...was found in a mangled and dying condition yesterday afternoon on the first floor of No. 38 Lispenard-street, having fallen from an upper floor through the hatchway.  He died before an ambulance could be summoned."

Like most buildings in the area, the Kingsland Building filled with garment makers.  Around 1884 McCoun & Lee, which had operated from the corner of Franklin and Elm (later Lafayette) Streets for years, moved in.  Its significant operation required 50 sewing machines and two "sets of knitting machines."   Listed in directories under the generic heading "cloak manufacturers," it more specifically added "cardigan jackets, jerseys, etc." to advertisements.

The company would coin a term that became permanently ingrained in the American lexicon.  In 1917 the American Cloak and Suit Review mentioned "We first come across the word blouse, a line of which was shown in 1888 by McCoun & Lee, 315 Church Street."  Even at the time of the article, the word was still catching on; and "shirtwaist" or "waist" was much more commonly used.


Demeanor among Victorian factory owners was not always gentlemanly.  Such was the case in 1895 when David L. Fineman, a partner in Simon & Fineman, read newspaper accounts of Gustave Meyers's testimonies before several Grand Juries regarding a rash of recent factory fires.  Meyers fingered several arsonists, including Isaac Zucher, a close friend of Fineman.

Irritated, Fineman sent a message to Meyers, suggesting that he had a job opening for him.  When Meyers showed up on June 15, Fineman and a salesman, Thomas Hall, attacked.  They savagely beat the unsuspecting man.

Meyers had Fineman arrested that afternoon.  No stranger to a courtroom, Meyers appeared the following day against David L. Fineman.  "He had several cuts in the face and on his head which he said he had received during the conflict," reported The New York Times.   And when he saw Thomas Hall sitting in the courtroom, he had him arrested as well.

Fineman, of course, had his own version of the affair.  He purported, according to the article, "Meyers had been pestering him by calling at this store.  When he came yesterday he told him to get out, and Meyers called him a foul name.  Then he kicked Meyers out of the store."  He asserted that Hall had not be involved at all, and had merely go in search of a policeman.

Charles Lewis & Brothers, dealers in woolen goods, had been in the building since its opening.  Partner George Lewis, too, had a violent confrontation that year.   On November 16 he walked around the corner to No. 49 Lispenard Street.  He stepped onto the elevator with three young men.

The The Sun reported that shortly after the elevator started upwards, the youths "began skylarking, punching each other and annoying Mr. Lewis.  When he remonstrated with them, [Joseph] Sheehan flew at the old gentleman and blackened his eye."

The feisty man fought back, but Sheehan's comrades jumped into the fray.  "A general rough-and-tumble ensued, in which the merchant was very roughly handled," said the report.  In the excitement and confusion, the elevator boy was distracted and the elevator hit the top of the shaft, throwing everyone to the floor.

Joseph Sheehan was arrested for assault and Lewis was taken to the Hudson Street Hospital where his wounds were dressed and he was sent home in a coach "suffering much shock and bruises and concussions," according to The Sun.

But, as might be expected, when the youths appeared in court on November 18, the judge heard a different story.  Sheehan, who worked in the Lispenard Street building as a shipping clerk, said he had entered the elevator with a load of packages.  An unknown boy knocked over the packages and when the two got into an argument about it, the elevator operator, Hugh Clark, inexplicably struck Sheehan.  Sheehan punched back.

According to The Sun's recount, "Lewis, who is a friend of Clark, went to the engineer's assistance and grabbed Sheehan by the throat.  Sheehan's throat still shows the marks of finger nails.  Then Owen Fitzgerald and John Meehan, who work in the same place with Sheehan, ran down stairs to Sheehan's rescue."

George Lewis had not appeared in court; but when he heard that the case had been dismissed, he was no doubt miffed and a bit embarrassed.

He and his brothers would have much more to worry about in the summer of 1898.  It all started when Charles, the senior member, died unexpectedly.  "At 4 o'clock yesterday morning he arose and complained of the heat.  He died in a few moments," explained The Sun on June 16.  The 50-year old was the was the main force in Charles Lewis & Bros. and most in the industry believed it was his money that kept the firm operating.

With seeming callousness, worried creditors pounced.  Three days after Charles's death, the first sued for an outstanding loan of $7,350.  "Friends of the firm in the trade think that there will be enough assets to pay all claims and leave a handsome surplus for the partners," said The Sun.

But other panicked creditors piled on.  On July 20 The Sun noted that so far the executions had reached $13,251 and "Two of the merchandise creditors began replevin proceedings yesterday to get their goods."  More creditors joined the rush to retrieve their money or goods, until there was no hope the firm could survive.

Its more than three decades of doing business on  Church Street ended for Charles Lewis & Bros. on July 26, 1898, just 11 days after Charles's death.   A Sheriff's sale that day liquidated the stock and netted $5,700--a mere fraction of the amount the creditors claimed.

At the turn of the century Charles Robinson's shirt waist factory was in the building.  Among his employees in 1901 was 18-year old Louis Finkelstein, who tried his hand at the stock market.  Instead of making his fortune, he lost what little money he had.  To make up for his substantial losses, he stole finished garments.

Finkelstein would bundle up quantities of blouses, then drop them down what was probably the same hatchway where Jacob Schwartz had met his doom in 1878.  At the bottom, Louis Cohen was waiting.  Cohen ran a rag-picking business which was a front for selling the stolen goods.

The scheme could only work for so long, of course, and on July 15, 1901 both men were arrested.  Finkelstein was charged as an accomplice and Cohen for "operating a 'fence' of large proportions at this home."  A Charles Robinson representative inspected the booty at the police station, and valued it at between $3,000 to $6,000--as much at $175,000 today.

Turn of the century factory work was often grueling.  Other employers in the building at the time were New York Millinery & Supply Co., whose three men and two women worked 53 hours per week; and the Novelty Skirt Co., which employed 10 men and one woman.  Their week was slightly longer at 54 hours.

Cloak makers Edelson & Shipiro occupied space by 1904.  The following year 50 of its employees, members of the United Garment Workers of America, went on strike.  When another manufacturer, Max Lacher on Canal Street, helped out by filling some of its orders "while it is in a crippled condition," as described by The New York Times, the strikers became enraged.

Early 20th century labor disputes often became violent, and on July 20 all 50 strikers stormed the Lacher factory.  The mob was too large for the sole policeman on the beat to handle, and reinforcements from the Leonard Street Station were called in.

"The strikers tried to escape and half of them got away.  They swarmed out of the windows, up and down the fire escapes, and over the roofs to adjoining buildings....The police gathered in twenty-five and took them to the station, in several patrol wagon loads."  The men were held on a charge of rioting.  The Times article ended saying "The police said the strikers wrecked Lacher's establishment."

In April 1911 the Kingsland estate sold numerous properties, including 315 Church Street, at auction.  The new owner found several new tenants, including Barish & Schwartz, which moved in that year.

By 1915 the Caledonian Publishing Co. was here, producing books as well as the popular The Caledonian, An Illustrated Family Magazine.  Also leasing space was the Plato Art Co.  While the printer was best known for its wall calendars, advertising calendars and almanacs, that year it came out with a unique invention--the "Mirrored Hand."


Automobile operators wearing this mirror on the back of their driving gloves could get a rear-view glance by simply raising that hand and glancing at the image.  An ad promised the invention would prevent distractions.  Apparently it was not long before someone realized that mounting the mirror on the car frame worked better, causing the Mirrored Hand to be a short-lived venture.

William E. Wright & Sons, Co. moved in in 1917 from just around the corner at No. 40 Lispenard.  Wright had started out selling cut fabric door to door, until he invented an item that would become a staple for garment manufacturers--bias tape.  He opened a store in 1897 and moved his operation into 315 Church Street in 1915.  The firm's astounding success was reflected in his lease--William E. Wright & Co. took all four floors above the storefront.  Later that year it augmented its marketing by publishing a pamphlet which illustrated uses for bias tape.


William E. Wright & Sons was still here in the early 1920's; but by the 1930's the building was home to the Baker Linen Co., wholesalers of hospital linens.  That firm would remain at least until mid-century.

The changing face of the Tribeca neighborhood was perhaps best exemplified when former factory space became offices in the last quarter of the 20th century.  Here the International League for the Repatriation of Russian Jews established its headquarters in the early 1980's.   In the early 1990's the ground floor was home to Biblio's Bookstore and Cafe, where poetry readings were sometimes held.  By 1995 Bierenbroodspot Gallery had moved in.

Other tenants at the turn of the century were MIA Records, which moved from Houston to New York in 1999; and Mucca Design, here in 2005, and OBRA Architects, USA, in 2007.  In 2010 T & T Plastic Land, Inc. was a "source for canvas carrying bags; also an extensive supply of props," according to Food Styling: The Art of Preparing Food for the Camera.

Today, above the ghastly ground floor modernization, the peeling paint of the Duckworth's cast iron facade disguises luxury residences--another element in the ever-changing personality of the Tribeca neighborhood.