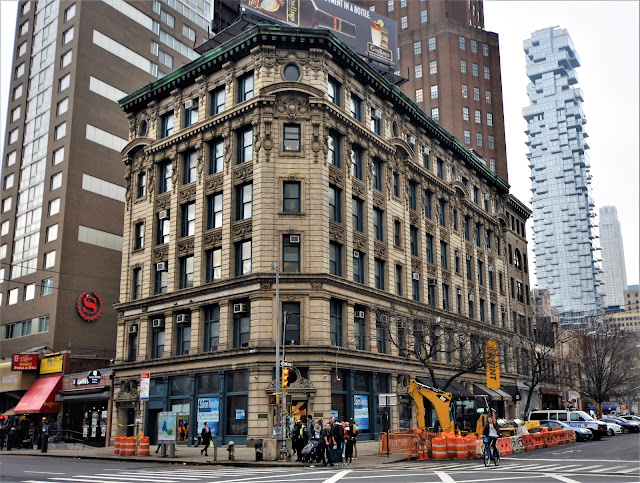 As the 19th century drew to a close, the architectural firm of Brunner & Tryon was busy designing commercial structures throughout the city.  On August 20, 1897 they filed plans for a six-story "brick store and loft" at the southeast corner of Canal Street and West Broadway.  The description gave little hint of the striking structure to come.

Developers S. & H. Rawitser may been somewhat cost conscious, for the Rawitser Building would be almost entirely clad in brick--a cheaper alternative to stone.  Nevertheless, the large structure, which occupies a 75 x 100 foot lot, cost $100,000 to construct, more than $3 million today.

Brunner & Tryon chamfered the corner, allowing for a prominent storefront entrance crowned with a round opening surrounded by exuberant carvings.  Three identical entrances were interspersed along West Broadway on and another on Canal Street.   Cast iron show windows between the banded limestone piers of the ground floor flooded the retail space with natural light.

The upper floors, divided into three sections by prominent cornices, were faced in buff brick which mimicked the banded stone of the ground floor.  The fifth and sixth floors exploded in Beaux Arts gusto with frothy carved decorations.  Arched pediments interrupted the straight line of the fifth floor cornice, which dripped lions' heads, blind roundels, and flowers down the facade.   The round windows above the entrances were mimicked at the sixth floor, uniting the overall design.

The building filled with a surprising array of tenants, including window shade manufacturer Richard J. Cullen, here in 1899.  His advertisements suggested his shade for use by builders and architects for "estates, hotels, apartment houses and office buildings."

Before the turn of the century, The International Arithmachine Co. of Chicago opened its New York office in the building.  The firm manufactured a single, astounding product--an early example of the hand-held calculator.  The company would remain in the building at least through 1903.


The early years of the 20th century saw, among other tenants, an influx of high-end pen manufacturers and sellers.  George W. Heath & Co. advertised its Masonic-themed pen in 1907.  Customers could order "emblems of all the leading fraternal societies," which were "a beautiful combination of gold and enamel."  The pricey pens retailed for $4--about $110 today.

Other tenants, too, dealt with gold and gems.  S. L. Van Wezel employed 61 men in his diamond cutting establishment in 1913.  At the same time Isidore Kottle, whose shop turned out gold and silver umbrella and cane handles, had 20 men and one boy on its payroll.

A far different sort of company was J. P. Gorman Co., which marketed its E-Z-Way "demountable wheel sets" for Ford motorcar owners in 1918.  A replacement for the standard Ford wheels, they were touted as much easier to change.  The Motor Age commented on the invention on September 5 and noted the set included "four complete wheel changes with inside flanges, extra Ford wheel, spare wheel carrier and socket wrench."

Making expensive pens required an inventory of  gold and silver, a tantalizing cache for thieves.  Late on the night of November 29, 1920 burglars climbed the rear fire escape and broke into the Liberty Fountain and Pen Company.  The Evening World dipped into the jargon of hoodlums to describe the crime.

"In a room near the office in front of the building they drilled the big safe, put in the 'soup,' lugging a heavy filing cabinet from the offices and using it as a 'blanket' to deaden the noise and force of the explosion.  The explosion, however, did not do the full job and the burglars were compelled to drill a bigger hole and finally tear the door off with a 'drag.'"

Ignoring the silver and the cash in the safe, the crooks loaded $1,800 in gold bullion into their bags.  They were unable to crack the "burglar-proof receptacle" within the safe, despite numerous attempts.  "This receptacle contained $6,800 worth of gold, used in the manufacture of pens," said The Evening World on December 2.  Nonetheless, the heist netted the robbers about $22,000 worth of bullion in today's dollars.

The diverse tenant list was exemplified by the Parr-Loichot Engine Corp., whose offices were in the building at the same time.  The firm dealt in motor boat engines--about as different from gold fountain pens as a product could be. 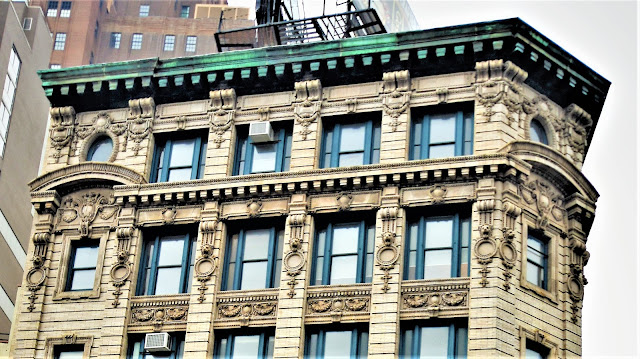 By the early 1940s Henry C. Roberts had opened Roberts Art Gallery and bookstore on the ground floor.  Far south of the established gallery district of Fifth and Madison Avenues, it presaged the numerous galleries that would engulf the Tribeca district half a century later.

About two decades earlier Roberts had stumbled across a bust of Abraham Lincoln in a Salvation Army storeroom.  He paid $5 for the piece, and then began studying the president and collecting Linconiana.  As it turned out, the bust was the first ever made of Lincoln, executed by Leonard W. Volk in 1860 from several live sittings.

Roberts added to his collection with an 1849 campaign photograph.  An inscription on the back said it was presented to Lincoln by Pole Lewis on November 6, 1860, the day he was elected to the presidency.  Roberts purchased it following the owner's death in 1937 for $20.

On July 28, 1947 Roberts put his entire Lincoln collection on display in the gallery.  Along with the exceedingly rare bust and photograph was a copy of Lincoln's death mask; a plaster cast of his right hand, made before his presidency; and engravings and lithographs created during his term in office.

The New York Times wrote an article about the opening of the exhibition, giving special attention to the bust and printing a photograph of it.  It drew nation-wide attention, especially since Roberts mentioned in the article that he would eventually like to donate the collection to a national institution.

Letters from across the country arrived at the Canal Street gallery and bookstore.  Then, in February 1949. one arrived from Frank T. Gartside, assistant superintendent of the National Park Service.  In it he said his department "would be happy to receive the bust to be placed in the Lincoln Museum housed in the Ford Theatre."  It was the sort of place Roberts had envisioned for the item and he donated it--valued at about $50,000 at the time--to the museum.

The colorful Henry C. Roberts was interested as well in other-worldly things.  He sometimes gave lectures on the 16th century seer Nostradamus and once explained "My aim in life is to help people help themselves by developing their psychic powers.  I've got extra-sensory perception developed to a very high degree.  I found these powers through studying Nostradamus.  Some people say I am Nostradamus Redivivus, which means Nostradamus revived."  In 1947 he published The Complete Prophecies of Nostradamus.

Roberts's unusual personality drew a reporter from The Times to his shop in 1949.  He commented "in the dimmest corner of an age-haunted room Mr. Roberts sat at a battered desk, doddling with a quill pen.  The grudging glow of a brass lamp picked out a bronze skull on the desk."

Roberts pointed to a hanging planter of ivy and said "I can look at that bowl and see things."  His wife was less impressed than was the reporter.  "See if you see a steak.  You didn't eat all day," she retorted.

In 1951 Roberts announced he would be retiring.  The New York Times commented "The rambling place was a sort of combination bookstore and curiosity shop.  Its proprietor himself sometimes seemed uncertain of all it contained."  No doubt the most interesting character to lease space in the building's history, Roberts died in the Veterans Administration Hospital in Brooklyn on January 24, 1966 at the age of 76.

In 1980 the space where Roberts had operated his gallery and bookstore was transformed into a restaurant-bar.  For a decade it was home to Smoke Stacks Lightnin' bar which Moira Hodgson of The New York Times called "a restful place for a late-afternoon drink" in 1981.  She added "It is popular among artists who can no longer afford to live in SoHo and have moved down to TriBeCa."

In 1990 the space became Tsubaki House, a jazz-oriented cabaret.  Today the entire ground floor is vacant, a condition that could cause locals and preservationists trepidation. 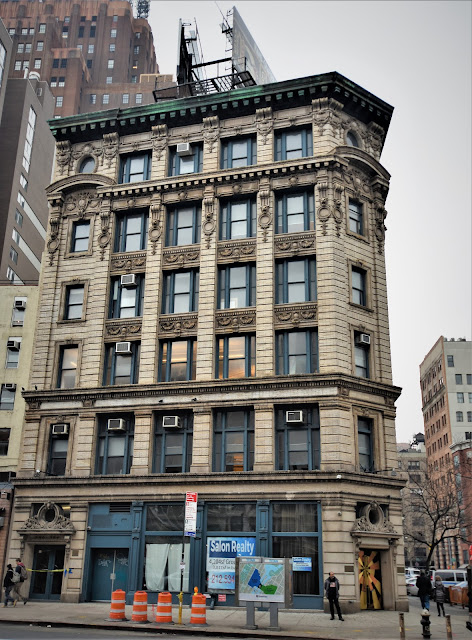 Because the Rawitser Building sits outside the Tribeca Historic District, its intact facade--including the amazingly surviving storefront level--is unprotected.  Owners or tenants have no restrictions on altering the building and potentially vandalizing Brunner & Tryon's striking 1897 building.