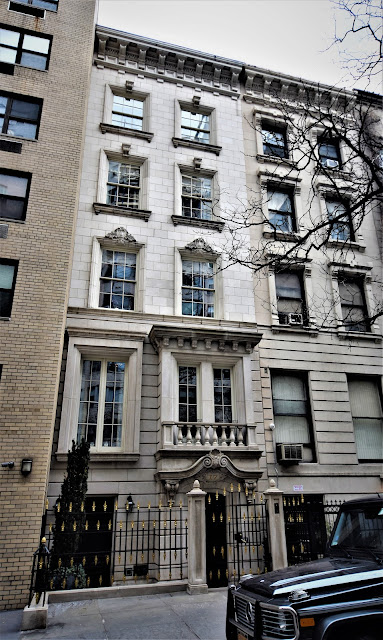 Edward Livingston entrusted his contractor, John H. James, with two $1,200 checks on November 7, 1895.  James, who lived in Cornwall, New York, was doing work for him and told Livingston that he was staying with "Mrs. Woods" at No. 17 East 83rd Street.  James left with the checks--worth nearly $75,000 today--and headed for the Bank of America.  That was the last time he was seen.

On November 11 The New York Times reported "The brownstone residence at 17 East Eighty-third Street was closed when a reporter called there yesterday, and it appeared as if it were not occupied.  A card showing that it is for rent is displayed.  A ring at the bell brought two servants from the basement.  They said that Mrs. Woods had gone to Cornwall."

The home of the mysterious Mrs. Woods was identical to others on the north side of 83rd Street between Fifth and Madison Avenues.   Two bays wide, it was faced in brownstone.  A stone stoop rose above the high English basement.   Molded architrave frames embraced the openings of the upper stories and a handsome bracketed cornice completed the design.

Following the turn of the century No. 17 was owned by David Lydig, who used it as an investment property.  His fascinating tenant was attorney Abram Jesse Dittenhoefer.  Born in Charleston, South Carolina to Jewish-German immigrants Isaac and Babette Dittenhoefer in 1837, he had moved to New York prior to the Civil War.  He was now a member in the firm of Dittenhoefer & Gerber.  His wife, the former Sophie Englehardt, died in 1900.  The couple had had five children, Estelle, Belle, Edith, Blanche and Irving.


Living with her father was Estelle, who had never married.  The 50-year old spinster was a member of the Academy of Political Science in the City of New York in 1912.  Her interests in things political was understandable, given her father's background.

Abram Dittenhoefer first garnered attention during the Civil War.  A Jewish Republican leader and staunch abolitionist, he lived on West 34th Street and Eighth Avenue and was instrumental in directing Abraham Lincoln's presidential campaigns.  He first met Lincoln on the night of February 27, 1860 after the candidate's famous speech at Cooper Union.

When the Draft Riots broke out in 1863.   On July 12 a mob formed in front of the house. shouting "Down with the abolitionists" and "Death to Dittenhoefer."  According to Dittenhoefer years later, a messenger who was spirited out of the house ran to the police.  Their "active club work" managed to dispel the crowd.

Dittenhoefer worked closely with Lincoln and the two men became friends.  He described the President in a letter to Isaac Markens which said in part "While an air of melancholy seemed always to suffuse his features, I always regarded President Lincoln as the most genial of men."  He later said, "He was a very awkward man, but after he began to talk, he was awkwardness deified."

Lincoln was not the only President whose career was boosted by Dittenhoefer.  In 1880 James A. Roosevelt brought his nephew, Theodore Roosevelt, to Dittenhoefer's office "and said that the young man desired to embark upon a political career," according to The Sun years later.

"Mr. Dittenhoefer said he was interested in young Roosevelt and promised to help him along in the politics of the Twenty-first Assembly district.  A little later Theodore Roosevelt got his first nomination and went to the Assembly after a comparatively featureless campaign."

In 1913 David Lydig renewed Dittenhoefer's lease for another 10 years.  That same year he commissioned architect John H. O'Rourke to do minor renovations to the house, amounting to $700.

Dittenhoefer published his highly popular How We Elected Lincoln: Personal Recollections in 1916.  The following year on March 17 his home was the scene of a brilliant reception in honor of his 80th birthday.  The Emanu-El Review reported "The revered celebrant received more than two hundred letters and telegrams of congratulations, as well as numerous gifts and other attentions."

On the night of February 23, 1919 Abram J. Dittenhoefer suffered a fatal cerebral hemorrhage in the house.  The Sun not only called him the "last surviving elector of President Lincoln," but "one of the best known authorities on international copyright law."

The following year the estate of David Lydig sold No. 17 to real estate operator James W. Bulmer for $55,000--about $673,000 in today's dollars.  Bulmer was manager and a director in the real estate office of Harris & Vaughan.  The New-York Tribune reported on February 10, 1920 that the firm planned to make "extensive alterations into American basement."

The "American basement" plan had replaced the English basement with its high stoop years earlier.  While the stoop was removed and the entrance lowered, the completed renovations did not change the floor levels.  The doorway was now at the former basement level, several steps below the sidewalk, and the original entrance was only slightly disguised as a baluster-fronted window.  Fussy French-style cartouches and a swan neck pediment above the doorway gave the old rowhouse a Beaux Arts touch.

The renovated house became home to heiress Llewellyn S. Parsons.  The daughter of Charles and Sarah Johnson Shepley Parsons, Llewellyn never married.   While the house appears to have been rarely the scene of entertainments, Llewellyn's name (always reported as "Miss") regularly appeared in society columns.  Her summer home was in Kennebunk, Maine.  Following her death at the age of 81 on September 27, 1956 she was buried in the Hope Cemetery there.

Within months of Llewellyn's death No. 17 was converted to apartments--a duplex on former parlor and second floors and two apartments on each of the top two.  The ground floor became the Aaron Furman Gallery.  Among first exhibitions here, in October 1957, was of "various interpretations of animal forms by pre-Columbian, African and ancient Chinese artists," according to The Times.  The newspaper said "It is the kind of show that should be seen piece by piece rather than style by style."

Change came to No. 17 once again in 2003 when it was re-converted to a single family home.  It was the scene of a "major gift dinner" hosted by Louis and Patrice Friedman on November 4, 2010 for Stanford University alumni.

The house was back on the market in 2015 with an asking price of $24.5 million.  While decades of renovations eliminated much of the 1920 interiors (and certainly nearly nothing of the original 1870's detailing remains), some rooms survive surprisingly intact.  And outside little has changed since James Bulmer gave the mundane brownstone a new French personality.