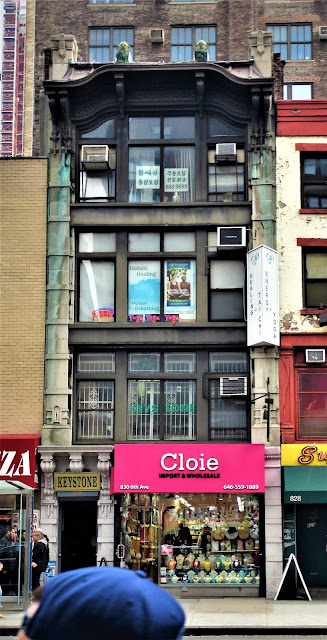 Following Emanuel Lemon's retirement the firm became J. E. Lemon & Co.  In November 1906 Joseph purchased No. 478 and relocated the office into the building.   Two years later he set architect Oscar Lowinson to work to remodel the former house.  On December 15, 1908 the New-York Tribune reported "Plans have been filed...for making over the old-fashioned four story and basement dwelling house, with store, at No. 478 Sixth avenue into a modern loft and store building, rebuilding the front in ornamental pattern of iron, with brownstone trimmings and large glass windows."

The $8,000 in renovations resulted in a stylish mixture of the Art Nouveau and Beaux Arts styles.  Most eye-catching was the sinuous cast metal cornice which followed the scalloped shape of the French-inspired openings below.  Perched above were unusual finials--nested stone orbs on copper pedestals.  If Lowinson had in fact originally contemplated using brownstone, he changed his mind.  While the limestone he used for the base and piers was more expensive, it was a more appropriate choice for the architectural style.

Furriers Semmel & Meisler operated from the second floor by 1911.   Early in October that year a suspicious-looking man wearing a raincoat with his hat pulled down entered.  Saying he represented a burglary insurance company, he said he was there to inspect the wiring of the workrooms and storerooms.  When Psachje Semmel asked him for credentials, the visitor could only produce a few blank application forms.  He was told to leave.

It appears that the "inspector" was, in fact, casing the shop.  Semmel & Meisler did have a burglar alarm and it proved its worth about two weeks later.  Policeman Fitzgerald was doing his rounds early on the morning of October 28 when he heard the clanging from within the building.  He called for assistance by rapping his baton on the pavement, drawing the attention of Policemen Murphy and Gorman and Detective Bauerschmidt.

While the two patrolmen stood guard in front of the building, Fitzgerald and Bauerschmidt went to the rear where they found the drop ladder of the fire escape pulled down.  The pair climbed to the top floor where the iron shutter of the Roth Embroidery Company had been forced open.  The entered.

The lock on the company's hallway door had been broken.  On the third floor the officers found the door of the Brilliant Sign Company forced open.  Like Roth Embroidery Company, it had no burglar alarm.  Inside Fitzgeralnd and Bauerschmidt found a two-foot hole which the crooks had chopped in the cement floor.  A rope dangled down into the Semmel & Meisler space.  The two cops shimmied down the rope into the darkness.  What they found was astounding.

The Evening World reported "On the floor at the bottom of the hole lay a saw, a brace and two bits and a heavy pair of scissors for cutting metal.  Near by was a bottle of bromo seltzer, some sandwiches and some grapes, and all over the floor were bundles of furs that the thieves had evidently prepared to be taken when one of them accidentally touched the burglar alarm and they were compelled to flee, leaving their plunder."

The food was evidence that the thieves had intended to take their time in picking out their booty.  They had chosen only "the choicest skins" and had carefully wrapped enough packages to fill a wagon.  Police surmised that "the thieves planned to carry the bundles up to the fourth floor and down the fire-escape to the ear, where a wagon would have met them to haul away the plunder."

It was assumed that this was the same gang who had pulled of a nearly identical heist a few nights earlier.  In that case a hole was dig through a cement floor to get into Samuel Saxe's fur shop at No. 24 West 24th Street.  The made off with 1,000 mink pelts.

The ground floor store was home to the West Side Loan Office, a pawn shop.  On September 7, 1912 a young woman entered with a bracelet which she pawned for $4.  Twelve days later she returned, this time with a diamond ring for which she was given $10.   Pawning her precious jewelry was a hint of problems in the woman's life.

Wilhemina M. Hadlow was about 27 years old and for a little over a year had lived in a furnished room at No. 64 West 91st Street.  She had been a clothing designer (of women's waists) but for some time had been out of a job.

Part of the money from her pawned jewelry was spent on September 21 for a $3 stateroom ticket on the Hudson River steamboat Adirondack to Albany.  Before she left her 91st Street room she filled a trunk with her clothes and had it shipped to Mabel Peterson in Thompson, Connecticut.  She then left New York City for good.

On board the Adirondack Bert Dewey noticed her crying.  He managed to engage her in conversation and she told him she was "suffering mental anguish which she could not withstand."  He later told authorities she said "she would never reach Albany."  She handed him a letter and asked him to mail it when the boat docked.  "Dewey counseled her to keep the letter until she arrived and mail it herself," reported The New York Times.  "He also obtained from her a promise that she would take breakfast with him in Albany."

Concerned, he went to her cabin door that night.  Hearing her moving around, he assumed she was alright.  But when the steamer reached Albany, there was no sign of Wilhemina.  The letter she had asked Dewey to mail was found torn up in her stateroom.  Another letter, addressed to Mabel Peterson, was found in the steamer's letter box.  It stated she was sending her "some clothes.  I won't want them any more, and thought you would like them."  Investigators surmised she had jumped overboard somewhere between Catskill and Hudson, New York.

In 1918 Joseph Lemon received orders from the City to make extensive safety improvements in the building.  He and Oscar Lowinson had continued to work on projects together, and he consulted the architect on this expensive and, most likely, unexpected renovation.  The City demanded a new rear fire escape, an interior fire staircase enclosed in fire-resistant materials, replacement of the inward-opening street level door with one that opened outward (to facilitate escape in case of fire), and double fire doors to the interior staircase.  A separate violation required the installation of a fire alarm system.

Lowinson filed a request with the Board of Standards and Appeals requesting a "variation of the requirements" that would relieve Lemon of the renovations.   The Board ruled on February 28, 1918 on both counts:  "denied."

As the fur district moved north of 34th Street, No. 830 drew a variety of new tenants.  The ground floor store was home to the Gem Luggage Shop by 1928.  On the afternoon of January 31 that year Joseph Vernazza was the only employee on duty, but he was more than enough to thwart an armed robbery.

The New York Times reported "A hold-up man dashed out of the Gem Luggage Shop, 830 Sixth Avenue, at 2:30 o'clock yesterday afternoon, leaving his pistol on the floor and probably happy to be able to run."  When he decided to go up against Vernazza, the newspaper said he "had picked a tartar."

The man had come in asking to see a bag.  When Vernazza turned, the supposed customer struck him over the head with his gun.  Instead of knocking Vernazza out or dazing him, the blow merely angered him.  He wrested the weapon out of the man's grasp and the would-be robber ran.

Vernazza told the reporter "I'm sorry he got away.  It would give me pleasure to kill such a man.  I could kill him with my bare hands," and simulated the motion it would take to do so.  The pistol had made a gash on his head, which was covered by a bandage.

"It's nothing to what I could do to that fellow if I could catch him," he seethed.

For more than a decade, beginning around 1939 the Atlas Personal Finance Corporation was in the building.  The Sixth Avenue neighborhood had increasingly grown as the center of Manhattan's Flower Wholesale District, and by 1958 DeMarco & Vlachos, Inc., wholesale florists was operating from No. 830.

By 1977 more flowers were sold in Manhattan than any city in the world except Amsterdam.  But as the 21st century neared, developers increasingly eyed the Flower District for new apartment buildings, hotels and office buildings.   Little by little the flower merchants were forced out until today there are only a handful of holdouts.

The striking 1909 facade is surprisingly intact, including the stone entrance with its heavy scrolled brackets and the banded piers that frame the modern show window.  The oxidized copper cornice has stained the white stone blue.  The building is unprotected by landmark status, so its continued survival is solely in the hands of any future owner or tenant.