John H. Steinmetz arrived in New York City from Germany at the age of 16 in 1841.  In 1868 he opened a woodworking shop on East 39th Street and soon turned his attention to building and development.  Decades later, on February 17, 1917, the Real Estate Record & Builders' Guide pointed out, "He became one of the pioneer builders in the Murray Hill, Upper West Side and Harlem sections of Manhattan, where he built hundreds of private dwellings."

Steinmetz increased his profits by cutting out the middle-men.  He purchased the vacant tracts directly, sometimes putting the titles in the name of his wife, Elizabeth, and he acted as his own architect.  The Record & Guide said "on account of his unusual activity in the building lines for so many years, was one of the best known men in the construction field."

In 1885 he embarked on the construction of a row of four brownstone-fronted houses at Nos. 239 through 245 West 71st Street, between Broadway and West End Avenue.  Just 18 feet wide, they would be three stories tall above a deep English basement.  While other Upper West Side architects often toyed with their rowhouse designs--creating symbiotic yet individual facades--Steinmetz's houses were identical.

The completed homes were self-assured examples of the popular neo-Grec style.  Beefy cast iron newels stood guard at the base of the brownstone stoops which rose to double-doored entrances capped by prominent cornices.   The nearly-identical architrave frames of the openings at each story echoed the doorway.

No. 241 became home to the family of Townsend Jones.  Born in Cold Spring Harbor, Long Island, on May 14, 1854, he came from a long-established New York family.  His first ancestor in America was Major Thomas Jones, one of the earliest settlers on Long Island.

After a private school education, Townsend graduated from Columbia College in 1876.  Three years later he married Katherine S. Howard, daughter of Rev. Robert T. Howard, the pastor of St. John's Church in Cold Spring Harbor.  (Interestingly, that 1835 church sat on former Jones land and, according to The Historical Register in 1919, "was built by the Jones family.")

By the time Jones purchased the 71st Street house, he was a member of the law firm of Hand, Bonney, Pell & Jones.  Wealthy and highly-respected, he was a member of the Metropolitan Museum of Art, the Downtown and Lawyers Clubs, and of the Seawanhaka and Huntington Country Clubs.  In 1888 he was accepted into the Saint Nicholas Society, which limited its membership to those whose families had been in New York prior to 1785.  In addition to his other charitable interests Townsend was secretary and treasurer of the Havens' Relief Fund Society.

Around the turn of the century Townsend moved to No. 140 West 74th Street, and No. 241 became home to a relative, Joshua I. Jones.   In May 1902 his wife's bachelor brother, Charles W. Labagh, was in town from Cold Springs Harbor where he owned "a fine home" which he shared with his father and unmarried sister, Louise.  Charles, whom The Times said "is reputed to be very wealthy," was staying at the Hotel St. Andrew on Broadway at 72nd Street.  A sort of family reunion was planned for the afternoon of May 12, but things took a horrific turn.

Louise Labagh came to town with their other sister, Mrs. John D. Hewlett and her husband.  The trio, along with Charles, convened at the Jones house with plans to take go on an outing.  Joshua had hired a barouche--an open carriage capable of accommodating several passengers--for the occasion.

Just after 3:00 the group was about to head out the door to the carriage when Charles Labagh excused himself, saying he had to get something upstairs.  The family waited in the parlor until finally John Hewlett said he would go upstairs to hurry Charles along.

When he reached the third floor bathroom, he found Charles on the floor in a puddle of blood, having slashed his throat with a razor.  "No sooner did Labagh distinguish Mr. Hewlett's features than he made a wild dash for him, and what was to be the first of two desperate struggles between the men was on," reported The New York Times.

The two men wrestled while Hewlett tried unsuccessfully to calm his brother-in-law.  The Times wrote "Labagh is a powerful man, and Mr. Hewlett soon found his hold on him loosening.  Finally the would-be suicide threw him off and dashed into the hallway."

Charles headed straight for a window.  John caught up with him and "fought with all his might to overpower him."  Charles rained blow after blow on John, who refused to let go.  In the meantime, the family sat chatting in the parlor, no doubt wondering what was taking so long.

John Hewlett eventually proved no match for the deranged Labagh.  "Once at the sill the wounded man, with a terrific effort wrenched himself from his brother-in-law's arms, cleared the window, and fell to the ground, landing on his back."

The tranquil scene downstairs quickly changed when Hewlett, exhausted, staggered into the parlor covered in blood.  He managed to give them a brief explanation then went out to find help.  He found Policeman Cahill who "sent a hurry call to Roosevelt Hospital."   Despite his numerous injuries--he suffered from shock and a severe loss of blood, as well as contusions of the back--Charles survived.

The trauma for the family was understandably intense.  The following day The Times reported "Mr. Jones's house on Seventy-first Street was boarded up last night, and the watchman on the street said the family had left the city for the Summer, he understood."

In 1907 the house was owned by another Cold Springs Harbor resident, Mrs. J. H. J. Stewart.  That year she did $3,000 in improvements, hiring architect Ernest Alan Van Vleck to design a one-story extension to the rear, replace doors and upgrade the plumbing, including new toilets.  Mrs. Stewart sold the house in 1911 to Dr. William Francis Fluhrer and his wife, the former Emily (fondly called Emma) Caroline Pullman.

The Fluhrers had lived at No. 449 West End Avenue; and in the Belgravia Apartments at No. 611 Fifth Avenue before that.  The Belgravia had been built by Emily's uncle, George M. Pullman of the "palace train car" fame; and upon his death in 1897 she and her sister, Helen Pullman West (who also lived there), received equal shares in the Belgravia's "furniture, pictures, &c."

Following Milton's marriage to Elsa M. Arndt on November 14, 1914, he became a director in the firm of his father-in-law, Christian Arndt.  The wedding in the Arndt home at No. 410 Riverside Drive was followed "by a large reception," according to The Times.

Four months later, on March 24, 1915, Emma Pullman Fluhrer died suddenly.  Her funeral was held in the house three days later.  Despite his advancing age (he was 69 years old at the time), William stayed on in the house with his daughter for several more years and continued his medical practice on Madison Avenue.

Interestingly, when he and Helen were looking for household help in 1919, they seemed to have carefully avoided the words "maid" or "servant":

When William finally retired and moved to Mountain Dale, New York, the 71st Street house became home to another doctor.  Waite A. Cotton was a well-known and respected dentist, as well as vice president of the Industrial Motor Car Co., which manufactured light delivery trucks. 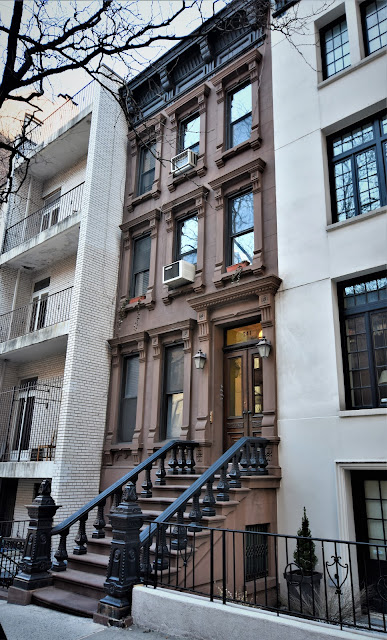 He and his wife, Florence, moved in by the mid-1920's.   The president of the First District Dental Society, Cotton was the author of scholarly articles such as "Nutrition and its Influence During Orthodontic Treatment" which appeared in the August 1931 issue of The International Journal of Orthodontia, Oral Surgery and Radiography.

When Dr. LeRoy L. Hartman developed a local oral anesthetic in 1936, Popular Science magazine exclaimed that his "desensitizing substance robs the dentist drill of its terrors."  Dr. Cotton was equally enthusiastic.  The formula was revealed at a special Dental Societies meeting at the Hotel Commodore on January 21, during which Cotton addressed the assemblage.  He said in part:

A dentist has again contributed to modern science by developing a desensitizer for the painless preparation of cavities in teeth, adding another major forward step in dentistry and a blessing to humanity, as it will take away that dread of the dentist."

Despite his optimistic prediction, seven decades later trips to the dentist are still dreaded and innumerable patients might argue with Dr Cotton that the drill is anything but "painless."

In 1944 Violet Martens, who went professionally as Vi, moved her voice coaching studio from Chicago to the Barbizon Plaza.  The Musical Leader lamented, "When Vi Martens decided to make New York City her home Chicago lost one of the best liked musicians for nowhere is there a busier teacher, coach or accompanist."

She moved her studio to No. 241 West 71st Street early in 1948.   Here, for several years, she would train young voices for a career in opera.


In 1955 No. 241 was converted to apartments, two in the basement level and one each on the upper floors.  But the alterations did not signal the end of the arts here.  On February 28, 1958 tenant Nico Castel participated in Town Hall's first "Joy in Singing" competition.  The Portugese-born tenor won first place, earning him a debut recital in Town Hall later that year.

The 1955 layout remains today, no doubt thanks to the narrow proportions of the house.  Rather amazingly, much of John H. Steinmetz's Eastlake-style interior detailing survives after 120 years.  And, unlike the other houses of the row, its outward appearance is barely changed.