By the turn of the last century the Stern Brothers Department store had been enlarged twice.  It sat mid-block between Fifth and Sixth Avenues on West 23rd Street, the northern edge of shopping district known today as the Ladies' Mile.  The store's tremendous success had necessitated two large, architecturally seamless wings on either side of the original 1878 structure.

Next door was the Queen Anne-style Conover Building, erected for J. B. Conover & Co., a prominent manufacturer of "grates, fenders, fireplaces, wood mantels, and tiles."  Following that firm's bankruptcy in 1893 Stern Brothers expanded into the building; but that, too, proved insufficient.

In 1910 Stern Brothers commissioned the well-known architectural firm of Maynicke & Franke to replace the six-story Conover Building with a twelve-story "annex" that would extend through the block (taking the place of four brownstones on 22nd Street).  Unlike the earlier expansions, the building would make no attempt to meld with the main store.

Entire faced in limestone, the annex, was completed in 1911 and towered over the main store.  It flexed its individual personality with monumental, two story columns at street level.  Their colossal size, intricately decorated fluting and ornate Scamozzi capitals provide a stately presence.  A full-width stone balcony above the third floor introduced the relatively unadorned central section.   Smooth, engaged columns at the 11th and 12th floors support the heavy brackets of the slightly arched cornice. 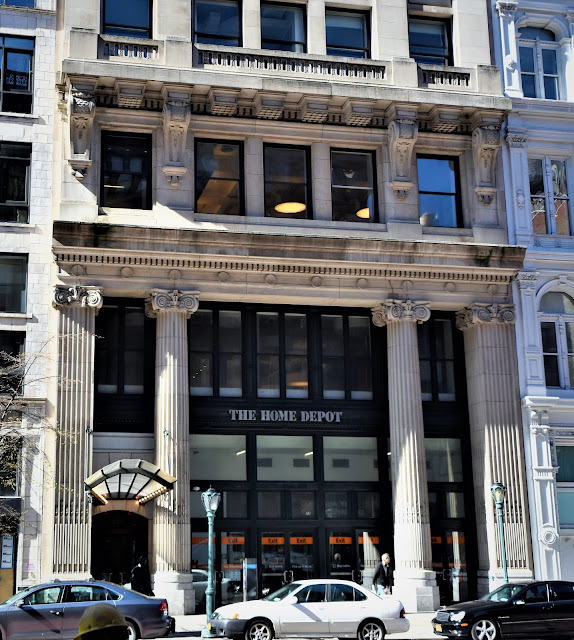 The dignified structure cost more than $18.5 million in  today's dollars.  It came with another horrible expense as well--the loss of a worker's life.   James Thompson was doing electrical work as the building neared completion on May 19, 1911 with a mason on the seventh floor lost his grip on a brick.  The Sun reported "The brick from the seventh floor smashed his head and he died before an ambulance arrived."

Even before plans were laid for the annex Stern Brothers was well aware that department stores were abandoning the Ladies' Mile.  The migration had started when Roland H. Macy announced plans to move to Herald Square in 1901.   Therefore, according to the Real Estate Record & Builders' Guide in 1913, "The new building was of the loft construction type, as it was recognized that a removal would probably soon be advisable."

And, indeed, a removal was soon to come.  In August 1913 Stern Brothers announced it would be relocating to 42nd Street.  Within the year the firm had hired Starret & Van Vleck to alter the the relatively new annex "for loft and store purposes."  The extensive renovations--including removing the excessive elevators (necessary to a department store but not a loft building), adding new beams, reinforced concrete floors and iron staircases--took a year to complete.

Now called The Stern Building, the remodeled structure quickly filled with tenants.  Walker & Heisler signed a lease for the store and basement--fully 50,000 square feet, in July 1915.  The well-known carpet store had been on East 16th Street for many years.  The $16,000 annual rent was substantial--more than $33,500 per month today.

A major tenant was Chicago-based mail order firm Montgomery Ward & Company.  In May 1915 it leased the eighth through the 11th floors for its buying offices and factory space for its "women's wearing apparel and millinery."

Another well-known tenant would be the W. T. Grant Company, which signed a lease in June for the fourth floor.  The firm operated "25-cent department stores" nationwide.  The Record & Guide reported "The space will be used for general offices and for the buying and distributing of merchandise."

Another of the intial leasers was the World's Market Corporation, which took the 12th floor and subsequently simplified and revamped buying trips of out-of-town merchandise buyers.   Now, rather than rushing from building to building, buyers could visit 75 showrooms in one location.   The World's Market was opened in March 1915.

The American Angler explained a few weeks later, "The floor is laid out with rows of big, roomy, mahogany showcases, equipped with easy rolling glass doors.  A buyer may examine any garment in a moment and replace it so that it is always fresh and clean.  On the 22d Street side of the floor is a series of private booths occupied by manufacturers who prefer to show their goods in private.  The booths are elegantly furnished and most of them have mirrors and wardrobes."

Because the sales staff was furnished by World's Market Corporation, not the manufacturers, the buyers were not pressured.  "Our salespeople display the lines you want to see, without preference," said an ad.  On March 14, 1915 The New York Times supported the claim, saying "The merchandise is shown and the orders are taken by the sales force employed by the corporation.  In other words, there are no commissions paid by manufacturers to tempt the sales force to thrust goods on the buyers."

At the time Americans were just getting used to paying the new Federal Income Tax, ratified in 1913.  Now the Stern Building received an unexpected tenant.  The New-York Tribune reported on September 18, 1919 that the second floor had been leased to "the United States Government, Department of Internal Revenue."

The department not only oversaw the collection of income tax, but the enforcement of Prohibition.  The State Director of Prohibition, Charles R. O'Connor, shared the second floor with the Federal agents.  His office was responsible for, among other things, "the granting of many permits of one kind or another," according to The Sun on February 22, 1920.  "It is at this office that physicians and druggists are given their permits, as well as the manufacturers who want to use non-beverage alcohol."  O'Connor's agents also did investigations, making sure, for instance, that a hair-tonic manufacturer was using his alcohol for hair-tonic.

The Federal offices were understandably besieged at tax time.  On February 15, 1920 the New-York Tribune reported "The Collector is prepared to handle a flood of returns in the next four weeks--the last day for filing returns is March 15."  The office anticipated "close to $1,500,000,000" in payments, according to the article.

Later that year the IRA moved downtown.  In 1921 the Stern Building received several new tenants, including A. Barsa & Bro., manufacturers of silk kimonos, which took two floors; the Dexter Folder Company, which leased space for its executive offices and showroom; and the Reuben H. Donnelly Corporation, which took the fifth floor.

Although the Reuben H. Donnelly Corporation published a variety of items, it was best known for its Classified Telephone Directory--later known as the Yellow Pages.  It would remain in the building throughout the 1920's, as did the W. T. Grant Company and in the Walker & Heisler carpet store.

As disturbing changes in German politics were taking place in the 1930's, the Paris Decorators Corporation had its general offices in the Stern Building.  The interior decorating firm had nine branch stores in Manhattan, Brooklyn and Newark.    In September 1933 it closed its German office.  Seven months later The New York Times ran the headline "Decorators Ban Reich Goods" and explained that the firm "announced yesterday that it had discontinued all purchases in Germany."

For decades thieves city-wide had taken advantage of the fact that workers were paid in cash.  They carefully watched the movements of employees, learning their routines of trips to the bank.  The rash of payday armed robberies during the Depression years prompted the New York Police Department to offer an armed escort around 1934.  The Divineform Brassiere Company, Inc. chose to take its chances.

On July 1, 1936 The Times reported "Shortly after 2:30 yesterday afternoon three men, at least one of whom was armed, followed Max Ladenheim, manager of the company, into an elevator, forced him and five other passengers to raise their hands, took an envelope containing between $2,300 and $3,000 and escaped."   Police officials did not hide their annoyance, telling reporters that The Divineform Brassier Company "had failed to take advantage of protection offered."

At the time of the robbery Universal Camera occupied a floor in the building.  Photography and home movies were a popular national hobby.  The firm not only manufactured still cameras, but had perfected the portable 8-mm. movie camera.

The company cleverly pushed its Mercury model camera in the summer of 1941 by staging a photography competition.  It offered $1,000 in prizes for the best pictures; the catch being that they had to be made using only that camera.

When the United States entered World War II, Universal Camera Corporation turned its focus on making military binoculars.  Workers were paid $20 to $30 a week for what was termed "war jobs."  The work also exempted them from military service under the Selective Service's "work of fight" order.

Five men hired in the fall and winter of 1943-1944 took advantage of the exemption.   They soon left, taking jobs that earned them much more, but did not bother to notify the Selective Service.  All five were arrested on March 27, 1945 for avoiding the draft.

Two years later two employees, David Whittaker and Norma Holt, would be the victims of a bizarre and horrible crime.  The 33-year old Whittaker was the assistant to Universal Camera's president, Otto Githens.  He lived in the London Terrace Apartments a few blocks west on 23rd Street and was carrying on an affair with the married 30-year old Norma Holt.

Norma's mother, Mrs. Elsie Thomas, lived in Hollywood, California.  She received a call from Norma on the night of March 9, 1949.   The call was coming from David Whittaker's apartment and a gun was pointed at Norma's head.  Mrs. Thomas later said "I knew something was wrong when I heard Norma sniffling.  She would never worry me unless something serious was the matter."

Norma's husband, Emory, suddenly grabbed the received.  He told his mother-in-law, "I'm very sorry for what I'm about to do."  Mrs. Thomas told investigators "I pleaded with him, but he said, 'It's too late, mama.'"

Mrs. Thomas then heard a three gun shots.  "I dropped the phone and fell over in hysterics."  She made a frantic call to a friend in New York, telling her to call the police.

The New York Times reported "The scene they beheld when they entered with a passkey from the superintendent was reminiscent of a Hollywood melodrama, except that this was real-life tragedy."

David Whittaker was seated upright on the sofa with bullet wounds to the head.  Next to him was Norma Holt, "wearing a printed silk blouse and blue skirt."  She was shot through the heart and in the head.  "Slumped over a chair and an end-table near the sofa was the body of Mr. Holt, his fingers still gripping the pistol, with a bullet through the heart, fired, the police said, by himself after killing his wife." 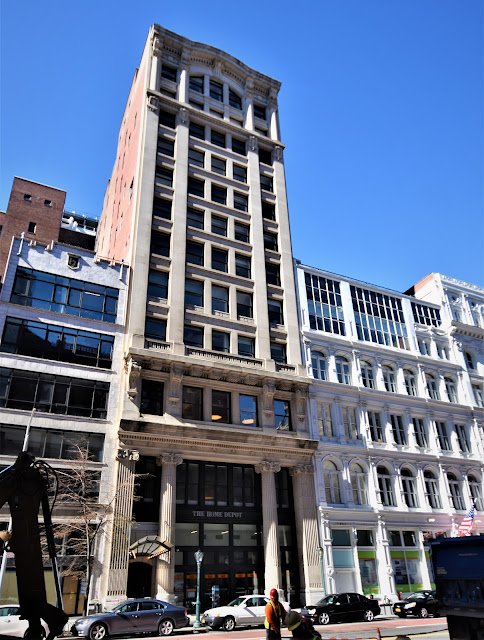 Throughout the rest of the century the building continued to house a variety of businesses.  In 1986 the upper floors were converted to offices.  When the Home Depot took over the the former Stern Brothers Department Store building in 2004, it was internally joined with the Stern Building at ground level.