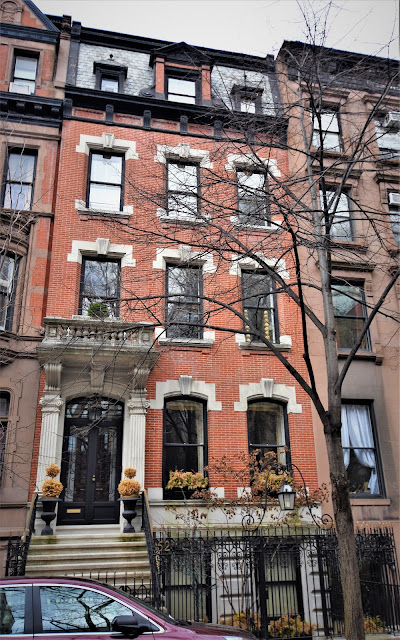 Born in Wiesbaden, in western Germany, J. Wilheim Schickel was 25 years old when he arrived in New York City in 1875.  Trained as an architect, he quickly found work in the office of Richard Morris Hunt, then struck out on his own.

Embracing his new culture, he anglicized his name to William Schickel.  His rapid success resulted in substantial commissions.  On April 4, 1881 The New York Times reported on the mansion of Robert Stuart under construction on Fifth Avenue at 68th Street, saying it "will prove one of the most notable ornaments of the avenue."

As the Stuart mansion rose, Schickel turned his attention to matters closer to home.  On July 1, 1881 he filed plans for "one three-story and mansard roof dwelling" at No. 52 East 83rd Street for his family's home.

Projected to cost $15,000--about three quarters of a million dollars today--the red brick house would sit on a rusticated stone English basement.  The robust entrance consisted of fluted Ionic pilasters which upheld beefy scrolled brackets which, in turn, supported a stone balustraded balcony.   The keystones of the eye-catching limestone lintels were slightly different at each level.  Above the cast iron cornice the steep, slate-shingled mansard sprouted three dormers, the middle dormer being faced in brick.

Even at 24-foot wide the home might have been a bit crowded.  Schickel and his wife, Elise, had 11 children.

Schickel partnered with Isaac E. Ditmars and Hugo Kafa in 1885, to form the firm of William Schickel & Co.  In 1895 the name was changed to Schicek & Ditmars.

A devout Roman Catholic, Schickel was active in religious and German-American circles as well as professional organizations.  The 1900 Biographical Directory of the State of New York listed his memberships in the Catholic Club, the Architectural League, the American Institute of Architects, the Chamber of Commerce, and the Aldine Association (incorporated in 1889 to "encourage literature and art").

On May 22, 1896 William Steinway presided at a meeting of German-Americans to organize the "German-American Sound-Money League."  The purpose was to rally German-born citizens around the gold standard, which was in jeopardy in the upcoming elections.  Among the committee members appointed that evening was William Schickel.

In the meantime, he had designed scores of significant structures, including the striking Church of St. Ignatius Loyola near the Schickel residence, on Park Avenue at 86th Street; the Basilica of Our Lady of Perpetual Help in Boston; and the Most Holy Trinity Roman Catholic Church in Brooklyn.

In April 1907 the Catholic Club opened an art exhibition of works by members.  Included were paintings by James Fagan, Laurel Harris and John F. Kaufman, and sculptures by John J. Boyle.  Also on view were architectural renderings, including, of course, examples by Schickel.

It would be the last public event involving the architect.  He died in the 83rd Street house just two months later on Friday, June 14, 1907.

Elise remained in the house with some of the still-unmarried children.  William Jr. was still here when he went into his own business the following year with partners John G. Hanson and Bruno Benziger.  The trio incorporated the plumbing firm of Hanson & Schickel.

Also in the house was Norbert who founded the Schickel Motor Co. in 1911 at the age of 25.  Norbert had been swept up in the motorcycle boom that inundated the nation beginning around 1905.  While still in high school he had tinkered with electrical motors and gas engines.

Norbert displayed his first motorcycle at the 1911 Chicago Motorcycle Show.  He patented the "spring fork front suspension" and the "fly wheel magneto," and his designs would help popularize the twist grip control.   A century after founding his company, Norbert Schickel was inducted into the AMA Motorcycle Hall of Fame.

In September 1919 the Schickel family sold No. 52 to Arthur Osgood Choate, a senior partner in the banking firm of Clark, Dodge & Co. and a director in the Massachusetts Fire and Marine Insurance Co.  Choate paid $70,000 for the house, just under $1 million today.

Choate drew the least amount of press coverage among his relatives.  His brother, Joseph was the ambassador to the Court of St. James; and his brother William was the founder of the Choate School.  His wife, the former Anne Hyde, was no less in the spotlight.

Anne was born in 1887 in Hyde Hall, the manor house built by her great-grandfather, George Hyde Clarke.   He was the great-grandson of George Clark, acting Colonial Governor of New York from 1734 to 1740.  Her godmother was Juliette Gordon Lowe, founder of the Girl Scouts of the United States of America.

She and Arthur married in 1907 and by now had three children, Arthur Jr., Thomas Hyde, and Anne.  The same year that the Choates moved into the former Schickel house, Anne succeeded Juliette Gordon Lowe as the Girl Scouts' second president.

The Choate country estate was in Pleasantville, New York.  The main house had been remodeled by Lawrence Grant White, son of Stanford White, in 1917.  When there, Anne took daily horseback rides, always riding sidesaddle.  She told a reporter "Much the best way; safer when you take the jumps and more elegant too."    She often invited local Girl Scout troops to camp on the estate.

When 5,000 Girl Scouts marched up Fifth Avenue on October 22, 1921, Anne Choate was in the lead, directly behind the Governor's Island Military Band.  But while Scouting was main passion, it was not her only interest.

On June 28, 1924 The Times reported "Women took the lead yesterday in a movement looking toward the selection of a 'dark horse' compromise candidate by the Democratic Convention."  Anne took charge, hosting a breakfast at the Colony Club to promote the nomination of David F. Houston, Secretary of Agriculture under Woodrow Wilson.

She was also actively involved in the Robin Hood Club which gave an annual charity ball to benefit causes like the Old Couples Fund and The New York Times Neediest Cases.

The plight of the Russian exiles under the Soviet Government in the 1920's drew Anne's concern, as well.  The Choates took a box at Carnegie Hall for the concert by the Boston Symphony Orchestra to benefit the American Society for Relief of Russian Exiles, Inc. in January 1930.  And the following year, in February, she opened the house for a lecture by Andre Kalpaschnikoff, a former Russian diplomat.  He spoke, according to The New York Times, "on the rule of the Romanoffs and the Bolshevistic campaign of Stenka Rasin on the Volga."

Entertainments at No. 52 turned to daughter Anne's introduction to society in 1936.  The major event was the supper dance at Sherry's on December 26 with a guest list of "several hundred," according to society pages.

Anne was married to Ellmore Patterson, Jr. four years later, on September 27, 1940, in what The Times called "one of the most important" weddings of the season.   The ceremony took place in St. John's Episcopal Church near the family's Pleasantville estate.

Arthur Jr. was the last to marry.  His wedding to H. Whitney Bourne on July 3, 1946, took place in the summer home of the bride's parents, Land's End, on Long Island.

Arthur and Anne Choate left New York City to live permanently on their Pleasantville estate.  Arthur died in 1963, and Anne lived on another four years, still riding sidesaddle every day until her death at the age of 80 on May 17, 1967.  She was still active in the Girl Scouts at the time.

In the meantime, No. 52 was converted to apartments in 1948--a duplex in the basement and parlor levels, and one apartment per floor above.  The names of the moneyed tenants appeared in society columns throughout the subsequent decades as births, deaths and marriages were reported. 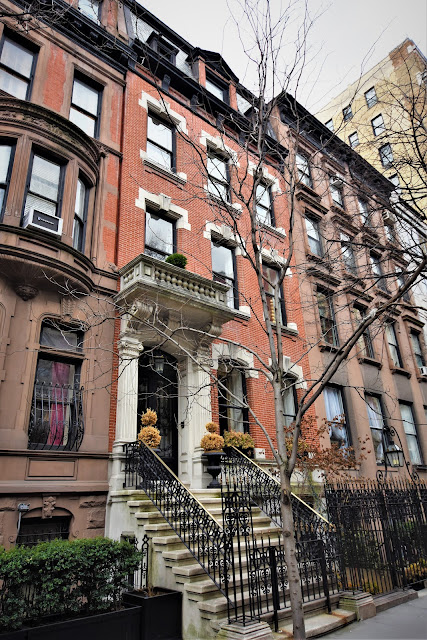 The Schickel home was returned to a single-family residence in 1998; its striking appearance little changed since its completion in 1882.