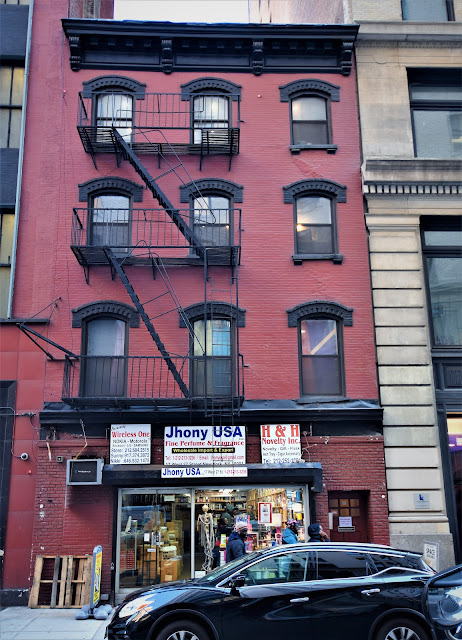 The decade before the outbreak of Civil War saw the neighborhood surrounding Madison Square fill with handsome brick-faced homes.  Among the earliest along the block of West 27th Street, between Fifth Avenue and Broadway was No. 17--a 25-foot wide townhouse in the recent Anglo-Italianate style.

The architectural style did away with the high stone stoop so expected in most rowhouses of the period.  Instead, the entrance was placed nearly at sidewalk level.  While the architect sat the window sills on small stone brackets, he cleverly executed the lintels in brick.  Given the upscale tenor of the neighborhood and the commodious size of the residence, this was almost surely a design choice and not a cost-savings step.

It does not appear that the house was ever a private home.   An advertisement on October 9, 1854 announced "No. 17 West Twenty-Seventh street, (One door west of Broadway,) has recently been opened, as a first class boarding house, by a lady who has many years experience in the business.  Rooms, single or in suites, to let, with full or partial board."

Another ad two months later noted "Gentlemen with their families or single gentlemen, can obtain good board and a pleasant home at 17 West Twenty-seventh street.  House contains all the modern improvements."

Bachelors of means depended heavily on "first-class" boarding houses.  Not only would their reputations be secure, but they were provided with home-cooked meals.  No. 17 was the sort of place where a man like the Rev. T. E. Skinner would feel at ease.

Skinner graduated from the Union Theological Seminary on May 9, 1854.  He apparently moved into the 27th Street boarding house soon after.  His comfortable financial situation was evidenced when he lost an unopened letter in October the following year.

Skinner offered a reward for return of the envelope, saying it had been lost "in Broadway, between Eighteenth and Nineteenth streets" and "probably contained a draft or certificate of deposit for one thousand dollars, to my order."  That amount would equal nearly $30,000 today.  He gave a slightly veiled warning to anyone who might consider cashing the note.  "The community are cautioned against receiving the draft or certificate without my endorsement."

The reverend was not the only boarder who had trouble holding on to things.  On October 8, 1859 an unnamed tenant offered a $1 reward for the return of a "pair of gold spectacles in a black moracco case" which he lost on 21st Street near Third Avenue.   And On May 15, 1863 an advertisement in The New York Herald note "Lost--An umbrella, in Broadway, marked Headly.  If returned to 17 West Twenty-seventh street the finder will be properly rewarded."

At the time of the lost umbrella No. 17 was owned and operated by Henry M. Schieffelin, who owned other property, including the large plot next door at the corner of Broadway.   Like all decorous boarding houses, No. 17 had rules and dinner here was served promptly at 6:00.  And like many other proprietors of such homes, the Schieffelins were rigid regarding their staff--including even their religion.  When they were looking for a new cook in 1855 they limited the candidates to "a Protestant."  The job description included "and to do a part of the washing and ironing."

In the spring of 1867 Henry Schieffelin updated No. 17 by redecorating and replacing the dated furnishings.  On Monday, April 22 that year an auction of the costly trapping which had been top of the line in the 1850's and '60's was held.   The auction announcement gave a clue to the lavish surroundings in which the boarders had lived.   Included were "rosewood parlor suits, in brocatel; rosewood marble top centre table, gilt frame mirrors, window curtains, velvet and Brussels carpets; rosewood, black walnut and mahogany bedsteads, bureaus, washstands, chairs."

Twelve days before the auction boarder H. A. Brown despaired over the loss of his dog.  He advertised "$5 reward will be paid for the return of a sleek Black and Tan Terrier, thirteen inches, weighs thirteen pounds; answered to 'Dash.'  The dog strayed or was stolen April 10 9 A.M."

In 1880 Schieffelin constructed the five-story brick building at No. 1158 Broadway, abutting No. 17.   Five years later it became the Technical School for Carriage Draftsmen and Mechanics (up to this time part of the Metropolitan Museum of Art).  Schieffelin leased both properties to the Gilsey family on May 1, 1887.  The Gilseys were well-known hoteliers who operated several hotels in the city.  The rent on the two buildings was a staggering $30,000 per year, about $800,000 today.

Decades of avoiding press coverage came to an end for No. 17 when Thomas M. Turner leased the entire second floor in 1893.  He had first garnered attention two years earlier during a scurrilous and highly publicized divorced trial.  Turner was a wealthy cotton goods merchant and a member of the exclusive Union Club.  The Sun described him as "a distinguished-looking man with a big auburn moustache."

At that time he was married to Emily T. Barnes, "one of the loveliest women in Brooklyn," according to The Sun.  The couple moved to Yonkers where they were "very intimate" friends of James M. Bloomfield and his wife, the former Martha E. Oliver.

But the intimacy of the two couples morphed into a more personal relationship between Turner and Martha.  The Evening World reported "Turner and Mrs. Bloomfield were together to such an extent that gossips began to talk."  Then, on June 7, 1890 Martha left the house, telling her husband to wait for her.  She never returned.

Newspapers were highly critical of her desertion, The Sun saying, for instance, "Mrs. Bloomfield seemed to have lost her affection for her children...and we have evidence that she left Yonkers that evening with this man Turned, and has lived with him ever since."

James Bloomfield filed for divorce.  Before the trial began Emily Turner did the same and fled to Italy to avoid the publicity.  During the proceedings Martha and Turner sat side by side while damning testimonies told of their affair.  (Included was the story of the couple's trip to the Bershire Hills with Martha disguised as a man.)   "Mrs. Bloomfield laughed and chatted with Mr. Turner, who sat at her elbow, and smiled at points in the evidence which were most damaging to her," reported The Sun on March 4, 1891.

Having lost her husband, home and children, Martha lost her paramour as well.   When he moved into No. 17 he did so without her.   And on Wednesday November 15, 1893 The Evening World ran a front-page headline which read "Turner Weds Again" and said his marriage to Maude May "caused something of a sensation among clubmen, men about town, and others."  The article reminded its readers "Mr. Turner is known better as a man about town who attained considerable notoriety a couple of years ago as correspondent in the noted Bloomfield divorce suit."

At the time the neighborhood had changed.  The entertainment district had overtaken 23rd Street and No. 17 sat squarely within what was popularly known as the Tenderloin District.  Vice within its gambling dens and saloons went unchecked as police officials grew wealthy on bribes and graft.  Among those attempting to expose the crime and corruption was investigative reporter Nellie Bly, who exposed, for instance, the illegal saloon nearby at No. 17 West 24th Street in 1891.

But her connection to No. 17 West 27th Street had nothing to do with her own investigations.  In 1895 the 31-year old reporter married the wealthy owner of the Iron Clad Manufacturing Co., Robert Seaman, who was 73.  He soon convinced himself that his young wife was cheating.

Seaman hired private detectives to spy on his wife and her supposed lovers.  One of them was James Metcalfe, who lived at No. 17 West 27th Street.  John M. Hanley's fee for "investigating the actions and conduct of one James Metcalfe" was $250, more than $7,500 in today's dollars.  Perhaps because Hanley was unable to dig up any incriminating evidence, his employer decided not to pay.

In November 1898 Hanley sued for that amount plus the other unpaid fees, amounting to $1,265 over the $1,000 retainer he had received.  Competitors to the New York World, Bly's employer, had a field day.  The Sun ran the headline "He Spied On Nellie Bly / Shadow Says Her Husband Hired Him To Do It."

The changes in the neighborhood were evidenced in 1907 when the ground floor was converted to a saloon for G. Hector Clemes and John H. O'Brien, "for many years associated with the Wilson Distilling Company," according to the New-York Tribune on March 26.  The partners' new venture fell flat, however.  A year later in July Clemes & O'Brien declared bankruptcy.

The space soon became The Old Crow Restaurant.   It was still doing business in February 1918 when restaurant owners Anrig & Agoston made a deal to combine the ground floors of No. 17 and No. 1158 Broadway.  The Sun reported Anrig & Agoston "will make extensive alterations and use the combined premises for their business."

Charles Rubin leased the upper floors of No. 17 in May the following year.  The nature of Rubin's business was not reported at the time; but it became obvious before too much longer.

On November 18, 1918 the Government had passed the temporary Wartime Prohibition Act.  It outlawed the sale of alcoholic beverages with an alcohol content of more than 1.28 percent.  The intention was to control grain consumption for the war effort.  It took effect on June 30, 1919, the month after Rubin signed his lease.

On January 13, 1920 The Sun reported that Charles Rubin and his two sons "were arrested yesterday afternoon and held on a charge of violating the war prohibition law."

The Wartime Prohibition Act was quickly following by the Volstead Act, which established permanent Prohibition.  Rubin found himself in hot water again that year.   On October 21 the New-York Tribune reported he had pleaded guilty "to selling whisky" and was sentenced to ten days' imprisonment.

By mid-century No. 17 was the last relic of the 1850's on the block.  Hemmed in by commercial buildings, it provided little hint of its high-class beginnings.  The space once home to the Old Crow Restaurant was, somewhat ironically, the Old Raven Restaurant in 1973 when it was slapped with Health Code violations.

As the district began to turn around, the ground floor became Mr. Leo's Southern Cuisine soul food restaurant by 1984, a destination spot were patrons could order cream-of-collard soup, crab cakes, spareribs and candied shrimp with macaroni and cheese.

Mr. Leo's was owned and operated by Leo Collins, who also owned a nearby disco, Club Elite, at No. 208 West 23rd Street.   On Christmas night, 1993, Collins closed up and headed to his apartment complex in the Bronx.  He was attacked and shot three times in his hallway at 4:30 a.m. in what appeared to be a botched robbery attempt.  Although he managed to crawl into his apartment and call for help, he died of his injuries.

The tragedy was the beginning of the end of the restaurant.  On March 14, 1994 New York Magazine noted "soul-food zealots made Mr. Leo their midtown haunt, though it's lost its edge, they say, since owner Leo Collins was murdered." 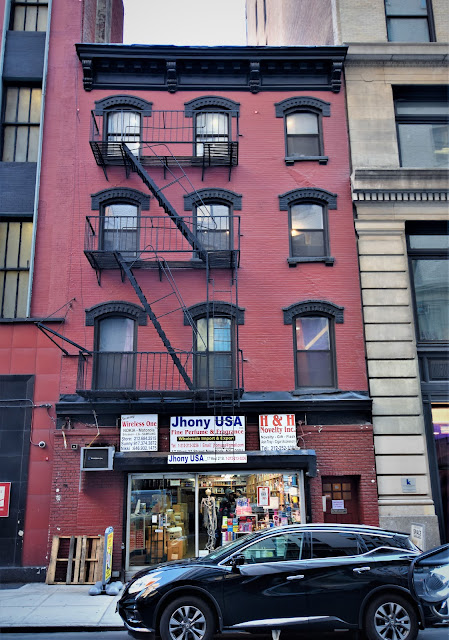 About five years later an unflattering brick veneer covered the old storefront, leaving only the old pressed cornice as a reminder.  Today a discount perfume store operates in the space.  The brick of the upper floors has been painted a barn red with black trim, successfully disguising the august beginnings of the once-proud house.