On September 18, 1866 William H. Smith's two brick stables at Nos. 518 and 520 West 22nd Street were completed.   The Superintendent of Buildings's semi-annual report listed Smith as both owner and builder.  While no architect was named, Smith may very well have filled that position as well.

The handsome structures were designed to appear as one.  Mirror images of one another, they were a utilitarian take on the Italianate style.  Wide carriage bays that sat within arched openings were graced with unexpected fan lights--an elegant touch to an industrial building near the riverfront.  Smith saved money by executing the dentiled lintels in brick rather than stone.  The peaked parapet was given a blind roundel that helped unify the design.

If Smith indeed intended his new buildings as stables, that plan seems to have quickly fallen to the wayside.  As early as May 5, 1865 an unnamed tenant was manufacturing his portable houses in No. 518.  An advertisement in The New York Herald promised they were "suitable for the oil or mining regions."

Portable houses had been around for more than a decade and were used as temporary work sheds, offices and housing in places like the oil fields of Pennsylvania and the mines of the West.  This particular endeavor may have been a side line of the oil mining firm of Wed. W. Clarke & Co.  The firm was described in the 1864 All About Petroleum as "Among the most successful managers in this business."  The booklet noted that the firm "have already centered with them the enormous capital of $34,500,000!!! of oil property and constant additions [are] being made."

At the same time that the portable houses were being made, Wed. W. Clarke & Co. erected a full-size oil well at No. 518 West 22nd Street.  In a letter to the president of the United States Sanitary Commission on April 29, 1865 the firm noted:

For the purpose of answering the great number of inquiries made daily at our office, as to the modus operandi of obtaining Petroleum, we have thought it worth while to cause to be constructed a full-sized working model of an oil well, with engine, derrick, tank, drills, and indeed all the accompaniments complete...and now on exhibition at No. 518 West Twenty-second-street, near Tenth-avenue...The Broadway and Twenty-third-street stages and the Tenth-avenue cars pass within a block, and are a pleasant substitute for a tedious journey of one thousand miles to and from the oil country.

Wed. W. Clarke & Co. charged 25 cents to see their oil well, the proceeds which were donated to the United States Sanitary Commission for its "noble care of our sick and suffering soldiers."

Portable houses continued to be made at No. 518 through the War.  By 1870 parts of both buildings had been taken over by the American Ornamental Glass Company.  The firm made the decorative glass panels used in railroad parlor cars, hotels, and oyster saloons.  An advertisement in The New York Herald on June 9, 1870 touted "Embossed glass, done on plate or double thick glass, one-third lower than regular trade prices.  Orders executed at short notice."

In the meantime, the property's owner scrambled to fill the vacant spaces.  On March 8 that year an ad offered "To Ice Dealers--To let, the premises known as 518 and 520 West Twenty-second street, near Tenth avenue, well calculated for the ice business."

It appears no ice dealers took the bait and an ad a month later read "Manufactory to let--Large, well lighted lofts, in the new Building, 520 West Twenty-second street, near Tenth avenue, calculated for a fringe and tassel manufactory or any light business."

John North ran his mechanical engineering and machinery business at No. 37 Greene Street at the time.  He not only moved his business into the combined 22nd Street buildings, he bought them.  North was not only an engineer and machinist, but an inventor.  Among his best-known inventions would be a machine for making railroad spikes, one for folding the leaves of books, and a type-setting machine.

North ran into trouble three years later as he was headed to work.  The gritty neighborhood of stables, factories and riverfront saloons was frequented by hoodlums like Edward, alias Paul, Murphy.   On the 12th of February 1873 the two would make their acquaintances.

Only a few days earlier Murphy had assaulted Charles Korn on 10th Avenue, knocking him to the pavement and robbing him "of a quantity of combs, valued at $2.80," according to The New York Herald.  Now the thug targeted John North on the same street.

North was carrying a carpet bag and Murphy approached him and "asked to carry his valise," according to The New York Times two months later.  "The complainant declined the offer, and Murphy followed him as far as Eighteenth-street, where he struck Mr. North in the face, at the same time running off with the valise."

John North took chase and, perhaps hoping to end the pursuit, Murphy tossed the carpet bag to the sidewalk.  If that was his intention, it did not work.  Murphy was arrested and appeared in court for both offenses.

A reporter from The New York Times was in the courtroom on April 9 and his headline the following day read "WARNING TO HIGHWAYMEN."   In passing sentence, Recorder Hackett alluded to the frequency and seriousness of Murphy's crimes "and said that he would show all such robbers that they would get no mercy in that court."  Murphy was sentenced to 20 years in the State Prison.

Within a few years John North moved his operation to Connecticut.  The 22nd Street building became home to the factory of the furniture and decorating firm C. H. George & Co.   The high-end manufacturer and decorator was in direct competition with society decorators like Herter Brothers and its showroom was at No. 152 Fifth Avenue.

On February 14, 1885 The Real Estate Record & Builders' Guide's column "Home Decorative Notes" said "In furniture the public taste demands reproductions of the past" and offered, "particular attention is given to specialties in drawing-room furniture by C. H. George."

Full-service decorators, the firm went so far as supplying artists who decorated the interior walls of mansions.  On August 28, 1887 a journalist from The New York Times noted "I was shown several beautiful designs for frescoing ceilings at the art rooms of C. H. George & Co., on Fifth-avenue.  They were drawings of work being done in a fashionable up-town residence...Pure art, or rather the reproduction of ancient designs, characterizes this particular branch of decoration to-day, the work being done by C. H. George & Co. bearing a high order of artistic merit.  I was also very favorably impressed with their wall papers and silk fabrics, which have been selected with rare good taste and judgment."

The importance and influence of the firm in domestic taste was evidenced when Joseph Burr Tiffany applied for work in the Fifth Avenue store as a sort of research.  A December 28, 1912 article about Tiffany in the Music Trade Review recalled that after his schooling, "he took up the study of applied arts with Tiffany & Co.  From there he went into the studio of John LaFarge to obtain a thorough knowledge of color schemes...His further desire for an intimate knowledge of the beautiful took him to the warerooms of C. H. George so that he might study stuffs and rare fabrics."

A variety of firms filled the building throughout the next decade.  In 1894 Wm. P. Hampson's brass castings factory employed 6 men who worked 57 hours during the week and 9.5 hours on Saturdays.

The Bissell Carpet Cleaner firm occupied a full floor of the combined buildings in 1895.  It was run by J. Sloane Bissell, Jr. and T. C. Burgis of whom New York, 1895 Illustrated said "These gentlemen clean and renovate carpets by means of a patented material, the invention of Mr. Bissell, and without having to take up the carpet or rug from the floor."

Not all of the cleaning was done on site, however.  The article noted that "desirable carpets are taken up and renovated at the works, while refitting and relaying are specially attended to.  The firm has done work of this kind for all the leading first-class hotels and restaurants."   Bissell Carpet Cleaner employed between 25 and 35 cleaners depending on the season.

Another tenant at the time was the St. Louis Beer Company.  The firm suffered bankruptcy in November 1896.

The wide-flung tenants continued to come and go.  In 1900 Robbins Mfg. Co. was in the building, manufacturing "disinfectants," while the Hinkle Iron Co. made decorative ironworks.  They were joined in 1903 by Frank H. Boyle & Lawton, ornamental metal makers.

The American Couch Co. was here as well.  A "Mr. Plunkett" was frank about the quality of its furniture when he told the American Cabinet Maker and Upholsterer in May 1904,  "We have a fine line, nothing better, and a nice business this year."

In 1915 William J. Kennedy Co. leased the property for 21 years.  In reporting the deal on May 1, the Real Estate Record & Builders' Guide noted "the lessee will alter the building for the manufacture of boilers and machinery."

Despite William J. Kennedy & Co.'s 21-year lease, the Anton Louy Co. took over the property in 1919.  The firm commissioned architect David M. Ach to do substantial renovations to a "reinforced concrete factory and garage."  It was most likely at this time that the western carriage bay was altered, losing its attractive arch in the process.


In 1957 the Schottland Glass Display Corp. operated from the buildings, and would remain here for around two decades.  Then in 1988 a substantial renovation resulted in an auto body repair shop on the ground floor and a foundry above.  It was most likely this renovation that removed the eastern carriage bay, transforming it into a tunnel of sorts to the rear yard.

The building experienced a renaissance of sorts in the last decade of the 20th century.  In February 1999 the Comme des Garcons boutique moved from Soho into No. 520.  The artsy trent continued when, by 1997 art dealer Pat Hearn opened her gallery here, sharing the ground floor with Paul Morris and Tom Healy's Morris-Healy Gallery.

In 2001 a renovation resulted in one apartment on the second floor and a duplex in the third floor and penthouse (hidden from view from the street).  After having moved out for a period, Comme des Garcons reopened in No. 520 in December 2013. 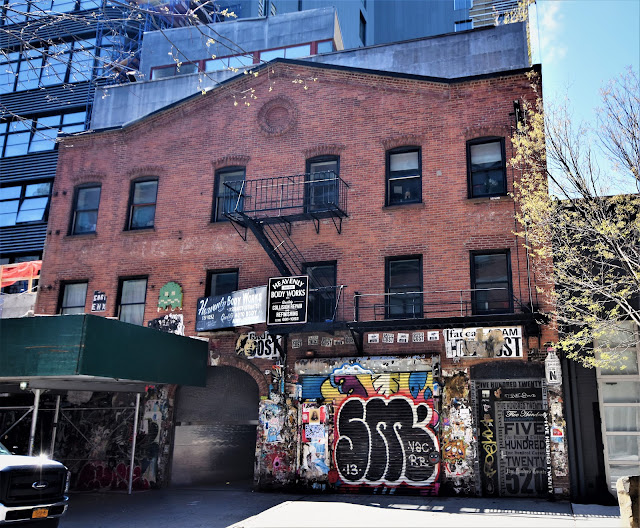 As the rampant development sparked by the Highline park overhead increasingly gives the Chelsea block a trendy, modern personality, William H. Smith's 1863 stables hangs on as a relic of a much grittier time 155 years ago.