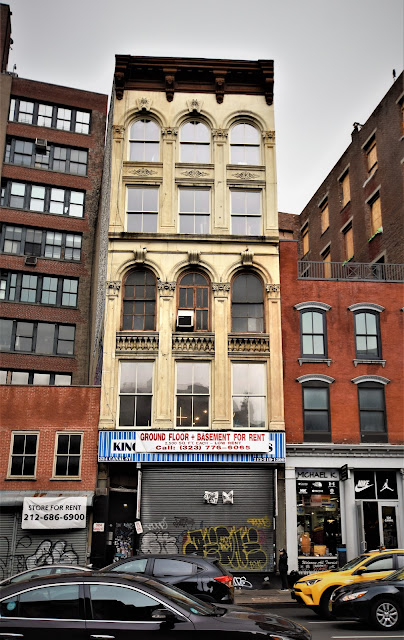 In 1863 Canal Street was a major shopping thoroughfare where emporiums like the massive Arnold, Constable & Company, known popularly as "Marble House," catered to shoppers like Mary Todd Lincoln.   That year George T. Jackson demolished the three-story former house at No. 324 Canal Street to make way for a modern store and loft building.

Jackson was a glass merchant, whose business was on Maiden Lane.  The new building was apparently an investment only, for he never moved his operation to the address.   His handsome Canal Street building was connected internally to the old structure directly behind at No. 43 Lispenard Street.  Among his first tenants was Bernstein Brothers, makers and importers of dress trimmings, who listed both addresses for the convenience of its customers.

Ira Beard was another initial tenant.  On September 28, 1866 he was robbed of $100 worth of silk ribbons from the store--a heist worth a little over $1,500.  Beard may have been disappointed when John Howe was put on trial for grand larceny on November 22, and was acquitted.

Beard would not be the last ribbon merchant to suffer thefts.  On July 21, 1874 The New York Times reported "Early on Friday morning last a gang of unknown burglars effected an entrance to the wholesale store of Libby & Riker, No. 324 Canal street, and succeeded in carrying off a quantity of silk goods and ribbons to the value of $2,500."   The robbers had broken off the outside padlock, then forced the door open with a crowbar.

The Times reported that the police had little to go on in the case.  "The robbery was not discovered until the burglars had made their escape with the goods, and the Police have thus far failed to obtain any clue to the thieves or the whereabouts of the property."

Exactly one year later an attempted burglary was thwarted entirely by chance.  Thomas Mott assumed that there would be no one in the building on Sunday morning, July 28, 1875.  He broke into the upholstery firm of F. W. Leonard & Co. on the second floor at around 8:00.  But unbeknownst to him D. B. Louden was working in his office directly above.

Hearing a noise, Louden headed down the stairs to investigate.  He ran into Mott, who fled down the stairs and onto the street.  Louden chased him, catching the attention of Police Office O'Donoghue.  Mott was arrested and held at a staggering $2,000 bail awaiting trial for burglary.

That same year Jackson tore down the old two-story building at No. 43 Lispenard Street and replaced it with a proper five-story annex to the Canal Street building.  The architect carried over the architectural motif in brick and stone in the two two-story arches, the beefy keystones and the cast iron storefront.

The new section was the scene of tragedy in the summer of 1883.  Loft buildings which did not have elevators routinely used shafts, or "hatchways," to hoist freight up and down.  Workers, often teen-aged boys, hauled crates up using heavy ropes and pulleys.  The system worked, but was dangerous.

On August 29, 1883 The Times reported "Max Strauss, aged 28 yeas, a German, fell through a hatchway at No. 43 Lispenard-street yesterday afternoon and was killed."

The building continued to house apparel and textile related firms.  A. & W. W. Shumway, dressmakers, had been in the building since, at least, 1870.  Cloak maker Jacob Herman had been here at least a decade in 1897 when he was employed five males and ten females.  State inspectors noted that minors worked 60 hours per week, plus "10 hours on Saturday or Sunday."


As the turn of the century neared, the store space on Canal Street was converted to P. Von Elm's restaurant.  In 1902 it became the Perils & Hochberg Restaurant.  The cafe was run by A. Mollenick in 1904.

In the meantime, the conditions for apparel workers upstairs were miserable.  Garment workers in the first years of the 20th century endured not only long hours, but insufferably hot conditions in the summer.  Too many shop owners cared little for the comfort or safety of their employees.

In 1905 clothing manufacturer Jacob Schinberg was directed by the Board of Health to remedying "conditions which were dangerous to life and health."  When he ignored the violation he was arrested and forced to appear before a General Sessions jury on January 11, 1906.

Recorder Goff told the jury it was "a lamentable thing...that the employees of this defendant should have been compelled to work under the horrible unsanitary and unclean conditions."  Schinberg's attorney did not dwell on the charges, but focused on the Board of Health, alleging that his client had been duped and was never informed of the violations.

The judge begrudgingly released Schinberg on the supposed technicality.  But he added that "the Board of health should not lose one moment in compelling you to remedy those conditions."

By now the fashionable shopping areas had moved northward, up Broadway and Sixth Avenue.  No. 324 Canal Street changed hands three times in 1909.  On December 4 that year owners Chas. A. Cowen & Co. leased the entire building to J. Richman & Co. and set about upgrading the aging structure.   Architect C. A. Kehoe was hired to rearrange the interior walls and install new show windows.

For the next few decades the building would continued to house garment and textile dealers.  Nearly half a century after moving in A. & W. W. Shumway was still in the building in 1917.  J. A. Richman Co., dealers in "grey dyed and bleached cotton goods," was here that year as well.

But mid-century brought a new personality to Canal Street.   The Garment District had moved north of 34th Street and Canal Street was fast becoming the center of electric goods and plastics.  In the 1950's No. 324 was home to the University General Corp., and to the Industrial Plastic Supply company in the 1960's through the 1980's.

As the 21st century dawned, Music Center, Inc. called No. 324 home.  But the years and the changes to Canal Street have not been kind.  While the battered marble-faced upper stories still exude its former elegance, the ground floor has been brutally and tragically molested.