Like so many others erecting homes in Greenwich Village at the time, master mason William Huyler intended the two story and attic house at No. 34 Leroy Street as an investment project.  Its Greek Revival elements were most likely taken from architectural style books widely available to builders.

Completed in 1845, the 18-feet wide, brick-faced house sat upon a brownstone basement.  The two-step stoop placed the entrance nearly at sidewalk level.  Attractive Greek Revival-style ironwork guarded the basement level and flanked the stoop.  While restrained, the decorative elements of the entrance--Corinthian pilasters and an egg-and-dart framed transom--were handsome touches.   The Greek Revival style had done away with the pitched roof and dormers of the earlier Federal style.  Instead the third floor attic was nearly full-height. 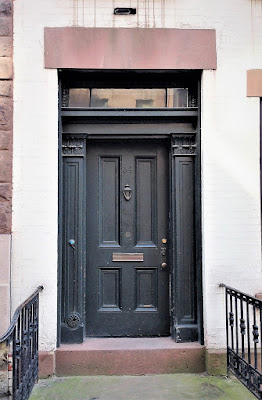 Two years after the house was completed Huyler sold it to another investor, James D. Sherwood.  He was a successful broker, and would acquire three more properties in the immediate area by 1861, including the house next door at No. 36 Leroy Street, which he built in 1853.

Sherwood leased No. 34 to William G. Babb, who remained until 1849.  Babb had previously worked for the city.  On July 13, 1831 he received a promotion from Inspector of Firewood to Street Inspector.  But by the time he moved into the Leroy Street house he had embarked on an exciting new profession.

Louis-Jacques-Mande Daguerre's invention, the daguerreotype, was introduced in France in 1839 and only recently had made its way to America.  Now portraits could be made relatively quickly.

Babb was listed as a daguerreian in 1847.   It appears that he operated his studio from the Leroy Street house, since no business address was listed until 1849.  That was the year he moved from No. 34 to 51 Leroy Street.

Rinier V. Mooney and his family next rented the house from Sherwood.  Now retired, like Babb he had worked for the City for years.  In 1826 he was listed as an Officer of the Customs, making a salary of $1,874.54 (about $47,000 today) per year.  Raises seem to have come slowly in city government work, for in 1834 his salary had not changed.  Mooney died on December 4, 1863 at the age of 70, and his funeral was held in the house two days later.

Like so many other families in the area, Sherwood's next tenants rented rooms.  An advertisement in The New York Herald on May 8, 1865 offered "A nice suite of parlors on the second floor, with bath and gas, at low figures, for one or two gentlemen, in a private House."  The restriction to "gentlemen" eliminated the possibility of immoral women bringing unwanted problems.

The roomers seem to have come and gone frequently.  The "neatly furnished rooms" were advertised again in December 1866 and again three months later.  Nevertheless, they were respectable, white collar tenants.  In 1871 Charles S. Goodrich, an attorney, was living here, and in 1883 officer worker Charles W. Gregory rented a room, as did another "clerk," Alexander McPhail, in 1888.

The private family who had rented rooms in the house were gone by 1893, when it seems that Sherwood directly leased rooms.  His ad in The Evening World on May 24 that year offered "Furnished or unfurnished single rooms or floor of three rooms and bath; newly painted; very reasonable to desirable parties."

Horton continued to rent rooms in No. 34.  The neighborhood was, by now, on the edge of New York City's Little Italy and the tenant list reflected the area's new personality.

Living here in 1911 was Gregorio Catalano, whose best friend was Dr. Gaetano Sammarelli.  Sammarelli was described by The New York Times as "a prominent Italian physician."   Both men were, said the newspaper, "well known in Italian circles."

Sammarelli and his sweetheart had been planning their wedding for some time.  Catalano was to be the doctor's best man.  In the meantime, Sammareli's fiancee had asked her best friend, Emma, to be her maid of honor.   Quite unexpectedly to all their friends, the wedding morphed into a double ceremony.  The Times said "The bridesmaid and the best man decided to emulate their best friends, and the affair was looked on as singularly auspicious."   The ceremony took place on July 27, 1911.  But the joy of the day would quickly deteriorate into misery for the brides.

Emma Catalano later said that almost immediately her new husband became cold and cruel.  Three months into the marriage he made her sign a paper which she could not read because it was written in English.  It was a legal agreement to separate and waive all claims other than a $3 per week allowance.

He told her to leave the Leroy Street house according to The Times on August 22, 1912.  "Catalano begged her to leave him, and threatened to burn the house in which they lived unless she abandoned it."

At the same time, things were not going well for the other newlyweds.   In May 1912 Dr. Sammarelli startled his friends by filing suit to annul the marriage.  "The physician alleged that his wife had never loved him and that she had refused to fulfill her marital obligations," said the newspaper.

The brides joined forces in August and hired attorney Alexander Pfeiffer (oddly enough, the same lawyer Sammarelli used).  They filed suit for "cruelty and desertion against their respective husbands and demand[ed] legal separations."

Within the decade No. 34 would return to a single-family home.  John Wilson lived here in 1927 when Arnold, Constable & Co. celebrated its 100th anniversary.  The department store celebrated by mounting an exhibition of more than 1,500 historical items.  Most of the loaned items had to do with early New York history, like the dress worn by Mrs. William K. Vanderbilt's maid of honor in her 1841 wedding.  But John Wilson lent a European relic, described as "a fan presented by Napoleon to Empress Josephine."

In was about this time that the roofline was altered with the stepped parapet.  Considering that no other changes were made to the facade, the sole attempt at modernization is puzzling.

In 1949 the house was purchased by 32-year old photographer, artist and sculptor David Meridith Hare.   By the time he bought No. 34 he had turned almost exclusively to sculpting and was recognized as a force in what would be known as the New York School.   Three years earlier art critic Clement Greenberg had said of him, "Hare stands second to no sculptor of his generation, unless it be David Smith, in potential talent."

Hare hired architect Lowel Brody to add an artist studio at the rear of the Leroy Street house in 1957.  He was now painting as well, "devoting himself to the sort of mythological and legendary subjects that were in keeping with the interests of the Surrealists and Abstract Expressionists," according to The New York Times later.  In 1977 the Guggenheim Museum exhibited a 10-year retrospective of his paintings, sculptures and drawings.

Although Hare relocated to Victor, Idaho in 1985, where he died in 1992; the Leroy Street house remained in the family, occupied by his architect son Morgan Browne Hare.  In 1995 he and partner, Marc Turckel, founded the architectural firm the Leroy Street Studio in the building.  It was joined in 1997 by Shawn Watts, who became a partner in 2005.  The well-known firm continues to operate from the nearly 175-year old house.