In 1898 the block of Fifth Avenue between 79th and 80th Streets was undeveloped.  Vacant plots still faced Central Park here as wealthy New Yorkers gradually moved northward from below 59th Street.  But activity was on the near horizon.

Simon Hunt Stern had opened his law firm on Wall Street in 1869.  After running his practice alone for three years, he took Henry Root as his partner.  The corporate lawyers represented firms like the Manhattan Company, founded by Aaron Burr as a competitor to Alexander Hamilton's Bank of New York, and the General Cigar Corporation.

By now Stern was partnered with Charles E. Rushmore in the firm of Stern & Rushmore.  Among their private clients was Samuel Clemens and Standard Oil mogul Henry Huddleston Rogers.

Stern had commissioned  Alfred John Manning to design the new home.  The English-born architect had been the partner of Robert Henderson Robertson, striking out on his own just about the time that Stern hired him.  The mansion was certainly one of Manning's earliest commissions in his private practice.

He produced an understated Beaux Arts home clad in stone and brick.  Costing $60,000 (about $1.7 million today), it rose four stories above an English basement. The rusticated parlor floor level featured arched openings, including French windows.  A frothy carved base here introduced the two-story rounded bay that supported a balustraded balcony at the fourth floor.  Above the ornate stone cornice was a handsome stone balustrade.  The Sun complimented it as an example of "the modern French school."

Simon had married his wife in 1874.  Interestingly, his bride, Sara Stern, shared his surname.  They had two sons, Henry Root and Walter Thomas.  Walter graduated from Yale University in 1899 and Henry was still a student there when the family moved into the Fifth Avenue house.  He was a member of the hockey team and chairman of the Yale Record.   Both boys would enter their father's legal practice.


The family enjoyed the lifestyle of the wealthy.  Stern's steam-powered yacht was named the Loando
and in April 1900 the New-York Tribune noted that "Captain Greenlaw is fitting out" the yacht in preparation for the Sterns' departure for Paris.

In the summer of 1906 Stern had been ill for several months.  He and Sara went to Montreal "for a few days' rest from business," according to the New-York Tribune.  It was there in their rooms at the Windsor Hotel that Simon died suddenly on October 4.   The newspaper explained that the cause of death was "the bursting of a blood vessel."

Three months later Sara sold the mansion to another lawyer, William John Curtis, for $275,000 (more than $6.8 million in today's dollars).   Before moving his family in, he brought A. J. Manning back to make what the Record & Guide described as "extensive changes."


Born in Brunswick, Maine, on August 28, 1854, Curtis had been the editor of the Daily Whig and Courier of Bangor until November 1876 when he changed course to study law.  After receiving his law degree in 1878 he moved to New York City, opening his private practice in May 1879.

Two years later he married Angeline Sturtevant Riley of Boston.   The couple would have five children, Katherine, Helen, Angeline (known affectionately as Lena), Mildred and William, Jr.   By the time the family moved into No. 986 the children were growing up.


In 1908 The Smith College Monthly reported on the movements of certain alumnae.  It mentioned "Helen V. Curtis left for Europe on the Crown Princess Cecilie on August 20.  She will be in Paris until December 1, when she will return home to 986 Fifth Avenue, New York City."

Earlier that year Mildred had gotten a new pet.  Her pedigree Airedale was named Tanglewold Rush and was registered with the American Kennel Club.

Helen was the first to marry.  Her engagement to Edward Lycurgus Taylor was announced on July 22, 1911.  The newlyweds moved into the Fifth Avenue house.


Six years later there would be two weddings in the family.  William John Curtis, Jr. had graduated from Harvard in 1916.  Now, in 1917, he was an ensign in the U.S. Navy, deployed to Cuba to quell the uprising that became known as the Sugar Intervention.  The United States occupied the island nation, but William did not let that get in the way of his love life.  On April 7 he married Caroline Knickerbocker Porter in Holy Trinity Cathedral in Havana.

That same month the United States entered another conflict--World War I.  It would result in another Curtis wedding exactly one month after William's.  On June 7 Mildred married Walter Hughson in St. Bartholomew's Church.  The Sun explained "The wedding plans have been advanced on account of the war, as Mr. Hughson has applied for a commission in the Medical Corps of the United States army."  Following the ceremony a reception was held in the Fifth Avenue house.

During the war Lena went to Europe to serve with the emergency canteen of the Red Cross.  While there she fell for a dashing Army officer.  She did not return to New York following the declaration of peace.

Instead, William and Angeloine closed No. 986 and went to Paris.  It was there, in the spring of 1921, that they announced Lena's engagement to Colonel Arthur Poillon of the United States Army.  The New York Herald, on May 6, reported "The wedding will take place in Paris, where Miss Curtis and her parents...have been for some time."

During the war Poillon had first served on the staff of Major General Tasker H. Bliss, but was transferred to the staff of Supreme Allied Commander Marshal Ferdinand Foch.  He received the Distinguished Service Cross and was decorated by the Government of France with the Legion of Honor.

With Lena properly married her parents returned to Fifth Avenue.  Although they maintained a summer home in Camden, Maine; in 1921 William purchased another country residence in Greenwich, Connecticut.  He continued his highly successful legal practice, while maintaining memberships in the University, the City, and Downtown Clubs; as well as the St. Andrews Golf Club.  He remained active in Democratic politics, and was a member of the Civil Service Reform Association.

In the fall of 1927 he and Angeline were still at their Camden home.  The 74-year old attorney contracted pneumonia and he died there on October 8.  His will dispersed the more than $3.7 million estate and included generous bequests like the $10,000 for the Captain John Curtis Memorial Library in Brunswick, Maine; and $55,000 to Bowdoin College.  His secretary, Emma P. Conner received $10,000, a generous $141,000 by today's standards; and four servants in the Fifth Avenue house each received $3,000.

Sara was well taken care of.  According to The Times, she "receives her husband's personal effects and the income from half of the residuary estate--more than $400,000--during her lifetime.

Keiser was born in Anderson, Indiana in 1852.   When he was 16 years old he got a job with a sugar dealer.  He moved to Chicago in 1878 and then to Milwaukee a few years later.  He did not arrive in New York City until 1922 at the age of 70; now a millionaire and the president of the Wall Street sugar brokerage firm George E. Keiser & Co. and the head of four sugar companies in the U.S., Cuba and Puerto Rico.  In addition, he was a director in two other related firms, the Fajardo Sugar and H. H. Camp Sugar Companies; and in the Western Brick Company and Hoosier Manufacturing Company.

He and his wife, the former Mary Camp, had two adult sons, George and David.

The Stock Market Crash two years after the elderly couple moved into the former Curtis mansion did not seriously affect their quiet lives.  Despite his age, George continued going to his Wall Street office until, on November 18, 1939, the 86-year old died in the Fifth Avenue mansion.

When the Leeds residence next door at No. 987 was sold a month later, The New York Times noted "there are persistent reports that this and some of the adjoining residential properties will in a reasonably short time provide the site for a new fifteen-story apartment building."

But, surprisingly enough, the houses survived.  Mary left New York, relocating to Winter Park, Florida, where her son George lived.  She died there on November 17, 1941.

No. 986 was converted to upscale apartments.   In 1943 Dr. Joseph M. Lubart opened his psychiatric practice in the basement.  There was one other doctor's apartment on that level, and three apartments each above.

In 1951 Geene Courtney, a television motion picture actress, lived in one of the third floor apartments.   While she had some success finding roles, appearing in the 1950 All Star Revue on television and on the George Jessel Show in 1953 for instance; she is unfortunately best remembered as the Sausage Queen, a marketing ploy devised by the Zion Meat Company during National Hot Dog Week in 1955.

Almost unbelievable, a cat burglar, 22-year old William Stone, alias William Collins, managed to scale the outside wall and enter the actress's apartment on October 27 that year.  He made off with $140 in cash and jewelry valued at $350.

Collins and his brother, 19-year old George Stone, were responsible for a string of burglaries, assaults and robberies in the neighborhood.  They were finally nabbed by detectives on November 25.  The pair was charged with a raft of crimes--burglary, felonious assault, robbery, possession of burglars' tools and illegal possession of a weapon in the commission of two crimes.

The entire blockfront survived relatively unchanged until, on January 31, 1968 The Times announced that the three old mansions at Nos. 985, 986 and 987 Fifth Avenue had been purchased by developer Bernard Spitzer.  He replaced them within the year with the 25-story 985 Fifth Avenue. 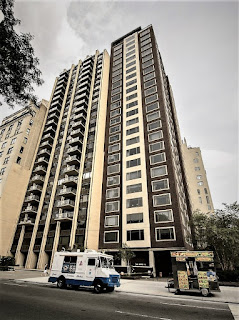