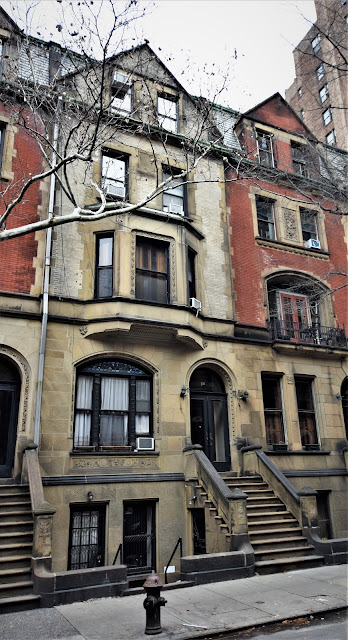 Determined to see the still mostly rocky and undeveloped Upper West Side transform into a suburb for upper and upper-middle class families, Edward C. Clark, president of the Singer Sewing Machine Company, began aggressively buying up land in the mid 1870s.  In 1877 he purchased 30 building lots on Eighth Avenue (later named Central Park West) between 72nd and 73rd Streets; and kept adding to his holdings until by 1881 he owned nearly the entire block between Eighth and Ninth (later Columbus) Avenues and 73rd to 74th Streets.

Clark had a close relationship with architect Henry Janeway Hardenbergh.   Two years after construction began on the high-end Dakota Apartment, the two set to work on another aggressive project nearby.  Hardenbergh designed 28 townhouses stretching from No. 15 to 67 West 73rd Street, between Central Park West and Columbus Avenue.   Construction was done in two phases, with the eastern group of homes completed in 1884, and Nos. 29 through 67 a year later.

Although at a glance the two sections appear the same, the first homes section were slightly wider and more costly.  Nevertheless, they flowed together as a picturesque grouping, harmonizing their architecture with that of the Dakota.

Clark retained ownership of all the houses, leasing them to well-heeled families.  No. 47 became home to Frederick Taylor and his wife, the former Louisa Josephine Walker (known as Lillie).  The couple were married in 1863.

Born in New York City on September 27, 1837, Taylor had been well educated.  He attended a private school in Flushing; then went on to Yale University.  Although te received a degree from Jefferson Medical College in Philadelphia, he never practiced.  Instead he went into business with the importing firm of Butterfield & Co. before entering the banking business with the Continental Bank.


That relationship came to an abrupt end on June 17, 1885 when he resigned after incurring the wrath of a bank director, General Horace Porter.  Taylor did not agree with some of Porter's dealings involving the West Shore Railroad.  The New York Times reported "Mr. Taylor has written a number of caustic articles exposing some of the questionable features of West Shore transactions, and thus rendered himself obnoxious to Gen. Porter."  Taylor went into business for himself, founding the banking and brokerage firm of Frederic Taylor & Co.

Interestingly, it was Taylor's adept oratory skills for which he was best known and he was highly sought after as an speaker.  The New York Times later said of him "Mr. Taylor was a frequent traveler through the West and South, keenly interested in this country's progress, and closely observant of its development, and, though a man of business, he was perhaps most widely known as a brilliant orator, of ready wit and happy humor."

That "ready wit" was best remembered following an after-dinner speech he made in Chattanooga, Tennessee on March 12, 1891.  The room was filled with important political and business figures from both the North and South; but tensions were high after an earlier speech in New York by Henry W. Grady insulted nearly "the entire Southern country," as The Times put it.

Taylor's words pacified the audience.  He said in part "there is no single fact which so fills the heart of the North with gladness as that the South has recovered from its so long prostration."  Years later The Times recalled "The speech...completely established his reputation as an after-dinner speaker."

Taylor was also, by now, the president of the Burlington, Cedar Rapids and Northern Railroad.  His memberships in the exclusive Union League and Metropolitan Clubs spoke of his wealth and social standing.

Not long after moving into the 73rd Street house, Taylor became the guardian of his orphaned niece, Caroline Taylor Jewell.  The girl had earlier been educated by her grandmother who, although an Episcopalian like the Taylors, had sent her to a Roman Catholic convent in Brooklyn for several years.  Upon her grandmother's death, she moved in with the Taylors, who had no children of their own.

The same year that Taylor made his Chattanooga speech, Caroline, now 20 years old, made a shocking revelation to her aunt and uncle.  She had decided to convert to Catholicism.   And, what's more, she announced she wanted to become a nun.

In 1882, according to The Times, "notwithstanding the efforts of her uncle and aunt and other friends to dissuade her, she entered the Convent of the Sacred Heart."   And Frederic Taylor made a trip to his lawyer's office.

On Thursday evening, February 4, 1897 Lillie and Frederic had dinner as always.  When Frederic got up from the table, he was afflicted with a severe back pain.  When it only grew worse, Lillie called a doctor.   She sent messages to close friends who hurried to the house.  The Times reported "Everything possible was done to relieve the suffering man, but without success, and he died a few minutes before 10 o'clock, within an hour of the time of his seizure."

The funeral was held in the house four days later.  The New-York Tribune reported "Floral remembrances were sent by friends in various parts of the country."  Among the mourners that afternoon were former Mayor Abram S. Hewitt, former Congressman John Henry Ketcham, two colonels, and millionaires like Francis E.Trowbridge, Henry Clews and William Earl Dodge Stokes and his wife.

Taylor's estate was worth about $7.5 million today.  His will left generous bequests to charitable organizations like the Five points House of Industry, the Working Girls' Vacation Society and the New York Ladies' Home Missionary Society, among others.   About $100,000 was to be divided among his two brothers, two nieces and two nephews.

Caroline's response was definitive.  The Connecticut newspaper the Waterbury Evening Democrat reported on December 29, 1899, "She is a Sister of Charity in the convent of the Sacred Heart in New York, and does not intent to renounce her faith."


Lillie Taylor was gone by 1906 when the Clark estate completed a long row of upscale residences directly behind her former home.  In advertising that they were available to rent, the estate noted that the caretaker of the houses could be seen at No. 47 West 73rd Street.

That arrangement was, of course, temporary, and the former Taylor residence became home to banker William Wood Struthers and his wife, Mary.  The couple was married on March 7, 1918 and nine months later, on December 28, their daughter, Mary was born.  They would eventually have three other children, Nina, Sara and William Jr.

The son of architect Robert Struthers, William had three brothers, Robert Jr., Duncan and J. Walter Wood Struthers.  Moving into the 73rd Street house with the newlyweds was  J. Walter, who was attending the U.S. Army's aviation school for civilians on Governor' Island.


Although J. Walter was a broker like his brother, with the world at war he wanted to qualify for his "military expert" license.  By now he had been making solo flights and in May started taking passengers.  On the morning of September 8, 1916 he and another student, Charles Deere Wiman, took off in a Curtis biplane with Struthers at the wheel.

About 15 minutes into their flight, at an altitude of approximately 80 feet, something went terribly wrong.  The Evening World reported "a sharp crack, as though an explosion, caused persons on the island and on Staten Island and South Brooklyn ferryboats to look up at them.

"The aeroplane, which was moving very slowly, wavered, one side drooped and then it darted to the ground in a narrow spiral, constantly gaining momentum.  Struthers could be seen yanking violently at his controls as it shot down, but he was unable to break the course of the spiral."

The biplane crashed nose-first into the ground.  "It tore a hole in the earth fifteen feet and then the whole structure, wires, frame and canvas, collapsed upon the aviators."

It took a quarter of an hour to extricate the fliers from the wreckage.  Both men were seriously hurt.  Struthers suffered two broken legs and his face was badly cut.  Wiman's wounds seemed more serious.  Along with a broken hip, he had critical internal injuries, and doctors cautioned that he "may die."


Upon receiving word, William and his father rushed to the Governor's Island hospital, taking along their own physicians and nurses to attend the men.   Ironically, it was not Wiman who perished, but Struthers.  The following month Aerial Age magazine called him "a martyr in the cause of preparedness" and commended his bravery in trying to contribute to the country's readiness for war.

When their lease was up in 1921 the Struthers family moved to Rye, New York.   The Clark estate put the house on the market, selling it in February.  The New-York Tribune reported "The buyer will occupy after making extensive alterations."

Those alterations did not extend to the facade, which was not modernized; but no doubt included arranging an office space for Dr. Elliot W. Lawrence.   A 1903 graduate of Cornell University, Lawrence was married to the former Mary Frain.   Following the death of her 59-year old mother, Margaret McDonough Frain on December 22, 1930, the funeral was held in the 73rd Street house.

The Lawrences offered their home up for the funeral of another relative, Dr. George Thomson Elliot, the following September.  He was the 76-year old uncle of Lawrence, the sister of his mother.

In 1940 the Lawrences divide their home into apartments.  The basement and parlor level now contained the doctor's office and an apartment; the second floor had one apartment, and there were two each on the upper floors.   The couple was still in the house when Dr. Lawrence died on December 29, 1963. 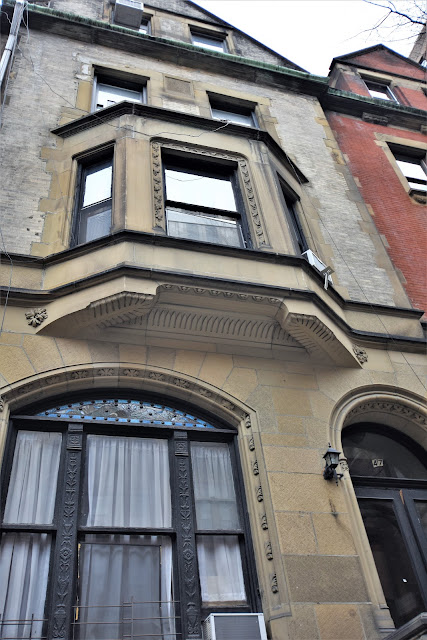 A renovation completed in 2000 resulted in a single apartment each on the lower floors, and a duplex within the fourth and newly-created penthouse, invisible from the street.