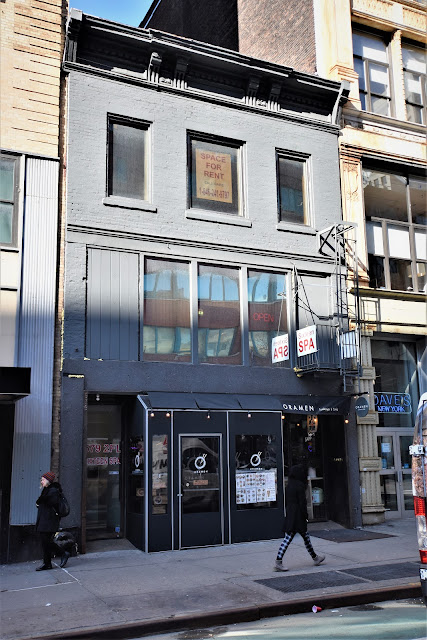 Although they were just one block to the west of the mansions of Fifth Avenue, the houses that lined Sixth Avenue between 16th and 17th Streets in the 1840s were decidedly more humble.  At No. 255 was a three-story Greek Revival house which may always have had a shop at ground level.

In the rear yard was another, smaller house.  A girl living there was looking for a job in December 1848.  Her advertisement in The New York Herald read: "Wanted--By a very respectable girl, a situation as Cook or Chambermaid, or to assist in washing and ironing.  Can give the best of city references, and can be seen for three days from 10 A.M., till 4 P.M., at 255, 6th avenue, between 16th and 17th streets, in the rear."

By 1859 the main house was home Dr. William Charles Hunter.   He was born in 1829, the son of Dr. Galen Hunter, whom The New York Times described as "a New-York physician of celebrity."  Galen Hunter had, since 1838, run a drugstore several blocks to the south, at No. 102 Sixth Avenue.  Decades later, in 1880, he would sell that business to an employee, Clarence Otis Bigelow.  Bigelow's Pharmacy would become a Greenwich Village fixture for more than a century.

William studied under his father, and then graduated from the New-York College of Physicians and Surgeons in 1857.  He followed in his father's footsteps, opening a pharmacy in the store space here.


Medications were routinely made on-site in 19th century apothecaries; a situation which caused a near disaster at No. 255 that summer.  On June 16 The New York Times reported "A fire occurred at 2 P.M. yesterday in the drug-store of Dr. W. C. Hunter, No. 255 Sixth-avenue, caused by an explosion of chemicals.  That damage was about $50, and is covered by insurance."  The damages would be equal to about $1,400 today.

William Hunter's business thrived, causing The Times to mention years later that "he soon had a lucrative practice."   Shortly after opening his drugstore he married Frances Felt.  They would never have children and continued to live above the store, despite their comfortable financial status.

Hunter wrote several papers published in medical journals, and was a member of the County Medical Society, the Academy of Medicine and the New-York Pathological Society.  An elder and trustee of the West Fourteenth-Street Scotch Presbyterian Church, he was also an officer of the Society for the Relief of the Widows and Orphans of Medical Men.

His affluence was evidenced by his ownership of several vehicles, including a carriage made by John Brewster.  Brewster paid his carriage makers the highest wages in the city and his vehicles were known for their exceptional exceptional quality.  When President Andrew Jackson shopped for a new landau in 1831, for instance, he purchased a Brewster & Co. model.

In October 1873 Hunter offered both his horse and carriage for sale.  His advertisement read "For sale--Stylish Bay Horse; also Carriage and harness; carriage by Brewster; suitable for a doctor; sold separately or together."

But the physician was not giving up his rig.  He was apparently simply trading up for a new model.  Two years later he was selling a pleasure vehicle.  "Coupe Rockaway, platform spring, strongly built, in perfect order, will be sold at a low price."

Hunter hired architect Joseph M. Dunn to update the store in the summer of 1874.  The $3,000 worth of renovations would equal a little less than $62,000 today.  They resulted in a new interior and storefront.


The pharmacist-physician began experiencing health problems around 1880.   His vision became increasingly blurry, leading to a diagnosis of rheumatic opthalmia.   In response, as reported in The New York Times, "Dr. H. D. Noyes removed part of the iris of the eye."

His condition was no doubt the reason behind his leasing the drugstore that year to E. Montanus, Jr., a graduate of the New York College of Pharmacy.   The new proprietor nevertheless continued using the well-established name of W. C. Hunter for his drugstore.

In the spring of 1885 J. W. Birdsall held the lease to the pharmacy.  His shady practices most likely upset Dr. Hunter, whose reputation and good name were still attached to the business.  On March 25 that year The New York Times reported that an undercover Board of Health agent had purchased quinine from Birdsall.   It was analyzed by Dr. Elwyn Waller who found it "showed an adulteration of 15 per cent."  The article noted "The case of Birdsall was sent to attorney and counsel for prosecution."

In the meantime, William and Frances Hunter still lived upstairs.  The doctor's health had continued to worsen.  At the time of Birdsall's legal problems, Hunter was being treated by his brother-in-law, Dr. J. W. Ranney, for Bright's disease and a weak heart.

On the evening of Saturday, September 19, 1885 he was, according to The Times, "as well as usual and cheerful when he went to bed."  When he did not get up at his usual time on Sunday morning, Frances assumed he simple needed more rest.  But eventually she attempted to wake him.  "She was greatly shocked and distressed some time after to find him dead," reported the newspaper.  "It was evident that he had passed away while she slept."  Hunter was only 56 years old.

Despite his death, the W. C. Hunter Drugstore operated under that name in the building at least through 1907.  The pharmacy had, no doubt, enjoyed the advantage of its location at the southern edge of the blocks-long row of lavish retail emporiums that would become known as the Ladies' Mile.   But by the outbreak of World War I those department stores had all abandoned Sixth Avenue, sparking a marked decline in the neighborhood.

In 1929 Sixth Avenue was renumbered and the building received its new address of No. 579.  During the Depression years it saw a rapid-fire turnover in tenants.  In 1930 it was leased to the Ervin Auction Company, in 1933 to Morris Stone, in 1934 to the Alexander Smith Contracting Corporation, and in 1937 to the G. W. Furniture Company.   At mid-century it was home to Lampland, a retail lighting store.

A renovation in 1981 resulted in office space on the upper floors and a restaurant at ground level.   Where William C. Hunter had sold tonics, now Cody's country-western club offered what Robert Palmer, writing in The New York Times on October 23 that year, called a "down home menu" and live entertainment by "country and folk singers." 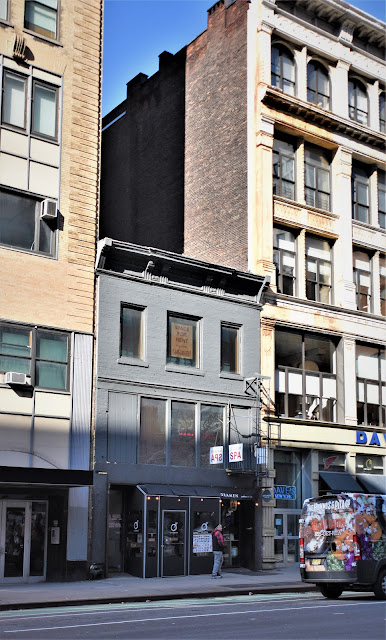 William Hunter's beleaguered little house and drugstore is painted dark gray and looks forlorn.   Squashed between commercial structures, it is the last surviving relic of the residential period of the 1840s along the block.