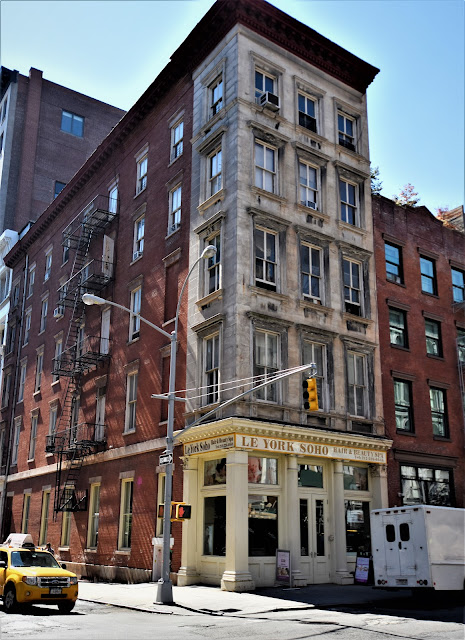 In the 1820s Broome Street (named for the first New York alderman, John Broome, who initiated the China Trade in tea) was developed with upscale brick homes.   In 1826 John Pitnard, president of the Bank for Savings in the City of New York, moved his family into the 25-foot wide house at No. 429, on the southeast corner of Crosby Street.

By the time the well-to-do commission merchant Peter Poirier purchased the residence, around 1842, commerce was inching northward toward the quiet neighborhood.  The trend prompted Euphraisme Poirier to demolish the family home in 1859 and replace it with a commercial structure.

The city clerk misspelled Poirier's name as "Posier," causing some confusion in later years.   The name of his architect has been lost; however he produced a striking marble-fronted building with a cast iron storefront.  Architrave, molded frames of the openings sat on diminutive scrolled brackets.  Their sills at the second and fifth floors ran together to create miniature stone cornices.

The Crosby Street elevation made no attempt to compete with the Broome Street's grandeur.  The no-nonsense brick facade was unadorned other than the crisp stone lintels.

Porier leased the building to brothers Joseph and Paul A. Curtis.  Their silk and dry goods business, P. A & J. Curtis & Sons, had been located at No. 38 John Street since at least 1835.  A family concern, Alfred L. and Allen S. Curtis were partners in the business.

Weber's piano factory was located on Seventh Avenue.  His choice of the Broome Street address for his showroom made good business sense.  Within the past few years the musical instrument district had moved onto the block.   In 1862 Edward A. Lauter opened his musical instrument store at No. 431 (Lauter was listed as a violin and guitar manufacturer); No. 421 was home to Lighte & Bradbury's piano-forte store in 1860; and by now C. M. Tremaine & Brothers' piano and organ showroom was at No. 435.

On March 30, 1866 Weber placed an advertisement in the New-York Daily Tribune which did not hold back in self-promotion:

The Weber Piano-Forte is called the Best Instrument Made by all the leading musicians of this city and elsewhere.  It is pronounced by the National Piano-Forte Association, after a trial in their rooms with the first manufacturers of this country, eminently the Best Piano In America, and used by the Conservatory of Music and other high music schools altogether, because of their immense power, equality, sweetness and brilliancy of tone, elastic touch, and great durability.

Weber relocated in 1869 and the ground floor space became home to the "gentlemen's furnishing store" of J. R. Elliott.  It was evidence of the changing industry in the neighborhood as millinery and apparel firms replaced musical instruments.  Upstairs were the millinery operation of T. E. Griffith and Brush Brothers's furrier shop.

Griffith's significant hat manufacturing and selling business had garnered him a substantial fortune.  But the Financial Panic of 1873 may have seriously affected his income.    That year he offered his home on the fashionable 86th Street block between Fifth and Madison Avenue for rent and put his furniture for sale.  The rent on the 12-room house was $1,200, and he asked $3,000 (nearly $60,000 today) for the furnishings.

Earlier that year Elliott closed his haberdashery.  On February 20 he offered the stock and fixtures for sale, along with the remaining two year lease.  The closing, said the ad, was "owing to illness of proprietor,"

In the meantime Brush Brothers was dealing with a problem--valuable furs were continually being slipped out of the shop starting around 1870.  Sylvester Brush took his janitor, John Rademacher, aside and asked him to help discover the culprit.  The New York Herald later explained "He had the most implicit confidence in Rademacher, and commissioned him to look out for his interests and try and detect the thief.

Rademacher embraced the assignment and ferreted out a shocking number of dishonest employees.  According to his accusations, "nearly every clerk that was engaged by Mr. Brush within the last two years was dishonest, and one after another they got their discharge," as reported by The New York Herald on April 2, 1873.

And yet the thefts continued.  On Wednesday, March 26, 1873 a bag was found hidden in an obscure part of the store.  Inside were $60 worth of furs.  The following morning it had disappeared.  Three days later Brush's son, Sylvester, found a similar bag.  Inside were $75 worth of furs,

This time Brush did not inform Rademacher; but hired a private detective, Russell D. Wiley.   That night Wiley watched from across the street while Brush locked the door.  The Herald reported "Some time afterwards he saw Rademacher return, unlock the store, go in and come out again with a bag in his hand."  Wiley followed him to the nearby home of Levi P. Ahrens at No. 327 Broome Street.  When he reappeared he no longer had the bag.

Rademacher was arrested and Ahren's home searched.  There police found 16 parcels of Brush's furs.  The treacherous employee confessed that it was he who had been spiriting furs from the shop for more than two years.  He was sentenced to three months in the penitentiary.

Ahrens's fate was more complicated.  He denied ever knowing Rademacher, supplied bail and was released.   When his case came up, his daughter appeared in court and produced a burial certificate proving he had died.  But two years later, as reported by The New York Herald, "it was found that the accused was not dead, but very much alive, being actively engaged in his old business."  He was rearrested in July 1875 and at his trial on December 7 he once again denied ever having known Rademacher.  The jury found him guilty and he was sentenced to two years and six months confinement.

By now No. 429 was home to A. S. Thorp & Co., "upholstery goods," operated by Andrew S. and James H. Thorp; Louise G. C. Hildbrandt, importer; and artificial flower and millinery trimmings importer C. H. F. Ahrens & Co.  Charles H. F. Ahrens lived in France and one has to wonder if there was any relationship between his operation and the felonious Levi P. Ahrens.

A. S. Thorp & Co. was a major manufacturer and seller of upholstery fabrics and trimmings, such as "furniture gimps."  Its block-wide factory was located at Fourth and Fifth Streets in Brooklyn.  The firm's showroom would remain at No. 429 at least through 1903,

In the meantime the building continued to see apparel and millinery firms come and go.  In 1887 C. E. Kammerer & Co, "dress trimmings," and H. & S. Davidow, wholesale dealers in clothing, were in the building.  The following year Kampmann, Hirsch & Co., manufacturers of "chenilles and ornaments" was listed here.  The company employed 5 men, 4 boys, 10 women, and 5 girls.  They worked an exhausting 50 hours per week.

In January 1890 Euphraisme Poirier hired the architectural firm of Constable Bros. to make $300 worth of interior alterations.  Four years later he was dead and his family sold the property what would amount to $2.5 million today.  (In announcing the sale The New York Times could hardly have made a more drastic misspelling of the estate's name, reporting it as "Euphrosyne Power.")

The buyer was Denis Shea who moved his long-established men's clothing store into the ground floor space.  The Poirier family did not totally abandon No. 429 Broome Street, however.  Drevet, Poirier & Poggenburg leased space in the building.  The firm listed itself as "importers of small wares and notions."  Other tenants were the American Lead Pencil Company and B. Goodman & Co., makers of "veilings."

Following the turn of the century the apparel firms like Sprintz Mfg. Co., makers of neckwear, and Kahn, Dinkelspell & Co., "lace samples," for instance, were joined by a much different type tenant, Vorhees & Roetler, toy makers.  That trend continued when George Alexander, manufacturer of combs and novelties moved in, followed by Ferdinand W. Fey, paper box dealer in 1905.

After having been in business since 1868 and in the ground floor store for more than 15 years, the Shea clothing store closed on April 18, 1908.  Denis Shea announced he was retiring.  The closing sale advertisement on April 12 promised that the entire stock of men's clothing would be sold "regardless of cost."

Denis Shea died within the year and in May 1910 the building was included in an executor's sale.  E. A. Farrell initially seemed to have gotten a bargain.  He paid $50,000 for the property, $40,000 less than Denis Shea had paid in 1894.  But something went wrong and as late as 1913 the Denis Shea Estate was still listed as the owner.

That year Charles V. Fornes leased the store for his Fornes Woolen Co.  The business would operate in the space at least through 1920.  By then the upper floors were home, mostly, to neckwear firms, including the Kisch Mfg. Co, Crescent Neckwear Co., and the Newark Neckwear Co.  By 1918 M. Bezozi & Son, maker of ladies and children's caps, had taken space.

The neighborhood continued to change and in 1938 the Medallion Wine Co. moved into the store space.  By 1941 the French Variety Products Co. was upstairs, selling a variety of products including shoe and laundry bags, cosmetic kits, "oiled silk refrigerator covers," potholders and "cuff protectors."  Within three years Triex, a precision tool shop, had moved in.

But true change would arrive in the second half of the century as the Soho neighborhood slowly changed from industrial to artistic.  In 1963 artists James Rosenquist and Ron Westerfield negotiated with the landlords for a floor each at $125 a month.  In his 2009 book Painting Below Zero: Notes on a Life in Art, Rosenquist said "At the Broome Street studio, I began experimenting with objects, including wood (Nomad), chairs (Candidate and Director), an painted Mylar and plastic sheets (Morning Sun and Nomad).

In 1968 the experimental performance club Cerebrum opened in the basement.  Designed by John Storyk, it offered a nightly "happening."  John Gruen, writing in Vogue magazine described it that year saying in part "At the door, a young man dressed in outer-space silver greets you with enormous gentleness and asks you to remove all your clothes."  After the nude patrons were given a "silken flowing toga with a hood," they were directed into a white room with "no tables and chairs.  You sit communally on heavily carpeted 'islands,' each designed to accommodate up to six persons...No one talks.  The idea is to 'experience.'"

The "psychedelic spa" with its white pillows on which to recline, kaleidoscopes and the lotions which "guides" applied to patrons' skin may have been too far out even for the artistic Soho crowd.  It closed nine months later.

The subsequent tenants were more conventional.  The Eleanore Mikus Gallery opened in 1970, for instance.  In 1995 the building was converted to artists living-working space on the upper floors, with World Farm on the ground floor and basement.

The wholesale produce dealer, however, did not operate as quietly as the art galleries and studios that were filling the block elsewhere.  Quickly the firm was hit with a $10 million lawsuit by the SoHo Alliance and 24 other plaintiffs who charged that it had turned "a sleepy neighborhood into a perilous truck depot."

A compromise was forced by Justice David B. Saxe of the State Supreme Court in December 1996.  He ordered the parties to sign an agreement by which World Farm "will work harder to keep sidewalks clear of produce and limit the amount of time its delivery trucks idle engines and block gallery windows."   The plaintiffs agreed to stop interfering with World Farm's business.  To make sure the uneasy treaty held, Saxe ordered both parties to meet with a City Hall representative every month.

The tensions ended when World Farm left the building.  In 2011 the ground floor became home to Le York Soho, a day spa.  Through it all Euphraisme Poirier's marble 1859 building survived little changed.