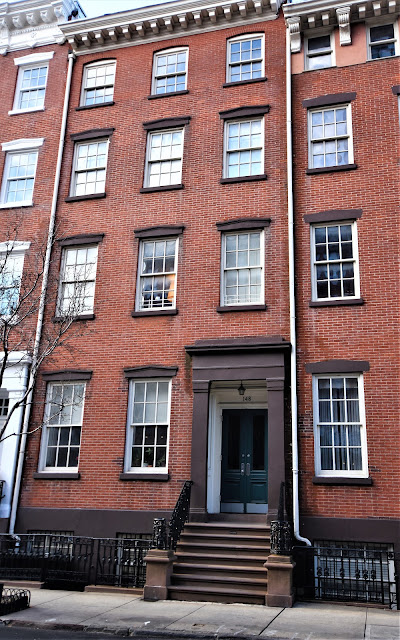 Lambert Suydam was described by The New York Times as "a descendant of [one of] the oldest Knickerbocker families."   His ancestor, Henrick Rycken (that surname later became Riker) came from Suydam, Holland, in 1665 and settled on Long Island.  His children, for some reason, took the name Suydam.

In the 1830s Lambert Suydam lived on fashionable Broome Street.  For several years Greenwich Village had experienced an astonishing building boom and in 1839 he got in on the opportunity.  He constructed a row of eight fine Greek Revival townhouses on Waverley Place, between Christopher Street and Sixth Avenue.

Sitting above a brownstone basement level, they rose three full stories plus a squat attic floor.   Handsome peaked lintels graced the openings and especially lovely ironwork spilled down the stoop to wrap the newels which sat atop brownstone pedestals.

Suydam was obviously pleased with the comfortable homes.  He moved his family into No. 158.  For several years his neighbors at No, 148 was the James Montgomery family.  Montgomery appears to have been retired by now, but his son, James, Jr. was a broker whose office was at No. 116 Water Street.

Within the next decade, it seems the residence was being operated as a high-end boarding house.  Its respectable tenants included the unmarried Susan Brennan, who taught at Primary School No. 28.

By the late 1860s No. 148 was owned by operatic composer and instructor Antonio Bagioli, who owned several other investment properties in the city.  He and his wife, Maria (known familiarly as Eliza), had been seriously upset when their 15-year old daughter, Teresa, sneaked off to marry the 33-year old Daniel Edgar Sickles in 1852.  It appears that the teen was pregnant at the time.

Although Sickles would gain prominence in the Civil War, earning the rank of General; it came after shocking scandals, including presenting a prostitute to Queen Victoria under an assumed name while his pregnant wife was left home.  More scurrilous was his fatally shooting of Philip Barton Key, the son of Francis Scott Key, in 1859 whom he suspected of having an affair with Teresa.

Baglioi died in 1871 and Eliza retained ownership of the Waverley Place house.  While boarders in the 1880s could expect a reputable place to stay, their meals were apparently not remarkable.  An advertisement in The Sun on June 16, 1884 sought a "Young woman for general housework; willing and obliging; one who understands plain cooking."

Somewhat surprisingly, given the tense family history, Eliza transferred title of the house to Sickles in May 1892.   The boarders by now were more working class, like the butcher James Gorman, who lived here that year.  And an advertisement offering rooms the following year promised no frills.  "Plain, neat, with or without board; dirt cheap."

It may have been Sickles who raised the attic to a full-height floor and added the simple bracketed cornice.   In 1894 he hired Griffin & Brother to install plumbing in the house, a significant upgrade.

At the turn of the century the tenant list included students and teachers, like Florence Bessie Boyce and George Raymond Allen, both of whom attended classes at New York University's law school; and Kate D. Johnston who taught at Public School No. 58.  They were all living in the house when Sickles sold it in March 1903.


In September that year professional boxer Frank E. Webster had shared a room here a man named Schnakenberg for a little over a week when he was arrested for a gruesome murder.  The 23-year old fought under the name of Young Ryan; however police said his real name was Edward F. McGrath.

Around September 1 he showed his roommate (who also went by the name of Johnson) a new razor he had purchased.  When he left the house a few days later, on Saturday the 5th, he took the razor with him.  He told Schnakenberg he was headed to Boston; but told his landlady that he was going to Taunton, Massachusetts.   He went to neither place.

Instead he headed to the boarding house of Mrs. Sutherland at No. 411 West 23rd Street to visit the middle-aged Benjamin M. Rose, an employee in the Simpson-Crawford Department Store.  When  McGrath returned to the Waverley Place house late on Sunday night, he was wearing a fine set of clothes.

The following morning newspapers reported the shocking discovery of Rose's body.  His throat had been slashed and defensive cuts were evidence of a violent struggle.  Even before police discovered that McGrath had been seen entering and leaving the murdered man's room, Schnakenberg had his misgivings.  He knew that the two men had known one another and, in fact, had gone to Rose's room at least once, in June, with McGrath.

Confirming his hunch, inside his roommate's new coat was a label containing Rose's name. McGrath explained that he had bumped into Rose as he boarded the train to Boston and was given the coat.  Schnakenberg suggested that he cut the label out because it was sure to raise suspicions.

It was not long before police arrived at No. 148 Waverley Place.  McGrath was wearing the clothes that belonged to the dead man.  Although he insisted that he had only met Rose one time; his story fell apart in court.  Both Mrs. Sutherland and Mrs. Bout, a servant in the 23rd Street house, testified that he "was constantly visiting the deceased."

The case became more shocking when it morphed into a tangled web of homosexuality, male prostitution, robbery and murder.   Rose was referred to in court papers as "a sexual pervert" and a "sodomite."  Testimony from various men revealed that Rose would pay up to $10 to perform oral sex on them (more than $250 in today's dollars).   And according to Officer Cahill, McGrath had grumbled as he was taken away, "You would kill him, he was no good."

Prejudice against gays reached as far as the bench in 1910.  Astounding to 21st century readers, when the jury found McGrath guilty of second degree murder on February 5, Supreme Court Justice Goff "made everybody in the Criminal Court Building gasp," according to The New York Times, when he set aside the verdict and ordered a new trial.  He declared that the verdict was "too severe."

The Times was not sympathetic with the judge, saying "it was the opinion of the greater part of those who have watched the trial that the verdict brought in yesterday was faulty in not being severe enough."  It added dramatically, "another twelve men will be chosen to review the tangled net of circumstantial evidence connecting him with the murder of Benjamin Rose, was was found in his room...lying on a heap of blood-drenched bedding."

Justice came swiftly, however.  On February 23 McGrath was convicted of first degree murder and sentenced to the electric chair.

By the time British philosopher, lecturer, novelist and poet John Cowper Powys lived on the second floor here in the early 1920s, "Waverley" had lost its second E.  By now the house was run by "Mrs. Margi," who had turned the basement to "Club Margi," a tearoom.  It was at a meeting here, on July 10, 1923 that the Greenwich Village Historical Society resolved "to erect a memorial table to mark the site of the famous Richmond Hill mansion."

Mrs. Margi's boarders were not all so respectable as John Cowper Powyes.  On August 26, 1928 26-year old Rene Dubey was one of 12 men arrested for running a gambling den in the Hotel Pennshylvania.

In 1962 the house was converted to two apartments in the basement and one each on the upper floors.  But the renovations did not put an end to tenants' criminal activity.   On August 24, 1974 Paul Proud walked into the Dry Dock Savings Bank at 59th Street and Lexington Avenue carrying a briefcase which he said was loaded with eight sticks of dynamite.

The 27-year old handed bank supervisor Howard D'Olivera a long, handwritten note demanding "all the money in the bank."  D'Olivera did not believe there were explosives in the case and coolly told Proud to wait while he procured the cash.  He slipped out of the bank and paid a cabbie $2 to flag down a police car.

Unbelievably, the would-be robber waited for 20 minutes at D'Olivera's desk before turning to see the manager outside with police.  He "became excited," according to witnesses and repeatedly threatened to blow up the bank. He kept his fingers solidly fixed on a white button on the valise.

When Lieutenant Stanley Carris, who had slipped in among patrons in plain clothes, saw Proud remove his fingers from the button, he thought he may have detonated the bomb.  He opened fire.

The Times reported "Thinking that a time device might delay any blast, he said, he put the suitcase in a corner and ran out of the building, telling everyone else to leave also."  As it turned out the "dynamite" sticks were harmless road flares.  Proud died in Roosevelt Hospital later.


In 1986 No. 148 was combined internally with No. 150--creating two apartments per floor above two basement-and-parlor level duplexes.