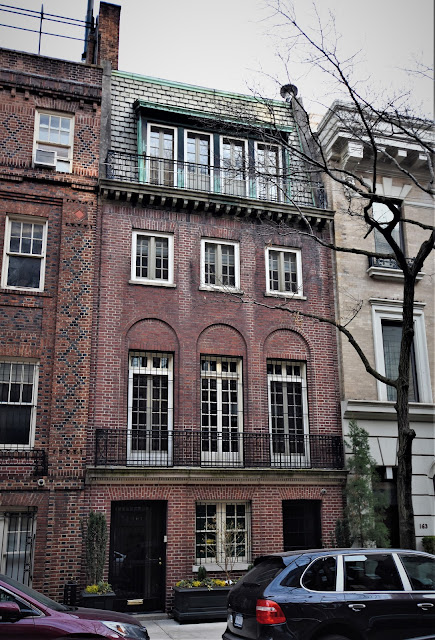 Sisters Eleanor and Marion Hague grew up the daughters of a most interesting father.  James Duncan Hague was descended from early settlers of Salem, Massachusetts, as well as from Joseph Pell, the last lord of Pelham Manor in Westchester County, "who came from a long line of English ancestors," according to historian Mitchel C. Harrison in 1902.

At the age of 18, in 1854, Duncan set off on a scientific career, entering the Lawrence Scientific School of Harvard University.  He then studied chemistry and mineralogy in Gottingen, Germany; followed by mining engineering at the Royal School of Mines at Frieberg, Saxony.  When he returned to New York in 1859, he was sent on a scientific expedition to the Pacific Island "in search of phosphatic guano or other resources."  His extraordinary career brought him world-wide recognition and in 1908 he was elected vice-president of the American Geographical Society.

Eleanor and Marion had one brother, William.  Their mother, Mary Ward Foote, was the cousin of Henry Ward Beecher.   Following their mother's death in 1898, the unmarried sisters and their father remained in the family's home at No. 108 East 40th Street.  The family summered in Stockbridge, Massachusetts, where they had maintained a residence for years.

James Duncan Hague died in the Stockbridge house on August 3, 1908.  At the time the block of East 70th Street between Lexington and Third Avenues was seeing change.  When the railroad tracks that ran down the center of Park Avenue were lowered and covered over in 1902, the neighborhoods on the "wrong side of the tracks" gradually became more fashionable.

At No. 161 East 70th Street Morris Weinstock's two-story livery stable had co-existed with brownstone rowhouses for years.  Then, on June 20, 1911 The New York Times announced "Marion and Eleanor Hague of Stockbridge, Mass., are the buyers of the stable at 161 East Seventieth Street...A dwelling will be erected on the site."

The sisters' choice of sites was a bit surprising.  The block was becoming a mixed-bag of structures.  While well-to-do buyers either razed or remodeled existing brownstones into fashionable homes; other millionaires like Julius Bache, Henri Wertheim and Daniel Reid had recently erected lavish private carriage houses just steps away from the Hague site.

The well-known architectural firm of Delano & Aldrich received the commission to design the Hague home.  The 20-foot wide house was projected to cost $20,000, a little more than $500,000 today.

Completed the following year, the four-story was faced in red brick.  It gave a nod to the currently-popular neo-Federal style in its Flemish bond brickwork, splayed brick lintels and delicate balcony ironwork at the piano nobile.  French doors opened onto the balcony, and the tall mansard was shingled in chunky slate tiles.


The sisters involved themselves in charitable activities; interestingly choosing their causes independently.   The year the women moved into the 70th Street house the Red Cross was providing relief to 150,000 refugees of the great Mississippi River Flood.  Eleanor Hague was listed among the contributors to the fund.  And when the Stockbridge summer community proposed to erect a memorial to Dr. Arthur W. Swann in 1914, it was Marian who handled the collection of donations.


The Hague women apparently inherited their father's interest in foreign lands and cultures.  On January 10, 1915 The New York Times reported "An interesting little collection of folk songs from Mexico and South America, compiled and edited by Eleanor Hague, is published...The songs were collected by Miss Hague on the spot and were sung to her by people who had inherited them."  The article noted "Miss Hague's work has been apparently conscientiously and skillfully done, in a truly scientific as well as musical spirit."

As had always been the case, the sisters rarely appeared in society pages for New York entertainments.  Instead, they entertained regularly in Stockbridge.   On September 6, 1915 The Times reported "The Misses Eleanor and Marian Hague gave a luncheon in Stockbridge on Saturday afternoon for Oswald Garrison Villard of New York, and Professor Henry W. Farnam of Yale," for instance.  And in September the following year the newspaper noted "Mrs. Eliot Sumner of New York is a guest of the Misses Marion [sic] and Eleanor Hague in Stockbridge.  Miss Mary Foote, who has been their guest, returned to New York."  (Mary Hallock Foote, a cousin, was an accomplished artist.)

In September 1919 the Hague sisters sold No. 161 to Geraldine Adee, the wealthy widow of Ernest R. Adee, who had died in their Tuxedo Park summer home, Almost Brook, in 1903.  The following month the New-York Tribune announced "Mrs. Ernest R. Adee has returned to the city from Tuxedo Park and has taken possession of her new home, 161 East Seventieth Street."

Geraldine had three children, James J., William and Geraldine Fitzgerald (her middle name came from her grandfather, General Louis Fitzgerald).  Like the Hague sisters, much of Geraldine's social prominence was centered around her summer residence.  The same year she moved into No. 161, she announced the engagement of her daughter Geraldine to Francis B. Bradley, whose family also summered in Tuxedo Park.  The wedding in St. Mary's Church there on May 29, 1920 was deemed by The Times "a brilliant social event."

Geraldine was not only socially prominent, she was fervently active in social causes.  When the First American Birth Control Conference was held in New York in 1921, she hosted a reception and tea on the afternoon of November 13.  Among her guests was sex educator and birth control pioneer Margaret Sanger.

That evening Sanger was scheduled to speak at a mass meeting at Town Hall.  Before she could take the stage, she and another speaker, Mary Winsor, were arrested.   Geraldine Adee was among the group of irate supporters who gathered in the home of Mrs. Juliet Barrett Rublee three days later, "to take action with regard to the police suppression," as described by The New York Times.   The group described the arrests as "outrageous" and declared that the action "was taken on the direction of the Roman Catholic hierarchy."

Geraldine's interests were not all so controversial.  She was involved with the Babies' Hospital of the City of New York and regularly hosted sewing classes in the 70th Street house for its benefit.

Expectedly, the Bradleys maintained a home in Tuxedo Park near Almost Brook.  Francis, who graduated from Harvard in 1919, was a member of the Tuxedo and Morris County Golf Clubs, the Sons of the Revolution and the Harvard Club.   The couple had two daughters, Barbara and Geraldine, and outwardly appeared to be a contented family.

But things went downhill when the married actress, Estelle Winwood, caught Francis's eye.  Geraldine Fitzgerald went to Paris in 1924 and obtained a divorce on August 14 on the grounds of desertion.

As the years went by Geraldine Adee shared her home with close family members.  In 1936 son James listed his address her, and the following year, on December 8, The Times reported that Geraldine had returned from Tuxedo Park to No. 161 "where her granddaughters, the Misses Barbara and Geraldine Bradley, will join her for the holidays."

On November 29, 1939 Geraldine gave a dinner dance in the Ritz-Carlton to introduce Barbara to society.  It would be among the last Manhattan entertainments she would host  Before long she moved permanently to Almost Brook, where she died at the age of 83 on May 4, 1954.

No. 161 became home to Baron and Baroness Philippe de Rothschild.  Decades later, Mitchell Owens described Pauline de Rothschild's remodeling of the home.  Writing in The New York Times on November 5, 2000 he said "At her town house at 161 East 70th Street, in the 1940s', she woke each day to a half-dozen camelia trees blooming in wooden tubs, a horticultural extravagance inspired by a lover's recollection of St. Petersburg palaces in the dead of winter, their chilly splendor scented by out-of-season flowers said to be sent by special train from the sunny south of France.  In that same house, she also installed a pair of antique polychrome Spanish doors backward, to provide a firework of reds, blues and golds each time she opened the closet."

Pauline's distant cousin, Diana Vreeland, described the "shiny smoke-gray walls" of the sitting room as "the color of the inside of a pearl."  According to Owens, the color was actually taken from an Hermes umbrella.

Those not within the Rothschilds' inner circle got a chance to glimpse inside the home in November 1960 when the couple allowed it to be converted for five days to Les Boutiques de Noel, to benefit Cancer Care Inc.  On November 14 The Times reported "The Rothschild home has been turned into a shopping center...Seventeen specialty shops from across the United States as well as the New York area have set up display booths on the first two floors of the house."

The kitchen was converted into an "English antiques shop," a maid's room became a toy and music box store, and in other rooms patrons could browse through clothing, pictures, books and kitchenware.


The Rothschilds were followed in No. 161 by composer-lyricist Frank Loesser and his second wife, actress Jo Sullivan.   The composer of popular songs like "Once in Love With Amy," "Two Sleepy People," and "On a Slow Boat to China," he wrote the music and lyrics for hit Broadway shows including Guys and Dolls, Where's Charley?, and How to Succeed in Business Without Really Trying.

Loesser contracted lung cancer in the late 1960s.  His condition worsened in the spring of 1969 Loesser, leading to his hospitalization early in July.  Four weeks after his admittance, on July 28, he succumbed to the disease.


The house erected by two wealthy sisters in 1912 remains a single family home.  The interior details have been lovingly preserved for more than a century and the reserved facade is unchanged.