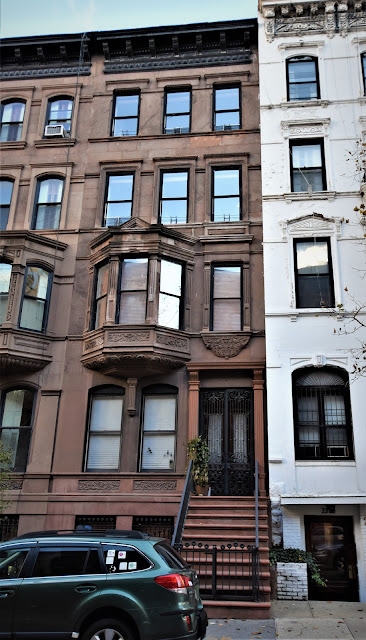 Four years after developer Philip Braender hired William Graul to design a group of speculative row houses on the south side of East 93rd Street, between Fifth and Madison Avenues, he brought the architect back to the same block.

In 1891 construction began on four four-story houses on the north side, at Nos. 15 through 21.  Completed the following year, they were designed basically as two mirror-image pairs.  Each home, nevertheless, was given its own unique elements.


The eastern-most, No. 21, featured carved Renaissance Revival panels beneath the parlor and bay windows.  A miniature, engaged column supported the angled bay, the elaborately carved base of which morphed into more formal, classical temple-like design.  The stair hall window of the second floor wore a sumptuously-carved bib of vines and flowers. 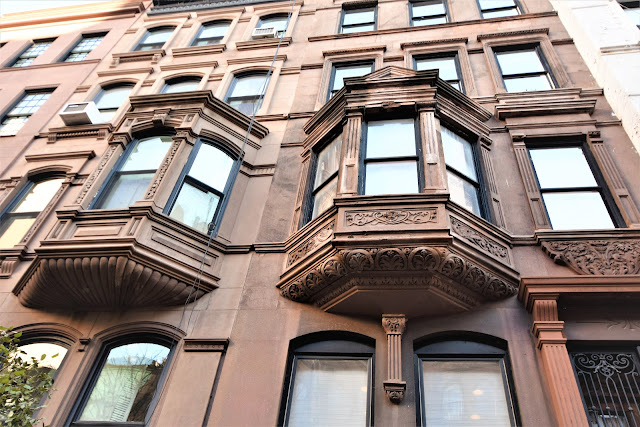 On June 18, 1892 Braender advertised "17, 19, 21 East 93d st, near 5th av--Beautiful four-story private houses; low prices; cabinet trim throughout; butler's pantry extension; strictly private neighborhood; must be examined to be appreciated."   The reason he did not include No. 15 in the offering was because he had already moved his family into that house.

No. 21 became the home of Louis Kesssel and his family.  The senior partner in the banking firm Louis Kessel & Brother, he and his wife, Josephine had one daughter, Tessie.  The family routinely summered at Long Branch, New Jersey.

While the Kessels' comfortable wealth and the enviable location of their home just steps away from the mansions of Fifth Avenue were not enough to gain them admittance into the highest strata of Manhattan society; their movements were still noticed by society columnists.   Such was the case in January 1897 when Tessie's engagement announcement shared space on the same pages that told of the lavish upcoming ball in the newly-completed Henry Sloan mansion.

Tessie's marriage to George J. August took place in the fashionable Delmonico's restaurant on January 20.  Her parents remained in the 93rd Street house for two more years, selling it in January 1899 for $33,000 (around $930,000 today) to real estate dealer Harris Levy.

Despite his advanced age, Levy had just married his third wife.  Described by The New York Times as "elderly and wealthy," his bride was portrayed as "a young woman."   But Levy's hopes of domestic bliss had not clouded his candid awareness that the intentions of his more youthful mate may not have been entirely romantic.

Before the wedding, in November 1898, he went to the office of his lawyer, Moses H. Grossman and had a pre-nuptial agreement drawn up.   It provided his fiancée, Leah, with $1,000 at the time of the wedding, gave her ownership of all the household furnishings, and another $1,000 on his death.  She signed the contract, thereby giving up any other claims to his substantial estate.

The New York Times said "The wedding ceremony took place with gay festivities accompanying."  Things started off well enough.  The Levis had one live-in servant girl and Leah later said "He gave me twelve dollars a week for eatables for the table.  The amount that was paid the servant girl was ten dollars a month."  The two summered in upscale resorts like Saratoga.

But then their domestic bliss soured.  According to Leah, Levy became jealous, calling her a "tramp" when she would go out and not return quickly enough.  And his frequent temper outbursts worsened after she sued on December 13, 1901 to negate the pre-nuptial agreement.  Her complaint said "the prospective bride did not understand what she was doing when she relinquished her rights to her husband's property, also that Mr. Levy knowingly and fraudulently concealed from her the contents of the agreement."

In one especially terrifying incident, he picked up a table knife and threatened "If you don't get out of my house, I will put a knife into you."  According to Leah, "the [servant] girl was afraid and she took me by the body and she pushed me in a near-by room."

Recognizing that the servant's loyalties were with Leah, Levi fired her.  Leah stayed in the house for about two weeks, until finally her husband took away all the keys and ordered her out of the house.  She sued for divorce in October 1903 "alleging cruel and inhuman treatment."  The New York Times added "She also says that her husband was stingy in money matters."

The next residents were far less dramatic.  Ehler Osterhold and his wife, the former Augusta Iden, had one daughter, Marie.   Census records show two servants living in the house with the family.  By 1914 the change from carriages to automobiles was well underway and Ehler purchased a shiny new Cadillac.

The following year Marie graduated from the exclusive Miss Spence's School and Augusta's focus turned to the introduction of her daughter to society.   On March 3, 1916 she gave what The New York Times deemed "a small dance" in the St. Regis Hotel  for Augusta.   The newspaper reported "Mrs. Osterholt and Miss Osterholt received in the Louis XVI reception room, and the dancing was in the marble ballroom.  A seated supper was served at 12:30 o'clock in the Oak Room."  The article estimated the number of guests at between 150 and 200.

Unlike most debutantes, Marie would not marry for another seven years.  Her understated wedding to Edward S. Gregory, who had served in World War I as a captain in the 55th Infantry, took place in the 93rd Street house on June 2, 1923.

Augusta's sisters Emma and Marie had never married.  In August 1932 Emma's funeral was held in the house; and six years later, in February 1938, the funeral of Marie was held here.  The final funeral to be conducted in the drawing room was that of Ehler Osterholt, who died at the age of 84 on January 2, 1944.

Augusta sold the home she had shared with him for decades and in 1945 it was converted to nine apartments--two per floor except for the parlor floor, which was a single apartment.   A 1982 alteration resulted in three apartments. 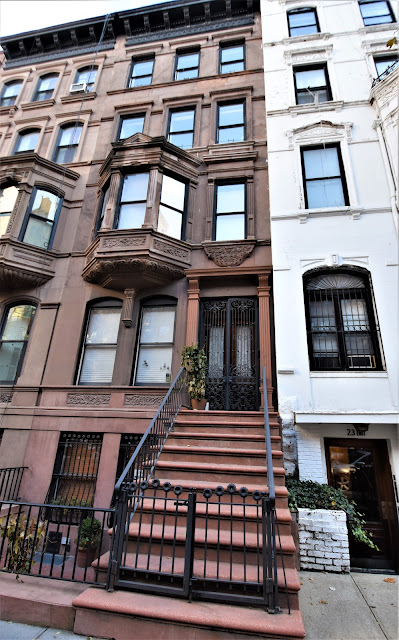 Other than replacement windows and the accompanying loss of stained glass panels, little has changed to the outward appearance of No. 21 since the Kessel family moved in in 1892.