By 1929, the West 29th Street neighborhood between Sixth and Seventh Avenues had been part of Manhattan's Fur District for years.   That year Fur Land Company, Inc. laid plans for its headquarters and wholesale store, at Nos. 155-163 West 29th Street.  But the Stock Market Crash on October 29 that year may have significantly scaled back those plans.

The firm commissioned the firm of Sugarman & Berger to design the structure.  Plans were filed on April 22, 1930 with the cost projected at $150,000, slightly over $2 million today.   Completed in March the following year, it was just three stories tall--standing in stark contrast to the soaring loft structures that had already risen along the block.

The architects sheathed the structure in white terra cotta tiles.  The offset entrance to the upper floors, wedged between storefronts, sat within an Aztec-inspired stair-stepped frame that smacked of grander examples found in buildings like the Chrysler Building.  A bandcourse of crisp zig-zags against rolling waves formed the base of the two-story grouped openings.  Here tiles gave the impression of fluting to the pilasters, which were capped by Art Deco capitals.  The pressed metal spandrals were surprisingly spartan.  A row of decorative tiles suggested a cornice. 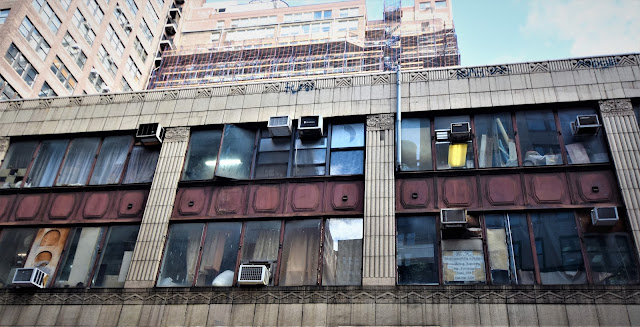 The Fur Land Company leased a portion of the new building to A. Hollander & Sons, a "dyeing and fur dressing establishment."   The firm had been founded in 1889 by Austrian-born brothers Joseph and Adolph Hollander as Hollander Brothers.   A. Hollander & Son became the world's largest fur dressers and dyers listed on the New York Stock Exchange.

According to a family member, Jane Hollander, decades later in a letter to The New York Times, "the Hollanders specialized in making cheap furs look expensive, especially mink-dyed muskrat."   The company's fur cleaning process, involving sawdust and other agents, became a household word in the 1940s, "Hollanderizing."

Not long after A. Hollander & Sons moved in, the firm suffered the loss of founder Adolph.  He died on September 29, 1932 at the age of 80.  His brother stayed on for another five years before retiring.  The company was still operating in the West 29th Street building in 1940 when he died while wintering in St. Petersburg, Florida with his wife.

The Depression dealt a severe blow to dealers in luxury goods, like furs.  Although it remained in the building, in 1934 the Fur Land Company leased it for "a discounted rent" of $24,000 a year, for ten years.  The ploy did not work and the building was lost in foreclosure.

Nevertheless, Fur Land forged on and on August 14, 1947 bought the building back from the City of New York.

The recovered economy following the end of World War II breathed new life into the fur industry.   The Fur Land Building continue to house furriers like Loran Furs, Inc., here by 1946, and National Coney Fur Institute.   But it was not the rebounded economy that could be credited for the unusual profits of Loran Furs.  Instead it was the fact that its partners, Nicholas Proscia and Max Davis, did not pay for many of the expensive goods they sold.

It all came to an end on January 25, 1950 when the FBI announced it had arrested them, along with American Express driver Thomas A. Carr.  The Bureau said the men were the "nucleus" of a "ring that over the last four years allegedly had stolen furs valued at $1,000,000."

Carr had been with American Express since 1917.  His route was within the Fur District and for years he manipulated shipping tickets and diverted shipments to Loran Furs, Inc.  American Express then paid out claims to the rightful customers or their insurance companies; but when that amount topped $1 million (more than ten times that much today), the firm brought in the FBI.

A six-month investigation pointed to Carr and he was put under surveillance.  After he delivered two marked cartons to Loran Furs, he was taken into custody outside.  Agents arrested Davis and Proscia in their offices.

The consumer's renewed ability to purchase furs resulted in high-end lifestyles for the furriers' executives.  Such was the case with Jack Posner, account representative for National Coney Fur.   He and his family live in the fashionable Eldorado Apartments at No. 300 Central Park West.   While their husbands stayed home to tend to business, well-to-do wives often went off to summer resorts or Europe.  And in 1954 Posner's wife, Margaret, and their 21-year old daughter, Elizabeth, left him behind as they sailed off to England.

The two boarded the Queen Elizabeth in Southampton on Wednesday, July 28 to return home.  The steamship stopped briefly in Cherbourg to board more passengers, then steamed on, bound for New York.  About nine hours after leaving port Elizabeth could not find her mother.

The ship's crew made what the Cunard Steamship Company said was a "fruitless search of the ship."  The Queen Elizabeth circled the area for about and hour and a half, and radioed other ships to be on the lookout for the woman.

On August 2 the ocean liner docked in New York.  Jack Posner met his daughter at the pier without her mother.


There was at least one tenant in the building at the time who was not involved in the furrier business.  In April 152 Lester Leber left the Grey Advertising Agency to form his own agency under his own name with offices at Nos. 155-163 West 29th Street.

The Fur District remained in the neighborhood through the last decades of the 20th century.  Fur wholesaler Harry Bakel was still here in the late 1960s.

Today there is little or no trace of the furrier trade on the 29th Street block.  Garish shops vie for attention at street level, the Fur Land Building being no exception.  Sugarman & Berger's streamlined storefronts are long gone, replaced with metal roll-down gates surmounted by a carnival of vinyl awnings.  But the wonder Art Deco entrance survives essentially intact along with the upper floors.