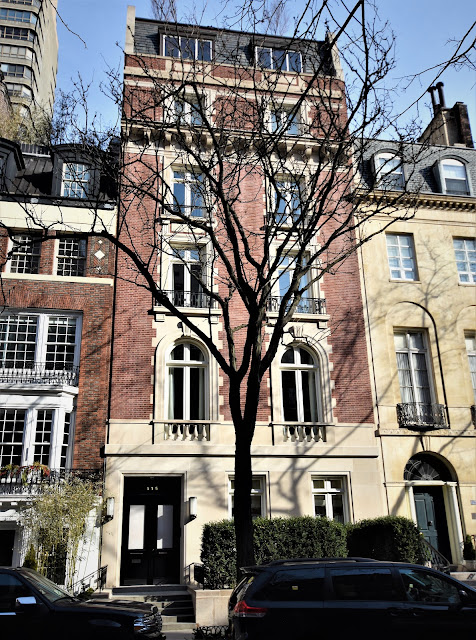 At the turn of the last century massive fortunes from silver, gold and copper were being made in the Far West.  Yet finding suitable husbands for their daughters was a challenge for the wives of those new millionaires.   East Coast socialites saw the girls as nouveau riche and uncultured.

Dennis Sheedy was one of the wealthiest men in Denver, Colorado.  His wife prepared well in advance, sending her two daughters, Florence and Marie, to cultured convent schools and taking them on extensive trips to Europe.  Starting ib 1910, as the girls reached marriageable ages, the family spent extended periods in New York City.

Marie caught the eye of millionaire Robert L. Livingston and the sweethearts were married in Denver on February 15, 1911.   Among the guests was the 36-year old bachelor, Isaiah Townsend Burden, Jr.

The Burden family had been involved in iron manufacturing since Henry Burden founded the Burden Iron Works in Troy, New York.   After Henry's death in 1871, the enormous operation was run by Isaiah's uncle, James A. Burden, and father, I. Townsend Burden, Sr.

I. Townsend Burden, Jr. was one of the most eligible bachelors in the country.  An example of his family's prodigious wealth took place in 1870.  When newly-elected President Ulysses S. Grant was to visit their Newport mansion, Fairlawn, on Bellevue Avenue, Burden, Sr. had architect Richard Morris Hunt add a ballroom to the house for the occasion.

Soon after the wedding of Robert and Marie, newspapers spread the word that I. Townsend Burden, Jr. had proposed to Florence and the wedding was to take place soon.  All involved parties flew into damage control (society engagements were not properly announced by gossip columns, but by the prospective brides' families).

Florence sent out telegrams to the periodicals saying "There is not a word of truth in the report that I am engaged to I Townsend Burden, Jr., of New York."  She expressed her family's "appreciation of Mr. Burden's courtesy in coming so far to attend my sister Marie's wedding," and even hinted "Indeed, I have good reason to believe that Mr. Burden left his heart in the East."

Burden chimed in saying "I am more than sorry that Miss Sheedy has been embarrassed by the report...She and I are the best of friends, but there is no foundation for a report that we are engaged."  And his mother insisted she had never heard of the rumor until reading it in the paper.

Protests aside, the couple was married in the Sheedy mansion in Denver on June 17.  The problem of Florence's being Catholic and her groom's being Protestant was set to rest by a four-word telegram from the Vatican.  "Holy Father blesses marriage."   The wedding gifts for two of the richest young people in the country reflected their social positions.  Three armed detectives had stood 24-hour guard for a week prior to the wedding.

The Sheedy's gave the couple a $10,000 touring car and a check for $100,000, and a $50,000 string of pearls to the bride.  The Burdens provided a silver table service valued at $35,000 (more than $875,000 today).  Other gifts included a solid gold ink stand from Mrs. Cornelius Vanderbilt, an onyx and gold clock with matching candlesticks from George Gould, and a solid gold after-dinner coffee set, four solid gold candlesticks from D. W. Cutting, and two solid silver compotiers from Mrs. William W. Sloan.

At the time of the wedding the block of East 70th Street, between Lexington and Third Avenues, had changed from one of middle-class brownstone houses and stables, to a fashionable residential enclave.  It was perhaps best exemplified a decade later when millionaire Thomas W. Lamont erected his double-wide mansion at No. 107 East 70th Street.

In April 1921 Burden purchased the two old brownstones at Nos. 113 and 115, just steps away from the Lamont house, from I. N. Phelps Stokes.  He paid a staggering $100,000 for the properties--nearly $1.4 million in today's dollars.  The New-York Tribune announced "Mr. Burden is to alter the houses into a single dwelling for his own occupancy."

But the Burdens changed their minds and demolished the old buildings.  On July 15 architect P. J. Murray filed plans for a "four-story home" to cost $75,000.   But, again, the Burdens seem to have rethought things.  When the house was completed on June 20, 1922, it had morphed to six stories.

Murray placed the brick-faced structure on a limestone base, visually grounding the tall building.  Additionally, by placing a heavy stone cornice between the fourth and fifth floors, he tricked the eye and to see a four-story house with attic floors rather than an awkwardly tall structure.

Murray's personal take on the neo-French classic style was highly appreciated by architecture critic Augusta Owen Patterson.  Writing in American Homes of To-Day in 1924, she gushed "Its success is determined largely by the perfection of its line and the exquisiteness of its ornament.  Its charm is the charm of symmetry and well considered spaces.  Its precision results in elegance.  Its reserve suggests all that one has ever known of the ritualism of French social custom."

The Burden mansion was a tempting target for "the Old Dutch House man," in 1927.  House burglar Adolph Gisterer, alias William Hauck, had been a thorn in the sides of police since the 1890s.  Police Inspector Coughlin told reporters that "in his long career [Gisterer] had stolen thousands of dollars' worth of jewelry and clothing from homes of well to do persons."

In 1922 he was sentenced to four years in prison after being convicted of burglarizing 20 homes.  Not long after his release the Burdens came home to find their bedrooms ransacked and clothing amounting to about $3,000 today missing.   On January 22, 1927 he was caught trying to climb through a small side window at Fifth Avenue and 71st Street.  He was subsequently charged not only with the Burden burglary; but a similar robbery of the home of T. J. Steinway at No. 128 East 64th Street a week earlier. 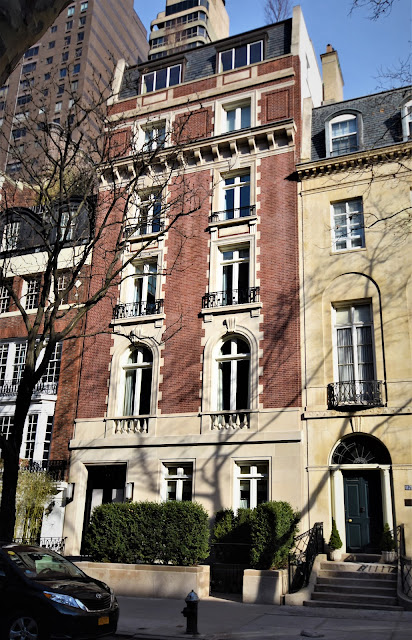 The Burdens' summers were spent, mostly, at Fairlawn, which I. Townsend had inherited from his father in 1913.  The Great Depression did not significantly affect their lifestyles, but the couple spent more time away from East 70th Street.  And on November 3, 1932 The Times announced that Mr. and Mrs. Herbert Pulitizer will return from Europe next week and will be at the Savoy-Plaza until going to their new home at 115 East Seventieth Street."  Four days earlier it had been announced the the Burdens had leased the mansion to the publisher.

The lease was a hint at things to come.  The title of the mansion was in Florence's name; so she was the owner of record when architect R. Barfort King was commissioned to transform it to apartments.  For some reason, while he preserved Murray's handsome facade, he fiddled with the top floor, changing the the neo-French classic dormers to copper-framed modern versions.

The modifications resulted in one sprawling apartment each on the ground and second floors, and two each on the floors above.  An advertisement promised that the apartments offered "the unique advantage of a Private House Neighborhood and Modern Living at the best.  The Suites have really Large Rooms, Woodburning Fireplaces and Completely Equipped Kitchens, Modern Bathrooms and unusual convenience and comfort." It added "Heated by Coal."


Among the tenants here in 1946 was theatrical producer and director Herman Shumlin.  By now he had produced and directed legendary Broadway hits like The Corn is Green, The Children's Hour, The Little Foxes, and Watch on the Rhine (he had also directed the 1943 motion picture version of Watch on the Rhine).  But Shumlin's long-standing political views placed him directly in the sights of Congress's Committee on Un-American Activities that year.

The Committee was founded in 1938 "to investigate alleged disloyalty and subversive activities on the part of private citizens, public employees, and those organizations suspected of having Communist ties."   A hysteria developed which resulted in nothing short of an Inquisition.

In March 1946 Shumlin was summoned to testify before the Committee as "a member of the executive board of the Joint Anti-Fasciest Refugee Committee."   The terrifying tactics of the group was apparent when Shumlin appeared on Thursday, April 4.

When asked to give his name and address, he said "May I have my lawyer present?"  He was told, "Give your name and address first."  Shumlin gave his name and business address.  When he was pressed for his residential address, he responded "May I have counsel present?"  The Chairman gave a disturbing response.  "I will advise you, Mr. Shumlin, if during the course of the examination there should arise any legal question that necessitates your getting legal advise before you answer it."

By 1952 Dr. Alfred V. Weisenthal and his wife lived in the building.  Born in Vienna in 1915, he was the Chief of the Department of Orthopedic Surgery at Lenox Hill Hospital.  Following his wife's death, he remained here until his own death in August 1961.

The former mansion had seen better days by the turn of the century.  Much of the interior detailing had been lost in favor of stark modernity.   That mattered little when the house was gutted by a fire in 2006.


Reed Krakoff, the former executive creative director of Coach brand, had purchased the mansion a year earlier for $17 million.  Krakoff and his wife, Delphine, a French-born interior designer, had just embarked on a renovation to return the house to a single-family home. 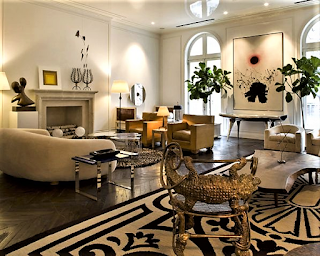 The Krakoffs forged on, installing 18th century mantels and antique floorboards imported from Europe.   The couple sold the renovated mansion in 2014 for a jaw-dropping $51 million.