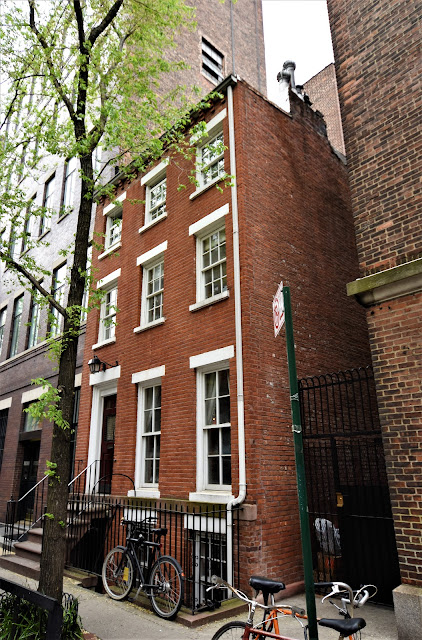 In 1845 Catherine Cruger erected two houses, Nos. 61 and 63 Barrow Street, behind her store at the southeast corner of Bedford Street.  Unlike the earlier, Federal style homes along the block, they reflected the newer Greek Revival style.  Rather than a dormered attic, they had a full-height third floor.  While intended for a middle-class family, they boasted the floor-to-ceiling parlor windows expected in the residences of more affluent homeowners.  Nevertheless, the modest personality of the homes were expressed in its simple brownstone lintels and sills.

In the 1850's No. 63 was being leased by the Taft family.  Catharine A. Taft was a teacher in the Girls' Department of Primary School No. 18 on Waverley Place near Bank Street.  And by the early 1860's the William Henry Baldwin family lived at No. 63 Barrow Street.  Born on New Year's Eve 1824, Baldwin was married to the former Mary S. Stevenson.  The couple had seven children.

At the time the Baldwins moved into the Barrow Street house, the East Coast was plagued with a deadly disease, scarlatina, better known as scarlet fever.  The epidemic was so widespread that on April 1, 1868 Dr. Shrady, editor of the New York Medical Record, noted that the Metropolitan Health Board's latest report did not even bother to count the cases.  "Nothing is said of the great number of cases of scarlet fever, as it is so common a thing that nothing is thought of it."

In the spring of 1864 the Baldwins' three year old son, Harry Lincoln, contracted the disease.  It became complicated with diphtheria and he died in the house on May 8.   Perhaps due to the infectious nature of the disease, his funeral was rapidly held the next day, just past noon, in the parlor.

The Civil War had already been raging for three years at the time.  On March 3, 1863 Congress had enacted The Enrollment Act, sometimes called the Draft Act.   All male citizens eligible for military service were required to enroll.  Their names then were included in the highly unpopular draft lotteries.  On March 17, 1865 William H. Baldwin, Jr.'s name was one of those drawn to fight in the South.

By the time the Baldwin's youngest daughter, Emily Frances, died on June 29, 1869, they had moved to No. 291 West 4th Street.  Two years earlier, the owner (possibly still Catherine Cruger) sold all three of the properties.  An advertisement in The New York Herald on February 12, 1867 offered:

The price for the houses would be equivalent to about $82,600 today.  The new owners of No. 63 Barrow Street rented rooms, but stopped short of operating a boarding house.  An advertisement in The New York Herald on December 10, 1871 offered "Furnished rooms, for housekeeping, for gentleman and wife; also small Room, for one or two gentlemen, at $2.50 per week."


The difference in accommodations were reflected in the rent.  The $2.50 per week for that small room would be around $50 today.  But an apparently more spartan "furnished sleeping room" was available for a bargain $8 per month in 1873.  The advertisements through the years were nearly identical, with only the prices slightly changing.  A bedroom and adjoining room was offered "to gentlemen or for light housekeeping" in 1874 and "also a Room to a gentleman for $2 per week."  That advertisement noted that gas was included in the rent.

As the century drew to a close, No. 63 was home to a career woman, Elizabeth A. Lahey.  She had taken a job in John Van Orden's ladies' undergarment firm in 1882 at the age of just 14 years old.  In 1890 when the forewoman, Miss Hemme, was married, Elizabeth was promoted to assistant forewoman and "special fitter."  She was promoted again in 1893 when her employer's wife, Margaret, became too ill to work.

Elizabeth was dragged into the especially ugly divorce proceedings between the Van Ordens in 1896. and was called to the stand on May 16.  Her testimony made it unclear which of the two was more at fault.

She said in part that Margaret "never had anything but bad to say about him, stating he abused her, and very often she expressed herself as though she hated him, [and] his brother Jim she called a dirty loafer.  One Monday morning she came to me and said that Mr. Van Orden had been to a vile place the night before and on disreputable business; she expressed this in a very shameful way and too low for me to repeat."

"She would come down to the workroom and talk to me by the hour about Mr. Van Orden and sometimes would tell me the most indecent things about him...While she was around I have never heard Mr. Van Orden speak to or about Mrs. Van Orden in any but a respectful manner, and invariably considerate of others."

On December 1, 1909 Elizabeth transferred title to No. 63 Barrow Street to Fanny H. von Schmid.   Fanny's purchase was an investment and she immediately leased the house to Margaret Demuth.  Fanny retained possession for nearly two decades, selling it in July 1921 to artist Estella Case.

Case was followed in the house by Edward J. Condlon and his wife, the former Rosalie M. Freeman.  A financial reporter for The New York Times since 1927, he had started his career with the New York Commercial, later working for The Boston Evening Transcript, the Chicago Journal of Commerce and The United Press.

Condlon was not all business.  He was a member of the board of governors of the New York Financial Writers Association and, according to The Times, "He was one of the leading performers in the association's annual theatrical productions in 1938, 1939 1940 and 1941."

In July 1944 Condlon became ill and he died in the New York Hospital on August 5.  It is not clear how long Rosalie Condlon remained in the house; but it as sold to Mr. and Mrs. J. F. Bagster-Collins "of Cornwall, Connecticut" in December 1959.  In reporting on the sale The New York Times noted "They will occupy it." 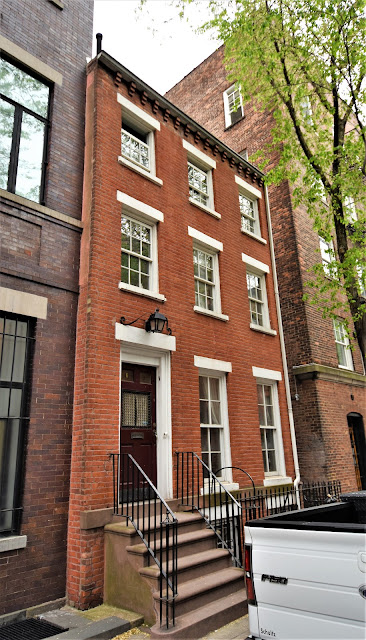 The intimate proportions of the house--just 17 feet wide--are possibly what saved the charming brick house from being divided into apartments.  Still a single-family home, its brownstone trim has been painted white and understated ironwork replaces the original railings and fencing.  Nevertheless, Catherine Cruger's investment property looks much as it did nearly 175 years ago.