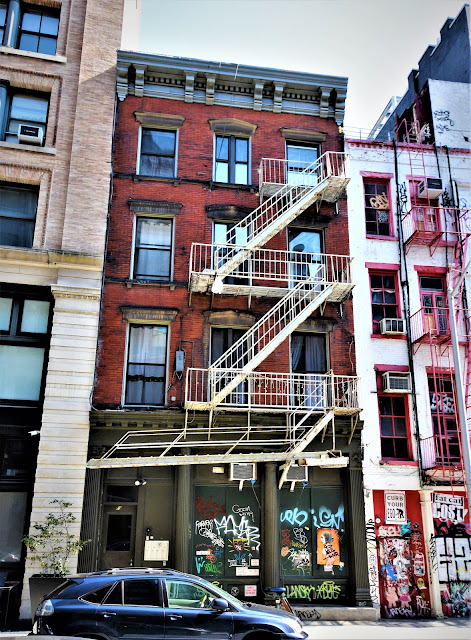 As early as 1836 the family of Charles Copping lived in the brick-faced house and store at No. 53 Lispenard Street.   A boot and shoe maker, he ran his business from the ground floor.   By the early 1860s the Copping children were grown and, while still living in the house, had found jobs.

Charles Jr. was a watchman in the Custom House in 1860 when he became involved in a gruesome murder mystery.  A few minutes before 11:00 on the frigid night of February 10 he was on his way to the barge office to report for duty.   Another Custom House guard, William S. Tuers, was walking along Broadway with a woman, their pace so slow that Copping overtook them.

Tuers asked Copping the time and commented that he did not realize it was so late.  Copping continued on to work.  Twenty-five minutes later he heard that Tuers had been discovered murdered on State Street, apparently by a blow to the back of the skull.  Newspapers tagged the case "The State-Street Murder."  The perpetrators were never found.

Charles's sisters, Helen and Annie, both were teachers in Primary School No. 44 at Moore and Varick Streets by 1863.  Both were still working there in 1865; but the end of the line for their old family home was on the near horizon.

Tully Daniel Slevin and his wife, the former Susannah Mellon ,had arrived in New York City from Ireland in December 21, 1811.  After settling first on a small farm in Pennsylvania, the family moved to Perry County, Ohio.   As early as 1839 brothers James and John Slevin had set up a dry goods store in Cincinnati, called J. & J. Slevin.

The pair prospered.  The 1850 census showed John, his wife Ann, and their six children--James, John, Charles, Alfred, Mary Louise, and twins Thomas and Edward--with a staff of five servants in their Cincinnati home.

With plans to expand the business, James moved his family to New York around 1866.  He purchased the old Copping house and hired architect William H. Hume to erect a modest commercial building.  The once quiet residential block was already seeing the encroachment of businesses.


Construction began in 1867 and was completed the following year.  Other than the cast iron storefront (manufactured by the foundry of Nichols & Billerwell), the four-story Italianate style structure appeared as much domestic as commercial.  Stone bandcourses connected the bracketed sills of the openings.  The center windows stood out with pedimented lintels.  The unpretentious structure was capped with by a handsome cast Italianate cornice.

Now known as J. & J. Slevin & Sons, the Lispenard Street operation listed a confusing tangle of Slevins as partners: James, Thomas E., John, James L. and John A.   The flourishing business would not survive very long.  In April 1872 James Slevin died.  That blow was followed by the Financial Panic of 1873--called The Great Depression until the 1929 Stock Market crash appropriated that designation--swept the country.

Thomas E. Slevin was the executor of his father's estate and in October 1873 he started selling off the family's real estate, including "the elegant residence, No. 7 West Thirty-Fourth Street," as described in the auctioneer's announcement.

The inevitable was announced in newspapers on Christmas Day, 1875.  The failure of J. & J. Slevin & Co. was lamented by The Cincinnati Enquirer, which said "Nothing could illustrate more sadly the uncertainty of mercantile affairs in these days of financial pressure and business depression."

In 1879 Jonathan Edwards contracted architect John J. Devoe, Jr. to erect a commercial building at No. 310 Canal Street.  The neo-Grec was connected internally with No. 53 Lispenard, directly behind.

Among the earliest tenants in the combined buildings was M. & C. Mayer, manufacturers of hosiery and knit goods.  Operated by brothers Max W. and Charles Mayer, the firm would remain in the building for decades before moving to Nos. 443-445 Broadway.

Michaelis Borchardt's neckwear factory was on the third floor in the mid-1880s.  Rather surprisingly, he brought his expensive wedding presents to the office for safekeeping in 1887 and placed them in the large safe.  On September 10 police were called when the safe was found broken into and its contents emptied.

The Sun reported that the store "was entered by burglars some time on Friday night and his safe, full of silk, was blown open and robbed of its contents.  It is supposed that one of the burglars secreted himself in the hall before the building was closed for the night, and let in his pals when the coast was clear."   Borchardt valued the loss of imported silk at $7,000--a significant $182,000 in today's dollars.  "His wedding presents, which were in the safe, were also taken," noted the article.

But the police were more baffled as to how the supposed crooks got away unnoticed.  The Sun said "How the burglars got away with their booty when, as the posts are short in that part of the town, policemen pass or ought to pass, the robbed building on Canal and Lispenard streets every few minutes is a mystery."

Michaelis Borchardt owed $2,500 to six creditors at the time.  Given his substantial loss in the robbery, he offered to pay each of them 25 cents on the dollar, "payable in March 1888" as reported in The Clothier and Furnisher.  His creditors, essentially with no other option, agreed.

The suspicions of police that there may not have been a burglary at all were heightened a few years later.  Borchardt abandoned the manufacture of neckties and went into the wine business.  His establishment was at the corner of Monroe and Spring Streets and was raided in 1896.  The American Stationer reported that "a large number" of bottles of wine were found to have counterfeit labels.

Borchardt offered his customers vermouth imported from Martine & Rossi of Turin, Italy.  In fact he had placed fake labels, printed by lithographer William G. Wolf on Reade Street, on bottles of cheap wine.  Both Wolf and Borchardt were charged for printing and using the "spurious labels."

In 1891 the ground floor shop on the Canal Street side housed a barber shop, while the Lispenard Street store was home to Regenard & Timmer, "dealer in woolens and tailors' trimmings."  On Sunday, April 26 the barber was just closing up when he noticed smoke coming through the wooden partition that separated the two stores.

The New York Times reported "Soon the smoke, which smelled of benzine, filled his shop.  The frightened barber ran around the corner into Lispenard Street and saw more smoke coming out of 53."  Firefighters arrived and broke open the door.  They were able to extinguish the fire; but once again investigators wondered whether this might be a home-made crime.

According to the fire department the fire "had been started in three different places under the shelves on the east side of the store.  Paper had been piled up and then set on fire."  Because the doors were locked and there was no evidence of forced entry, focus turned to the owners.  Both Capt. Stephenson of the Fifth Precinct and the members of the Fire Patrol thought the fire "was the work of an incendiary, and officers were sent in search of the proprietors of the store."

It was discovered that the contents of the store amounted to about $1,200; but was covered by about $6,000 in insurance.  Mr. Regenhard "could not conjecture how the fire started."


In 1896 the buildings were sold at auction for $45,000, about $1.3 million today.  The ground floor office on the Canal Street side became a Wells Fargo branch for years, at least through 1907.  The upper floors continued to be home to garment related firms, like Adolph Abraham, manufacturer of embroideries.

Following World War I the area saw the garment and textile industry largely leaving the district.  The building was home to S. W. Altfeld, "notions and jewelry," in the 1920s.

In May 1944 Arjay Equipment Co. advertised "A quantity of used Refrigerated Coin Operated Vending Bottle Drink Dispensers, having a capacity of 144 bottles with additional storage for 48 bottles...Sacrifice for quick sale."

In 1970 a renovation of the building resulted in a restaurant on the Canal Street ground floor and an electrical equipment repair store in the Lispenard Street store.  The upper floors were converted to office space; today they contain just four large apartments.


Then, in the fall of 2016 developers proposed to combine the buildings with No. 308 Canal and convert them to residential condominiums.  The renderings of architect Paul A. Castrucci depicted tall penthouse additions.  The Landmarks Preservation Commission rejected those plans in November, and requested reworked designs. 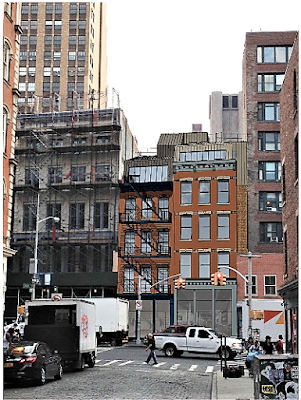