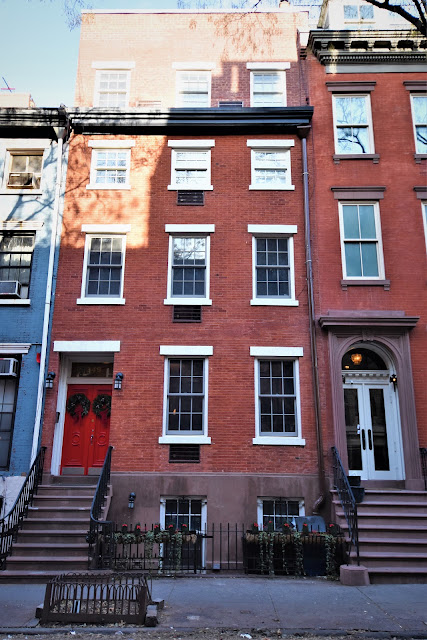 On Thursday August 10, 1843 the Board of Aldermen met.  Among the petitions it reviewed and approved was "Of P. H. Williams and others, for a Hose Company and Carriage, to be located in Twenty-sixth or Twenty-seventh street, near the Ninth avenue."  The reason Williams was eager to have a firehouse established in the rapidly developing Chelsea neighborhood became apparent four years later.

In 1847 he started construction on a three-bay wide brick house at No. 349 West 21st Street.  He was not the only Williams erecting a residence on the block at the time; so his confidence in the new neighborhood may have been shared by family members.  Completed the following year, his home was designed in the recent Greek Revival style.  Three stories tall, it featured understated brownstone trim and a high stone stoop over the English basement.  The double-doored entrance forewent the stone pilasters and entablature of the grander Greek Revival homes in the area.

Financially comfortable and apparently well respected, Williams was a director in the Brooklyn Fire Insurance Company, with offices in the Merchants Exchange Building on Wall Street.  His professional stature earned him entrance to a grisly scene on October 28, 1858.

That morning The New York Herald ran the dramatic headlines "Terrible and Appalling Tragedy / Murder Most Foul and Unnatural / Parricide, Fratricide and Suicide / A Night of Horrors."  The article began "One of the most horrible and bloody tragedies ever enacted occurred at the dwelling house No. 217 West Thirtieth street on Tuesday night.  A father, mother, two children and two female domestics, were butchered by a revengeful son, who subsequently retired to his bedroom and there ended his earthly career by blowing his brains out with a pistol."

The house was home to the family of wealthy retired lumber merchant, Francis Gouldy.  He and his wife Jane had three sons and three daughters, the eldest, Francis Jr. being 19 and the youngest, Catherine, just an infant.  The Herald called Francis "a young man of unsteady habits [who] often caused his father much annoyance in consequence of his wild and extravagant course of living."

After the teen quarreled with his father over money that night, the boy began a blood bath in the house with a large axe and a knife.  As the servants rushed to help the family, they, too, were bludgeoned to death.  Only 16-year old Mary Elizabeth survived.  Because she believed the house was invaded by burglars, she had locked her bedrooms door and screamed out the window "Murder! Murder!" catching the attention of two policemen.

They broke in the front door to find the horrific scene of dead or dying victims.  Francis, realizing he was trapped, fled to his bedroom and shot himself.

By the time the coroners arrived the following morning, word had spread throughout the city.  The Herald reported "the street in front of the house was crowded to suffocation with an eager and exited throng...All sorts of means were resorted to by the spectators with a view of gaining admittance to the house, but as a general rule few persons were admitted who had not some legitimate business within."

Among those allowed in was P. H. Williams, who along with six other men, were appointed on the spot as the on-site coroner's jury.  The inquest was held in the basement and the men heard the testimonies of the surviving victim (Jane), doctors and neighbors.

By 1868 No. 349 was home to the Curry family.  Young and unmarried, Sarah Curry was a teacher in the boys' department of School No. 35, on 13th Street near Sixth Avenue.

The block continued to be fashionable enough that most families employed, if not a small staff of servants, at least one girl.  The owners of No. 349 were seeking help in January 1873.  An advertisement in The New York Herald read "Wanted--In a small private family a girl about 14 years of age, to make herself generally useful; wages moderate and an excellent home; must come well recommended."

Most of the girls who answered that ad were, quite likely, immigrants from Ireland.  Mary O'Malley landed a job with the family not long after; but her unfortunate circumstances spiraled out of control.

On August 15, 1879 The Times reported "Mary O'Malley, a servant employed at No. 349 West Twenty-first-street, who has been drinking to excess of late, attempted to commit suicide yesterday by taking Paris green."  The highly-toxic powder was used to kill rats and mice.  She was taken to New-York Hospital, but her chances of recovery were not good.

As the turn of the century neared, the house was owned by James T. and Eleanor S. Wright.  Off-site landlords, they leased the house to respectable occupants for years.  In 1898 James A. Trowbridge signed a 1 year lease at $1,200, or a little over $2700 per month today.

In 1915 No. 349 was home to the architect Hugh J. Campbell.   He established his office in the house as well.  Because Campbell's expertise was in engineering he did not design structures, but focused on alterations and improvements of existing buildings.

Change to the 21st Street block was evident in the Depression years.  In 1939 No. 349 was no longer a private home, but a warren of furnished rooms.   It would be decades before things got better on the Chelsea block.

In 1952 the Mendez family lived at No. 349.  Their son, 17-year old Pedro, worked as a machine operator.  On the afternoon of July 1 that year he was playing dice with four other teens outside a bar and grill at No. 294 Eighth Avenue, near 25th Street.  They were making so much noise that one of the owners, Harry Oransky, sent a janitor out to disperse them.

The confrontation resulted in a shouting match, prompting Oransky went out to take matters into his own hands.  Mendez responded by producing a screwdriver and attacking the 54-year old, plunging the instrument into his temple.  Mendez then escaped on his bicycle.

Ironically, Oransky and his family, who lived in the Chelsea Hotel nearby, had been under police protection.  His daughter was married to gangster Harry Gross, recently convicted of bookmaking.  While he lived in fear of a mob hit, it was the teen-aged Puerto Rican who ended his life.

Pedro Mendez was apprehended and stood trial for first-degree manslaughter in January 1954.  He was convicted by an all-male jury and on February 10 was sentenced to "an indefinite term in Elmira Reformatory."  The New York Times noted "Mendez could be kept in prison up to twenty years." 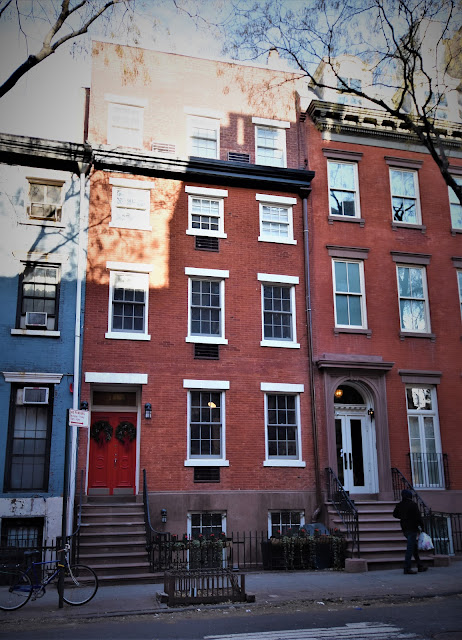 Change came to No. 349 West 21st Street in 1969 when a renovation resulted in one apartment per story, with a duplex in the third and newly-added fourth floor.  The architect laudably copied the vintage openings in the addition.  Nevertheless its high visibility from street level upsets the proportions of the structure and appears as an awkward add-on.

photographs by the author
Posted by Tom Miller at 1:59 AM