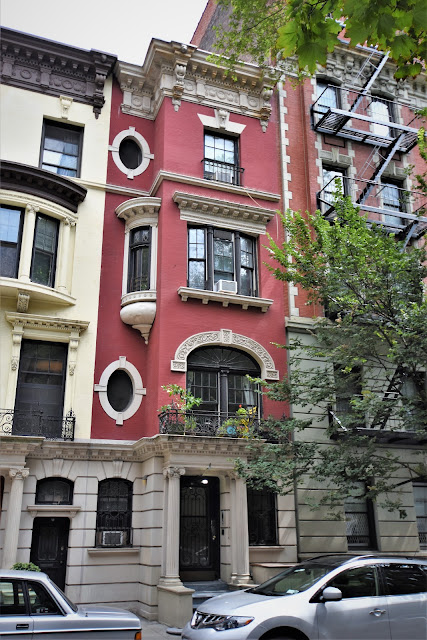 The district once known as Bloomingdale had changed from a quiet village surrounded by farms at the time of the Revolution to a developing urban suburb a century later.  In 1900 builders and developers Egan & Hallecy were a part of that transformation.  They had commissioned the architectural firm of Neville & Bagge several times for speculative projects.  Now they hired the architects to design six upscale townhouses on the north side of West 101st Street, between Broadway and West End Avenue.

Completed in 1901, they were a balanced row of three designs in an A-B-C-C-B-A plan.  Nos. 245 and 255, at either end, were mirror images and by far the most fanciful of the row.  The entrances within the rusticated stone bases sat above a shallow porch.  The formal, elegant porticoes, upheld by classical columns with Scamozzi capitals, would have been at home in London's Mayfair district.

While the houses in between were rigidly symmetrical, the architects gave the end residences romantic personalities.  A full-height bay projected forward from the rest of the row and featured a wide, arched opening at the second floor with an ornate Renaissance style eyebrow and delicate fanlight; a tripartite, and an angled bay at the third floor with bracketed cornice and sill.  Most eye-catching were the storybook elements to the side--stone-framed oculi in the staircase hall and a Rapunzel-ready quarter-round oriel.

The couple summered in Long Branch, New Jersey.  Their entertaining was not grand and their names rarely appeared in the newspapers.  Not until 1909.

Bush was an insurance agent for the New York Life Insurance Company.  He and his fellow agents were required to sell $50,000 per year in policies in order to retain his membership in NYLIC, the association of New York Life agents.  As 1908 drew to a close, Bush needed $7,000 to meet his quota.  The $25,000 policy he presented to his boss in December, along with a certified check for the premium, more than satisfied that.

But, according to the New-York Tribune, "the company refused to accept this business on the ground that it had written in that year all the insurance business it legally could."  (The "Armstrong Law" limited insurance companies to sell more than $150,000,000 in any given calendar year.)   Therefore, Bush failed to meet his quota and lost his membership in NYLIC.

Nevertheless, the damaged may have been done.  In April 1910 the Bushes sold No. 245 to Walter Thomas Kohn and his wife, the former Elsie Bloch.  The couple had been married just three years earlier, and would have three children: Peter, Walter Arnold and Marjorie.

An attorney and member of Weschler & Kohn, he was also an officer in the Regal Drug Co. and the Dean Holding Co., and a director in several corporations and banks.  When his father, Arnold Kohn, founded the North American Bank in 1911, he added one more directorship to his resume.

The winter season of 1911-12 was the year of Dorothy Kohn's debut into society.  Walter's niece, she had been a bridesmaid at his and Elsie's wedding.  On February 9, 1912 the Kohns gave "a dinner dance for young people" in the house for her.

Walter was one of New York's most visible attorneys, defending highly publicized cases.  One of these involved Nicholas Riabouchinsky, described by The Sun on May 19, 1916 as "a member of one of the oldest and wealthiest families in Russia."

Riabouchinsky arrived in New York on October 28, 1915, sent by the Russian Government to negotiate the construction of munitions plants at home.  He was authorized to spend $20 million.  But not all his spending had to do with the military project.

Described as "a stalwart, heavily bearded man with the mannerisms of a Frenchman," he was well known internationally as a connoisseur and collector of old masters.  He brought with him 30 paintings from his collection to sell in New York.  One, Sodoma's "Holy Family With St. John," sold for $31,850.


But trouble came when the Russian nobleman got involved with Timothy J. McKenna, who operated a gambling den.  Riabouchinsky's luck was not as strong as his love of the roulette and he racked up a debt of $45,000--more than $1 million in today's dollars.   McKenna sued, and Riabouchinsky hired Kohn to defend him.

Both men were understandably reticent to provide self-incriminating details.  The Sun noted that McKenna's "name, habitat and business are not revealed in the papers" and that Riabouchinsky denied any debts.

Kohn declared in court that "We don't...deny that there was a game;" but defended his client on an early version of diplomatic immunity.   The Sun reported "The sum and substance of Riabouchinsky's answer is that he does not owe McKenna any money in the first place, and that even if he does he is not obliged to pay it."

(In an interesting side note, Riabouchinsky and his 21-year old wife defected to New York City just before the Russian Revolution, a move that might explain the 15 trunks of artwork he had liquidated earlier.  The nightlife-loving millionaire spent his time on Broadway, lavishing showgirls with gifts and flowers.  Eventually his wife, who was "lavishly entertained by society," according to The Daily Missouilian, and deemed by artist Arnold Genthe "the most beautiful woman in the world," had enough.  They were divorced in 1917.)

The Kohns enjoyed the lifestyle of the upper middle class.  On January 5, 1920 they advertised for two servants, a "chambermaid-waitress" and a "laundress-chambermaid."  The combination of duties implied in the job titles separated the Kohn household from the wealthier upper class, where servants' responsibilities were more specific.

Around the time of the Stock Market crash the Kohns sold No. 245 to Dr. John Block and his wife, the former Rose Boorstein.  The couple had two children, Arnold (who also became a doctor) and Helen.   John converted a portion of the ground floor to his office.

Following his death in the house on October 29, 1937, the upper floors were converted to one apartment per floor.

Helen was by now married to Naphtali Lewis.  Both educators, they had recently returned from several years in Europe and moved into the 101st Street house. She was an instructor in psychology at Brooklyn College and he taught classical language at the City University of New York.   When their first child was born in 1942 Helen stopped teaching.  But her attendance at union meetings before then caught the attention of Senator Joseph McCarthy in 1953.


Both Helen and Naphtali were summoned to testify at the McCarthy Senate hearings on un-American activities.  Helen refused to testify, invoking her Fifth Amendment rights.  Naphtali was grilled in two public sessions, on June 10 and 19, 1953.  Earlier that year he had received a Fulbright scholarship to study ancient manuscripts in Florence, Italy.   But McCarthy was displeased with Helen's refusal to cooperate.

When Naphtali took the stand McCarthy announced "Dr. Lewis, we have just been notified by the State Department that your job in Italy has been canceled; that you are not being sent there.  I think that is an excellent idea."

In a written response, Lewis said in part "This inquisition, if it has its way, establishes a novel and singularly un-American principle; namely that before a man is permitted to pursue a career of research--even in ancient manuscripts--he must have the stamp of approval of a congressional subcommittee on himself and his family."

Dr. Naphtali Lewis would go on to become an internationally-recognized expert in papyrus manuscripts, an author of several important texts, and sought-after lecturer.   Helen, who also held a doctorate, was a distinguished psychologist and psychoanalyst.

In the meantime, in 1946 the doctor's office installed by John Block was eliminated and converted to an apartment.  The building now had one apartment per floor, as it does today.

The 1901 row of handsome homes has suffered some abuse as the days of chambermaids and laundresses gave way to apartments and furnished rooms.  But No. 245, under its unnecessary coat of red paint, retains its fanciful charm and remarkable history.