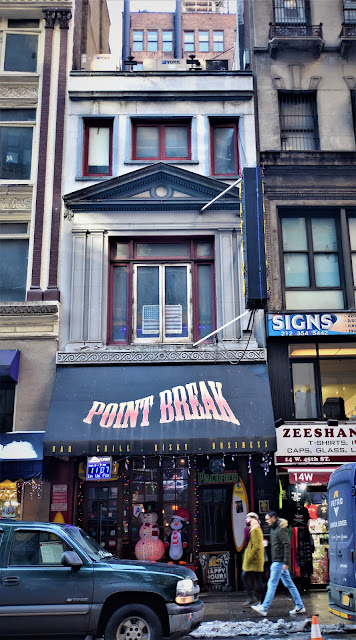 In the decade before the outbreak of World War I the old houses along the block of West 45th Street, between Fifth and Sixth Avenues, were disappearing one by one.  In December 1910 developer James A. Farley bought Mary G. Duffy's four-story house at No. 12.  The Real Estate Record & Builders' Guide commented "Mr. Farley will erect on the site a 2-sty building, which is to be leased to one tenant for a term of years."

The New York Times announced that Farley's projected building would have "a roof and facade entirely of glass."  While that would have been remarkable, what developed instead was no less striking.

Costing $15,000--about $375,000 today--the building made up for size in dignified elegance.  Clad entirely in polished white marble, its storefront featured a large eliptical arch; the only ornamentation being two roundels.  Above a carved wave crest band was a classically-inspired temple front, the pediment of which dictated the shapes of the unadorned openings of the top floor,  The marble cornice was, somewhat surprisingly, starkly unadorned.  The New York Times commented "It is a typical reminder of the small-shop facades on the best thoroughfares of Paris."

The little building took only about three months to build.  Farley most likely had his tenant lined up before construction even began.  On April 15, 1911 the Record & Guide announced he had leased his "2-1/2 sty marble 'doll house'" to "Moulton & Ricketts, art dealers, of Chicago and Milwaukee."

Two months later the Fine Arts Journal reported on the dealers' new home.  "It is a handsomely fitted place and the situation, a few steps from the Fifth Avenue, is in the midst of the group of art stores kept by widely known experts.  The Waldorf-Astoria, where rich people gather, stands but a few steps away.  The Chicago dealers are certainly very much alive."


James A. Farley was most likely annoyed when his tenant purchased the American business of Arthur Tooth & Sons in 1913.  The International Studio called the deal "one of the important business changes of the season in New York" and added "The New York galleries of Moulton & Ricketts have now been transferred to the premises previously occupied by Arthur Tooth & Sons at 537 Fifth Avenue."

No. 12 was leased next to Harris & Harrington, clock manufacturers and importers, who had been doing business far downtown at No. 12 Barclay Street.  The New York Times called the move "significant" and said "This is another illustration of the northward trend of all mercantile business now in the lower section of the city."

The Fifth Avenue neighborhood had been a center of art dealers for years; but would soon see the arrival of piano and organ showrooms.  Among the first to arrive would be the Vermont-based Estey Company, makers of pianos and organs.  The firm signed a lease with Farley in July 1916 and The Times noted it "will remodel the building and use it as showrooms."

As Christmas approached in 1917 the Vermont factory sent a shipment of discontinued styles to the 45th Street showroom.  An advertisement announced "They have just sent us 21 instruments which we are able to offer at reduced prices."  While the sale offered reduced prices, the instruments were still by no means inexpensive.  The lowest price for a grand piano was $550--more than $10,500 today.

Another sale took place seven months later after The Estey Company apparently rethought the advisability of managing its own showroom.   In July the firm turned over the distribution of its stock to the Frederick Loeser & Co. music stores.  The entire stock of pianos in the 45th Street store was liquidated.

Estey still held a long-term lease on the building; but it found a sub-tenant in March 1919.  An announcement in The Record & Guide entitled ""Doll House' for Restaurant" explained that Paul Fischer had leased the building from Estey Piano.  "He will alter it into a high-class restaurant and French pastry shop, to be known as 'La Maisonnette."

In reporting on the lease the journal reminded readers "The building, which was erected by James A. Farley in 1910, is one of the most unique in the midtown section.  It has a white marble facade in Colonial design and is only 16.5 feet wide.  Upon completion the builder named it the Doll House."

In 1927 at the end of Fischer's lease, George W. Gittens, president of the Estey Piano Co., purchased No. 12.  A fourth floor, set back from the cornice line, was added which became the firm's executive offices.   Then, in 1927, the building was once again converted to the Estey showrooms.  Music Trade Review announced that "A complete line of Estey pianos, including the new period models, which are very much in demand, are displayed on the three floors."

Once again, however, the Estey showrooms would be short-lived at the address.  Within a year another piano dealer, Henry J. Eilers, was operating here.  He found himself before a judge in January 1922, charged with "misrepresenting the age of a piano."

The trouble started when Mrs. Ida Littauer of Coney Island responded to an advertisement for second-hand piano.   She sent a friend, a piano teacher, to see the instrument.  According to Mrs. Littauer, the salesman told the woman that the piano was eight years old.  Mrs. Littauer put $200 down on the $750 instrument and accepted delivery.  Then a friend told her the piano was at least 41 years old.

Eilers was enraged that at what he called "repudiation."  He insisted, first, that his salesman would not have given the age as eight years "because he did not even know the serial number."  Then he pointed out "As a matter of fact, we could prove that a good piano is good for satisfactory service for, not merely a lifetime, but, with care and attention, would serve well the purchaser's grandchildren.  On the other hand a piano, even though only eight years of age, might have suffered abuse and injury from improper care and use so as to be entirely worthless."  Therefore, he said, age was not a marker of worth.

The judge agreed and dismissed Eilers's bail, saying there was insufficient evidence against him.

The victory was not enough to keep Eilers in business however.  He declared bankruptcy in 1930.  He was followed in No. 12 by the music publishing firm of G. Ricordi & Co.   The firm was founded by Giovanni Ricordi in Italy in 1808.  It opened its first branch in America in 1897 a block away at No. 14 East 43rd Street.  It was still there when it signed the lease for No. 12 West 45th Street.  The rent, $14,000 per year, would be in the neighborhood of a quarter million today.


When the building became available in 1951, it was taken by the country's oldest theatrical costuming house, Louis Guttenberg's Sons.  The firm filled all three floors with costumes which were available both for rental or sale to theatrical companies.

Established in Greenwich Village in 1869, the company moved about 100,000 costumes into the building.  Over the decades Louis Guttenberg's Sons had provided costumes for  illustrious thespians like Mary Pickford, the Barrymores, and John Drew.  So well-known was the company that in stage lingo a "Guttenberg" was any rented costume.

On August 5, 1953 The New York Times noted "It was in the Guttenberg establishment that Mack Sennett and Mr. Guttenberg devised the costuming for the Keystone cops who became identifying characters in most Sennett comedies."

Samuel Guttenberg had taken over the company with his brother William, in 1885.   Samuel retired in 1943 and William died in 1949.  Samuel's son, Harry, now ran the operation.

Samuel Guttenberg's Sons was still in the building in 1959 when costumer Ed Wittstein began work on a new off-Broadway musical, The Fantasticks.   According to authors Donald C. Farber and Robert Viagas in their 1991 The Amazing Story of The Fantasticks, Wittstein headed off to Louis Guttenbeg's Sons, which he dubbed a "wonderful attic of ancient costumes."


Perhaps not unexpectedly Pollard & Steinam's storefront, where artwork and pianos were once displayed, has been obliterated.  Today a bar and grill operates from the ground floor.  But not so expected is the slathering of gray and maroon paint over the marble facade above--a decision that prompts the often-heard exclamation "What were they thinking?"