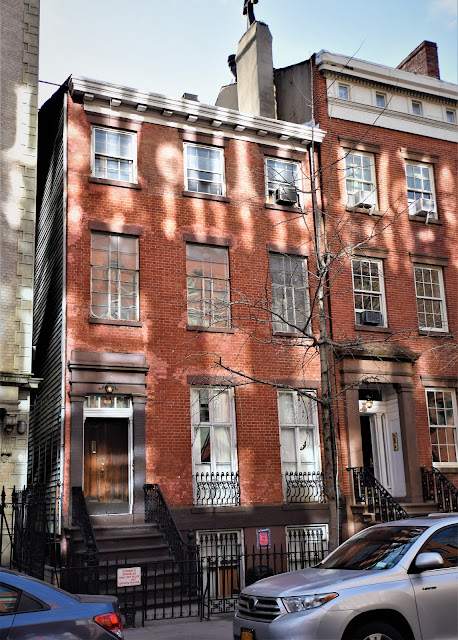 When Clement Clarke Moore inherited his family country estate, Chelsea, in 1813, it extended from what would be 19th Street to 24th Street, and from Eighth Avenue to the Hudson River.  But two years earlier the Commissioners' Plan had laid out the proposed grid of streets and avenues north of Greenwich Village, dissecting on paper Moore's bucolic estate.

In 1825 he donated his apple orchard, equaling 66 tracts of land, for the site of the General Theological Seminary.  Soon thereafter building plots were laid out as streets began appearing.

Moore's early deeds and land leases were specific in his intentions of making what originally was called  Chelsea Village respectable.  In 1829 he signed a lease with Hugh Walker for the plot at 404 West 20th, across from the Seminary site.  Walker's $40 per year lease--about $1,060 today--came with the agreement that should he erect a "good and substantial house" of two or more stories and "constructed of brick or stone, or having a brick or stone front" within seven years, Clarke would buy it at the end of the term.

Walker wasted no time in starting construction.  Completed in 1830, his 25-foot wide, two-and-a-half story wooden home was faced in Flemish bond brick as per the agreement.  A peaked roof would originally have had one or two dormers.  Sadly, if Walker lived to see his new home finished, it was only for weeks or months.  In 1830 the leasehold was transferred to his widow; who gave it up three years later to builder and real estate operator James N. Wells.

Wells had been a significant partner with Clement Clarke Moore from the first days of the development of Chelsea.  The same year that he took over the leasehold for No. 404, Don Alonzo Cushman, a friend of both men, began purchasing lots in Chelsea.  In 1835 he started construction on the long row of upscale homes abutting No. 404 and running west.

It was most likely Wells who remodeled No. 404 to match Cushman's more modern Greek Revival residences.  He cleverly copied their stone entrances in wood, raised the attic level to a full floor, and installed a bracketed cornice.

By 1852 Wells had partnered with William Roome and they established their office in No. 167 Ninth Avenue, one of three houses built in 1845 by Don Alonzo Cushman.  It was conveniently around the corner from No 404, which became the home of William and Susannah Roome.  Susannah died in the house on Wednesday, July 3, 1867 and her funeral was held in the parlor two days later.   It was perhaps her death that resulted in Wells & Roome leaving the Ninth Avenue office that year.


Following the Roomes in No. 404 was the Coffin family.  Timothy and Anna were no doubt devastated when their 13 year old daughter, Minnie, contracted "malignant scarlet fever" late in 1874.  Decades before the discover of antibiotics, there was no cure and on December 17 the teen succumbed.  Her funeral was held in the house the following Saturday morning.

Within the next decade the property was owned by Thomas Cotterell.  Interestingly, he sold it on June 1, 1886 to Ephraim Holbrook Cushman, the son of Don Alonzo Cushman, for $13,000; more than $342,000 in today's dollars.  It was either Cotterell or Cushman who gave the stoop updated Italianate ironwork and extended the parlor windows to floor level.

Victorian funerals were expected to be held in the homes of the deceased, and No. 404 was the scene of another in May 1893 following the death of 37-year old Jane Kitching.  She had died in her bed on May 1.

In the mid-1890s the house became home to the widowed Joseph E. Dixon and his daughter Lillie.  Dixon's wife, the former Elizabeth Bouvier, came from a well known Philadelphia family and was the widow of wealthy Philadelphia banker Francis A. Drexel,  Elizabeth had died in May 1884.

Several year later the New York Times, in reporting on a "picturesque gathering" held in Philadelphia in honor of Joseph, explained that Dixon "with his daughter, Miss Dixon, lived in New York for some years.  Mr. Dixon is one of the old-time Quakers, although his daughter, Miss Dixon, has joined the Roman Catholic Church."  A Philadelphia journalist added "Mr. Dixon will be well remembered by many of the older members of society as one of the most popular men of his day and a foremost leader in things musical when things musical were more of a raison d'etre for social gatherings than things gastronomic, things sartorial, or things Pactolean."

The Dixons seem to have been the first residents of No. 404 to hob-nob with the socially important.  On January 2, 1899, for instance, The New York Times mentioned that 'There have been several events of much interest to New Yorkers in Philadelphia this past week," and included among them the "entertainment for Mr. Joseph E. Dixon and Miss Lillie Dixon...given by Mrs. Andrews."

When Lillie's engagement was announced eight years later, her father had only recently died.  On October 20, 1907, The New York Times noted she would be married to Augustus Noel in St. Francis Xavier's Church.  The article mentioned "Miss Dixon has a large circle of friends," and noted she was the granddaughter of Michael Bouvier.  He was the Philadelphia cabinetmaker who fashioned furniture for customers like Joseph Bonaparte, King of Sicily and Spain (and was, incidentally, the great-great-grandfather of Jacqueline Bouvier Kennedy Onassis).

Three weeks later the newspaper added that "The wedding will be quiet, as the bride is in mourning.  She will have no bridal attendants."  Following the ceremony a wedding breakfast and informal reception were held in No. 404 West 20th Street.

With Lillie married, the Cushmans leased No. 404 to the Edward S. Van Zile family.   Van Zile was the author of a wide range of literature including fiction, non-fiction (including short stories and novels), war commentary, and a history of the early motion picture industry.  His family had come to America from Holland in the 17th century.  He graduated from Trinity College in Hartford, Connecticut in 1884 and married Mary Bulkeley in 1887.  With them in the 20th Street house were daughters Mary, Harriet Lee and Sally.  A son, Edward Bukleley Van Zile, was a freshman at Trinity College in 1908.

The first of the Van Zile daughters to leave No. 404 was Mary, whose marriage to the Rev. Gerald A. Cunningham, senior curate of St. George's Church was celebrated in Trinity Chapel on April 29, 1912.   As had been the case following Lillie Dixon's ceremony, a wedding breakfast was held in the 20th Street house.

Circumstances surrounding the wedding of Sally to Dr. Walter F. Scott of Birmingham, Alabama the following year may have been a bit more strained.   The ceremony was held in the Van Zile home and was an understated affair.  The New York Times explained "The bride-elect in a Protestant and Dr. Scott a Catholic."


By the time of the wedding Edward's mother, the former Sarah Melinda Perry, was living with the family.  The last of the Van Zile daughter weddings was that of Harriet, who married Donald L. Greenleft in Trinity Chapel in January 1917.

With her daughters grown and married Mary Van Zile turned her attention to politics and women's' rights.  By 1920 she became chairperson of the Women's Co-operative Anti-Tammany Committee, and made her opinions quite clear in an address at Cooper Union on November 9, 1921.  Among her comments was:

The men still want us to do the pink tea stunt.  They do not seem to realize that we are in politics, just as they are, for the purpose of getting votes for our party, and not to add luster to the social functions.


Edward Sims Van Zile died on May 29, 1931.  No. 404 was never divided into apartments and continued to be home to well-recognized residents.  Following the Van Ziles were William C. McNulty and his wife, Ann.  A nationally-known artist, Ann went professionally by her maiden name, Ann Brockman.


Brockman had studied under Gifford Beal and John Sloan at the Art Students League and started her career as an illustrator; later specializing in water colors.  By the time the couple moved into the 20th Street house her works were displayed in the Metropolitan Museum of Art, the Whitney Museum and the Chicago Art Institute.  The McNultys ran a summer art school in Rockport Massachusetts.  Late in 1942 Ann became ill and she died on March 30, 1943 in the Park East Hospital.  How long William remained at No. 404 is unclear, but he was gone by 1947 when newlyweds Edgar and Rosemary Villchurand two other couples pooled their money and bought the house for $6,000 (about $64,500 today).


Edgar, known as Eddie to friends, had served with the Army Air Corps in World War II.  He now turned to radio repair, opening a shop on West Fourth Street and custom-building sound systems.  Eventually his business would grow to Acoustic Research, Inc.

After the group of friends left West 20th Street, the house was home to Dr. Helen Huss Parkhurst.  A professor of philosophy since 1944, she retired from the faculty of Barnard College in 1952 after having served there since 1917.  By then she had published three books, the 1930 Beauty--An Interpretation of Art and the Imaginative Life; Cathedral: A Gothic Pilgrimage published in 1936; and her 1943 Great Books.   Dr. Parkhurst became ill in February 1959 and died two months later, on April 14 at the age of 71.

By the turn of the 21st century No. 404 West 20th Street was recognized as the oldest surviving residence in the Chelsea Historical District.  A 2015 real estate listing boasted that it "is filled with original details" and said "the moldings, staircase and handrail are all original."  While the surviving details were vintage, there was little left of the 1830 Federal elements.  Instead the remarkable veined marble mantels date from James Wells's Greek Revival re-do; and the handsome plasterwork from the Italianate updating most likely commissioned by Thomas Cotterell. 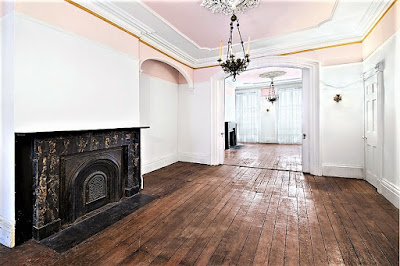 The buyer, financier and founder of the private equity firm Saffron Capital Advisors, Ltd. paid $6.5 million and immediately put his architect, William Suk, to work to plan a gut renovation.  He insisted that the house was structurally unsound and needed "significant renovation."  Community Board 4 disagreed and said in a letter to the Landmarks Preservation Commission that the planned work "is not renovation, this is demolition."

The letter said in part "The current proposal would demolish the entire house except for its street facade and do further violence to this house and to the most historically sensitive and architecturally distinguished block in Chelsea."  The plans would double the size of the house, add additional stories, and eliminate the side yard where the wooden siding is still visible.

Although the plans were modified, a public hearing in June 2016 resulted in the Landmarks Preservation Commission sending Suk back to the drawing board to scale them back again.  A spokesperson said "Suggestions included reducing the height, maintaining the ridge line of the roof and setting back the top floor." 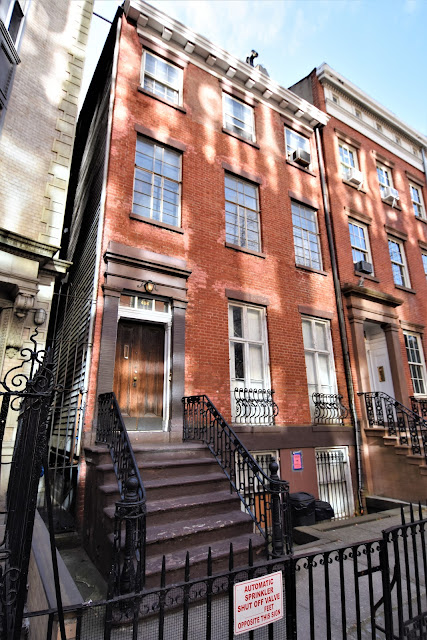 The architect promised to "fully restore the building's front facade [and rebuild] the interior frame to make it a safe and functional family resident" while preserving vintage interior elements like the mantels.

Chelsea residents and preservationists await the onset of construction and its results.