It was, as The New York Times called it in 1914, “distinctly fashionable to be married there, it was eminently respectable to be buried from there."  Here were married Rhinelanders and Gardiners. Edith Wharton walked down the aisle here. Between 1887 and 1895 there were three Astor funerals – Mrs. John Jacob Astor, William Astor and Mrs. William Waldorf Astor.

The building was designed in 1851 by Richard Upjohn who, by now, had established a lofty reputation in New York with his Church of the Ascension and the rebuilding of Trinity Church starting in 1839. The Trinity trustees called upon Upjohn to produce a northern outpost – a “chapel of ease” - as the population spread from downtown.  George Templeton Strong noted in 1848 that “The tide of uptown emigration has left the church and its present chapels almost bare of parishioners.”

Spending $30,000 on land, the church provided the architect with a plot extending from West 25th street through to West 26th Street; the scope of which he used to full advantage. Upjohn’s Gothic Revival chapel filled the site, resulting in an interior space of unusual and impressive length of nearly 180 feet. The architect was responsible for the interior decoration as well – the stained glass windows, the polychrome tile floor, intricately carved beams and knee brackets. Light-colored French Caen stone faced the walls and touches of color outlined the truss work above.

In 1866, Jacob Wrey Mould designed the enchanting Parish House in the rear at 16 West 26th Street and, in 1870 the Trinity School was erected next door. The buildings created a picturesque and romantic complex. 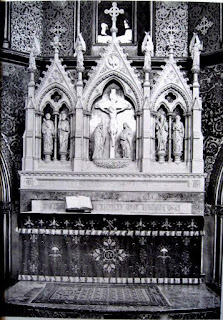 When former senator Roscoe Conkling died from exposure, having gotten lost in the Great Blizzard of 1888, the church was filled with United States Senators for his funeral. Six years later esteemed justices filled the pews at the funeral of John Jay.

In the late 19th century the interior was slightly redecorated to include color – 80 feet above the floor, a blue ceiling with gold stars was painted and the chancel walls were intricately decorated. But as the turn of the century passed and the gentry moved further up Fifth Avenue, the congregation waned. Richard Upjohn's magnificent St. Thomas Church with its breathtaking interior by John LaFarge at Fifth Avenue and 53rd Street sat conveniently among the brownstone mansions.

In 1914 it appeared that the chapel would be deserted and, quite possibly, demolished.


On January 25, Dr. William T. Manning, rector of the chapel, announced that “The population that the chapel served in the past is moving away in great numbers, and it is no longer possible to carry on efficient church work at this point.”

The New York Times reported that “Probably no tears will be shed over the abandonment of Trinity Chapel.” The newspaper was not being cruel, but frank. “For many years Trinity Chapel was the centre of parish activities and a factor in the development of social New York. But it has long survived its usefulness.”

Although The Times was not enthusiastic about the architecture, saying “it has never been regarded by architects as an interesting or attractive church structure” and projected that Upjohn “probably never thought of making a chapel so far uptown a notable architectural work;” it lamented the potential loss.


“Nevertheless, the abandonment of Trinity Chapel justifies one more sigh over the mutability of earthly things. Why must we go on year after year tearing down our famous old buildings? Are we never to cherish sacred associations?”

And yet the chapel staggered on.

With its limited income, the church made few alterations to the interior until, on April 29, 1940, fourteen murals depicting the life of Christ were dedicated. The work of Rachel M. Richardson, the paintings took ten years to complete.

Yet two years later Trinity Church finally put the building complex up for sale. In 1943 the Serbian Orthodox Church purchased it, establishing the Cathedral of Saint Sava. On March 7 of that year, Rev. Doushan J. Shoukletovich, the rector, conducted the first service for the congregation in their new home. A few years later the exiled king of Yugoslavia, would begin worshipping here.

In 1962 a beautiful oak iconostasis, carved in a Serbian monastery was installed.

Meanwhile, the Communist Party of the United States established their headquarters at 23 West 26th Street, next door to the complex. Anti-Communist terrorism resulted in no fewer than six bombings in the building between 1964 and 1972. One, on September 4, 1966, was powerful enough to blow out the 115-year-old stained glass windows in the apse of the church.

The Cathedral commissioned replacements in the Byzantine style, more appropriate to the Eastern tone of the religion. 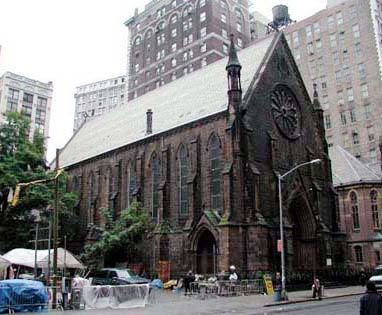 By the 1990's, the structure suffered from lack of maintenance. Serious roof leaks resulted in the dissolving of the interior Caen stone walls in some areas and the misalignment of the roof framing. Historic conservator William Stivale was hired to oversee the multi-million dollar restoration.

The Historic Properties Fund of the New York Landmarks Conservancy provided $475,000 while private donations accounted for most of the balance. 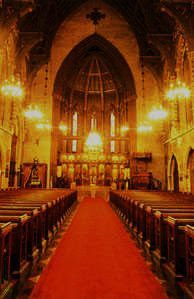 The buildings today are a remarkable collection of Gothic Revival architecture. Upjohn’s interiors are nearly untouched, despite their sometimes rocky past.

UPDATE:  The historic and priceless structure was gutted by fire on Sunday night, May 1, 2016 hours after Orthodox Easter services.