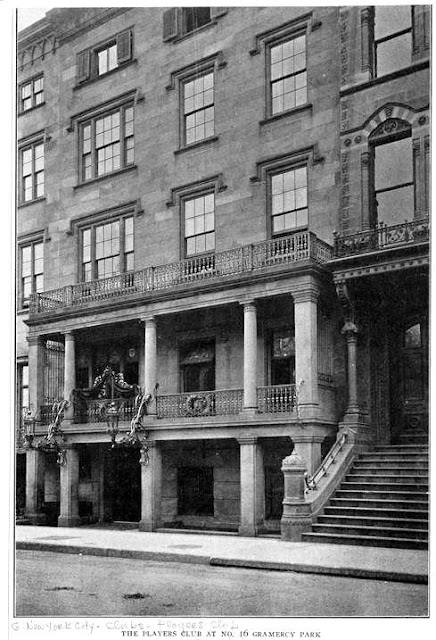 The Players in 1905
A year before the end of the Civil War, Major General Robert B. Potter stopped at his 1847 Gothic Revival brownstone residence at No. 16 Gramercy Park. There he kissed his wife good-bye before heading south in command of the 2nd Division of the 9th Army Corps.

Potter was the son of the Bishop of Philadelphia, Alonzo Potter. His brother, Henry C. Potter, would become Episcopal Bishop of New York, one of the city’s most socially prominent figures of 19th Century. Theirs was a wealthy and esteemed family with a distinguished lineage and his dignified mansion on Gramercy Park reflected his social station.

On April 2 the next year, Major General Potter was shot through the body during an assault on the rebel lines at Petersburg. He was transported back to New York where he recuperated in his Gramercy Park home.  When General Potter moved to England for a period of four years in 1869, his brother, the Honorable Clarkson Nott Potter took up residence. Clarkson Potter was a lawyer, a judge, a civil engineer, US Representative from New York State from 1869 to 1875 and President of the American Bar Association from 1881 to 1882.

It was in the Gramercy Park house that Clarkson N. Potter diedcat the age of 58 on January 23, 1882.  He willed the house to his wife, Virginia Mitchell Potter, who stayed on in the house for another six years, surrounded by neighbors with respected names like Samuel Tilden and Stuyvesant Fish.

In the meantime renowned Shakespearean actor Edwin Booth was making plans. Booth, who also owned and ran the grand marble Booth’s Theatre on 23rd Street at 6th Avenue, had suffered severe dishonor and embarrassment with his brother’s assassination of President Abraham Lincoln. The actor sought an outlet by which members of the theatre and other arts could convene to discuss the art.

Those in the acting profession were offered charity and shelter when times were hard, but they were never treated as equals among the club set. Booth established The Players, bringing together actors, managers, writers and others for the first time. Now he needed a clubhouse.

He gave the task of finding the appropriate venue to the club’s secretary, William Bispham. Accordingly, Bispham chose the Potter House. Booth purchased the house from Virginia Potter for $75,000, then had Stanford White, a Players member, renovate it as a club. 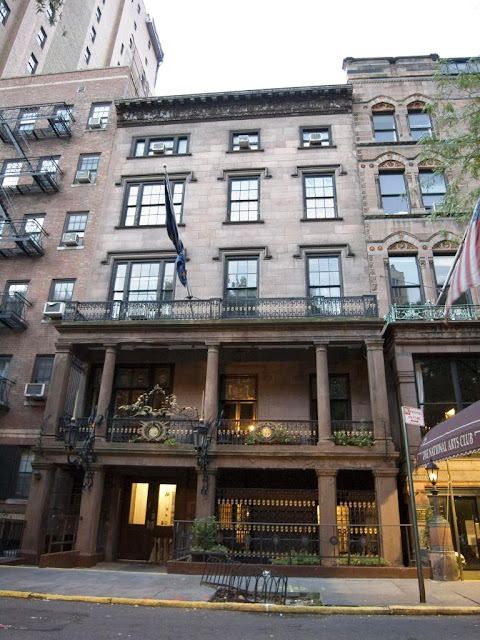 White added a two-story loggia to the front and moved the entrance door to the street level, and to the side. Ornate, wrought iron gas lamps illuminated the entrance. Entering the large vestibule, one could descend to the lower level where a bar, billiard room and kitchens were housed. Up a short flight of steps from street level was The Great Hall with large pillars and a grand marble fireplace. 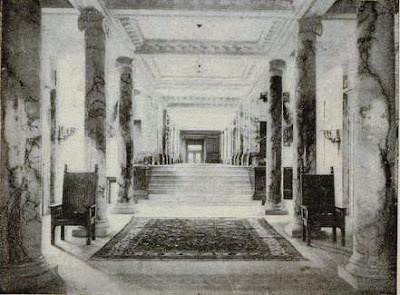 Fronting the park was the parlor and to the south was the wood-paneled dining room. The second floor housed the library, filled with theatrical memorabilia donated by Booth and other members. Edwin Booth retained the third floor as his apartments. He had the fireplace from his home in Boston installed here. A single framed photograph of his brother was the one remembrance he kept of him. 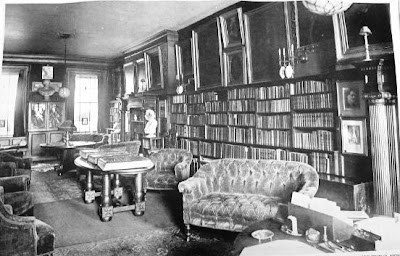 Above, on the fourth floor, were sleeping rooms for members.

The New York Times was tepid in its assessment of White’s changes. The “curious construction of the entrance way deprives it of an imposing effect. A heavy balcony juts out on a line with the first story. The entrance is in the basement, through a door in the shadow of this balcony pierced at the extreme east end of the house. 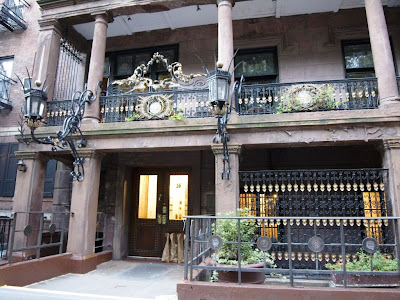 “At first glance from a distance the establishment looks more like a Turkish bath than the abiding place of a club of artists,” said the newspaper

The Times then relented, considering the practical reasons for the positioning of the entrance. “But seen near at hand, the elegance and solidity of the entrance strike you, and as soon as you enter you feel inclined to accept Mr. Stanford White’s odd doorway because its utility is at once apparent.”

At the first meeting of the club in its new home on New Year’s Eve 1881, Edwin Booth explained his goals for the house. He wanted it to be one “wherein I hope that we for many years, and our legitimate successors for a thousand generations may assemble for friendly intercourse and intellectual recreation.

“Frequent intercourse with gentlemen of other arts and professions who love the stage and appreciate the value of the drama as an aid to intellectual culture must inspire the humblest player with a reverence for his vocation as one among the first of ‘fine arts,’ which too many regard as merely a means to the gratification of vanity and selfishness. Such is the object of this club.”

The Players (the group has never used the word “Club” in its name) continues as a refuge for those involved in the theatrical business. The membership reads like a history of American theatre: Mark Twain, Lionel Barrymore, Eugene O’Neill, James Cagney, Eli Wallach, Alfred Lunt and Edward Albee among the hundreds of celebrities. When the club decided to admit women, Helen Hayes was its first female member, followed by the likes of Carol Burnett, Angela Lansbury, Rue McClanahan and Judy Collins.

Outside the gas lights still burn; among the handful of surviving gas lamps in the city. Listed on the National Register of Historic Places in 1962, the description given by The New York Times on January 1, 1882 rings true today: “The impression, indeed, that the whole house makes upon one at the first visit is one of solid comfort.”
Posted by Tom Miller at 3:50 AM